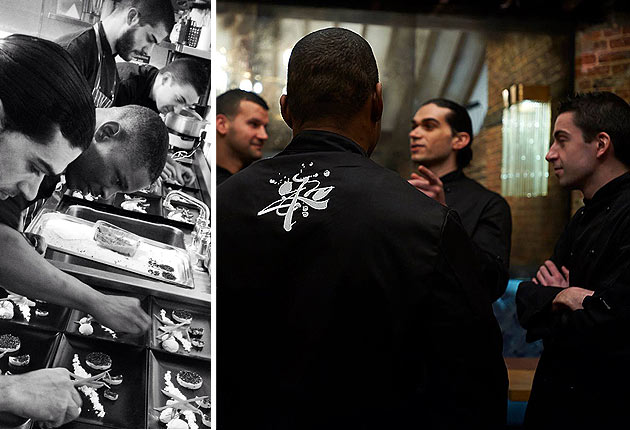 Brainchild of Kitchen Theory’s founder and Chef Patron Jozef Youssef, Kaiseki by Kitchen Theory had been hosted at the House of Wolf in Islington since February 2014. Jozef has worked at Michelin starred restaurants including Hélène Darroze at The Connaught and the Fat Duck and is author of Molecular Gastronomy at Home. For Kaiseki by Kitchen Theory Jozef has created a multi-sensory event which infuses art, an exceptional 9-course Japanese inspired experimental menu and personalised service to guide guests through a journey of duality.

Kaiseki by Kitchen Theory is in collaboration with talented artist Aerosyn-Lex Mestrovic, who works with the likes of Kanye West and Kenzo, to showcase his works of art and film throughout the dinner event. The evening commences with a screening of Aerosyn-Lex’s award winning directorial début short-film titled SCRIPTURA VITAE which was commissioned by Channel 4 and Protein London as part of the Random Acts platform. The poetic performance piece serves as the opening act and the inspiration of the multi-course experimental dinner to follow.

‘Pays des Merveilles by Kitchen Theory’ is an experimental afternoon tea. Taking the lead on this elegant and charming event is the Executive Pastry Chef Nicolas Guerin, ex Head Pastry Chef of Michelin restaurant The Square in Mayfair, London. Chef Nicolas brings his artistic and creative flair to the table alongside Chef Patron Jozef Youssef who will transform the event into a multi-sensory experience.

Pays des Merveilles translates into English as ‘Wonderland’, and it is with this spirit of excitement, humour and adventure that this latest concept has been developed. The menu will guide guests on a journey through a summer wonderland and will consist of a delectable spread of savoury canapés, a selection of open sandwiches, and a medley of masterfully crafted pastries followed by a range of bite size cakes. All of this will be served alongside your selection of artisan tea or coffee and of course the optional choice to indulge in some champagne.