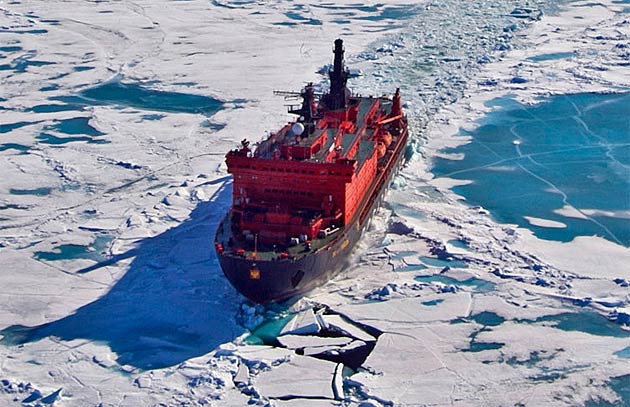 Quark Expeditions® Celebrates 50 Years of Victory Returning To Its Fleet

Quark Expeditions®, the leader in polar adventures, is celebrating the return of iconic nuclear icebreaker 50 Years of Victory to its fleet for 2016 through 2018. Quark is excited to announce that the legendary expedition ship, previously scheduled to be retired at the end of 2015, is now available for North Pole expeditions until 2018. 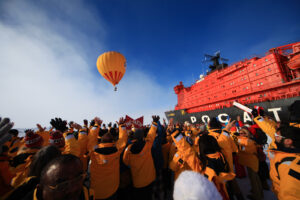 50 Years of Victory is one of the largest and most powerful nuclear icebreakers ever constructed. Earlier this year, Quark announced that 2015 would be the final season for Victory expedition voyages, due to an increased demand to return the ship to duty as an escort ship for the cargo and industrial sectors. This increased demand was due to the de-activation of icebreaker Sovetskiy Soyuz, which had been pulled from duty to undergo refurbishment and repair. With refurbishment now completed ahead of schedule and Sovetskiy Soyuz scheduled to return to sea earlier than expected, Victory is now again available for passenger voyages. Discussions with Atomflot, the Russian government-owned company that maintains the icebreakers, resulted in term agreements to allow Victory to service Quark voyages for 2016 through 2018.

“We are delighted to be able to continue our signature Victory voyages to the North Pole,” announced Andrew White, president of Quark Expeditions®. “Victory has enjoyed an almost celebrity status with Quark passengers, and we are thrilled she will continue to be such a large part of our Arctic expeditions.”

A privileged 128 passengers can travel on each 50 Years of Victory voyage to the top of the world on the 14 day The Ultimate Arctic Adventure, one of Quark Expeditions®’ most popular and highly-anticipated voyages. Heading to the North Pole, they will be some of the few travellers in the world to witness Victory’s ice-class LL1 power as it crushes through virgin ice, a voyage highlight for many.

Once at the North Pole, passengers can enjoy helicopter excursions and champagne celebrations, call home from the Quark telephone booth at 90° north, and take an optional hot air balloon ride for a true once-in-a-lifetime experience. Details of the ship and voyage are available on Quark’s North Pole video.

50 Years of Victory
Victory is a Russian Arktika-class nuclear-powered icebreaker. Arktika-class icebreakers are the largest and most powerful nuclear icebreakers ever constructed. With an ice-class LL1, Victory is designed to continuously break through ice up to 2.8 meters (9.19 feet) thick. The icebreaker is equipped with a basketball court, indoor lap pool, two saunas, a Polar library and lounge, a gym with windows, an onboard helicopter for aerial sightseeing and landings. Victory launched her maiden voyage to the North Pole with Quark Expeditions® on June 14, 2009, and in honour of the Sochi games, carried the Olympic Flame to the North Pole in October 2013. Nine months of the year, Victory is a working vessel keeping shipping lanes open for other ships.

See more of Quark Expeditions® and 50 Years of Victory below: