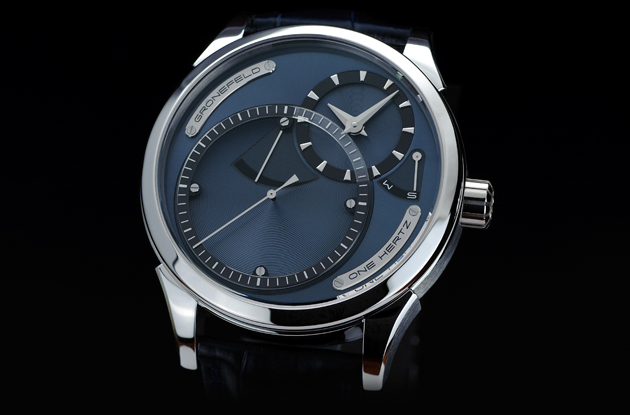 Watchmakers Tim and Bart Grönefeld are proud to present the Grönefeld One Hertz Platinum, a remarkable timepiece which sees the One Hertz – the world’s first and only production wristwatch with independent dead seconds – receive an exclusive platinum case and cool blue dial. While rare, the dead seconds complication – secondes mortes in French – does exist. However, to date dead seconds have been derived from other mechanisms, usually a constant force device or remontoir d’égalité. The One Hertz Platinum features Grönefeld’s own proprietary movement of  which all 285 parts are hand-decorated to the highest standards.

The Grönefeld One Hertz indicates hours and minutes on a sub-dial at 2 o’clock; large sub-dial for the dead seconds; power reserve indicator at 12 o’clock; and an innovative settingwinding indicator at 3 o’clock. This ensemble of indicators is all the more striking thanks to the sophisticated blue dial background, which perfectly complements the regal tones of the precious metal platinum case. The One Hertz Platinum’s setting and winding is also extremely ergonomic, selected by pushing the crown in, rather than pulling it out.Dead seconds – where the second hand advances in full steps of one second instead of an apparently smooth sweeping action – was a very respected mechanical complication until the 1980s. However, its popularity then died with the dominance of quartz movements, which also stepped in full seconds. A smooth sweeping second hand came to differentiate mechanical from quartz. With the One Hertz and its unique secondary gear train, Tim and Bart Grönefeld have resurrected this long-neglected complication and re-positioned it where the complication originated: On the pedestal of high precision.The quartz-like movement of the large second hand of the One Hertz subtly signals its unique mechanism, invisible to most, but obvious to haute horlogerie connoisseurs, who will appreciate the sublime, flawless fine-finishing of the Grönefelds’ own calibre G-02. 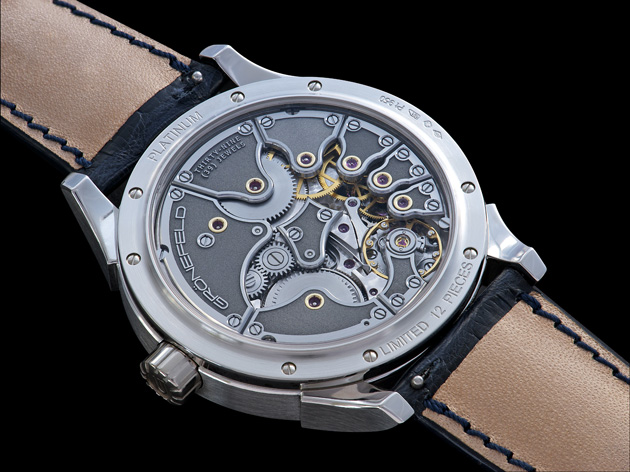 History of Dead Seconds
With the introduction of the pendulum in the 17th century, clocks finally became accurate enough to measure seconds. It was then not long before a hand indicating seconds on a long clock’s dial signified a precision timepiece. A pendulum with a period – the time to swing forward and back – of two seconds (the most common) resulted in a single tick per second.

The invention of the balance spring, which replaced the pendulum, enabled miniaturization. As portable pocket watches became more accurate, watchmakers naturally thought to copy the one-second steps of the second hand which signified a precision timepiece; however, the rapidly oscillating balance meant that it could not be directly driven as with the pendulum, so it required either a new mechanism if independent, or be driven from another complication e.g. constant force device. While pocket watches have featured independent dead seconds in the past, the Grönefeld One Hertz was the first wristwatch featuring independent dead seconds. The Grönefeld One Hertz is unique among wristwatches in that its dead seconds are powered by a secondary gear train independent of the gear train for the hour and minute indications.

One Hertz
The hertz (symbol: Hz) is the SI unit of frequency defined as the number of cycles per second of a periodic phenomenon. This SI unit is named after Heinrich Hertz. One Hertz simply means “one cycle per second”. The second (SI symbol: s), sometimes abbreviated sec., is the name of a unit of time, and is the international base unit of time. To highlight the SI seconds, the One Hertz displays dead seconds with a large seconds hand in its own dial. Hours and minutes are non-SI units of time because they do not use the decimal system so are displayed separately. Mechanical wristwatch movements often have balance frequencies of 2.5 to 5 hertz, which results in the seconds hand making tiny steps of 5 to 10 steps each second and looking like a smooth movement. The second hand of the One Hertz is either stationary (dead) or jumping in a full one-second increment each second. 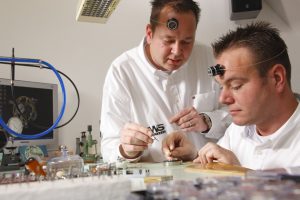 Displaying dead seconds in a wristwatch without a constant force device is no easy task. The friction of the mechanism has to be absolutely minimal so it does not interfere with the escapement.

Tim and Bart Grönefeld used an independent dead seconds mechanism that is driven from its own secondary gear train with its own power supply. The seconds are driven from one mainspring barrel and the hours and minutes from another. Friction is with this system guaranteed to an absolute minimum and the complication has no adverse influence on the escapement and free sprung balance. The two mainspring barrels are wound simultaneously from the crown, which features an innovative “push to set”, “push to wind function”, with the mode selected indicated on the dial at 3 o’clock. A power reserve indicator at the top of the dead seconds dial keeps track of the 72 hours of autonomy.