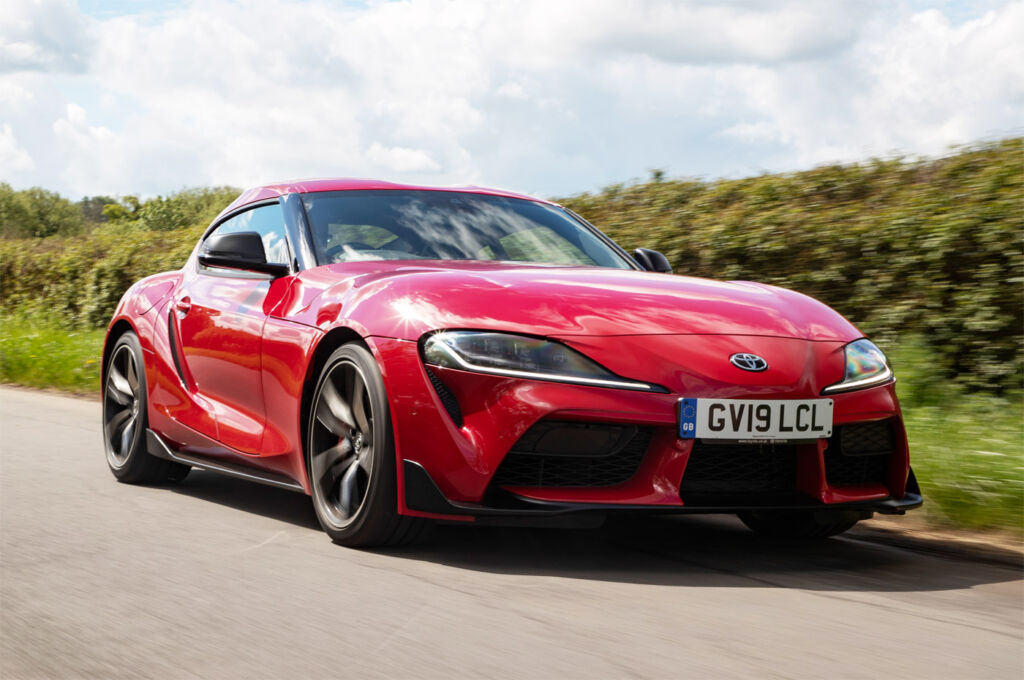 Overview
Before the new Supra came along, Toyota’s only coupé on sale was the GT86, or what’s known as the BRZ in Subaru circles. In the latest collaboration, Toyota has turned to BMW in a more discrete tie-up to bring the fifth-generation Supra to life, and has borrowed some know-how and tech from the Z4. The result is a car which revives the legendary Supra name after a 17-year absence, and follows on from the A80 which ended production in 2002. In fact, the new GR Supra (GR stands for “Gazoo Racing” – Toyota’s umbrella organisation for its global motorsports programme), has proved so popular since its European debut in March of this year, that the entire UK allocation of 300 cars for 2019 was already sold out by May. 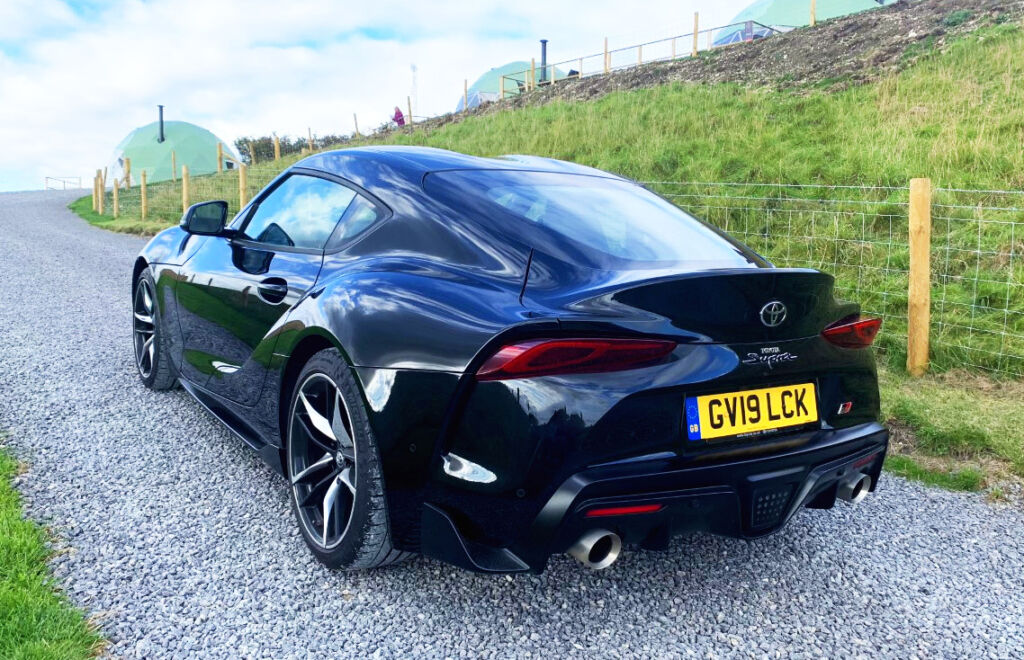 Deliveries to customers have only just started this month, but if you go on to the Toyota website right now, you’re asked to put your name down on the waiting list for the 2020 arrivals, such is the impressive level of demand (or frustrating if you’ve been longing for one).

There are two variants in the GR Supra line-up, which are namely the 3.0L and 3.0L Pro (the spec which we tested). The price starts at £52,695 OTR for the entry-level model, and from £54,000 OTR for the Pro, so there isn’t a huge difference in cost between the two. Both are rear-wheel-drive, and both are powered by the same front-mounted BMW-sourced turbocharged 3.0-litre straight-six, producing 335 hp and 500 Nm of torque. In addition, the GR shares its platform with the Z4, which makes sense, as the BMW and Toyota also run down the same Austrian production line in Graz. Interestingly, this is the first Supra to be built outside of Japan. 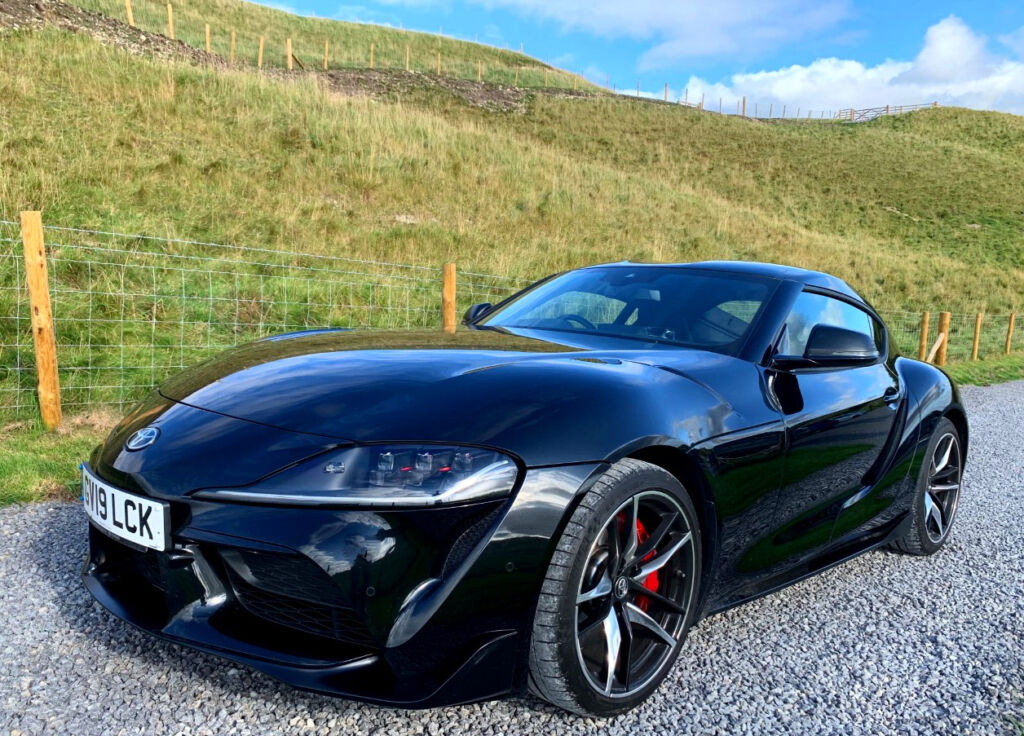 On the outside…
The exterior of the GR Supra has plenty of interesting features to keep the eyes entertained and the design was precisely calculated to achieve a perfect front/rear 50-50 weight balance. This new car does turn heads wherever you go, which is also helped by the fact that it’s currently a rare breed on UK roads, and you’re unlikely to see another one for miles around. In terms of the styling, the sweeping bonnet and “double-bubble roof” (to reduce drag) is supposedly inspired by that of the iconic Toyota 2000GT which arrived in the 1960s. The front and rear design hark back to the fourth generation Supra which appeared in The Fast and the Furious movie, and the curved nose sees the six-lens LED headlamps flanked by sizeable air intakes, which we are told are essential for engine cooling. 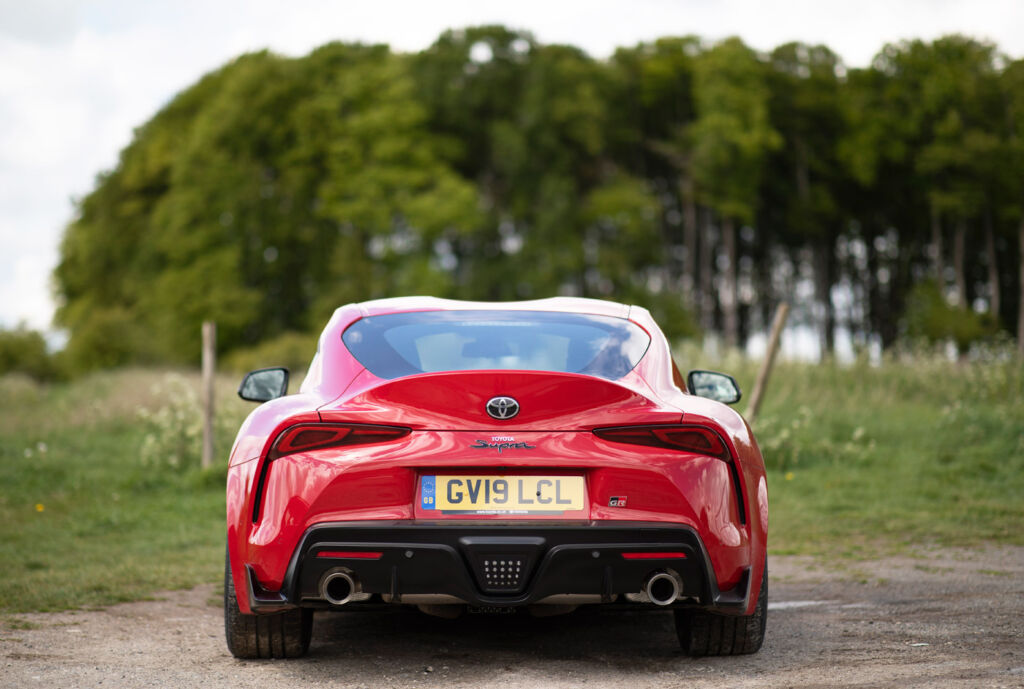 The back is one of the standout features of the Supra. There’s an integrated arched spoiler (which doesn’t lift or retract), and the way the rear is curved round on the edges is almost Riversimple Rasa-esque in its design, whilst the haunches are reminiscent of the Ferrari F12. Despite an absence of many years, the same iconic font for the Supra badge, which harks back to models gone by, furnishes the boot lid and is joined by the renowned black and red GR moniker next to the number plate. Looking downwards, there are twin exhausts, and sitting between them is a rather cool central F1-style rear light which illuminates when reversing. 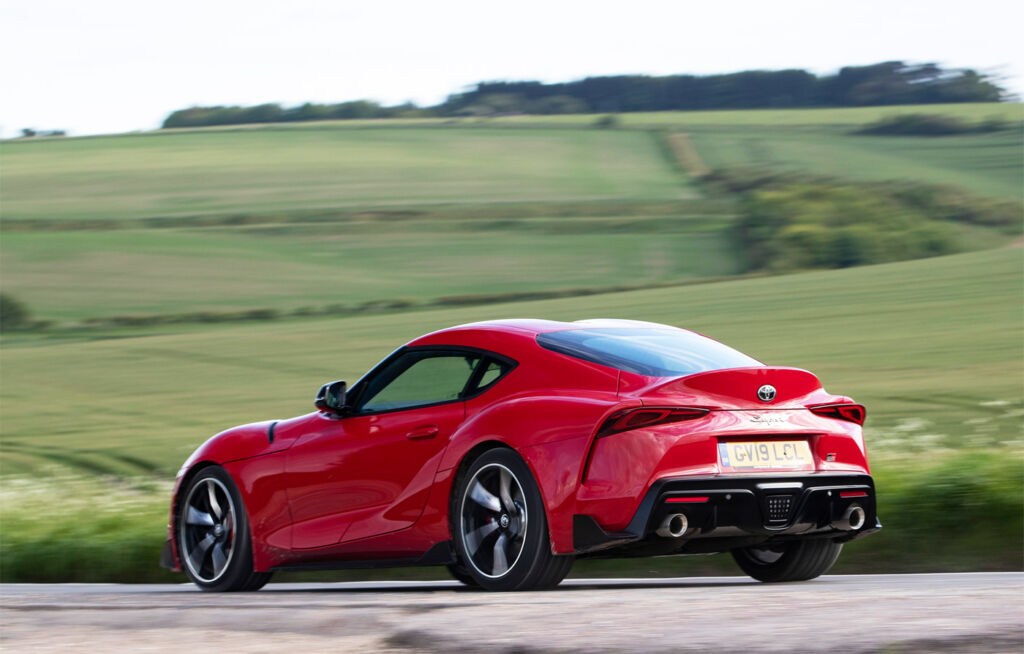 For another useful fact about the new GR Supra, the wheelbase is, in fact, shorter than that of the GT86 (at 2,470 mm), but the tyres are larger. The 19-inch lightweight forged five-spoke alloy wheels, which have alternating black and polished slim silver spokes resembling blades, come as standard on the GR Supra, with no possibility to upgrade. When it comes to choosing the colour of the bodywork, there’s two solid no-cost options and five metallic shades (including the black used for our test car), each costing £710 for the privilege.