Castle Hotel Windsor in Berkshire is the third MGallery by Sofitel property to open in the UK, following in the close footsteps of Francis Hotel Bath and Queens Hotel Cheltenham

It is brilliantly located on Windsor’s High Street, opposite Sir Christopher Wren’s Windsor Guildhall, and a few paces away from both one of the country’s most prized royal residences, Windsor Castle, and the banks of the River Thames. The hotel is steeped in history dating as far back as 1528 when it was known as “The Mermaid Inn” where they brewed cider and beer for people of the town. In the 19th century, Castle Hotel became one of the best places to stay in Windsor and even hosted the Duke of Wellington after he had claimed victory over Napoleon in the battle of Waterloo. More recently, it stood as the Mercure Castle Hotel Windsor, also part of the Accor group, before being completely refurbished for its re-launch on the 23rd September of this year. 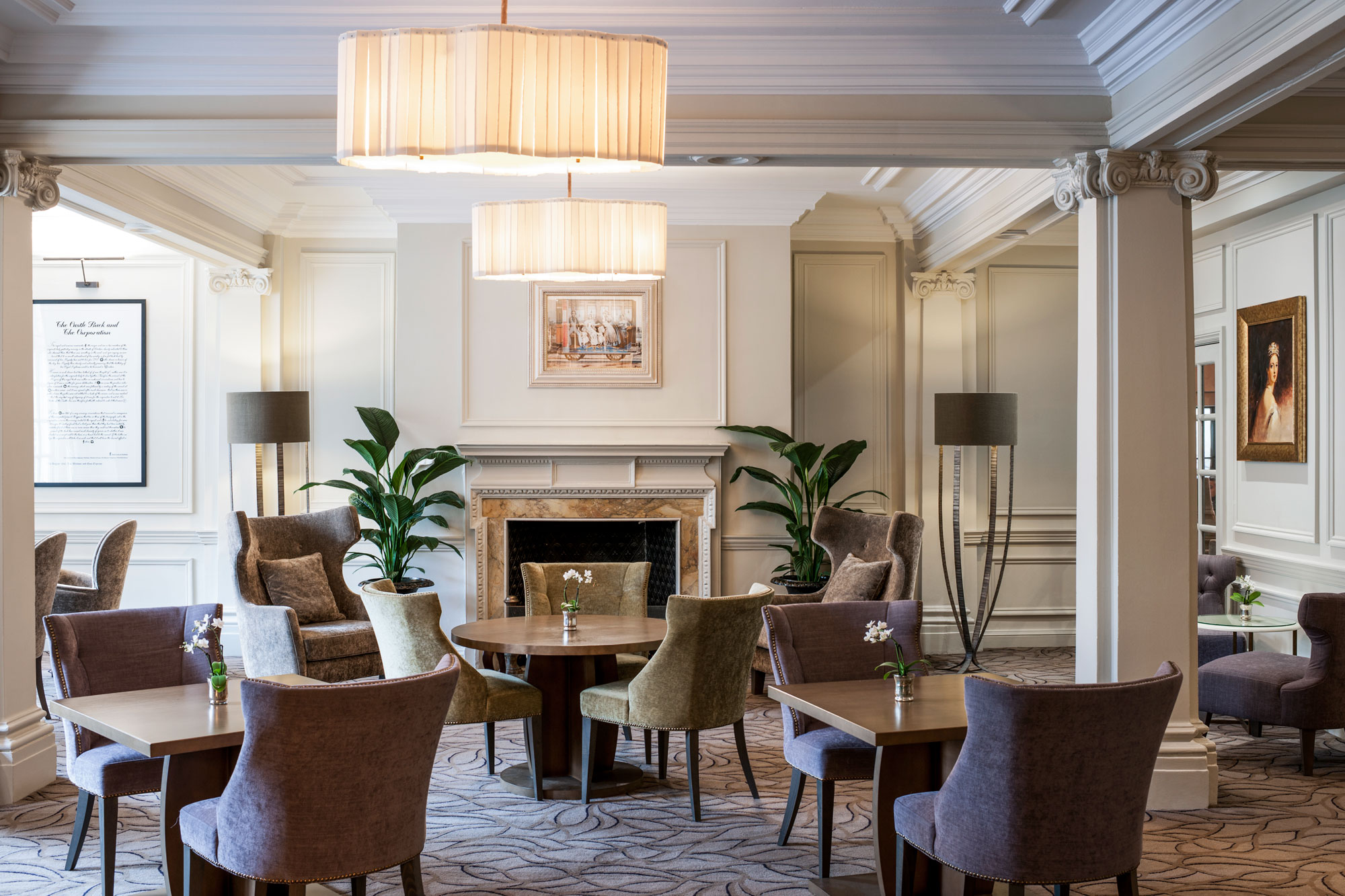 The interior décor is a mixture of classic and contemporary, and the period features of this hotel have been nicely merged with furnishings of the present. Guests are welcomed by very polite and helpful reception staff hovering above a laptop on a tall wooden table, bringing down the barrier of formality on arrival and departure. It’s easy, straightforward, and you receive your room card in a matter of minutes at check-in. For an additional £15 per overnight stay, there is on-site parking which is extremely convenient considering that the hotel is located in the centre. 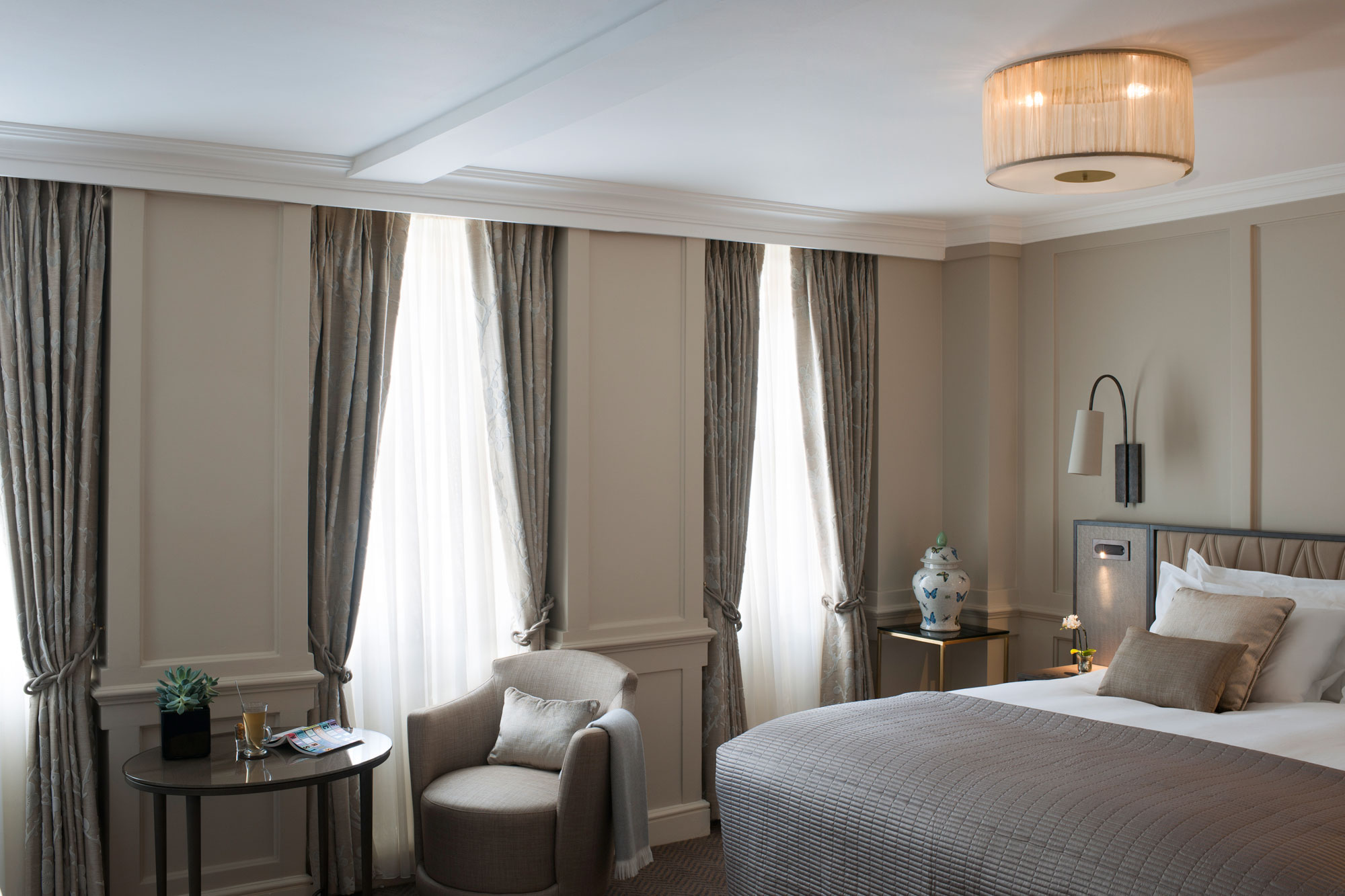 At Castle Hotel Windsor, there are 108 rooms in total including five suites, of which one became our overnight residence (costing around £220 per night for two people). It went by the name of “John Chater”, which is located in the original building on the second floor. 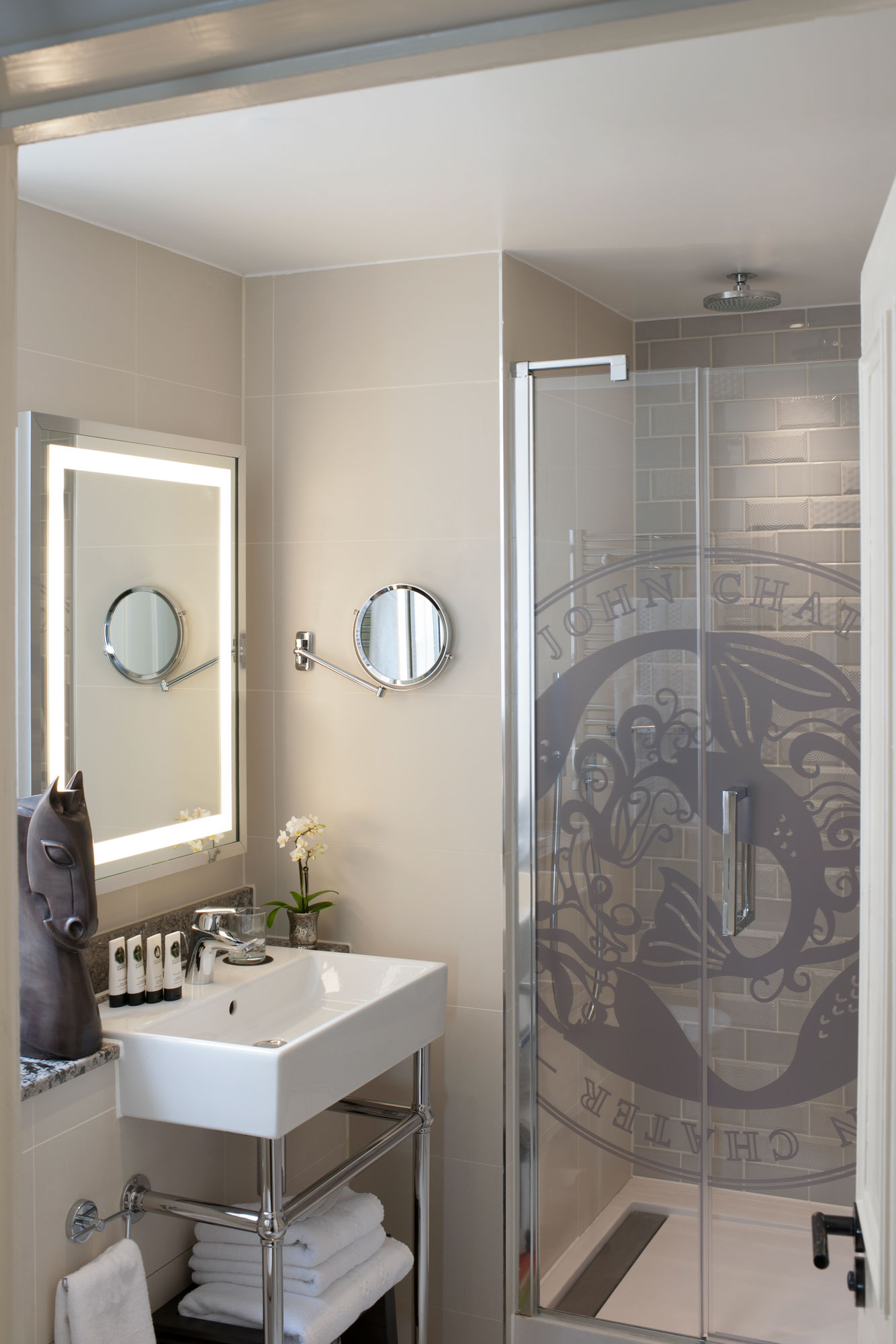 The spacious suite is divided into a living room which overlooks the High Street and features an array of soft seating, regal fixtures, a large flatscreen TV, Nespresso coffee-making facilities, and a separate minibar containing a generous helping of complimentary soft drinks. On the other side of the hallway is the master bedroom with another TV, subtle lighting, as well as a king-sized bed dressed in a crisp white duvet, and sporting fluffy gowns and slippers. Lined with fragrant hair and body accessories from Les notes de Lanvin, the ensuite bathroom is bright and airy, and offers a separate bath, and a walk-in rain and handheld shower which is emblazoned with an eye-catching John Chater insignia.

With both being push button operated, this may be just a touch too modern, as there is no possibility to adjust the intensity of the incoming water which some could find a little frustrating. 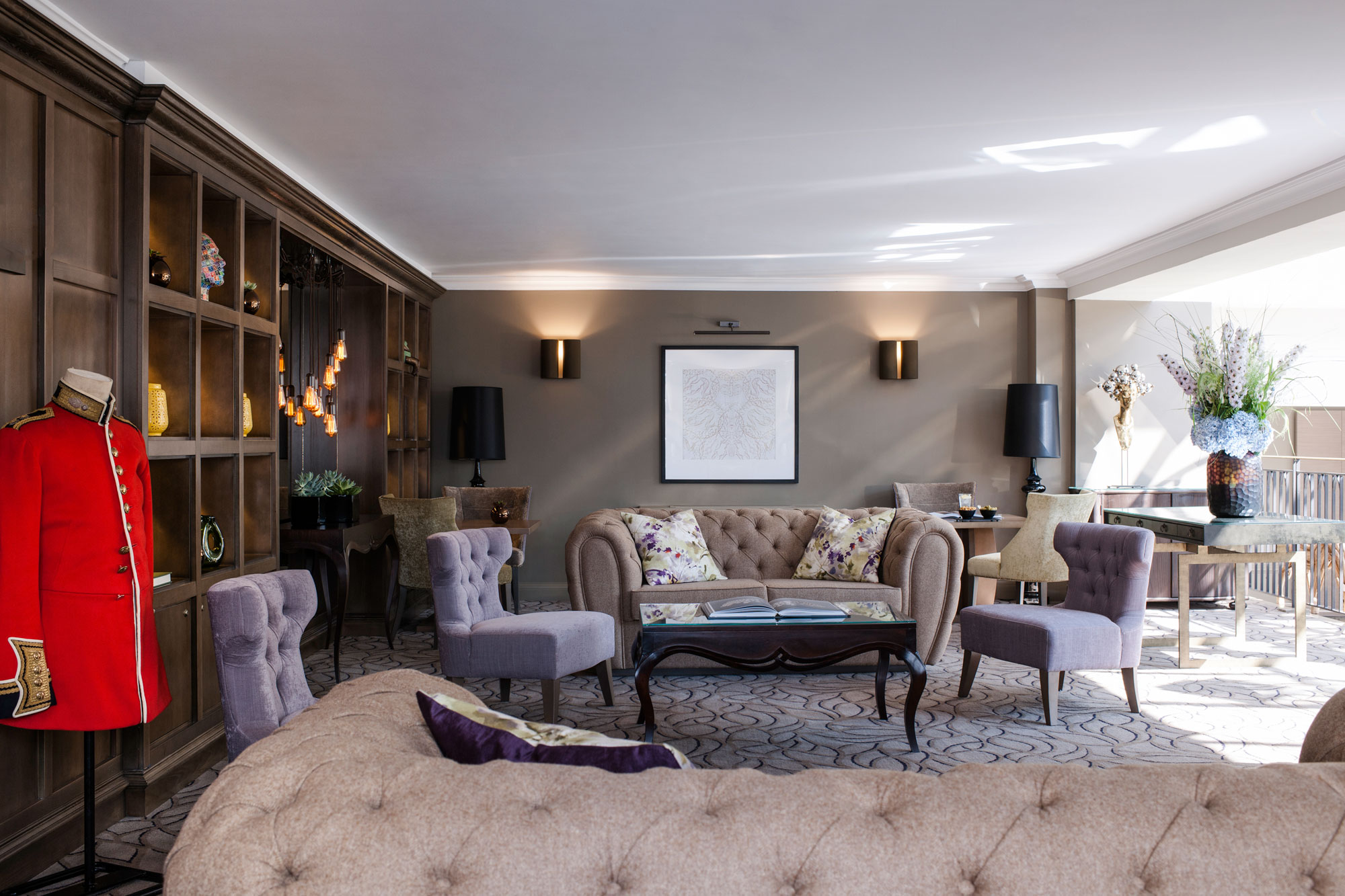 Aside from the bar and lounge, there is the quiet and relaxed 58-cover restaurant “Eighteen” which is this venue’s main eatery. It is quite a basic menu, but there is still enough to choose from to have a hearty dinner, and specific dietary requirements are catered for. For the starters, there are dishes such as beetroot tartlet, scallops, and chicken and duck liver. Accompanied by some fresh tomato, hazelnut and plain white bread, and joined by a glass of Pinot Grigio Marchesini from the extensive wine list, my dining partner and I both opted for the “soup of the day” which was a deliciously creamy and very satisfying cauliflower recipe.

Whilst we were waiting for our next dishes to emerge, our waiter treated us to some mental puzzles and a rap illustrating his origins and career ambitions, an original and memorable form of entertainment that we had certainly not experienced elsewhere. Nevertheless, the service provided was extremely attentive and efficient. 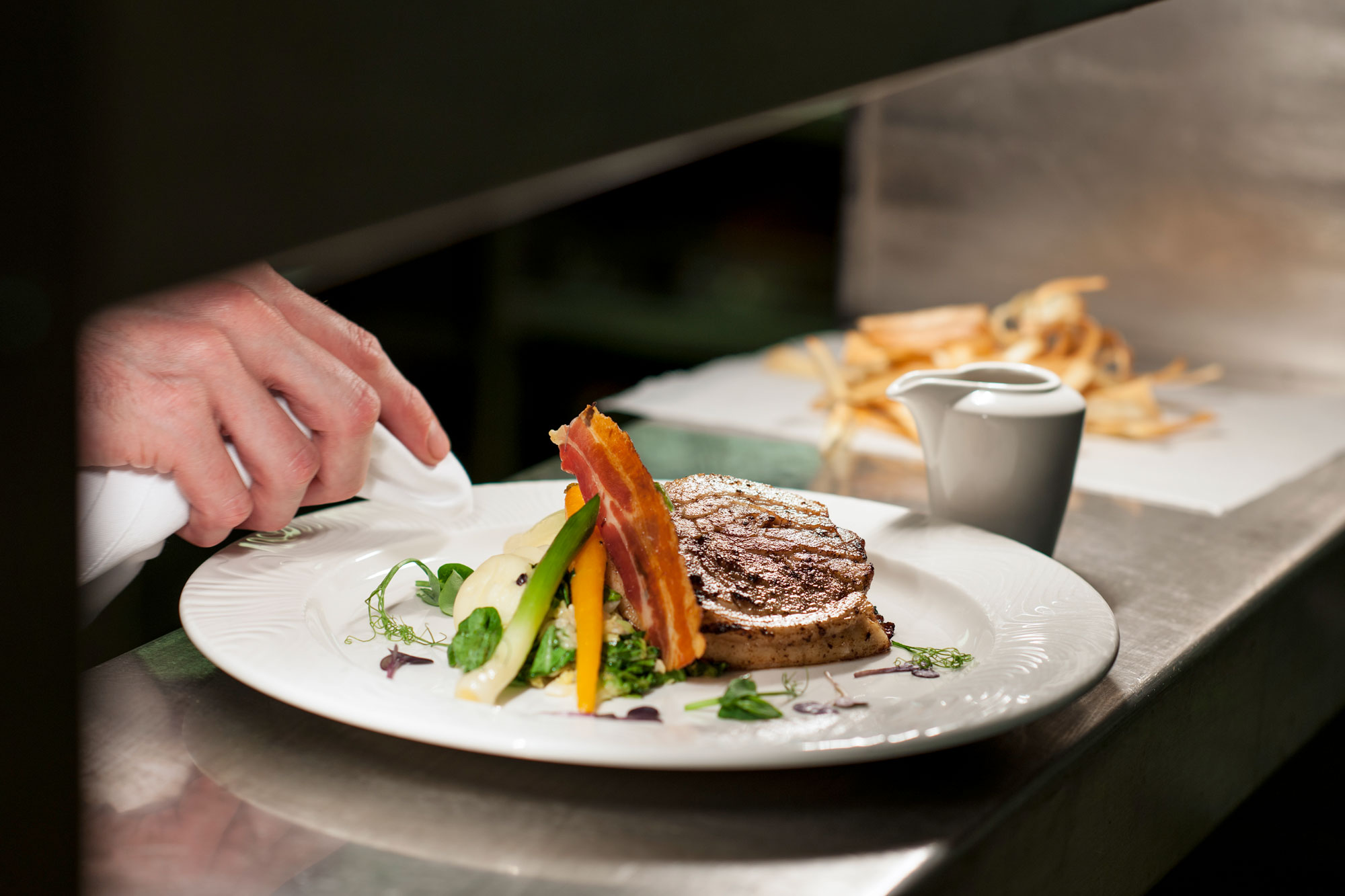 The main courses (both costing £24.95) are predominantly focused on meat and fish, and therefore, my guest chose a fillet steak with a red wine sauce, thick hand-cut chips and green beans. I had a tasty and tender roast fillet of halibut which was decorated by lightly grilled Portobello mushrooms, carrots and shallots, which I complemented with a side of smooth mashed potato. Both were very nicely presented and cooked, and we had definitely made the right decision for our meal.

Come dessert, and with a slight variation, I tried the steamed soft chocolate sponge pudding with vanilla ice cream instead of the milk sorbet. My companion chose one of the hotel’s specialities, “Wardens in Conserve”. This translated as pears in a rich spiced honey syrup which oozed with flavour and hints of cinnamon and ginger. For those who don’t have a sweet tooth and prefer something more savoury, there is a plate of British artisan cheeses with crackers, grapes and celery. 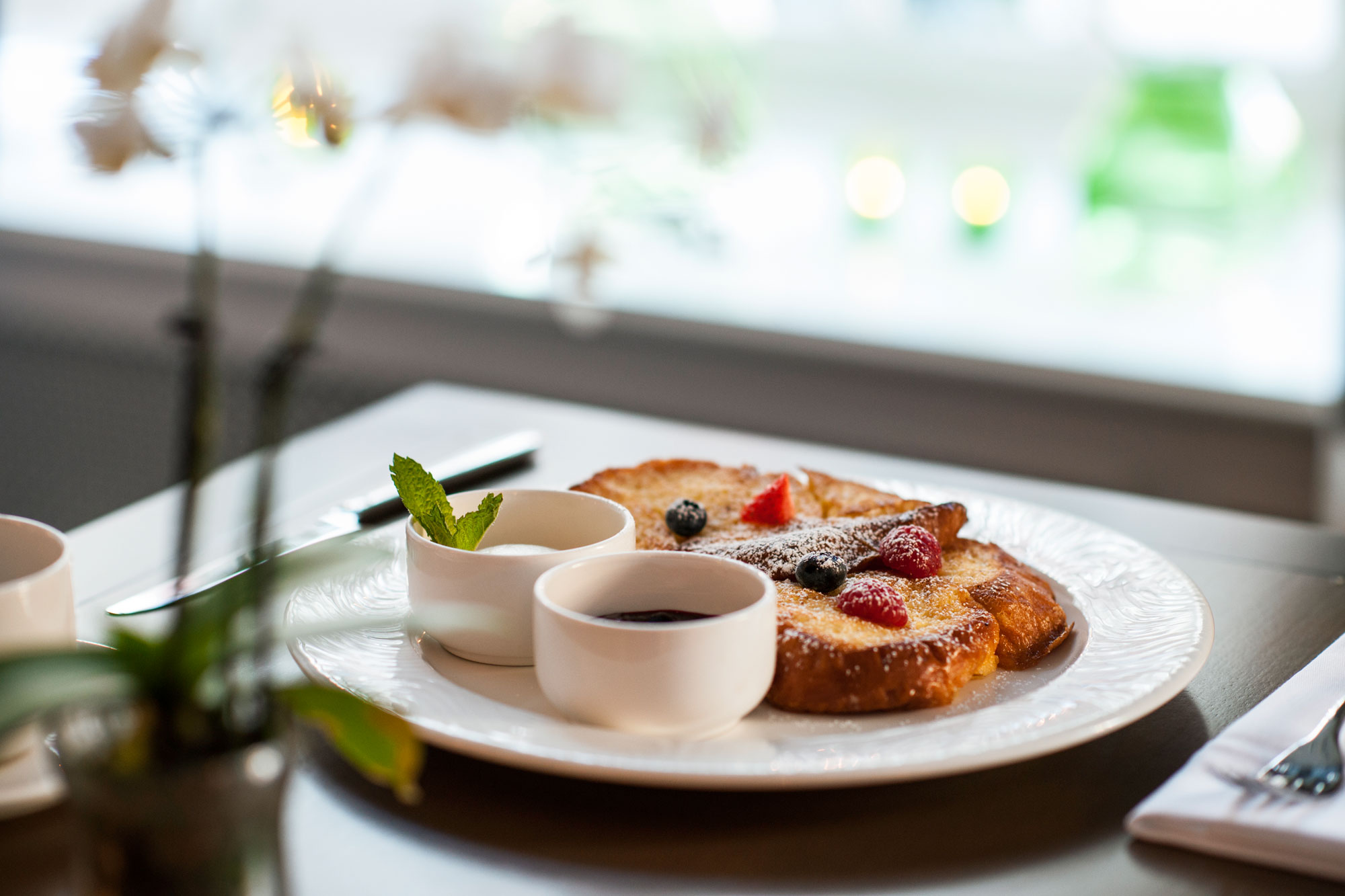 Breakfast is another opportunity to admire the picturesque setting of the town by day, and there is a meticulously arranged buffet of continental delicacies to enjoy such as pastries, fresh bread, juices, fruit, smoked salmon and cheeses, to name just a few. There is equally a small selection of hot dishes available to order on request at no additional cost, such as an omelette, eggs benedict or ‘Poor Knights of Windsor’ (eggy bread served with whipped cream and berry compote). 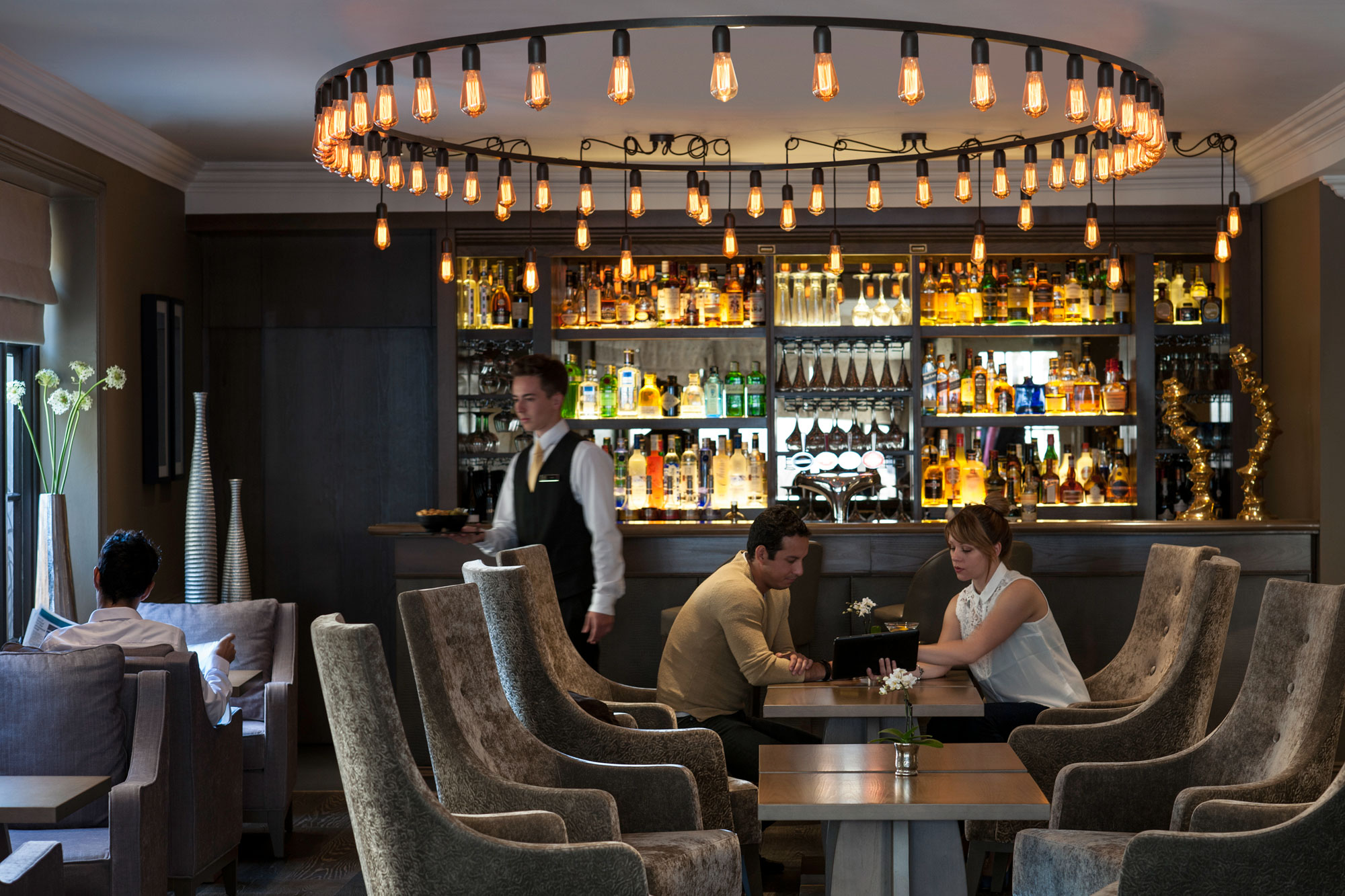 Castle Hotel Windsor is a real gem in the Windsor crown, and the recent changes have seen all the right ingredients brought together to make a stay at this property even more memorable. It boasts a great location, comfortable surroundings, and conscientious staff that would be fit to serve royalty. This luxurious property is definitely worth a look when looking to stay in the town, either for a weekend break, or a romantic getaway from the daily grind.

Castle Hotel Windsor – Where and How?