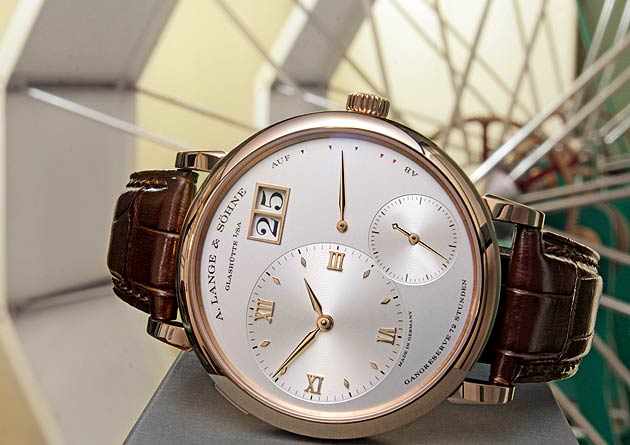 The Five-Minute Clock above the stage of the Semper Opera House in Dresden represents a high point of Saxon clock making artistry. 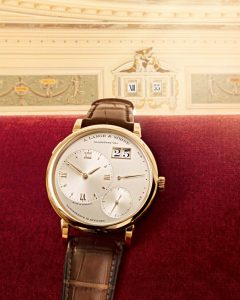 Its digital indication was revolutionary at the time, and has been indicating the exact time – visible even from the back row – during all performances of musical masterpieces since 1841. About 150 years later, it inspired A. Lange & Söhne in the creation of another world premiere: The Lange 1, with the first ever outsize date indication in a series-production watch. The Lange outsize date is also a characteristic feature of the new A. Lange & Söhne Grand Lange 1, which is about to come onto the market, providing a good opportunity to revisit the history behind the famous twin apertures.

“A clock that can be read clearly from all seats” – This was what King Frederick Augustus II of Saxony ordered to be built for the auditorium of his new court opera house. 150 years ago, the royal command resulted in a timepiece that is extraordinary in every respect: The Five-Minute Clock of the Semper Opera House. The ground-breaking design was the work of the Dresden clock maker Johann Christian Friedrich Gutkaes, genius apprentice-master and mentor to Ferdinand A. Lange. Together they created one of the world’s first digital clocks.

The idea was born out of necessity. There was very little space available above the proscenium arch. A round dial would not have provided the required legibility in the darkened auditorium. It was therefore decided to create a structure without precedent, involving two counter-rotating drums. In a magnificently decorated double aperture high above the stage, they show the hours and the minutes, the latter in intervals of five. The clock was a huge success, and gave Ferdinand A. Lange the courage to take the even bolder step of setting up his own manufacture.

A century and a half later, the double aperture with the large numbers was to celebrate a brilliant “comeback”. As the first outsize date in a series-production watch, it was positioned at the top on the right among the off-centre displays of the Lange 1 dial. With its striking design it soon became the face of the brand, creating an important chapter in the history of A. Lange & Söhne. Today, it is undoubtedly regarded as one of the classic watches of the 20th century. 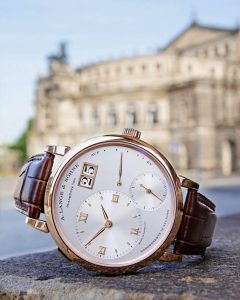 With the A. Lange & Söhne Grand Lange 1, the move­ment has been a totally re­developed to provide a pleasingly flat design. With a diameter of 40.9 milli­metres, the case (available in rose and yellow gold or platinum) is only 8.8 millimetres high, provi­ding an extremely harmonious ratio of width to height. In addition it has been possible to transfer the precisely balanced dial arrangement of the Lange 1 to the larger model without any overlapping. The impor­tance the Lange product developers attach to the principle of fidelity of scale is demonstrated even in the smallest details: The Lange outsize date, the hands and even the solid gold appliques have been increased in the same propor­tion as the case.

Although the height of the movement is only 4.7 millimetres, the A. Lange & Söhne Grand Lange 1 has an impressive power reserve of 72 hours. To save space, the movement has only one barrel. Inside the elaborately hand-decorated and twice-assembled Lange manufacture calibre L095.1, a balance spring made in-house ensures maximum precision.