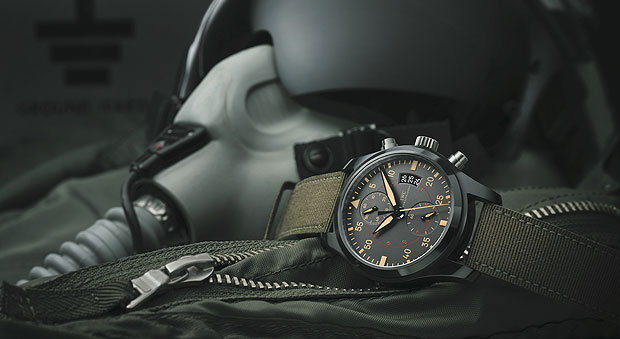 IWC Schaffhausen’s tribute to the supermen of the skies.

Heading up the professional Pilot’s Watches from IWC Schaffhausen is the new 2012 Top Gun collection. And in the vanguard is the new Miramar line: a tribute to the birthplace of the Top Gun legend in California.

The pilots who pass out from the United States Navy Fighter Weapons School in Fallon, Nevada, are part of the world’s flying elite. Their insignia: Top Gun. Top Gun is also the name of an IWC watch collection offering the very best in mechanical watchmaking today. And in 2012, five new 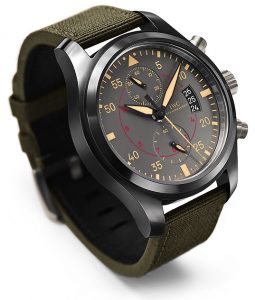 models will be taking off. Three of them feature the classical Top Gun design, recognizable from the instrument look of the dial and the attractive mix of materials consisting of ceramic for the case, titanium for the push-buttons and crown, as well as the soft strap material. They are joined by two timepieces in the new TOP GUN Miramar line. The design of the case and dial was inspired by old observer’s watches. The most conspicuous visual features are the shimmering metallic grey of the ceramic case and the rugged green textile strap.

The Big Pilot’s Watch Top Gun (Ref. 501901) combines the clear-cut instrument look of the 1940s with ultra-modern watch technology from the 21st century. Fully wound, the IWC-manufactured 51111-calibre movement consisting of 311 components will keep the movement running for 7 days. And if it is not already clear, the Top Gun insignia on the case back says it all: the Big Pilot’s Watch has entered the age of supersonic flight. The Big Pilot’s Watch TOP GUN Miramar (Ref. 501902) incorporates precisely the same technical features but comes in three colours: matte grey, beige and green: in design terms a first for IWC. The ideal choice for complex airborne manoeuvres is the Pilot’s Watch Chronograph Top Gun (Ref. 388001) with protection against magnetic fields and a glass secured against drops in pressure. And with the IWC-manufactured 89365-calibre movement, it is equally impressive on the inside. With the same specifications, the Pilot’s Watch Chronograph Top Gun Miramar (Ref. 388002) features the new design and is equally “airworthy”.

No less impressive is the Big Pilot’s Watch Perpetual Calendar Top Gun (Ref. 502902), with a wealth of complex technological features that include a perpetual calendar with four-digit year display, moon phase display and 7-day power reserve. Working away inside the black ceramic case is one of IWC’s largest and most efficient automatic winding systems. Asking the ultimate of man and machine The Edition Top Gun has held a permanent place in IWC’s Pilot’s Watch family since 2007. It takes its name from a special training course offered by the United States Navy Fighter Weapons School, the “Strike Fighter Tactics Instructor”, better known by the legendary accolade “Top Gun”. Pilots who successfully complete this course are part of a tiny elite comprising the best trained, fastest reacting and most courageous of their breed. The technology used is state of the art. Within the space of a few seconds, the jets reach their take-off speed of just under 300 km/h. During training flights above the endless deserts of Nevada, they hurtle through the air at up to twice the speed of sound. 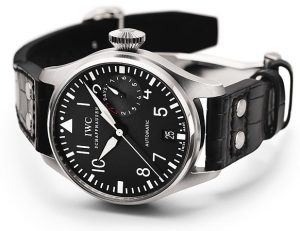 As exacting as the demands placed on the young pilots, they are no less stringent than those placed on the equipment. The quality standards required of a watch designed for flying are formidable, and IWC Schaffhausen swears by two materials that it was the first to use in watchmaking worldwide: high-tech ceramic for the case and titanium for the crown and controls. The zirconium oxide case is sintered at 2,000 degrees Celsius and machined with diamond tools. It is also nonmagnetic, acidresistant, light and, like titanium, very skinfriendly. IWC introduced titanium to watch casemaking while working with Porsche Design. Both companies were forerunners in the machining of this high-tech material, which is corrosionresistant and tougher than steel but weighs only about half as much.

During dogfights – air-to-air combat calling for spectacular manoeuvres that any pilot must master – both man and material are subject to enormous g-forces. The cockpit occupant briefly undergoes the equivalent of up to nine times the acceleration of gravity. He is pushed back forcefully into his seat: his body contorts and even his watch presses deeply into his wrist. During regular centrifuge sessions, the pilots have to tolerate 9 g for 15 seconds, which seems like an eternity, without losing consciousness, as their own weight increases to around 600 kilograms. In a similar test with a centrifugal accelerator, IWC Pilot’s Watches have withstood forces of up to 30 g for minutes at a time. So what possible use could that be? Generally speaking, none at all. But when the ejector seat is used, it generates forces of up to 20 g and the Pilot’s Watch designers in Schaffhausen think like the Top Gun instructors in Fallon: it’s better to be safe than sorry.