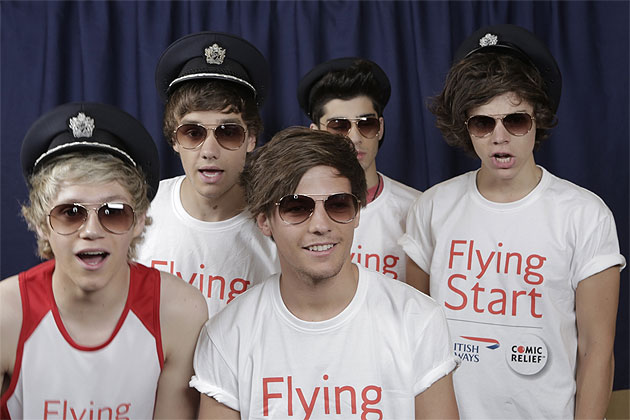 One of the world’s biggest bands One Direction will host the ultimate high-flying dinner date on a British Airways jet over London on July 21.

The fab five, Harry Styles, Liam Payne, Louis Tomlinson, Niall Horan and Zayn Malik, will take to the skies to help raise funds for Comic Relief. The charter flight will be given the original flight number BA1D.

At least half of the proceeds from the text-to-win competition will go to Flying Start, British Airways’ global charity partnership with Comic Relief, and there is also a free-to-enter competition.

Each of the eight winners will be able to take two guests on the hour-long flight, enjoy lunch on board, chat with the band and have photographs taken with them. At least one passenger in the group must be 18 years of age or older.

The flight plan is a closely guarded secret and winners will be met in central London and taken to an undisclosed airport to board the aircraft. They will be taken back to the meeting point after the flight.

Mary Barry, British Airways community investment manager, said: “We are absolutely thrilled to team up with One Direction for this fantastic competition and we’re so grateful to them for giving us this chance to raise lots of money for Flying Start.

“This really is a money-can’t-buy opportunity and a dream come true for eight very lucky fans.”

To enter fans need to answer a simple question. They then text the word “BA1D” followed by their answer A, B or C to 82272. Texts are charged at £3 plus the standard network charge and there is a limit of three entries per person. At least half of the money from each text will be donated to Comic Relief. British Airways will not make any money from this competition.

Money raised from the competition will be spent by Comic Relief to help children living unimaginably tough lives both here in the UK and across the world’s poorest countries.