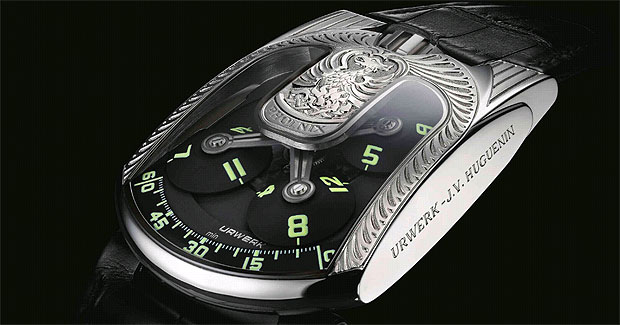 The very last URWERK UR-103 – UR-103 Phoenix. End of 2010, URWERK stopped production of the UR-103, their landmark timepiece. Especially for Only Watch 2011, the UR-103 rises from the ashes with the pièce unique UR-103 Phoenix. Very fine and unique, futuristic, rectangular, sculpted, water-resistant, 18K white gold and titanium wristwatch with digital time indicated by orbiting hour satellites, control board, power reserve indication and a 18K white gold URWERK buckle. Accompanied by fitted box and Certificate.

Case: 18K white gold, two-body, solid, polished with fluted front, “Urwerk /Jean-Vincent Huguenin” hand-engraved on case and bezel with a phoenix motif and the word “Phoenix”. Caseback in titanium with 4 screws and control board, featuring a fine-tuning screw (fast/slow) and subsidiary dials for the 36-hour up-and-down indication as well as the 15-minute and seconds to set time precisely, oversized winding crown at 12, sapphire crystals.

Dial: The orbital cross carries the four hoursatellites and an internal Maltese cross governs each of these satellites. The time is indicated by the orbiting hour satellites as they pass the arc of the minutes.

About Urwerk
URWERK was born from a meeting in 1995 between two brothers, Felix and Thomas Baumgartner, both gifted watchmakers, and friend Martin Frei, a talented artist and designer. These young men were united by their common passion for measuring and portraying time. A long discussion, a sharing of philosophies and dreams, culminated in a decision to create their own vision of time.

Martin Frei sketched and honed the design of the timepiece while the Baumgartners spent the next two years developing the technical aspects of the movement and complication. Inspired by the 17 century Campanus Night clock, the team aimed to distil timekeeping to its very essence, to calm the perception of time by removing all extraneous indications and distractions.

While searching for a name to formalise their new collaboration, two principle references soon became apparent:

UR. The city of Ur was the very place where our perception of time was molded over 6000 years ago by the moving shadows cast by the obelisks of Ur. These giant sundials unveiled the mysteries of the earth’s movement through space. The Sumerians, the people of Ur, declared that the passage of these shadows through the course of one year should be partitioned into12 units, thus laying the foundation for a system of timekeeping which has endured to this day.

URWERK SA was launched in 1995 with one overriding aim: to follow nobody but to create their own path in pushing the boundaries of haute horlogerie ever further.