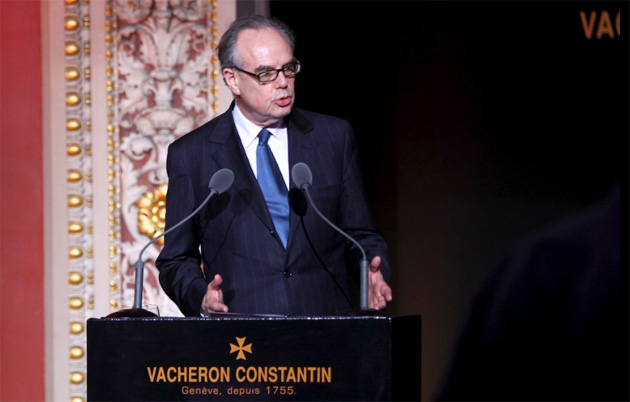 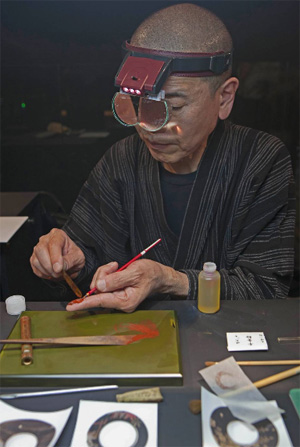 The theme of the “Mémoires d’Avenir” exhibition was the duty to pass on knowledge and expertise, a value deeply treasured by the Manufacture Vacheron Constantin. Ten or so master artists and their apprentices were present, including an architectural glassworker, a tortoiseshell artist, a heraldic engraver, and a feather artist. The Manufacture Vacheron Constantin was represented by a master gemsetter accompanied by his apprentice, and by two master guillocheurs.

Within the context of this exhibition, Vacheron Constantin also provided a first public viewing of the three timepieces in the Métiers d’Art Les Univers Infinis series, uniting the work of enamellers, gemsetters, engravers and guillocheurs. This collection is inspired by the work of Dutch artist Maurits Cornelis Escher and the periodic paving technique known as “tessellation”.

This evening preceded three days during which the numerous master artists opened their workshops to visitors wishing to discover sometimes little-known and original skills. Marc Guten took the opportunity to thank the master artists for “their passions and their generosity which daily contribute to keeping an immensely rich heritage alive, thereby contributing to spreading the reputation and ensuring the continuity of sometimes centuries-old skills”.

The following day, in Milan’s Palazzo Morando, the “Capi d’Opera” exhibition paid tribute to the excellence of the Artistic Crafts exercised in the Lombardy
region of Italy.

Visitors were able to admire over thirty crafts including those of leather worker, luthier and lacemaker, to discover the “Atelier Forte” and its design combining architecture, carpentry and sculpture, and admire the magnificent paper and cardboard dress made by Caterina Crepax and the fabulous gown created by designer Mila Schön.

The Manufacture was associated with the event and represented by a master lacquer artist from the Zôhiko company with which it collaborated in “La
Symbolique des Laques” collection. The event also provided an opportunity to present the third set in this collection.

At these two inaugurations in Paris and Milan, the Manufacture Vacheron Constantin announced the launch of a new initiative on behalf of artistic crafts: Le Cercle 250, an international circle of corporate patrons. This circle will be composed of companies that have been continuously operation for over 250 years, who perpetuate and promote exclusive skills by preserving and producing skilfully crafted products.

“We are therefore launching an appeal this evening for all eligible companies and those who share with us these cherished values in the field of artistic crafts to join us in Le Cercle 250. In his preface to his famous encyclopaedia, Diderot wrote that ‘It is perhaps in artisans that one finds the most admirable proof of the sagacity of the human mind, of its patience and of its resources’. This is a vision that we still share today. We sincerely trust that this first edition will be perceived as a call that we hope will encourage broader mobilisation next year”, said Julien Marchenoir during his speech.