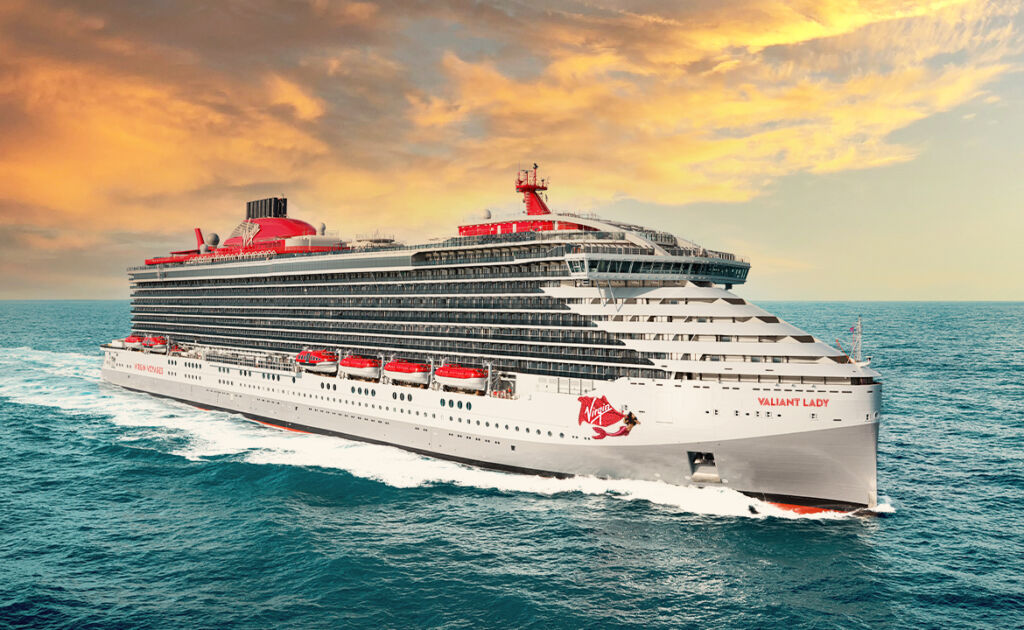 If you’re a cruise virgin because you believe they are just for the mature traveller, you may want to think again. Virgin Voyages are doing things differently. With the launch of their second of four ships, Valiant Lady, Luxurious Magazine’s Deputy Editor Sabi Phagura jumped on board to get the full experience.

Greeted by a chorus of ‘Ahoy Sailors’ as my mother and I entered the ship was a sure sign that we were entering a different world on the waves. Named after the Latin word ‘Valere’ and from the French origin ‘Vaillant’, meaning bold, strong and courageous, the ship champions women in leading the way in the maritime industry. Checking in was fuss-free and quick.

Instead of a cabin card, we were given what the crew called ‘The Band’, which resembles a friendship bracelet. Made from plastic fished from the ocean, the bands’ grey plastic fob doubles up as the mechanism to unlock your cabin door as well as a ‘debit card’ for onboard purchases. We were also advised to download the Virgin App, from where we could book just about everything on board, including dining reservations, shows, gym classes and other activities around the ship. 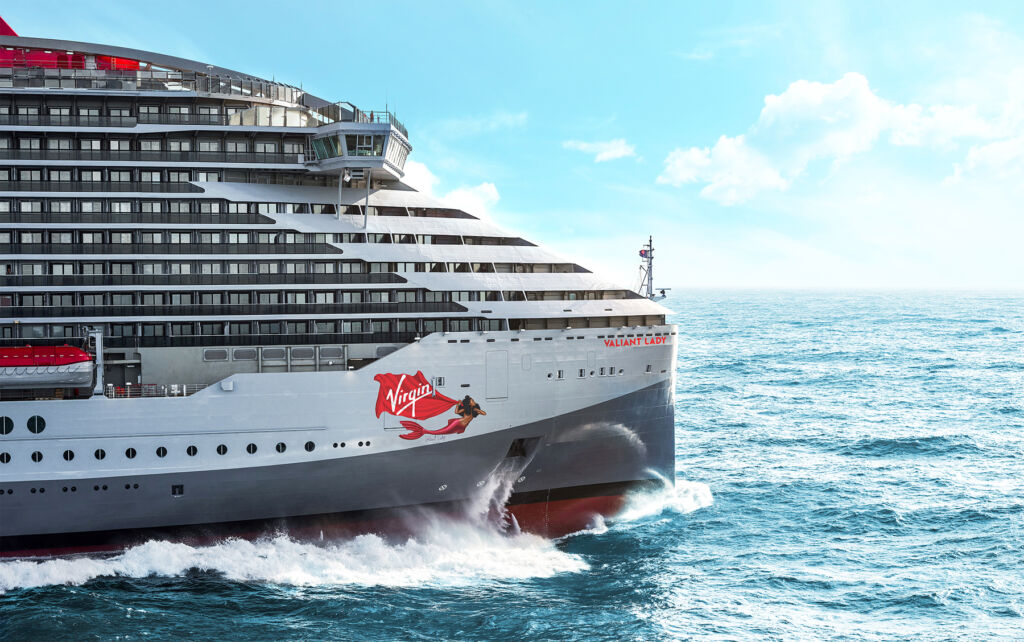 Unlike other cruises I’ve been on, Valiant Lady is a nod to a contemporary way of sailing and is shaking up the cruise industry in a similar fashion to what Virgin Atlantic Upper Class did for the aviation industry. For a start, like her sister inaugural ship Scarlet Lady, Valiant Lady is for adults only (you can, of course, unleash your inner child), they’ve ditched the traditional buffet in The Gallery; tips are included in the fare, basic drinks and all food is included with no extra fee restaurants. And if that isn’t a break from traditional cruising, it features the first-ever tattoo parlour at sea. 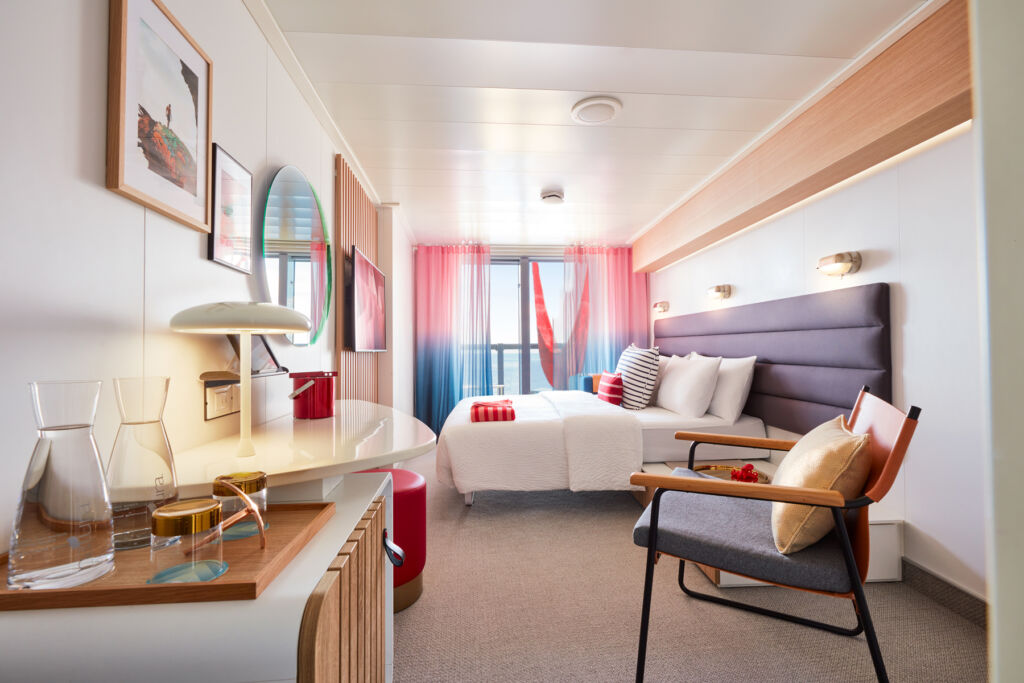 The Design
The majority (86 per cent) of the cabins have balconies, and 93 per cent offer ocean views. Although our cabin was a comfortable size, the bathroom was too cramped for my liking. But the powerful overhead rain shower made up for that.

I particularly liked the matching mood lights, the configurable seabed and the hand-woven hammock on the balcony. I never thought I needed a hammock on my balcony until I sat on this one. Oh, and if you’re big on saving energy, you’ll be pleased to know there are motion sensors that switch the lights off and draw the curtains when no movement is detected. 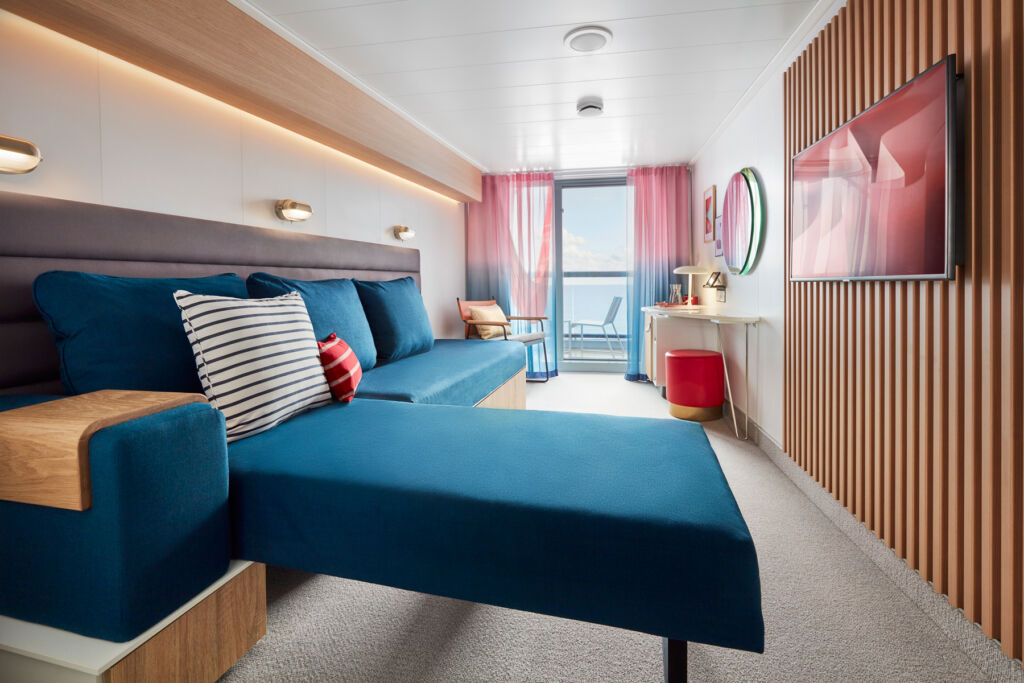 Virgin Voyages deliberately chose architects to work on the ship who had no prior cruise design industry. They brought in ten land-based architects to help create spaces that were more akin to hotels than cruises—a job well done, in my opinion. The hangouts in every nook and cranny of the ship felt exclusive and unique. Furthermore, the ship’s construction can be seen throughout the vessel with metallic bars on the walls.

They bear numbers indicating the vessel’s structural frame lines, where the cabins get their number from. It’s a clever design, but as the frame lines appear on both sides, cruisers need to pay attention to whether they are on the A or Z side of the ship. 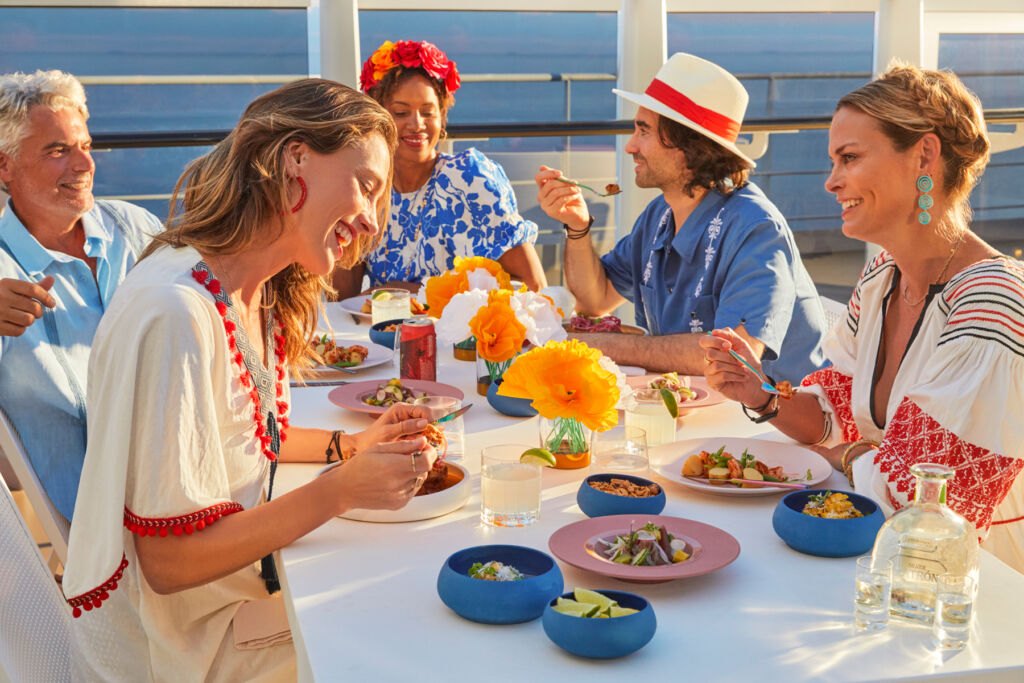 Dining
A big part of cruises is the food, and it’s no wonder cruisers pile on the pounds during a floating hotel. There are plenty of dining options aboard the Valiant Lady, including Korean, Mexican, Italian, Mediterranean as well a pizza place, ice cream stand and sweet shop. With over twenty eateries to choose from, the hardest bit was deciding where to eat.

World-class chefs like Brad Farmerie (of PUBLIC in NYC) and Sohui Kim (of The Good Fork and Insa in NYC) are a few of the names behind the incredible menus. It’s advisable to book the restaurants in advance, which is quite simple via the app. 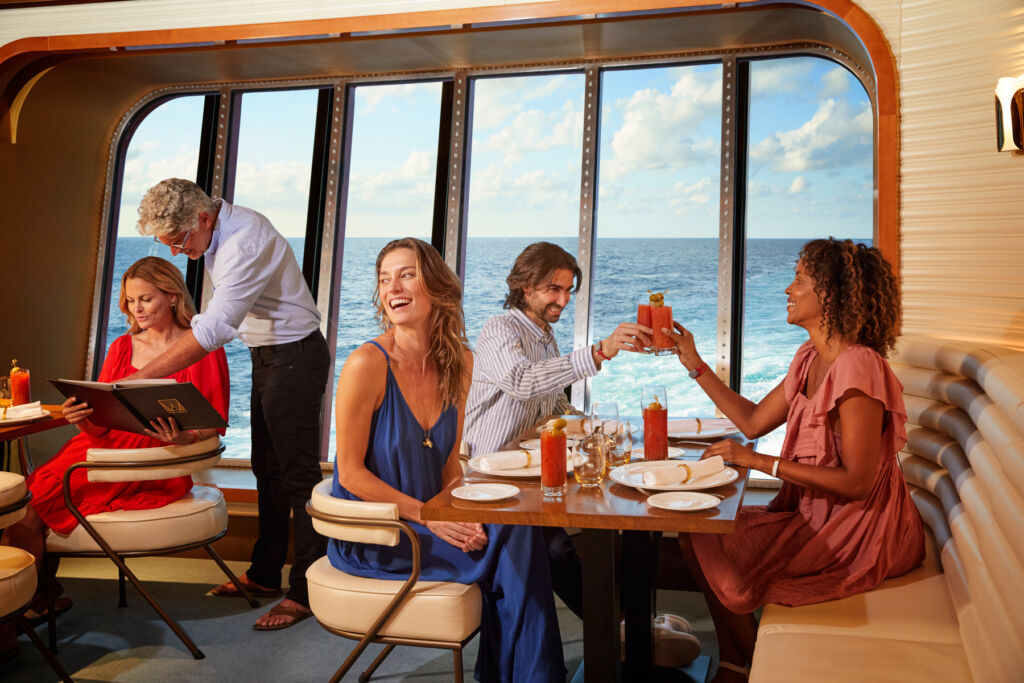 My mother and I had some seriously good food during our three-day trip, with every eatery having its kitchen and chef, and all food is made to order to limit waste. My favourite was the Korean BBQ food at Gunbae, which would rival the rowdiest restaurant or bar you’ve ever been to. As well as serving food and drinks, waiters are very entertaining, encouraging diners to join in games and knock back shots.

Razzle Dazzle was another great restaurant that I loved, especially for breakfast. Although it has a vegetarian menu, they have a ‘secret’ menu that serves up buttered chicken and steak, depending on the area where the ship is sailing. And if you’ve got a sweet tooth, they serve up the best cookies.

If you’re the curious type, head to the Test Kitchen where food-meets science. Inspired by Escoffier’s Ma Cuisine, this laboratory-like eatery is a part cooking school and part eatery. You can sign up for educational, experimental and social cookery or mixology class or have chefs cook up a treat for you in the evening. 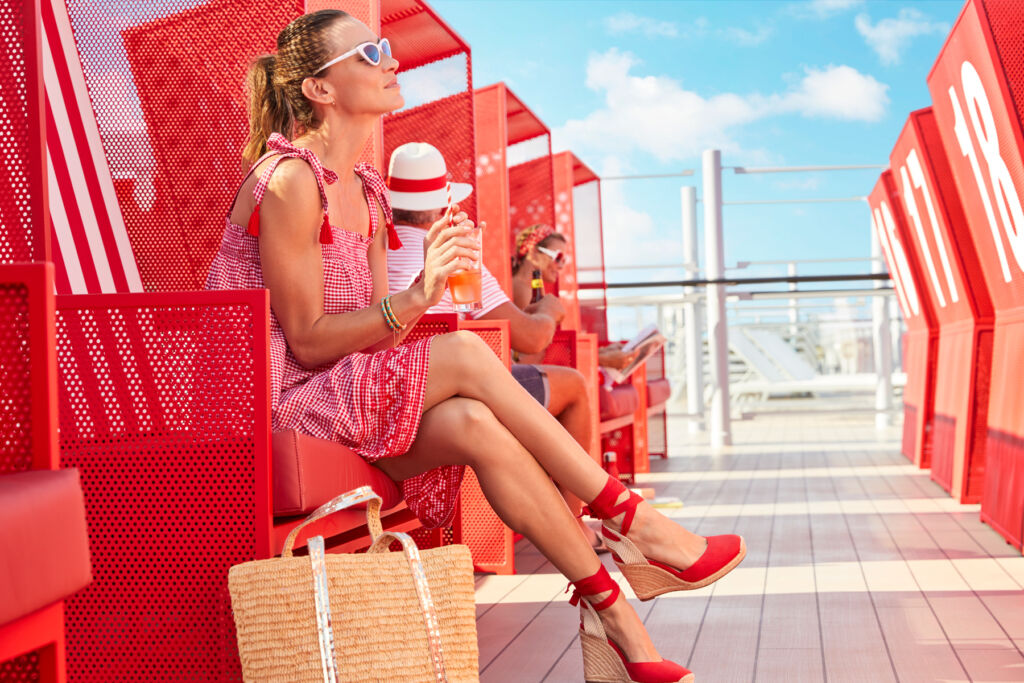 Entertainment
Virgin Voyages is hands down an active ship where cruisers are constantly mingling at bars, shows, and everywhere. It’s a real upbeat atmosphere, and you’ll find yourself chatting with random people and then making plans to meet up with them at a later time and day. And just because there are no kids on board, it doesn’t mean you can’t unleash the inner child in you. With board games like Monopoly, Operation, Connect 4 and even vintage video games in the arcade, you’ll find yourself in a time trap of yesteryear.

Grown-up entertainment takes the form of Never Sleep Alone – a risque after-hours show starring a ‘sex therapist’ where you can share your deepest secret desires. If you, however, prefer a gentler approach to desires of the heart, head to ‘Duel Reality’, an acrobatic dance battle between two families in Romeo and Juliet fashion. Further love can be found in Scarlet Night which tells the fictional story between a sailor and an octopus goddess.

The shows on this vessel are none like I have seen on other cruises. The Red Room is one of the best places to catch a show. This theatre can be arranged in several configurations depending on the show, including allowing for stadium seating on both sides. The audience participation adds that extra bit of fun.

Don’t be surprised to see impromptu performances throughout the vessel. You could be sat having a drink and a chat one minute and the next a full-on performance going on right in front of you. And if that isn’t enough excitement, cruisers can be selected as a VIP by joining in certain activities throughout the ship. On one of the nights, I was one of few selected to see a magic show in a secret area. Magic aside, the whole experience was magical in itself.

The Manor Club is the place to head to after a few drinks, where you can party and dance the night away. The glittery entrance with mirrors galore has to be the most Instagrammable place on the ship. And yes, yours truly did take a picture there. While there is Wi-Fi onboard and plenty of places to charge your phone, don’t expect it to be working perfectly. But that’s not a bad thing. You can fully immerse yourself in the ship’s activities and post about it after your trip. 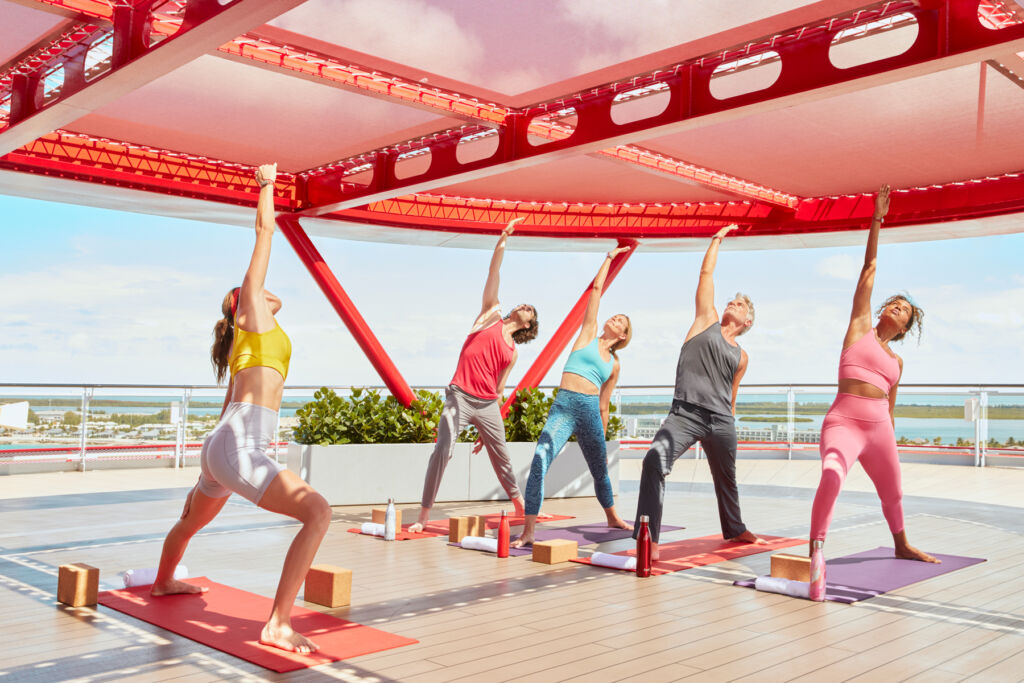 Wellbeing
Heads can be cleared after a night on the tiles with a visit to the fitness centre, where you will find a fully equipped gym, an outdoor boxing area and a running track. There are also several classes such as yoga, spin, and HIIT you can enrol on, but as the studios are small, it’s best to book in advance via the app.

I particularly loved the bungee jumping class, which was similar to TRX suspension training. But if you’re looking for proper good old-fashioned fun that doesn’t feel like exercise, don’t miss the quirky VHS class where the crew clad in fluorescent tops, shorts, and sweatbands lead an aerobic workout to the 80s tunes. You may want to have a rummage through your 80s clothes to bring on board with you and join in. 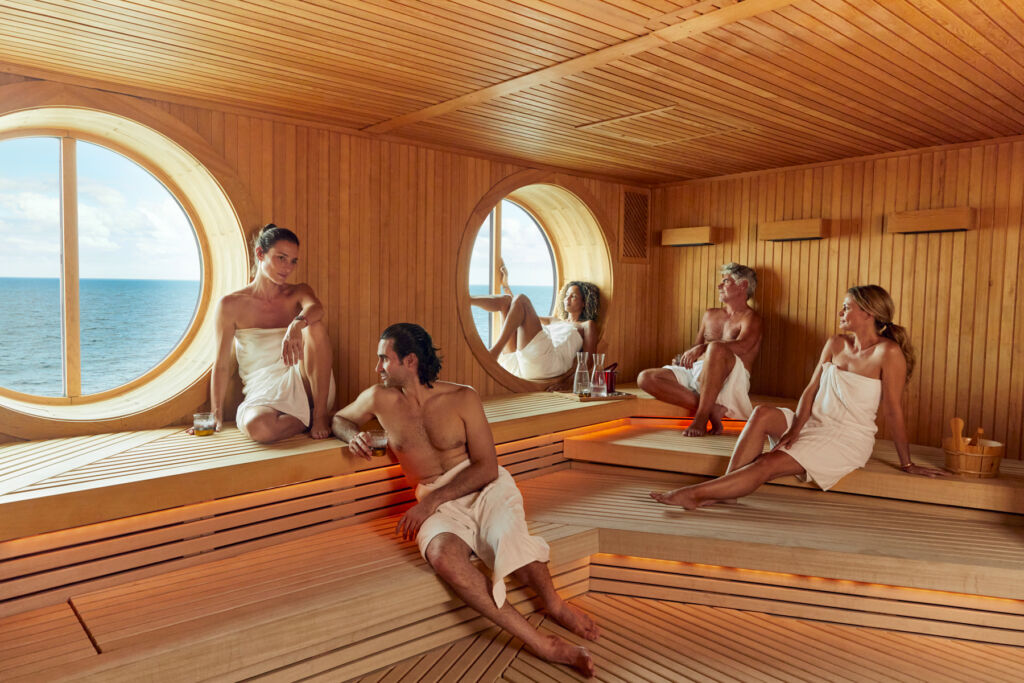 Wellness is taken seriously on the Valiant Lady, and you can give your body and mind a good pampering by escaping to the Redemption Spa. A haven of tranquillity and self-preservation, you can get dirty in the mudroom, allow the sauna to cleanse or simply lie down and have the magical hands of a therapist iron out those knots. I left my mother there for an hour, but she emerged after four. 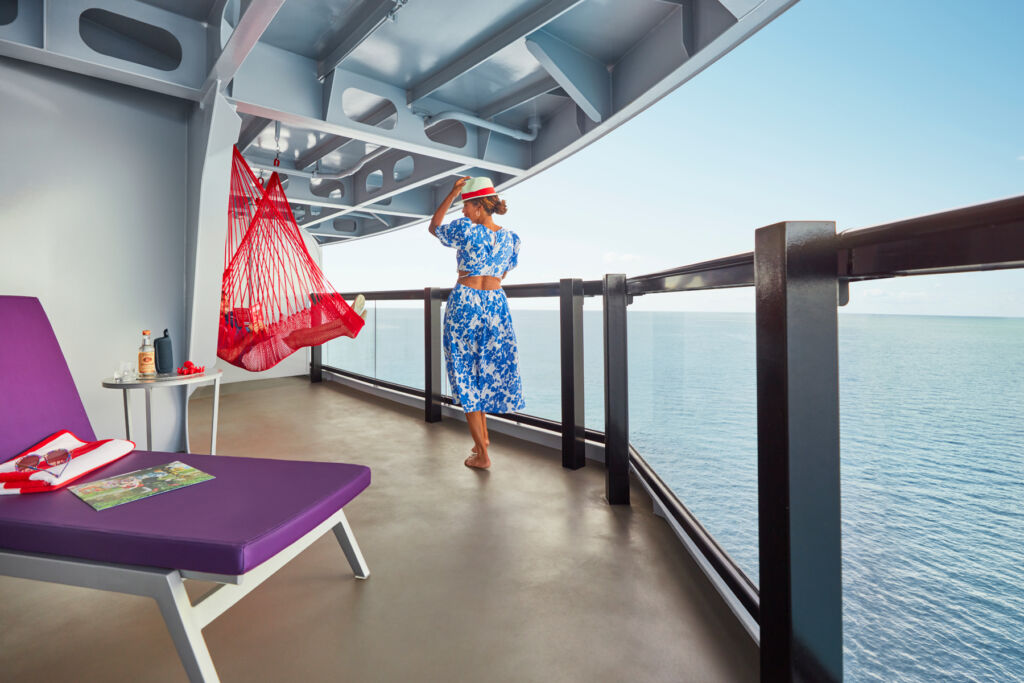 The vessel’s cool, hip vibe ad big personality is aimed to appeal to millennials. And I must say, after spending three days onboard the Valiant Lady, I felt rather cool and young myself. If you’ve never been on a cruise before, then take a leap and try out the glamour and sophistication of a sea voyage and float away with Virgin Voyages.

Valiant Lady – Where and How?

For more information on Valiant Lady, destinations, or to make a booking, visit www.virginvoyages.com.