Van Cleef & Arpels takes part in the Only Watch charity auction in Monaco and donates a unique Poetic Complication™ watch inspired by Jules Verne’s From the Earth to the Moon.

Only Watch is an auction that is held every two years, under the High Patronage of H.S.H. Prince Albert II of Monaco. This is the third year that Van Cleef & Arpels has accepted to take part in the auction organised by the Monegasque Association against Muscular Dystrophies in aid of research into this disease. The 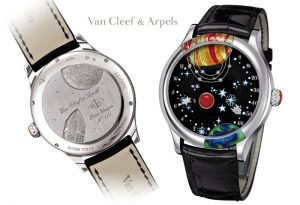 funds collected will be distributed to 15 scientific partners financing 90 researchers and clinicians in five different countries. The auction will be held by Antiquorum at 4 p.m. on 22 September 2011 at the Monaco Yacht Show, the world’s leading luxury yacht fair.

Van Cleef & Arpels has created a unique Poetic Complication™ watch especially for this auction. These rare and exceptional timepieces embody the Maison’s philosophy: each one is designed first to tell a story, to inspire a dream. And then technique steps in to craft the poetry of time.

After their High Jewellery, the theme of Les Voyages Extraordinaires by Jules Verne is the inspiration for Van Cleef & Arpels’ timepieces. With From the Earth to the Moon, which he wrote in 1865, the visionary French novelist anticipated space travel which only became a reality in the 1950s. 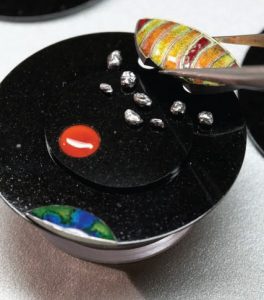 ancient technique in which the surface of a metal object is hollowed out to form compartments which are filled with different coloured enamel). The rocket and moon are hand engraved on to the dial. For this creation, the Maison has used a retrograde movement – a marvel of high precision watchmaking enabling two hands to travel 120° arcs of a circle on the dial and then immediately return to their starting point. On the right-hand side of the dial the space rocket imagined by Jules Verne travels towards the Moon from top to bottom, indicating the minutes from zero to sixty; on the left-hand side a star shows the hours from zero to twelve, from bottom to top.

The stars and planets are repeated on the bezel, with the motifs engraved and adorned with translucid enamel. Th e case is made of white gold and the strap is of black alligator leather.

The From the Earth to the Moon watch is a brilliant demonstration of Van Cleef & Arpels’ extraordinary creativity and expertise. It also provides a message of hope: for years people dreamt of conquering space and walking on the Moon, and they eventually realised their dream …