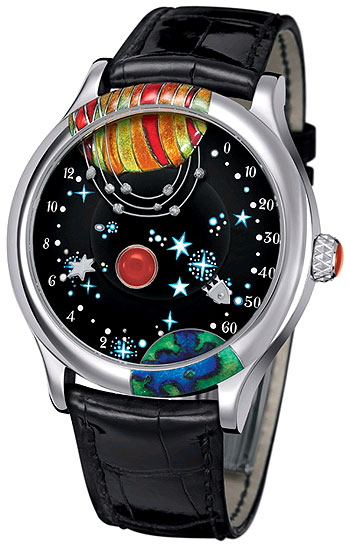 Dial: Champlevé enamel black jade dial depicting an imaginary sky dotted with stars and planets. On the right-hand side of the dial Arabic numerals with the space rocket travelling towards the Moon from top to bottom, indicating the minutes from zero to sixty; on the left-hand side Arabic numerals and a star showing the hours from zero to twelve, from bottom to top. Agate planet represented into the center of the dial. White gold “star” and “rocket” fancy hands.

About Van Cleef & Arpels
Van Cleef & Arpels is a French jewellery, watch, and perfume company that was founded in 1896 by Charles Arpels and Alfred Van Cleef. They opened their first boutique in 1906 at 22 place Vendôme, Paris. Van Cleef & Arpels are renowned for their expertise in precious stones and have won particular acclaim for a groundbreaking gem-setting procedure known as the Mystery Setting. In 2009, the company released a line of luxury perfumes called Collection Extraordinaire, comprising six fragrances. In 2010, launch of a new high jewellery collection during the Biennale des Antiquaires called Les Voyages Extraodinaires de Jules Verne. CVan Cleef & Arpels is owned, through Richmont, by the South African Rupert Family.