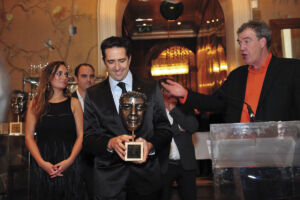 Top Gear announces the Bugatti Veyron 16.4 Super Sport as its Car of the Year
At the annual award ceremony in a London restaurant Jeremy Clarkson and Richard Hammond presented the Top Gear Awards 2010.  The third of the presenting team, James May, who actually picked the Bugatti Veyron 16.4. Super Sport as his “Car of the Year”, was tied up in a filming session in the United States. The statue was  received by Pierre Henri Raphanel, Bugatti’s Pilote Officiel and the driver of the Super Sport’s land–speed record of 431 km/h in June 2010.

James May drives the Bugatti Veyron 16.4 Super Sport
On the same day as Bugatti made its own successful challenge to claim the world production car land-speed record a tense James May fastened himself into the ultimate version of the Bugatti Veyron, the Super Sport, in order to make a personal attempt at breaking his own land-speed record, at the proving grounds of Volkswagen Group’s Ehra-Lessien track. Admitting to being nervous at the thought of surpassing all speed limits he’d experienced so far, James May soon passed his own record reaching a staggering 417km/h (259.11 mph) whilst commenting on the stability and performance of the car.
Aired in series 15 of the popular TV show Top Gear, James’ drive is still available on the website and was featured in Top Gear Magazine, revealing that ‘Captain Slow’ was, once again, “not so slow”.
Every modification is designed to produce an even more powerful car for an agile ride. The result is a car with a uniquely high performance of 1,200-hp (882 kW) offering experienced drivers a whole new dimension of excitement, with a maximum torque of 1,500 Newton metres and a limited top speed of 415 km/h (limited only to protect the tyres) but, the technical specification of the Super Sport is identical to the record car.

His unique experience of the Bugatti Veyron 16.4 Super Sport’s performance led James Mayto proclaim it his personal Car of the Year 2010.

Bugatti Veyron 16. 4 Super Sport almost sold out
The Super Sport is a result of the further development of the classic exclusive 1,001-hp Bugatti Veyron 16.4, launched in 2005. This model offers a stunning set of specifications, such as the twin clutch gearbox with seven speeds, the extraordinarily precise driving performance in bends and excellent stability when braking and accelerating. Continuous work in extreme performance ranges lead constantly to new conclusions, which enabled the engineers at Bugatti to develop the Veyron into a direction in which the driver can reach new dimensions.

With 38 Super Sports already ordered, the Super Sport is almost sold out.