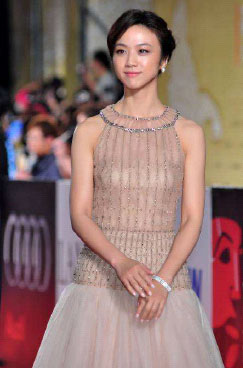 The 48th Golden Horse Film Festival was held on the 26th of November, 2011, at the Hsinchu Cultural Affairs Bureau, Taiwan. This year’s Golden Film Festival was claimed as the most flamboyant and striking year for the Taiwanese film industry, films nominated including young talent directors’ works in diverse themes, and prominent films in the Greater China area. World famous actresses Vivian Hsu and Tang Wei, film producer Angie Tsai of film “You Are the Apple of My Eye”, Chinese eminent actresses Qin Hailu and Jiang Wenli, and multi awarded actress Kara Hui, all gathered in Taiwan for this special festive occasion. The actresses may be different in acting and style, but they all chose to walk the red carpet with Piaget to fill the audiences, media and fans with the most enchanted scene that glittered in supreme brilliance!

Vivian Hsu, on behalf of film “Warriors of the Rainbow: Seediq Bale”, paired her dark blue long gown with the Piaget Limelight Garden Party Diamond Gardenia necklace and ear rings in fern motif. The soft yet firm and persistent nature of fern echoed to the warrior spirit of the film while the Limelight fully paved diamond watch on her wrist responded to the palette of her dress. 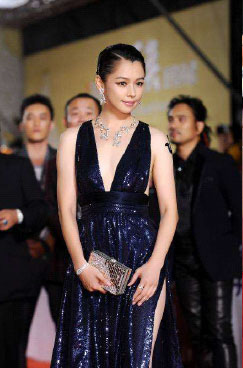 Tang Wei, the first foreign actress been nominated in the Korean Blue Dragon Film Awards, flew to Taiwan right after her presence at the Korean awarding ceremony and presented at the Golden Horse film festival awarding ceremony as the award presenter. She beamed her star demeanor throughout the ceremony with a pair of Piaget Possession ear rings.

Nominated with the film “The Piano in the Factory”, Qin Hailu, paired her reddish long gown with the Piaget Limelight Primavera necklace, Miss Protocole diamond ear rings and a Limelight jewelry watch, and the iconic Possession Entrelacée ring brought her individuality out of the elegance.

Jiang Wenli, nominee for Best Supporting Actress with “Love for Life,” favored the Limelight jewelry necklace and watch, and the Piaget Rose ear rings and necklace Magic Garden of Piaget, her feminine was surely breath taking. Kara Hui, nominated in the same category with “A Chinese Ghost Story”, chose jewelry in pure geometric forms from the Limelight collection, yet the Possession watch with pearl watch band let out the unique sophistication she possessed within her elegance. In chorus to the Piaget phenomenon, producer Angie Tsai walked the red carpet with the Magic Gardens of Piaget Rose ring.