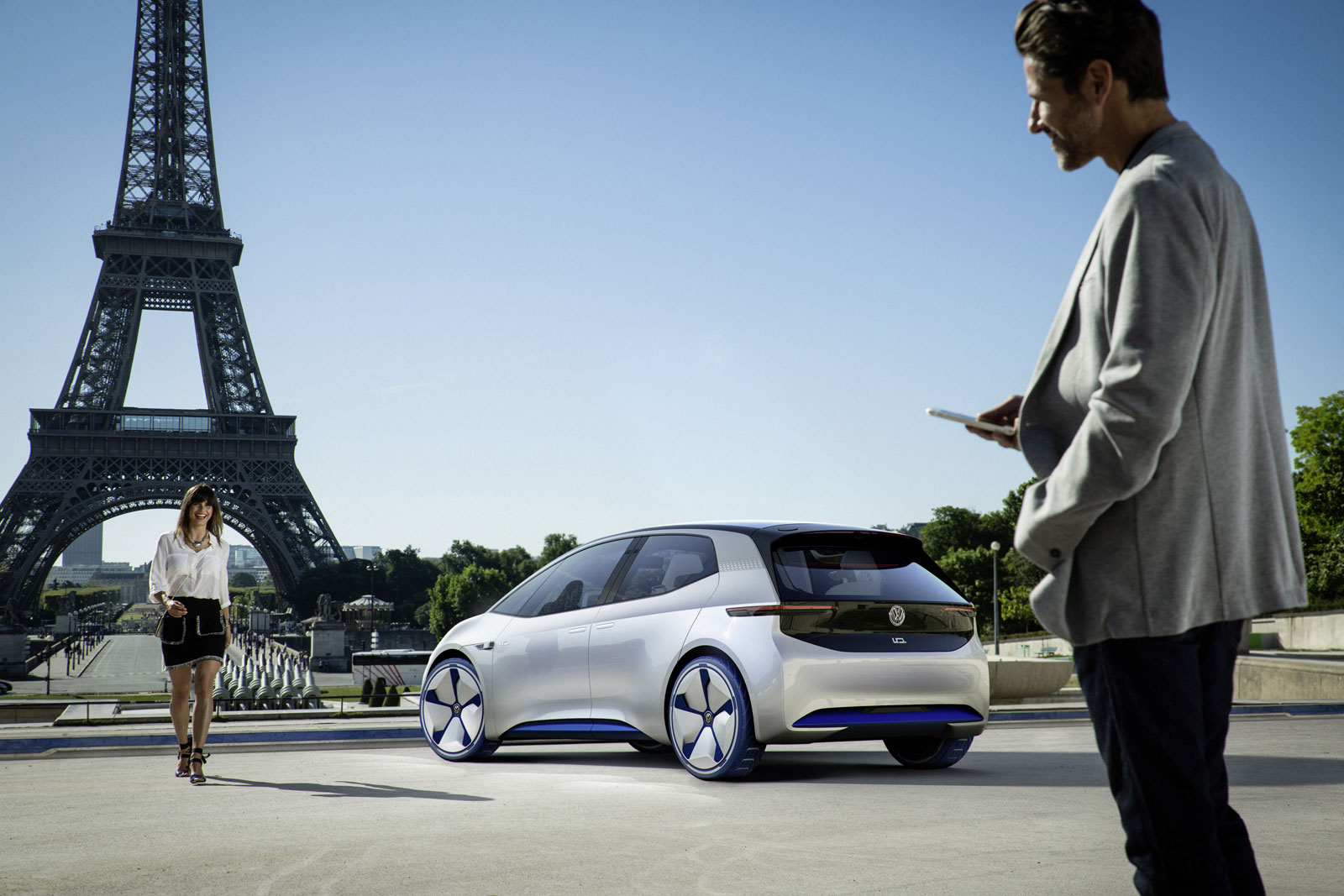 The Volkswagen Showcar I.D. is the first Volkswagen in a completely new fleet of highly innovative electric vehicles, based on the Modular Electric Drive kit (MEB)

Volkswagen is embarking on its journey to the future at the Paris Motor Show with the world premiere of the visionary I.D., a highly automated electric car that will be able to cover a distance of 249 to 373 miles on a single battery charge. The production version of the I.D. is due to be launched in 2020 at a price on a par with comparably powerful and well-equipped Golf models. Volkswagen is looking even further ahead with this concept car: in “I.D. Pilot” mode, it is capable of fully automated driving, a technology that should be ready for series production in 2025. Volkswagen has also set itself the goal of selling a million electric cars a year by 2025 and the production version of the I.D. will make a decisive contribution towards this ramp-up of e-mobility. 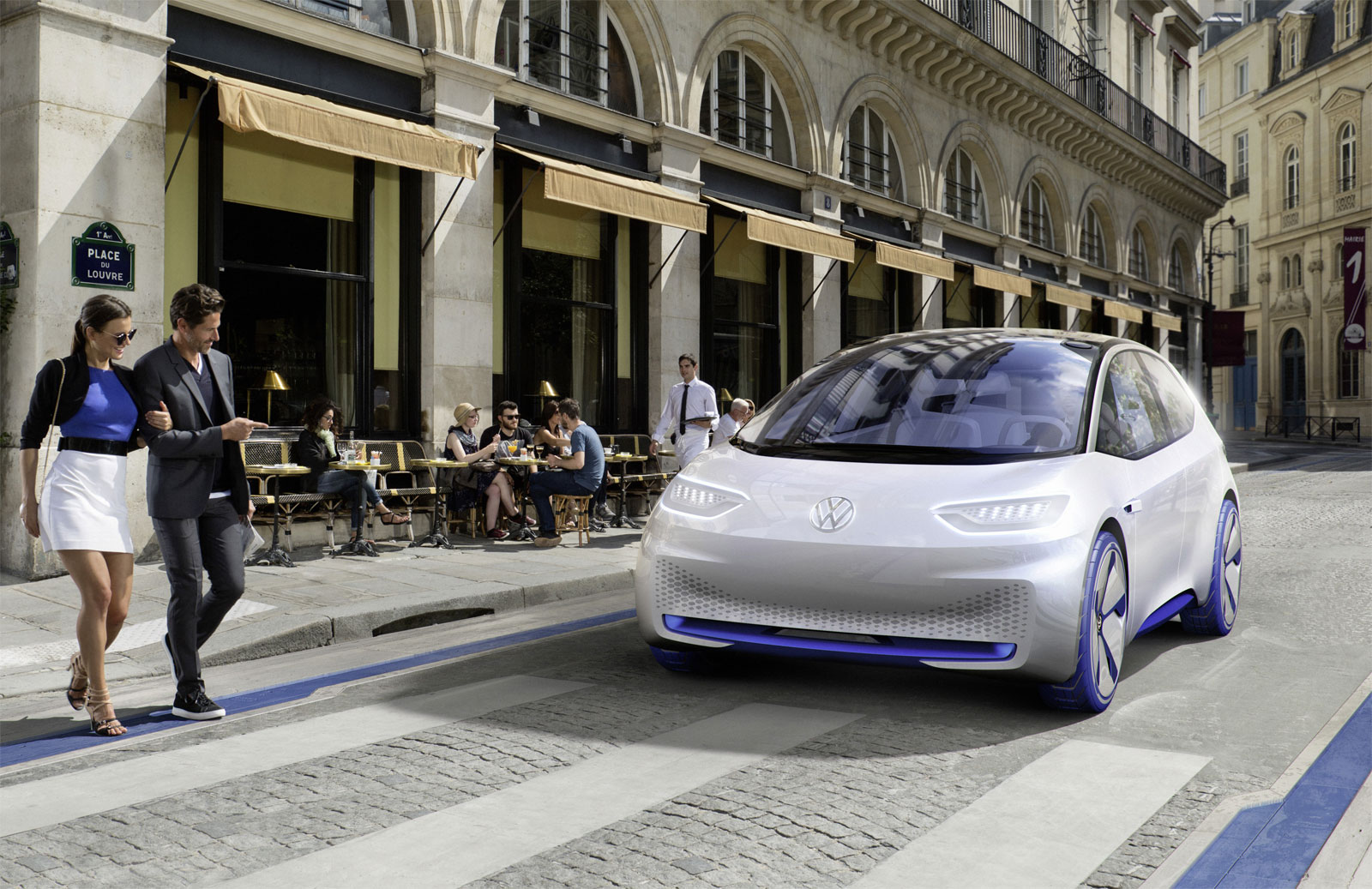 Volkswagen has made electric mobility and fully automated driving conspicuous with its innovative exterior design language and with the interior, too: the conventional driving environment has been transformed into the interactive centre of a mobile lounge, or a supremely versatile Open Space. The spaciousness of this area and the intuitive, clear functionality allow you to experience mobility in a completely new way. 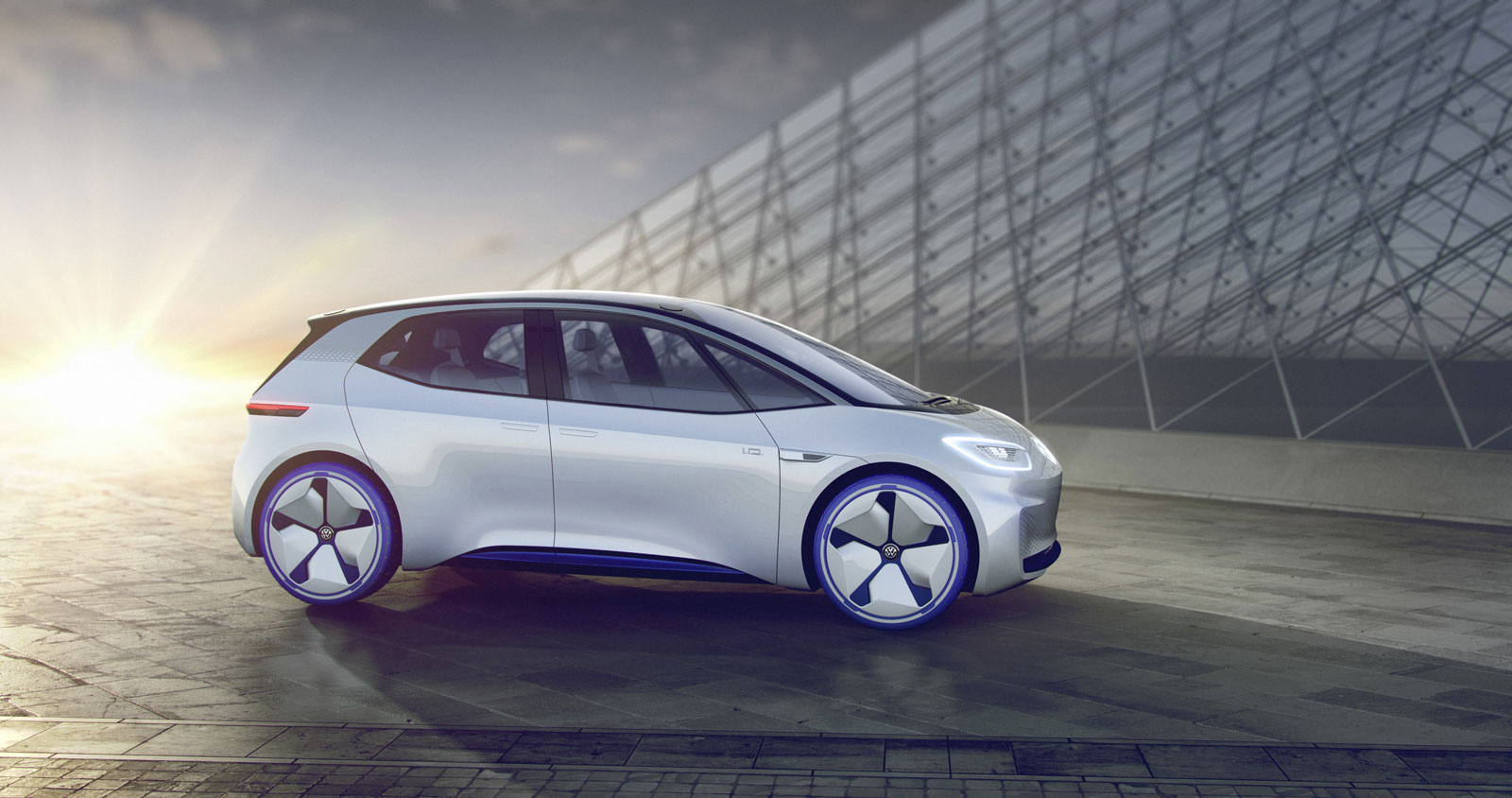 The I.D. represents the world “the day after tomorrow”. But the latest generation of the e-Golf, with a zero-emissions range of up to 186 miles (on the European cycle) and new gesture control, will be on the road “tomorrow”. The world of “today” is also visible in state-of-the-art Volkswagens like the new Tiguan, which launched interior digitalization with its Active Info Display and head-up display. The Tiguan, the e-Golf and the I.D. concept car together point the way from the present to the future on the Volkswagen booth. 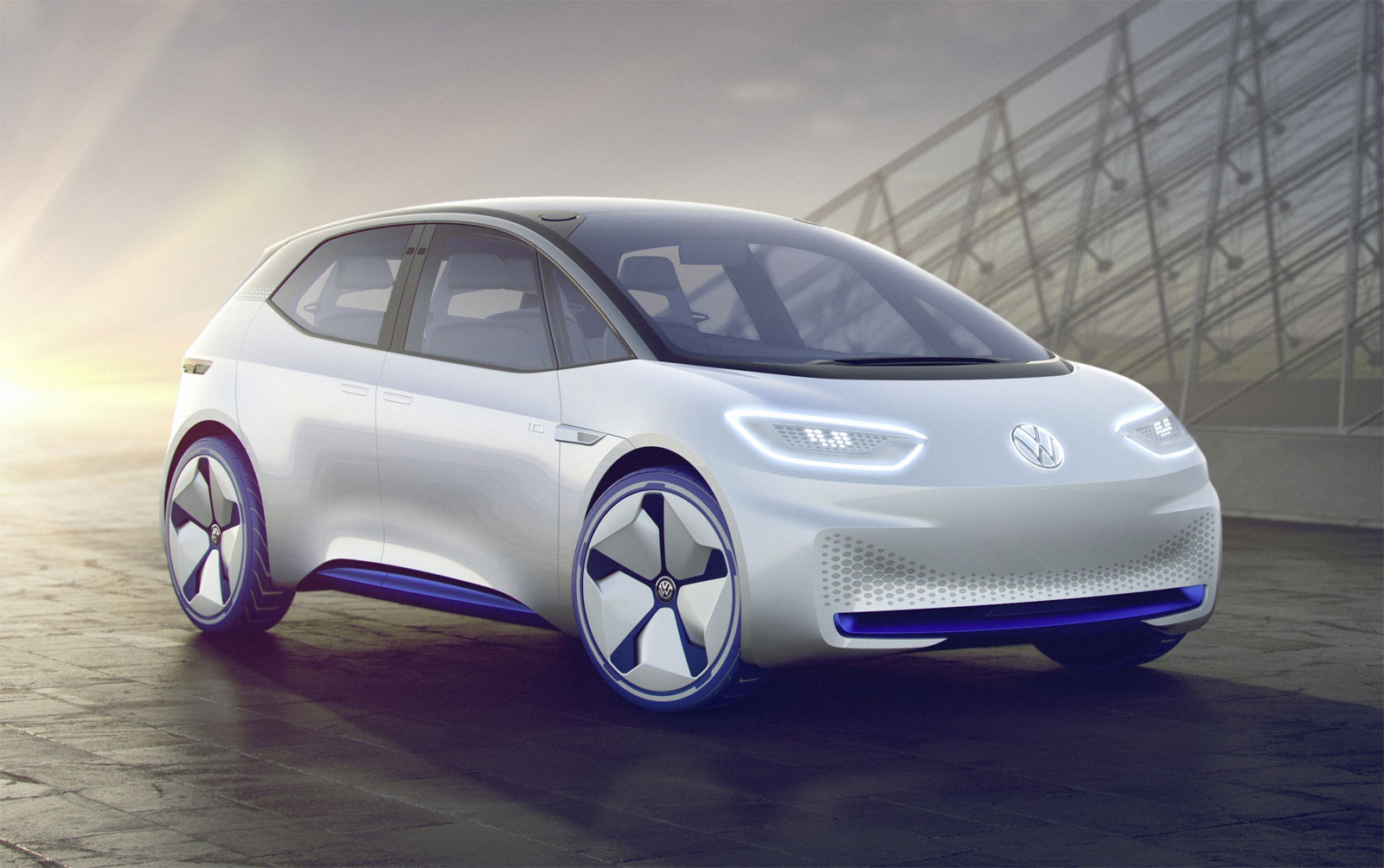 The I.D. is the first vehicle to showcase Volkswagen’s iconic new design language for compact electric vehicles. The exterior and interior design preview the year 2020 because while the vehicle is currently a concept, the I.D. is expected to be on our roads within the next four years, and its fully automated driving capability gives us a glimpse of the year 2025. Thus, the I.D. is a standard bearer for the progressive Volkswagen brand strategy called “Think New”. This strategy is based on four central areas of innovation, which are also reflected in the new Volkswagen design approach for electric vehicles:

For Volkswagen, the world premiere of the iconic I.D. in Paris marks a watershed. This car is as revolutionary as the Beetle was seven decades ago and the first Golf was 40 years ago, vehicles that went on to become two of the world’s most successful cars of all time. The I.D. has the potential to make history, too. It has been designed to be a compact all-rounder that will help to make electric cars the ‘everyday’ choice, with its impressive electric range and an attractive price. 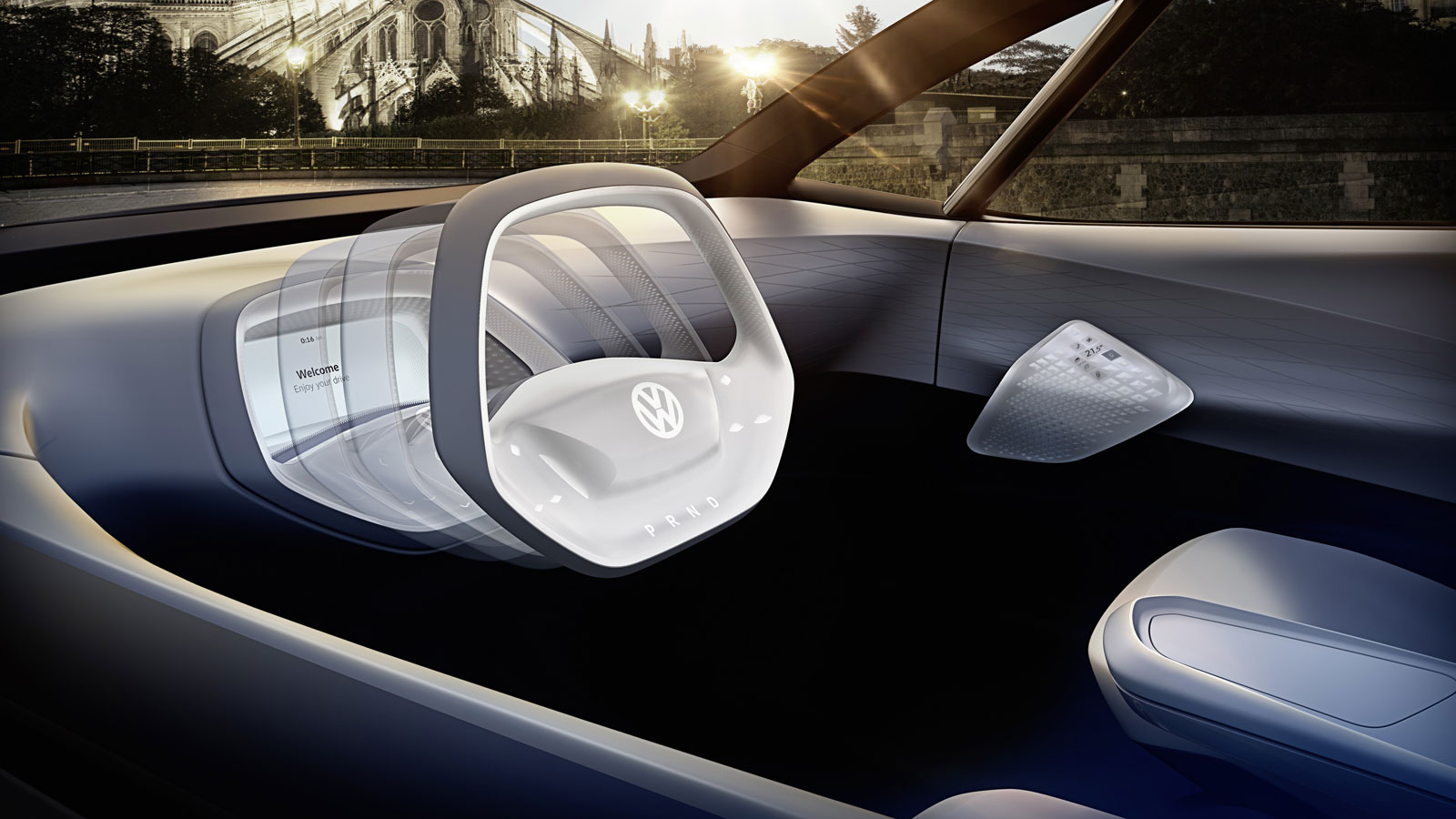 The driver can activate the fully automated “I.D. Pilot” mode just by touching the Volkswagen logo on the steering wheel. With this, the electrically adjustable and retractable steering wheel disappears into the dash pad to form a single entity flush with the dashboard, boosting the lounge feel inside the car. The Open Space concept is an all-new interior layout because the architecture of the rear-mounted electric motor and the high-voltage battery in the floor of the vehicle liberates more space and allows greater flexibility and more freedom than was ever possible in a car that’s just over 13 feet long. The I.D. is positioned as a compact electric car with which Volkswagen aims to expand its range of high-volume models in parallel to existing global bestsellers such as the Polo, Golf, Tiguan and Passat. 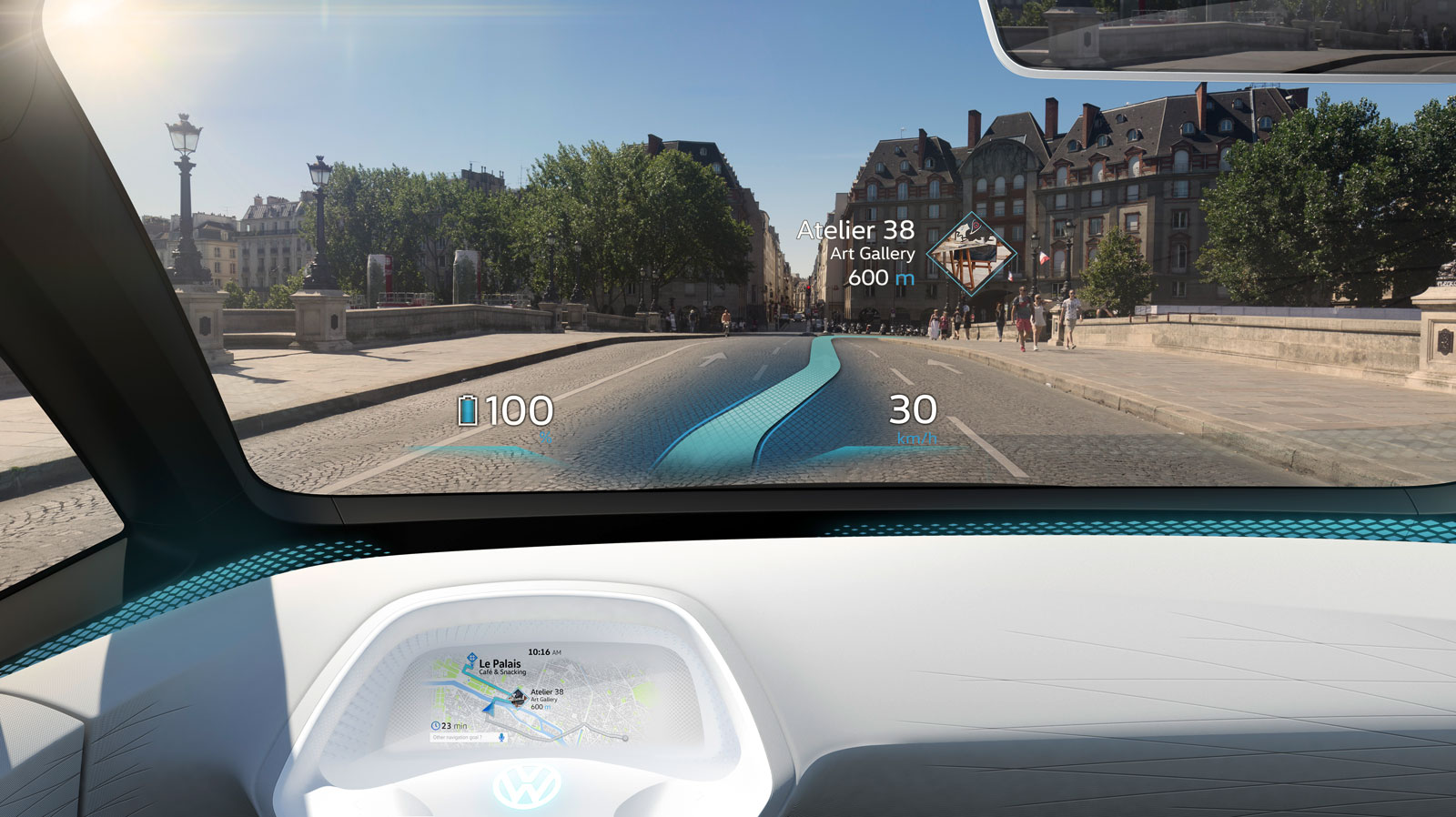 Connected Community – the new Volkswagen ID
Anyone who drives a Volkswagen in the future will be given their own Volkswagen ID. The ID is an individual profile, in which the personal seat and air conditioning settings, your favorite radio stations and songs, the sound system settings, the configuration of the navigation system, and the type of ambient lighting, as well as the contact details of the driver’s friends and business associates, are saved. This profile can be securely accessed via the cloud, enabling the I.D. to recognise the legitimate user by their smartphone—the Digital Key—and know who is about to get behind the wheel.

With the I.D. you’ll be at home on the road because, with Volkswagen Home-Net, it will be possible to interconnect your car and home. For example: using cameras in your house you will be able to check whether everything is OK at home from the car. If a family member has forgotten their key, all you need do is call and look into the camera, and I.D. sends the picture to the Active Info Display, so that the driver can open the front door using an app. 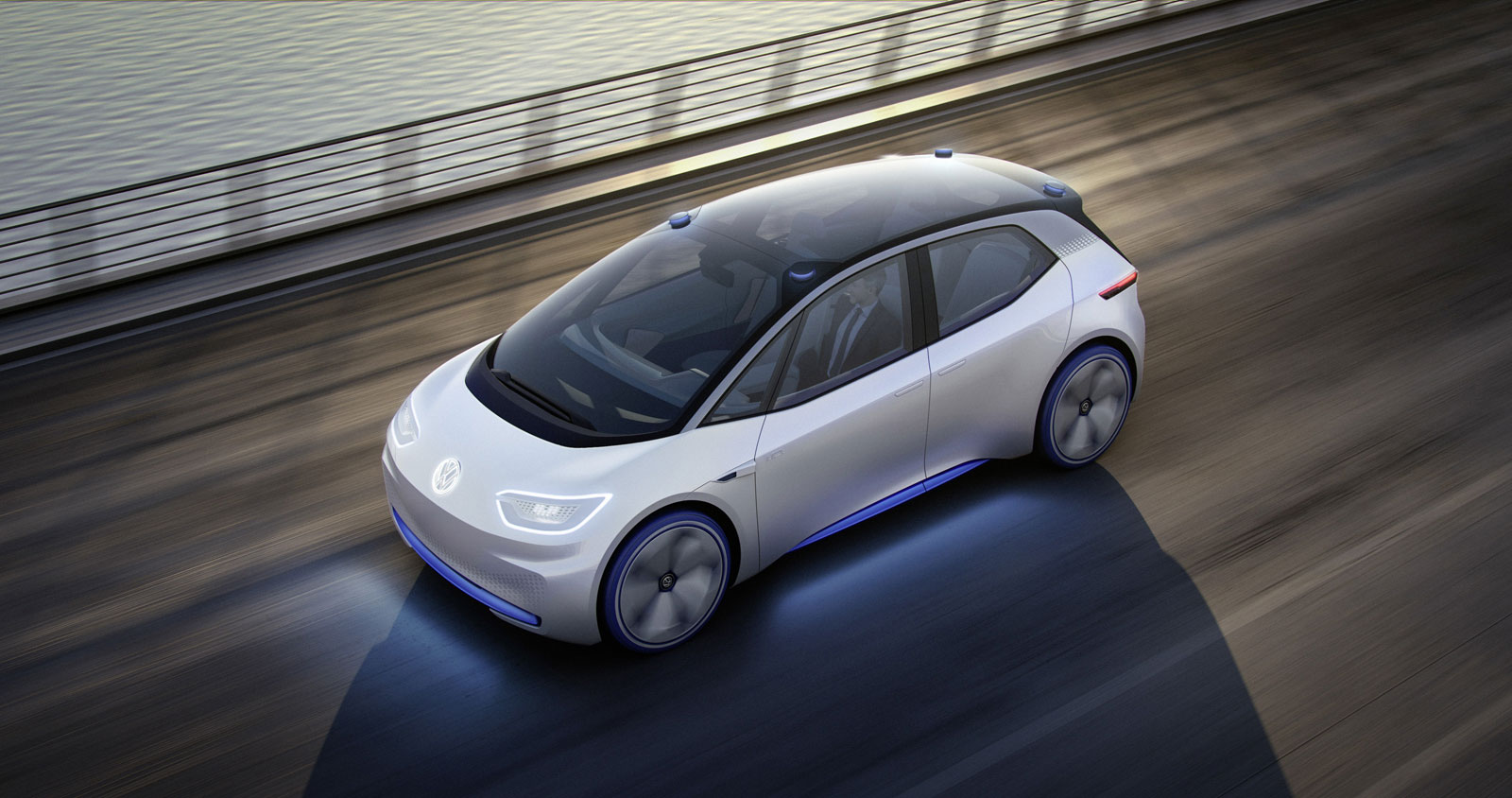 It could even become perfectly normal to receive parcels on the road, since the new Delivery Service in the trunk of your car can act as a mailbox. Studies show that millions of parcels sent in Europe could alternatively be delivered to the trunk of a Volkswagen parked anywhere between Helsinki and Lisbon. If the car owners aren’t at home, I.D. would be able to receive parcels simply and efficiently, or allow them to be collected. The parcel delivery agent is able to locate the car by GPS and is granted temporary permission to open the trunk via an app. The car’s owner is then notified via an app or e-mail as soon as the parcel has been delivered and the trunk is locked again. Volkswagen is currently working with international logistics service providers to implement this innovative concept.