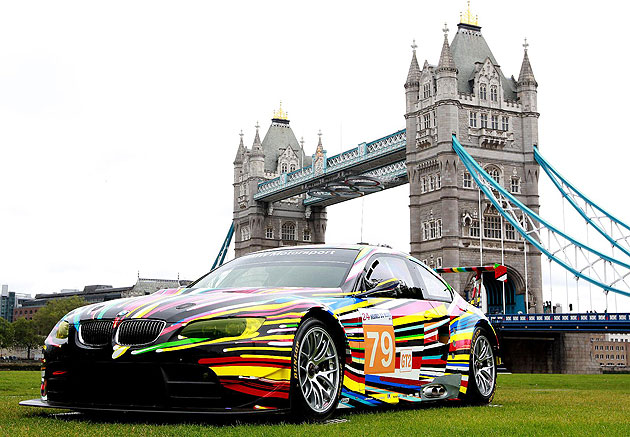 ART DRIVE! The BMW Art Car Collection 1975-2010 exhibition opens in the NCP car park on Great Eastern Street in Shoreditch, London on 21 July and runs for two weeks. In partnership with the ICA, the Mayor of London and the London 2012 Festival, the free admission exhibition brings together for the first time in the UK the collection of BMW cars transformed by 16 of the world’s leading international artists.

The exhibition is part of the London 2012 Festival, a spectacular 12-week nationwide celebration running until 9 September 2012, bringing together leading artists from across the world with the very best from the UK.

The BMW Art Car Collection started when French racing driver and auctioneer Hervé Poulain invited his friend Alexander Calder to design a car that married artistic excellence to ‘an already perfect object’.  The end result was a racing car that would ultimately compete in the Le Mans 24-hour race in 1975. And so the BMW Art Car was born.

Since then some of the greatest names in contemporary art have added to the collection creating a wide range of artistic interpretations. David Hockney’s 1995 Art Car paints the inside of the car on the outside, revealing everything from internal engine parts to a dog in the back. Rauschenberg incorporates photographic transfers of Ingres paintings while Andy Warhol and Roy Lichtenstein used the canvas of the car to portray the essence of speed.

Well-known for its support for innovation and new talent across the contemporary arts, the ICA has sought out some exciting emerging names in design from the East End to help deliver this project, including Julia, Loop.pH and My Beautiful City.

Gregor Muir, Executive Director of the ICA, said: “We are delighted to be working with BMW, the Mayor of London’s Office and London 2012 Festival on this prestigious project. Art Drive! presents an exciting opportunity for the ICA to reach out to new audiences.”

Ruth Mackenzie, Director of London 2012 Festival, added: “The London 2012 Festival is thrilled to be working with BMW and the ICA on what will be one of our most exciting pop up events of the summer – London has never seen these astonishing cars, and this free event will be a highlight of our festival.”