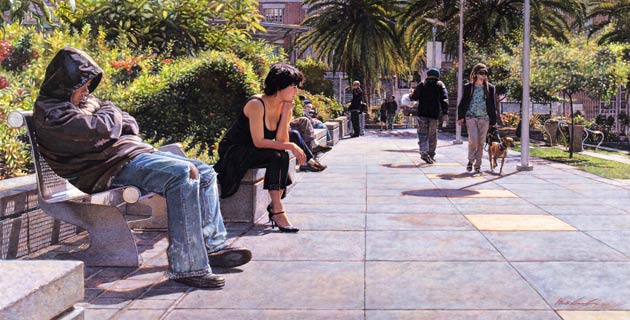 One of U.S. Art Magazine’s top ten American artists since 1993, Hanks was named to the U.S. Art Hall of Fame, distinguished as one of the Top 25 Selling Artists by Décor Magazine, and has exhibited throughout the U.S., Canada and Hong Kong—and now, The Wynn Las Vegas December 20-22

Growing up in many places as the son of a Naval officer, Steve Hanks realized he was always the best artist in his class but was still blown away when—many years after establishing himself as one of the world’s foremost watercolour masters—he found his first grade report card in a file at his parent’s house.

“The teacher had written, simply, Steve is an artist’,” says the New Mexico-based painter, who will be exhibiting at the groundbreaking World of Art Showcase, a celebration of the visual arts.

“I sometimes wonder if by writing that, she somehow knew all of this would happen. Growing up, my parents wanted me to be a tennis player and I played football and baseball and surfed when I we lived in Southern California. But art was the greatest comfort for me.”

Launching his career by drawing bestselling posters of The Beatles, The Doors and Bob Dylan, Hanks—who attended the Academy of Fine Arts in San Francisco and earned his Bachelor of Fine Arts from the California College of Arts and Crafts— has become a world class artist recognized by jurors, galleries and collectors throughout the world.

He has received the National Watercolour Society Merit Award and the National Academy of Western Art Gold Medal, in addition to consistently appearing in the list of top ten American artists compiled by U.S. Art Magazine. Art for the Parks has honoured his work with many awards since 1989. When the Pacific Rim show in Seattle opened their show to a wider variety of art in 1999, they selected Hanks as Artist of the Year. He was also one of five winners selected to the U.S. Art Hall of Fame 2000, and was named as one of the top 25 selling artists in the June, 2002 issue of Decor magazine. In 2002, the 7th Annual Andre Agassi Grand Slam for Children chose Hanks as their feature artist. Four years later, he was the featured artist in Watercolour Magazine.

In addition, his fine art prints have been published and distributed throughout the world by Hadley House, Bentley Publishing and The Greenwich Workshop.

While his primary showcase gallery is the E.S. Lawrence Gallery in Aspen, Colorado, Hanks has also done one man shows at the Lesley Levy Gallery in Scottsdale and appeared in many invitational shows throughout the U.S., Canada and even Hong Kong. Closer to home, in 2005, the Weems International Artfest featured Hanks as one of the showcase guest artists and he was awarded for “Outstanding Contributions to The Culture of New Mexico.” In 2008, he was featured artist in Art of The West and American Artist Watercolour.

“We are thrilled to have Steve as part of our inaugural World of Art Showcase. He is one of the world’s finest watercolourists, combining outstanding technique with his trademark style of ’emotional realism’, says the event’s Executive Director Mario Parga. “As well as his popular prints, Steve will be bringing multiple original watercolour paintings to the show. These must be seen by all for their incredible beauty, and will be for sale to collectors; a rare opportunity to purchase an original from the master himself.”

“We are thrilled to have Steve as part of our inaugural World of Art Showcase, not only for his outstanding achievements in his trademark realm of ’emotional realism,’ but because he brings with him a fascinating story,” says the event’s Executive Director Mario Parga. “He started his career working in oils, but ultimately his allergic reaction to oils led him to experiment and later triumph using watercolours. He was able to develop a powerful style with watercolours that resemble the complete look of an oil painting while still painting with a traditional transparent watercolour technique. We’re excited to have him exhibit some of his best work in this area.” 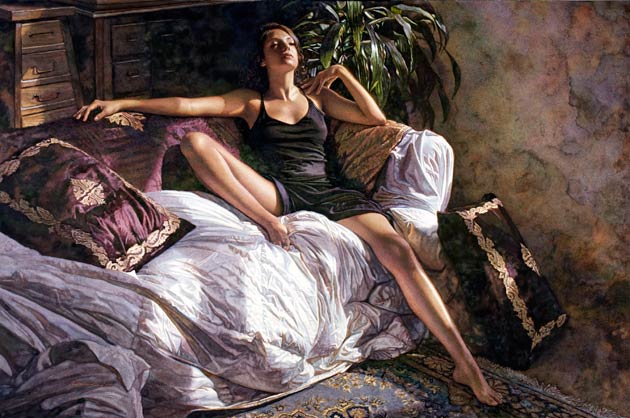 While Hanks initially felt that being forced to switch from oils to watercolours might make him lose the “oily” feel that makes skin look so realistic, he found that using watercolours helped loosen him up as a painter—and now through various layering techniques, he can capture the texture of skin even better. One of the powerful new tools he uses that allows watercolour paintings to resonate the way oil-based ones do is Aquabord, a clay coated hardboard panel that gives watercolourists unprecedented freedom and control; it’s a multimedia panel that simulates the absorbency and texture of cold pressed but allows colour to be lifted back to white easily while also leaving the richest, most vibrant colour possible.

Hanks creates his supremely realistic, often quite sensual “emotional realism” by often leaving the faces of his figures obscured or turned away, not only leaving the details of the face to the imagination of the viewer but also to allow the entire figure to express the emotion. Another signature element of his style is backlighting, in which he uses a photograph he takes of a model to keep shadows consistent.

“Sunlight is one of my favourite subjects,” he says. “I’m fascinated by how it filters through things, how it floods the whole room with colour. Often my paintings are really more about sunlight than anything else. Then again, women occupy a special niche in my sensitivity. They express more storytelling ability, and the fine subtleties it takes to capture their essence intrigues and challenges me. There’s more magic in them. Among my favourite of these is my ‘There Are Angels Among Us’ series.”

Those seductive portraits and many others will be on display at Steve Hanks’ exhibition at the World of Art Showcase. “Most of my work has been at a single gallery (E.S. Lawrence) for a long time,” he says, “and I’m excited to be at an event with so many other great artists with the opportunity to expand these exhibition opportunities. It’s exciting to be able to expose my work to new people who have not yet seen it, who may also become new clients. Most of the shows I do in Aspen, I’m there for the opening and then I’m gone, and there’s not much interaction between me and serious collectors. I’m looking forward to having a great event with an intelligent, receptive crowd.”