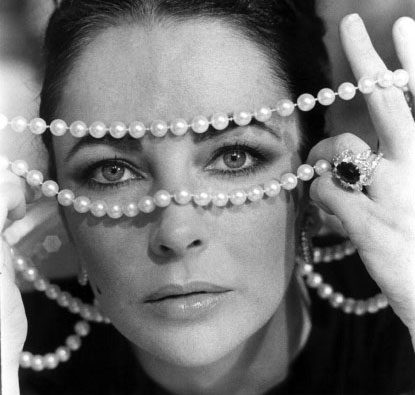 To coincide with the sale of Elizabeth Taylor’s estate at Christie’s, Van Cleef & Arpels takes a look back at the legendary star’s incredible collection of its jewelry.

Without question, Elizabeth Taylor had the greatest collection of jewelry ever assembled by a Hollywood movie star. It is among one of the most extravagant collections of jewelry in the world. Van Cleef & Arpels was pleased to play such a significant role in Elizabeth Taylor’s collecting over her lifetime.

There are more than 40 Van Cleef & Arpels designs in Ms. Taylor’s collection to be sold at Christie’s in New York from December 13 -16, 2011. The collection includes pieces Elizabeth Taylor received from Michael Jackson and Ron Perelman as well as designs she purchased herself. During their epic romance, Richard Burton provided Elizabeth Taylor with the majority of her Van Cleef & Arpels jewels. 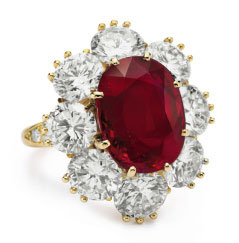 “One day I’m going to find you the most perfect ruby in the world” was the romantic promise Richard Burton once made to Elizabeth Taylor. After four years searching for the stone, he found the Puertas Ruby – a gem with a royal provenance – at Van Cleef & Arpels. During the process of acquisition, Mr. Burton secretly wrote Pierre Arpels letters in French from The Palace Hotel near the couple’s Chalet Ariel in Gstaad, Switzerland. Then, finally, for Christmas in 1968, Richard Burton gave Elizabeth Taylor the 8.25-carat Puertas ruby, diamond and yellow gold ring.

In Elizabeth Taylor: My Love Affair with Jewelry, the actress recalled the moment when she opened the ring box. “I screamed, which probably echoed over the mountains, and I couldn’t stop screaming,” she wrote. “I knew I was staring at the most exquisite ruby anyone had ever seen.”

In 1967, Richard Burton presented Elizabeth Taylor with this gorgeous brooch featuring circular, marquise and baguette-cut diamonds set in a platinum floral motif. The convertible design could be worn as a ring and a brooch. The actress often modeled the Van Cleef & Arpels diamond pendant-brooch instead of the Taylor-Burton diamond on her pear-shape diamond necklace to avoid the security detail her insurance company required every time she wore the 69.42-carat gem. With a $1,500,000 price tag, it was one of the most expensive stones in the world when Mr. Burton bought it in 1969. At the 1974 premiere of That’s Entertainment, the actress was photographed in the Van Cleef & Arpels pendant-brooch on her diamond necklace. Elizabeth Taylor continued to wear the pendant-brooch on the diamond necklace for many years after she sold the Taylor-Burton diamond in 1978 to benefit a hospital in Botswana.

Richard Burton made headline news in 1969 when he purchased the Taylor-Burton diamond, but it was not the only jewelry gift he gave Elizabeth Taylor that year. Mr. Burton also bought her an 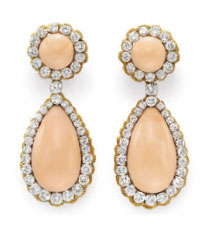 Throughout her life, Elizabeth Taylor had witty repartee with the press. In 1995, she told an InStyle editor, “I love purple but I do tend to collect the more precious stones.” Certainly she gave the journalist a good line for the story, but not quite the truth. Elizabeth Taylor clearly admired amethyst and coral jewels. She received seven pieces with this eye-catching gem combination from Richard Burton in 1971. Elizabeth Taylor attended several high-profile events in the jewels over time. In 1981, she held a press conference at the Kennedy Center in Washington, D.C. wearing the Dodecanese earclips with Ibiza Maltese Cross pendant pinned to her jacket as a brooch.
At the 1984 opening of the Rink nightclub in New York, Elizabeth Taylor paired her amethyst and coral Panka ear pendants with her Tassel Sautoir and posed for pictures with Andy Warhol and the modern dance choreographer Martha Graham. The paparazzi captured the glamorous vision of Ms. Taylor leaving the Carlyle Hotel in 1980 wearing her Panka ear pendants with the Lamartine bracelet.
In 2011, this set was among her pieces on view at the Set in Style, Van Cleef & Arpels exhibition at the Cooper-Hewitt Museum in New York City.

In 1971, Elizabeth Taylor was just thirty-nine years old when her oldest son Michael Wilding announced he was about to become a parent. “After I cried with joy at the news, Richard took me by the hand to buy a ‘granny present,’” Ms. Taylor recalled in My Love Affair with Jewelry. The couple went from their yacht Kalizma up the hill to Van Cleef & Arpels in Monte Carlo where Mr. Burton bought the Barquerolles ear pendants and a 12¾-inch choker centering on a lion with emerald eyes, a magnificent mane and a large round pendant in its mouth. The circular pendant could be detached and worn as a brooch. And the choker can be taken apart and worn as two separate bracelets. Ms. Taylor wrote in her book about the moment she saw the jewels and Mr. Burton’s response when she tried the pieces on: “I always know when something is right because my heart goes ‘click’ and my heart was clicking like a castanet when I saw this set. Richard loved it on me and he said, ‘Wow! You are so beautiful, nobody is going to believe you’re a grandmother.’”
Ms. Taylor modeled all of the jewels for one portrait session with Norman Parkinson. For another session with the acclaimed British photographer, she just wore the earrings. 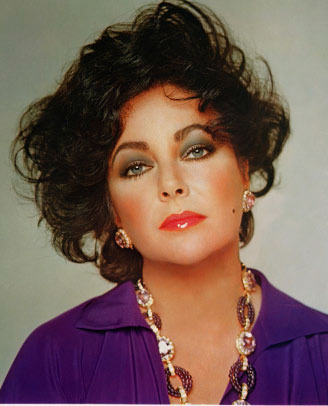 Elizabeth Taylor’s violet eyes were legendary. She frequently chose purple outfits to enhance the color. She even had her dressing room painted mauve at least once on the 1963 set of The VIPS presumably to compliment her eyes. Ms. Taylor’s celebrated eyes inspired Mr. Burton to purchase the Triphanes purple necklace and ear pendants of amethyst beads, oval-shape Kunzite, diamonds and yellow gold by Van Cleef & Arpels in 1973 for a ninth anniversary present.

The 19¼-inch long necklace centers on a detachable pendant with a luminous 55.70-carat Kunzite. The ear pendants and necklace appeared on Elizabeth Taylor consistently. In 1975, she put on the necklace for a Bob Penn portrait with Richard Burton in Israel. She modeled the necklace and earrings (without the pendant drops) and a purple blouse in 1982 for the famous lensman Francesco Scavullo. When the actress received the 1999 Academy Fellowship Award from the British Academy of Film and Television, she went to the event in the Triphanes set.

One of Elizabeth Taylors most beloved Van Cleef & Arpels gifts from Richard Burton was the stylish 1971 Sèvres sautoir. The design is composed of circular and rectangular gold links ending in a large circular motif. Diamonds accent the textured gold surface of the 29-½ inch long necklace. The jewel was convertible and could be taken apart and worn as several bracelets.
Several pictures show Elizabeth Taylor wearing the necklace in the 1970s. She put it on July 5, 1973, the occasion photographers captured her disembarking from a plane in Los Angeles with her adopted daughter Maria Burton about to face reporters waiting on the tarmac to ask questions about her announced separation from Mr. Burton.

Over the years, Elizabeth Taylor continued to wear the necklace casually and formally. In 2001, when she received the Presidential Citizens Medal from Bill Clinton for raising over $200 million to benefit AIDS research, Elizabeth Taylor accepted the award at the White House in the Sèvres necklace. 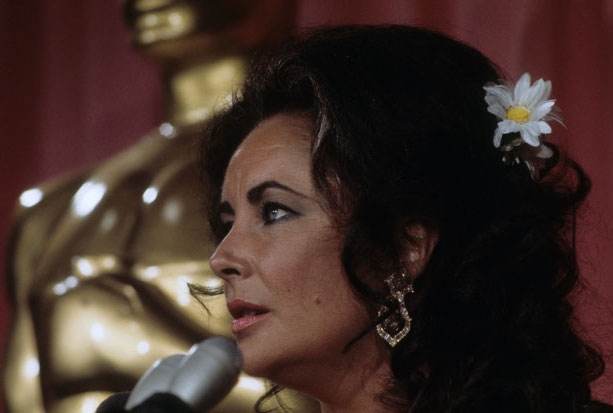 For their tenth wedding anniversary on March 15, 1974, Richard Burton presented his bride with a 33.81-carat pear-shape cognac and white diamond ring and ear pendants featuring two pear-shape cognac diamond drops weighing 7.87-carats and 6.83-carats. Claude Arpels notes from the period on the largest diamond say the stone is, “very rare in this size and the best shade of cognac.”
The month after Elizabeth Taylor received the Van Cleef & Arpels suite, she debuted the jewels to a vast audience at the Oscars where she presented the Best Picture Award to The Sting. A memorable ceremony, right before the actress took the stage, a streaker ran across it while David Niven was introducing her. Elizabeth Taylor frequently wore the jewels after the Academy Awards. Sometimes, she removed the cognac diamonds from the ear pendants and just wore the round and baguette-cut white diamond frames as she did in 1993 when the American Film Institute bestowed her with the Lifetime Achievement Award.

In 2000, Queen Elizabeth made British-born Elizabeth Taylor, who had long been Hollywood royalty, a Dame Commander of the Order of the British Empire. For her investiture, Elizabeth Taylor added one of the final pieces of Van Cleef & Arpels jewelry to her collection: a pair of coral, diamond, yellow sapphire and cultured pearl pendant earrings created exactly to her specifications.
She asked Van Cleef & Arpels to make the Rose de Noël flower earrings into pendant earrings with six of the firm’s gem-set butterflies. Eight pearls linked the pieces together and diamonds are suspended from the bottom. After the ceremony with the Queen in London, Dame Elizabeth Taylor was photographed wearing the pendant earrings and her insignia medal pinned to her purple suit.