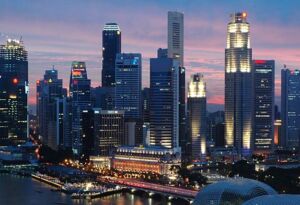 As expected property still remains the most favoured type of investment for the wealthy. The latest research from Knight Frank’s Wealth Report 2011 shows that wealth has been created markedly at a remarkably rapid rate, especially in Asia. A Global Attitudes Survey was jointly undertaken by Knight Frank and Citi Private Bank to reflect the sentiments of almost 5000 Ultra High Net Worth Individuals (UHNWIs) with an average worth of more than $100 million each. According to the survey, property makes up 35% of the average UHNWI’s investment portfolio and is the most important investment after their own business.

East Asia Leads the World’s Rich Revival
The increase in the number of Chinese HNWIs led to a new rise in the world’s wealthy. For 2010, the growth of wealth for HNMIs in Asia Pacific grew by a staggering 35% year on year. The emphasis on property and growing wealth is evident from a recent Knight Frank study that shows a significant jump in the number of Singapore apartments/ condominiums bought by Chinese nationals who were not PRs. Chinese citizens overtook Indonesians to emerge as the biggest group of foreign buyers (PRs and non-PRs) of apartments and condominium in 1Q 2011. This trend is set to perpetuate as the wealth of these HNMIs continue to grow. In an interview with US investor Jim Rogers, he shared his views on the huge potential of China being the most important country of the 21st century. China’s vast population, as he reckons, saves and invests 35% of its income. According to Forbes, China was ranked the 35th country in the World by the number of billionaires in 2005. In 2010, it was second only to the United States of America.

Property is the Second Most Important Class of Investment
Property as a class of investment amongst East Asian UHNWIs was ranked second in term of importance. The top emphasis was business. UHNWIs entrepreneurs ranked Singapore sixth in terms of attractiveness below the likes of Shanghai, Hong Kong, Beijing, New York and Mumbai. UHNWIs Hedonists ranked Singapore thirteenth with New York standing at the top position. Singapore did not come within the top 20 countries among the UHNWIS romantics.

Singapore as Top Choice for Education and Second Home Purchase
The Attitudes Survey reveals that up to 37% are actively considering buying a second or third home in 2011 and education is one of the primary reasons for second home purchases. Singapore is the second top location for the UHNWIs in East Asia in particular the Chinese and Indians, to buy second homes. The quality of education in China and the rest of Asia are improving at a rapid pace. Based on some key yardsticks, the quality of the education in Asia compares favourably with those offered in the West. UHNWIs attitudes towards residential purchases reveal that education of children is one of the primary reason driving UHNWIs second-home purchases, especially among East Asian UHNWIs. Besides the UK and the US, other top choice locations for education are Canada, Australia, New Zealand, Hong Kong and Singapore.

Singapore being a first choice location as the principal residence for East Asia UHNWIs
When it comes to principal residence, Singapore is the first choice for East Asia UHNWIs, especially Indian. In addition to the stable political and economic condition, Singapore also offers favourable taxation policies to these wealthy individuals. The pricing of the Singapore luxury property market is much lower than other countries such as Hong Kong, Tokyo, Paris, London and Monaco. The Knight Frank Prime International Residential Index (PIRI) showed that globally, the three strongest prime property markets in terms of capital appreciation in 2010 were Shanghai, Singapore and Mumbai, all achieving strong double-digit growth. Prime residential market in Singapore, Shanghai and Mumbai saw year-on-year price increase of 18%, 21% and 20% respectively. The high growth was attributed to increasing demand, augmented by strong employment, high quality of education and upscale lifestyle-driven purchases.

Singapore among the Top Choices for UHNWI
The Wealth Report also reveals that Singapore is currently the fourth choice among the world’s top 40 cities for UHNWIs after New York, London and Hong Kong.