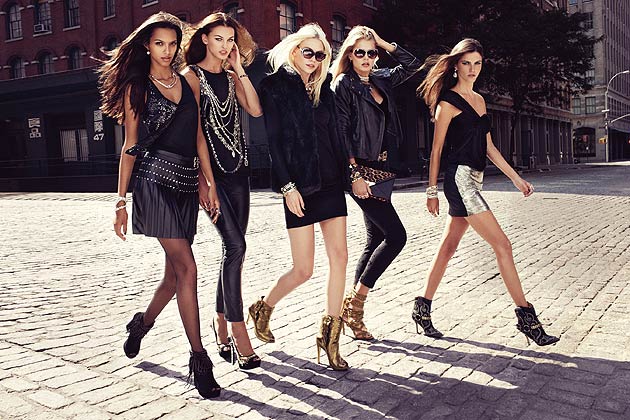 The concept evokes, exudes and celebrates the spirit and ethos of the Nine West brand.  By depicting archetypical genres of women- Party Girl, Rocker Glam, Bohemian, Classic and Street Chic- Nine West clearly reinforces its fashion versatility, trend leadership and global reach.  Launching worldwide at the end of August, Nine & the Gang is a global platform for the brand that will include digital story telling and a multimedia presence.

Nine West partnered with Lloyd & Co, a New York based creative agency specializing in fashion and luxury branding and advertising, to execute the campaign.  Doug Lloyd, Founder and Creative Director of Lloyd & Co, said, “The Nine West campaign is an unforgettable fashion story that’s all about design, direction and discussion.  It’s a conversation that all women will want to be a part of and can relate to.  Together we have created a global brand platform for a life beyond print.”

The campaign features a group of girlfriends, portrayed by models Aline Weber, Ali Stephens, Lais Ribeiro, Tori Praver and Jeisa Chiminazzo, which was styled by W Magazine’s Fashion and Style Director Edward Enninful.  Captured by famed photographer Craig McDean, who has worked with fashion brands including Gucci, Giorgio Armani, Calvin Klein and Yves Saint Laurent as well as publication such as Vogue, Harper’s Bazaar and i-D, the campaign was shot around New York City.

Nine West will debut the campaign on Ninewest.com at the end of August.  Beginning in September, it will roll out in The New York Times and national print publications for the October issues of Vogue, Elle and InStyle as well as online at Refinery29.com.  Additionally, the campaign will be supported through the brand’s social media network (Facebook and Twitter) along with an in-store (video screens at Nine West Flagship Store & in-store signage) and out-of-home (Soho billboard, Taxi TV & Taxi Tops) program.

Nine & the Gang’s fun, fashion-aware and on-trend concept will continue into 2013 in order to inspire and unite consumers to shop, share and rally behind their personal communities