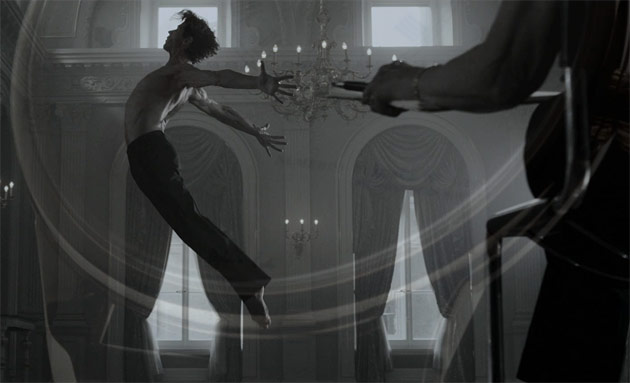 Stéphanie Barba’s intensely full and varied life is impossible to sum up in a few lines. She was born with a gift: she could draw. Everything she sees has a rhythm that passes from eye to hand, and the end result is a drawing, a watercolor, a charcoal sketch. 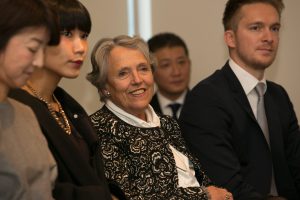 As a watercolorist, she looked out from the shore, capturing the coastline in its ever-changing procession of moods. From fleeting landscapes, barely glimpsed yet already transformed, her watchful gaze sought the same transience in human movement. A chance encounter gave her access to the rehearsals and shows at the Paris Opera and the chance to see the leading companies that all came to perform there. She met the highly acclaimed Maurice Béjart in 1983, which turned out to be a revelation.

His first words were precise in their instruction: “Madame has asked if she can draw. – Yes, as long as I don’t see her.” 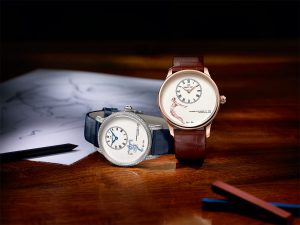 Jaquet Droz and the Béjart Ballet Lausanne became inseparable partners in 2013. The watchmaking firm is part of the life of the company, supporting its work and sharing its values of rigor, technical mastery and a futuristic vision of its oeuvre.

As the relationship developed, the brand known by its twin stars became closer to the Béjart Ballet Lausanne and its artistic director Gil Roman. At a certain point, the name of Stéphanie Barba was mentioned as the draftswoman who brought the dancers to life on paper, paying tribute to the ballets, to the gracefulness of dance, but above all to movement.

Jaquet Droz set up a meeting. The firm discovered the work of an artist with a passion for dance and Maurice Béjart’s choreography especially. The sketches were unique; the technique was there. It was all the watchmaking brand needed to initiate a new collaboration and pay its own homage to dance through the work of Stéphanie Barba.

The drawings
A portfolio of twenty sketches inspired by The Rite of Spring held an immediate attraction for the Ateliers d’Art. The brand’s artisans selected two.

First, “The Vulture,” a magnificent opening of the dancer’s body and one of the movements most characteristic of Béjart’s choreography: “It takes us back to the beginning of time; Stravinsky’s music is like the sound of a relentlessly pounding hammer – primitive, threatening, troubling and heavy.”

Then, “The Chief,” a sketch in red chalk taken from the moment in the ballet when two men fight to rule the tribe. “Rather like a conflict between rutting stags. The music soars, clashes, falls, resumes, concluding triumphantly when the winner becomes the new chief.”

To give Stéphanie Barba’s drawings full expression, Jaquet Droz chose the dial of the Petite Heure Minute. Its design, unique to the brand, and the generous space it provided would bring the sketches alive.

Available in white gold with a 39 mm diameter and diamond-set lugs and case, together with a blue alligator strap to further enhance the diamonds, the timepiece featuring the Vulture is set to become a model of genuine distinction.

The 43 mm version in red gold with a brown crocodile leather strap shows the red-chalk sketch of the Chief and will appeal to those who harbor the soul of a leader.

The drawings are painted by hand on the enamel dials and engraved on the oscillating weights, making these pieces true works of art. There are 28 pieces of each.