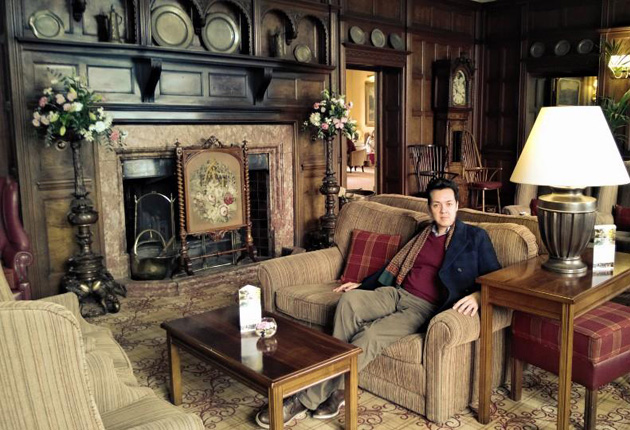 During April I decided to make a pilgrimage back home to the UK, my first visit to my beloved homeland in six years. The visit was to be for just over two weeks and included media engagements in Southern and Northern England, Scotland and the City of London.

The individual parts of my visit included a trip to the Rolls-Royce Motor Cars Head Office in Goodwood, test drives, food reviews, a meeting with the world’s oldest diamond merchants, Backes & Strauss in Mayfair, London, Armathwaite Hall in the English Lake District and Floors Castle and the Roxburghe Hotel and Golf Club in Scotland, much of which will be published soon. Another very important aspect of my visit to the UK was that in my role as an ambassador for one of the world’s largest luggage and lifestyle firms – TUMI, I was asked to create a handwritten diary of my trip that will be exhibited and given too much of the leading press in Asia. I chose to travel with Air France/KLM for this trip and much to the annoyance of my wife suggested that we fly economy class, citing the obvious that the money we save, I could spend on her. I know some of you will be thinking it odd that I decided against flying at least business class, however I had never journeyed with Air France or KLM, had not tried economy long-distance in many years and thought to myself that it’s a European airline group so should be good and it was only one day out of my life, how uncomfortable could it be?

I and the Luxurious Magazine team pride ourselves on being open and transparent so I informed the marketing department of Air France/KLM what I would be doing and suggested that if possible they try to make my trip as smooth as they could as it was to form part of a press feature to be read by millions of people around the world. The airline armed with full the knowledge of who I am and what I was to be doing generously provided me with two tickets to their lounge at KLIA.

I had some prototype equipment kindly given to me by Hong Kong manufacturer – Gazer for the filming portions of our trip, I thought long and hard whether to fly down from Penang to KLIA but didn’t want to risk adding another flight to our already two flight trip (KLIA, Amsterdam, and Manchester). Although I have never had any luggage lost or misplaced in my many years of travel, there is always that risk that it might happen and when carrying unique prototypes, equipment safety had to come first.

We decided to drive down to Kuala Lumpur from our beach-front home on Penang Island, encountering the usual heavy rain, kamikaze drivers and traffic jams, however spirits were still high and the excitement of a trip to the UK continued to build. After a relatively smooth check-in we took the airports Aerotrain to the departure terminal. We eventually found the lounge indicated on the complimentary tickets and waited in a small queue to enter. I was always under the impression that lounges were a place of solace and tranquility reserved for those that purchased a business or first class seat so it came as a shock when I overheard the person in front of me being offered the opportunity to pay by the hour to enter the lounge thus meaning that it was available to anyone?

The lounge was packed and it took a good few minutes to find two adjacent seats for us to sit down, high bar stools were available but after a six hour drive down not very enticing. Luckily a couple had decided to leave so we jumped in before others circling vulture-like for a smidgen of comfort beat us to them. My first impression of the lounge was that I wouldn’t have paid for this and if it was where the first and business class passengers were to unwind before departure I would have been sorely disappointed if I was one of them.

My opinion of the lounge may have been influenced by the sprawling mass of people crammed in and around me, but I kept thinking of those two words synonymous with airport lounges – solace and tranquility which were evidently non-existent here. The complimentary food selection was at a stretch just about adequate, the non-alcoholic drink selection was slightly better but the overall ambiance was nothing like the lounges we had experienced in Dubai, London etc. After 30 minutes trying to rest and taking a few photographs in the lounge to share on social media I decided to look at the departures screen to get my bearings and was shocked to see that our flight indicated ‘boarding’ – we hadn’t heard any audible announcement and if there was one given it would have been nigh impossible to hear it over the raucous conversations going on in this packed bar-like lounge. Suitably stressed we ran to our departure gate, using the relatively empty horizontal escalators.

Yes, we did get there in time, albeit rather sweaty, but was the Air France leg of this economy trip, the seating and service going to improve on what had in our mind been an already poor start? Find out soon…