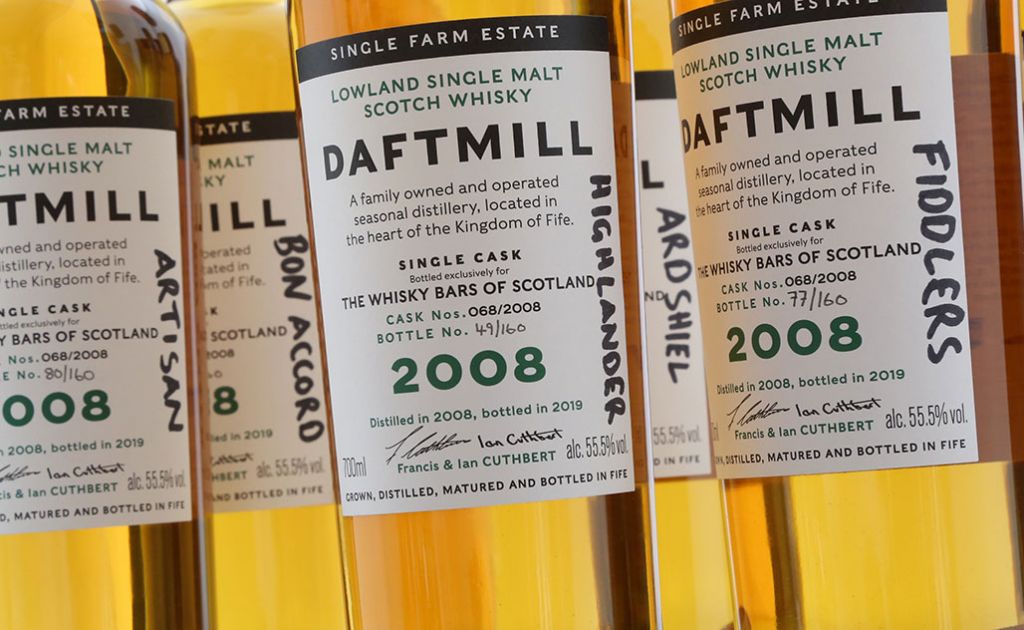 Held last Saturday on World Whisky Day (16 May), the auction, which included seven bottles of the highly collectible Daftmill 2008 Single Bourbon Cask #68 and an exclusive tour of this Lowland distillery which is not usually open to the public, reached a grand total hammer price of £35,300.

252 bids were placed from countries including Japan, the USA, the Netherlands, Germany and the UK as whisky lovers took part to be in with the chance of snapping up a bottle of this rare whisky, in what was the first time it was available for purchase.

The seven whisky bars in the Independent Whisky Bars of Scotland will benefit from a donation of £4,941.53 each to support them during the current COVID-19 crisis. Bars include The Ardshiel in Campbeltown, Artisan in Wishaw, the Bon Accord in Glasgow, Dornoch Castle Hotel in Dornoch, Fiddlers Inn in Drumnadrochit, The Highlander Inn in Craigellachie and The Malt Room in Inverness.

Iain McClune, Founder of Whisky Auctioneer said: “The results of this special online auction more than exceeded our expectations, with generous whisky collectors around the world embracing the rare chance to get their hands on this one of a kind Daftmill expression, whilst helping Scotland’s independent whisky bars.

“We’re very proud to do our bit to help some of Scotland’s independent bars with this auction which will hopefully provide them with a boost in what are extraordinarily tough times for the on-trade sector.”

Derek and Fiona Mathers, owners of the Artisan bar in Wishaw, commented: “We are truly stunned at the generous bids that these Daftmill bottles received and are so grateful for the financial help from Whisky Auctioneer at this difficult time.

“Like most bars, we rely on sales from our customers and tourists, but due to current restrictions, we have had to cancel 22 whisky functions. We hope that the sector can return to some sort of normality soon, but this generous donation has helped to ease our worries.”

Colin Thompson, Managing Director at Dornoch Castle Hotel added: “We are delighted and amazed at the result of this auction and would like to thank everyone who bid for their efforts and contributions. It’s been a tricky time for our industry, and this initiative has certainly helped us all.”

Initially bottled in partnership between Daftmill Distillery and Berry Bros & Rudd to support the Independent Whisky Bars of Scotland, Cask #68 was sold ‘by the dram’ at their venues in what was described as an industry first. The expression is the first single cask bottling to be released from Daftmill’s 2008 vintage stock.

Whisky Auctioneer’s next online auction will take place this Friday, 22 May 2020, which will include the first 20 bottles of whisky ever to be produced by Aurora Spirit Distillery in Norway – the world’s northernmost distillery.

Read more articles and guides on wines and spirits here.

A Bonnie Burns Night With Whisky From Sacred Spirit