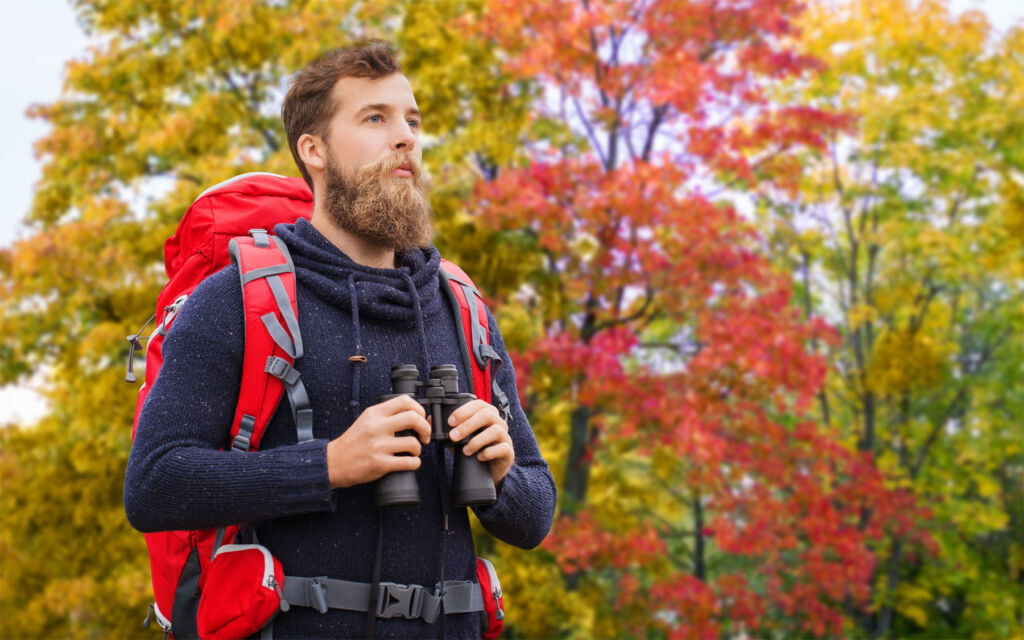 When people worldwide think of the UK, many will conjure an image of rolling hills and beautiful countryside. However, something is missing from this idyllic picture. Over the years, the UK has seen an alarming drop in its wildlife diversity; even now, 26% of its mammal species are at risk of disappearing altogether. Fortunately, plans are afoot to reverse the situation.

As much as the UK tries to position itself as a world leader, there’s one area where it would rather not lead the world, and it concerns the loss of wildlife species. As surprising as it might seem, given the global vision of the country as a picture-perfect, nature-friendly paradise, the UK is one of the most nature-depleted countries in the world, with only 50% of its natural wildlife still intact¹. And rather embarrassingly, it sits in the bottom 10% for wildlife diversity around the globe.

However, a series of recent rewilding projects are underway to help re-populate the British countryside with species, many of which have not been seen on our shores for hundreds or even thousands of years.

In 2020, the UK government pledged to recover nature across 30% of British land by 2030² by re-introducing native plants and animals into their natural habitat. Whether this becomes a reality is another matter altogether, as money and progress seemingly trump all.

To help shed some light on how the country is addressing this, our friends at Verdant Leisure have produced a guide for us, incorporating the views of Jack Cole, the Project Coordinator at Restore Our Planet, who explains why the rewilding projects³ are so important. 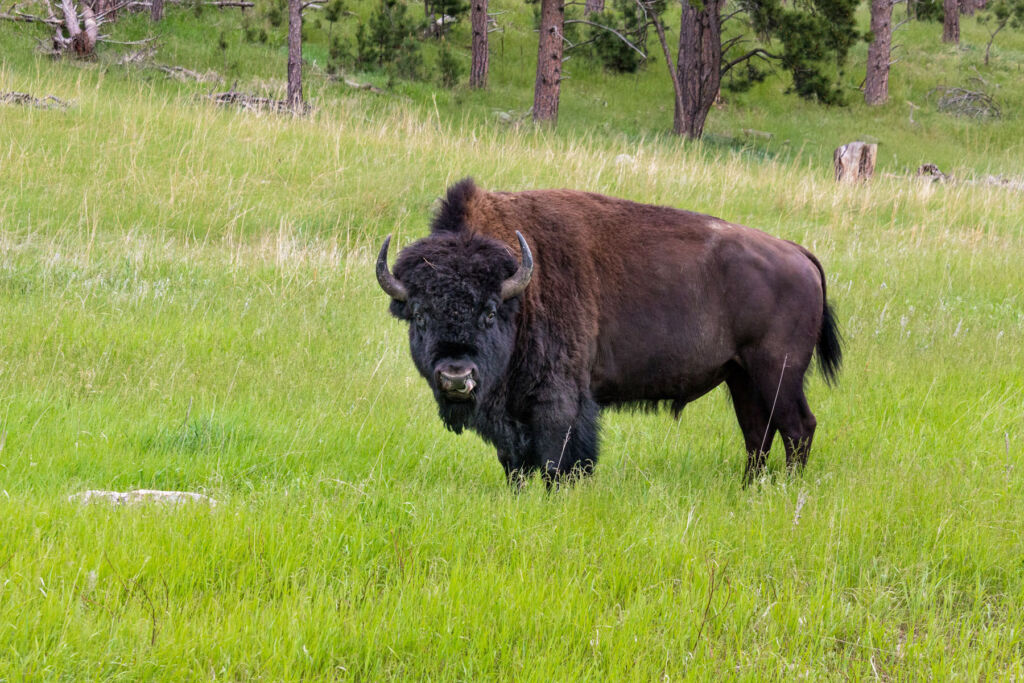 In 2022, the European bison was re-introduced to the woodlands in Kent in an effort to recover and manage the area. Before the project began, bison species had been extinct in the UK for 6,000 years. In fact, there are only two remaining bison species on the planet (the European bison and the American bison), and now, thanks to The Wilder Blean project, one species resides in the UK.

Jack commented, “What is now the UK’s largest land mammal is set to transform our ecosystems by felling non-native trees and encouraging the return of invertebrates such as stag beetles and other insects, which in turn provide food for small mammals and birds. These gaps in the canopy allow sunlight to reach the previously barren forest floor to stimulate the growth of new flora. 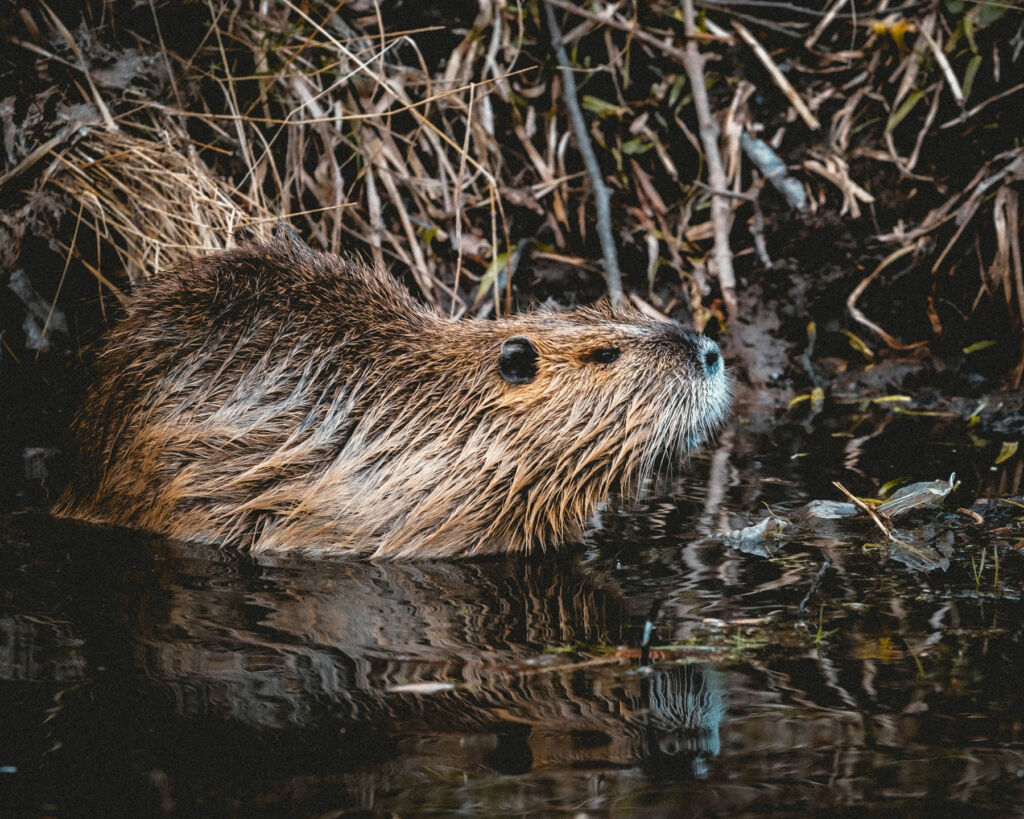 Location: Argyll, Tayside and Devon
Last wild in the UK: 400 years ago

Europe’s largest rodent, the beaver, has been re-introduced across the UK since 2002 after being hunted to extinction roughly 400 years ago. While re-introduction continues to be carried out in Devon, Beavers have now been declared a native species, granting them legal protection under the law.

Jack said, “We can already see the positive impacts that beavers are having on our landscape even in tiny populations, work of which began in Scotland in 2001 with their first re-introductions. We are just learning some of their effects; for example, this summer, some depleted river systems dammed by beavers kept local soils hydrated during the severe drought. This shows that beavers might have a vital role to play against our future threats of climate change.” 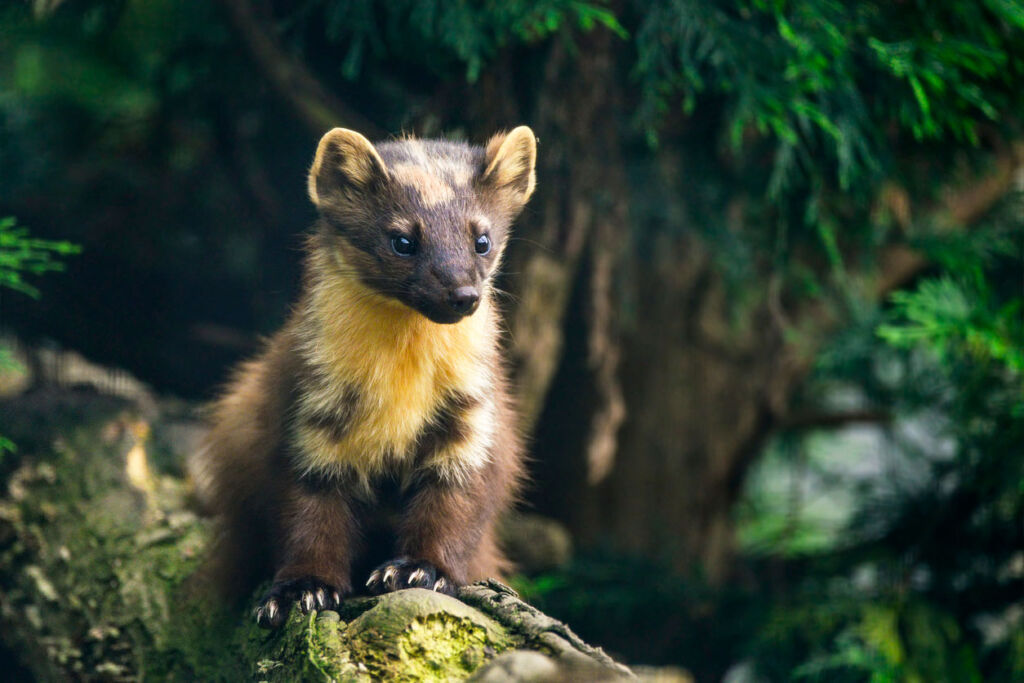 Close to extinction, efforts to re-populate pine martens in the UK began in 2016 with legal protection and conservation efforts. While pine marten recovery has been successful in Scotland, the South of England is still sparsely populated.

However, pine martens could soon roam free in the Southwest of England for the first time in 150 years in an attempt to re-introduce them to the area. Organisations are working closely with Exmoor and Dartmoor national parks to release the mammal in 2024.

Jack explained, “Members of the mustelid family, which also includes species such as otters and badgers, pine martens crucially out-compete invasive grey squirrels for resources, and it is believed, though not certain, that they also hunt them as prey. This is of high importance to restoring British ecosystems as they coexist with the much smaller and desperately low populations of native red squirrels, which will then hopefully increase. They also hunt grey squirrels though we cannot be certain yet at what scale.” 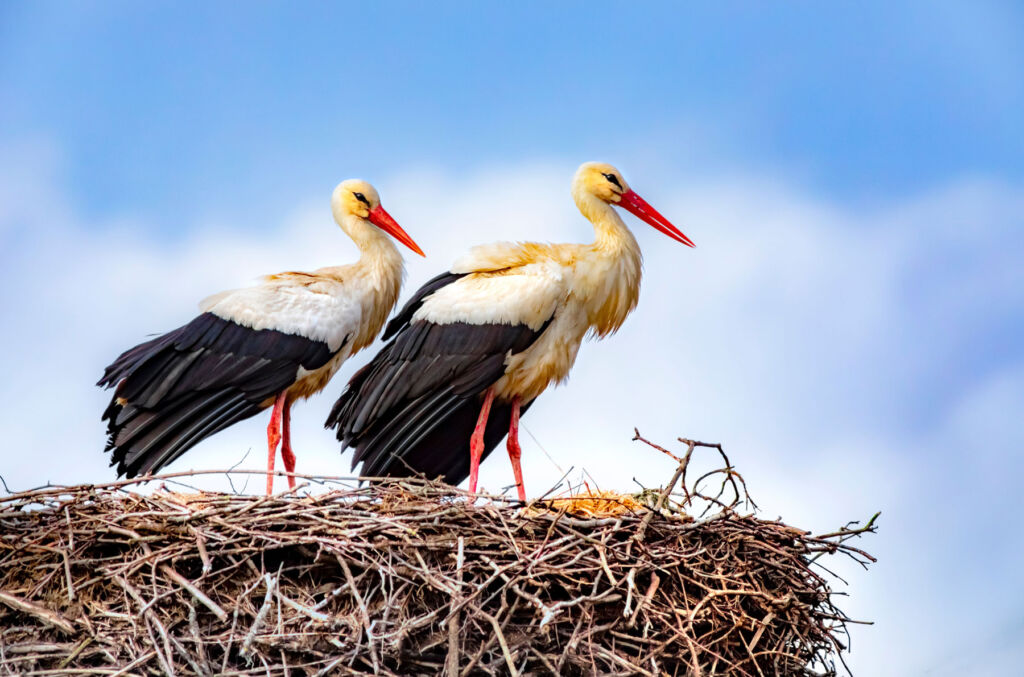 Location: Sussex
Last wild in the UK: 500 years ago

The white stork, a large bird once native to Britain, will make a return to the Southeast of England by 2030. The five-year release plan has already seen chicks and juveniles successfully re-introduced in Sussex, with further developments in place.

Jack commented, “White Storks are migratory birds heavily reliant on using their birth sites as navigatory landmarks, which also helps for foraging. In the winter months, they migrate to Africa and rely on knowledge of their birth site to find their way back home.

“Their predatory behaviour allows for control of insect and rodent populations, benefiting farmlands and farm owners along the way. Through similar habits, high populations of White Storks will help restore wetlands and river catchments.” 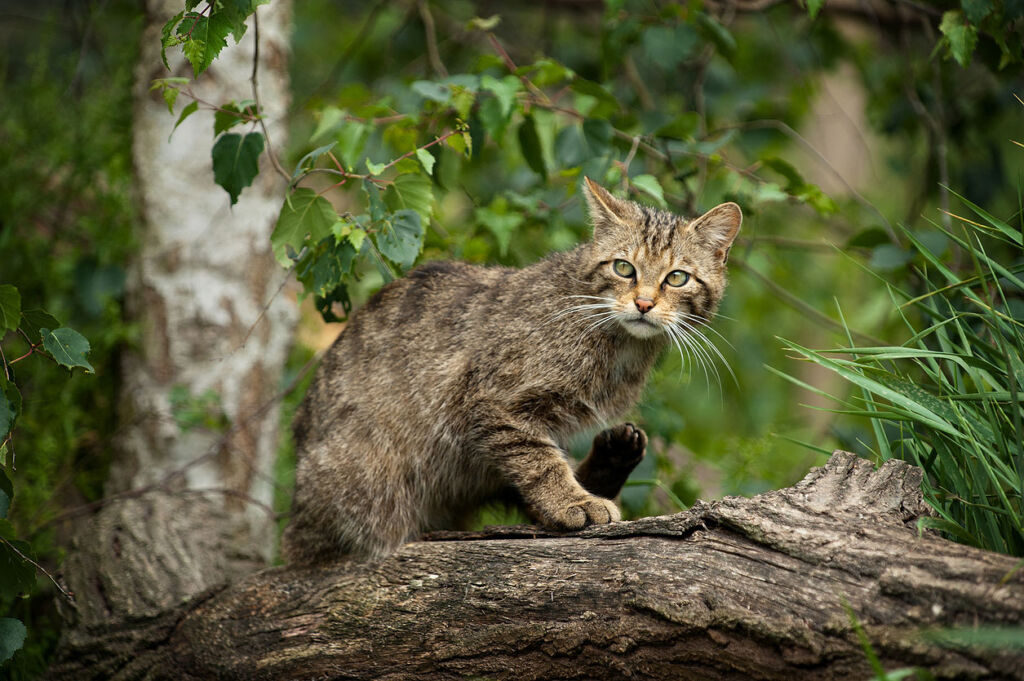 Location: Scottish Highlands, Kent and Devon
Last wild in the UK: 200 years (England only, they have always remained in Scotland)

While 300 wildcats still reside in Scotland, their functionally extinct status has resulted in a call to re-introduce the species across the UK. Plans to build breeding enclosures in Kent and Devon are the first steps in the project, despite being a few years away from fruition.

Jack added, “Wildcats have played an important ecological role in the UK for hundreds of years, and their re-introduction to England is vital in stopping their extinction. A lack of woodland has meant their re-population has been limited to Scotland thus far. To thrive, the native cats require mostly woodlands and some open hunting pasture in order to carry out their predatory nature, resulting in a controlled number of small and medium-sized animals such as rabbits and rodents, and sometimes birds and reptiles.” 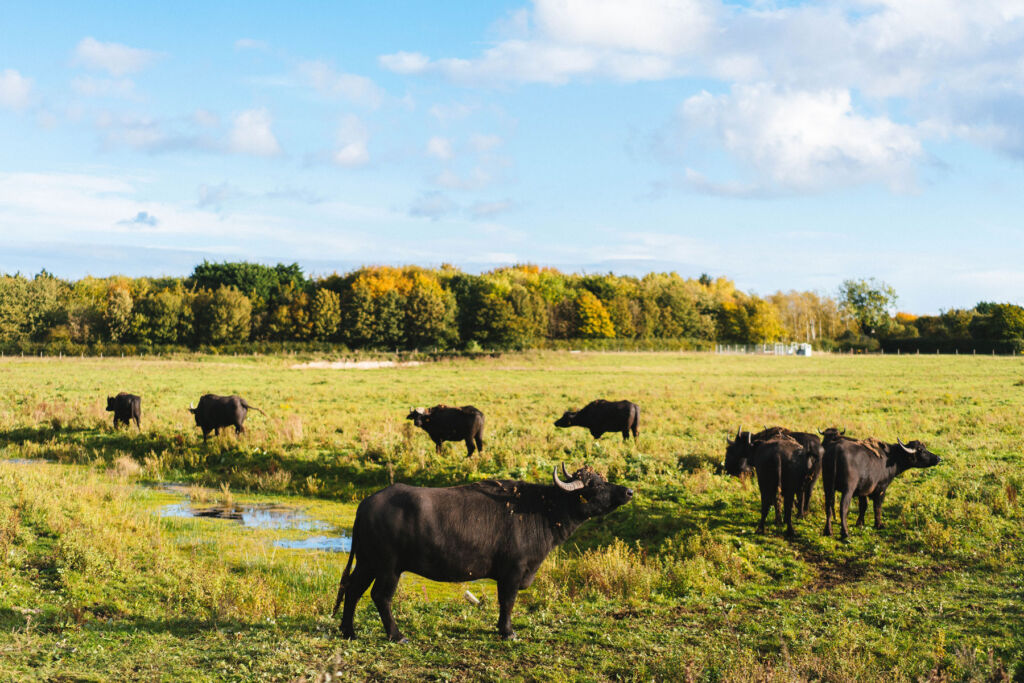 Location: Suffolk
Last wild in the UK: Not native to the UK

Alongside numerous other species, water buffalos are part of a 1,000 acre-project in Suffolk hoping to recreate a natural ecosystem. The Somerleyton Estate is now home to the giant herbivores that will graze on the countryside and improve the landscape for other wildlife, such as Welsh black cattle, Exmoor ponies and large black pigs.

Jack added, “Suffolk is the only place where Water Buffalo can be found in the wild in the UK as they are not a native species; however, their grazing habits are key to a new approach being taken to encourage natural habitats. Their feeding and trampling of the environment prevent single-plant dominance, encouraging a diversity of species.

“While the mammals are known to eat freshwater flora which supports already existing water systems, they can also create their own small watering holes if there are none already, attracting other wildlife such as birds and reptiles.”

Francesca Houldsworth, the travel expert at Verdant Leisure, commented, “Across the UK, there is endless nature and wildlife to explore, an activity suitable all year round, for people of all ages, and on various budgets.”

“Our parks are closely located to many of these wildlife hotspots, including the homes of newly re-introduced wildcats, beavers and pine martens, so visitors can adventure into the countryside with a chance at sighting some of these rare and beautiful species.” 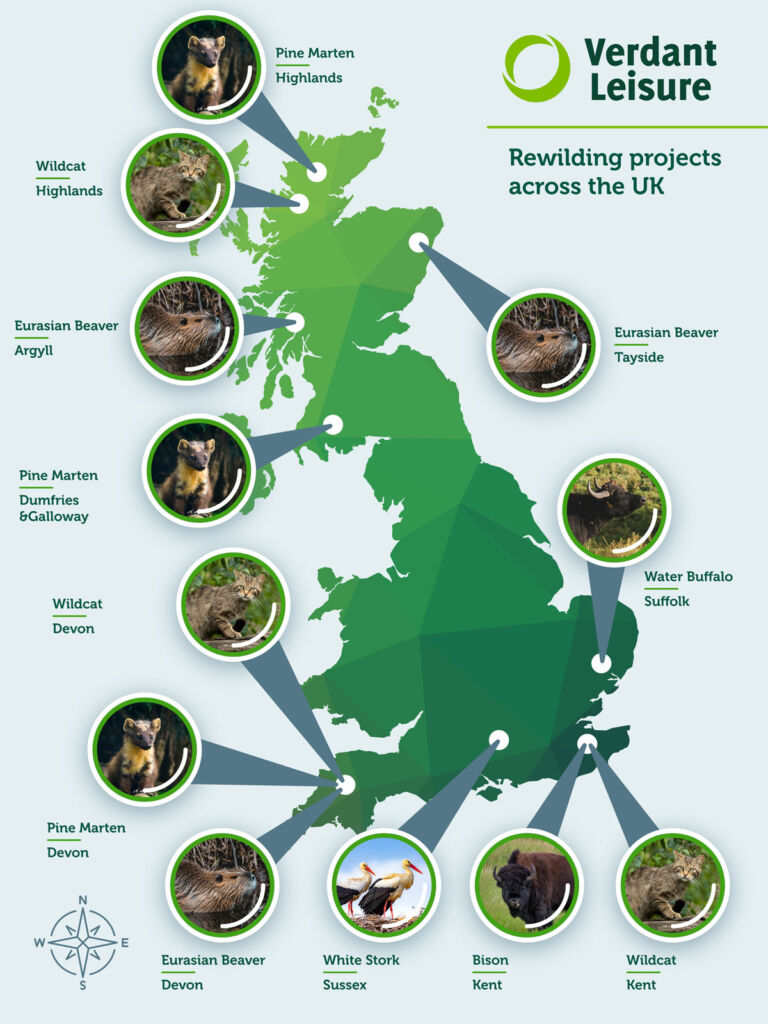