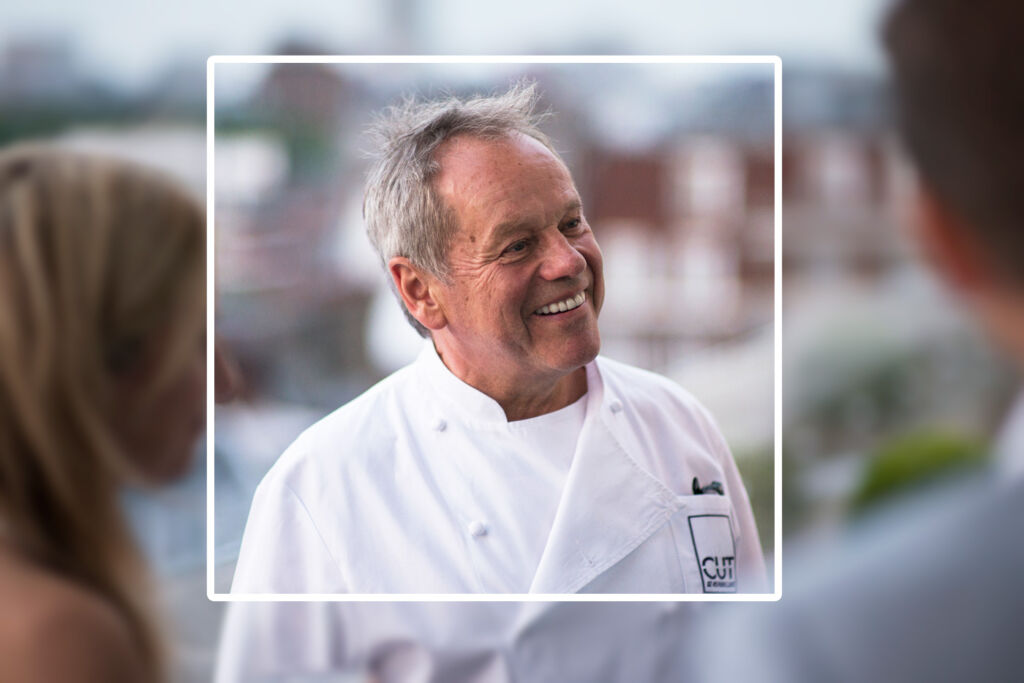 For this interview, we meet celebrity chef and global entrepreneur Wolfgang Puck, and chats food, celebrities, life and business over afternoon tea at CUT at 45 Park Lane, Mayfair.

Wolfgang Puck is one of the world’s most successful chef-entrepreneurs. From his early start peeling vegetables at a local restaurant in Austria (his mother was a chef) to creating iconic LA restaurants Spago and Chinois, as well as over 100 restaurants worldwide, consumer products, a TV series and syndicated column – the man is a phenomenon.

He opened first flagship restaurant, Spago in LA in 1982 and has been on the fast track to success ever since, catering for the Oscar’s Governor’s Ball for the last 24 years and only the second chef ever to receive a star on Hollywood’s Walk of Fame.

I met the 69-year-old phenomenon in London recently for his Chinois on Main Pop Up at CUT at 45 Park Lane. Marking the 35th birthday of his successful Santa Monica restaurant, Wolfgang brought his Asian Fusion cuisine to London.

We’re upstairs at BAR 45, a glamorous setting that has the largest selection of American wines in the UK, including Wolfgang’s own Wolfgang Puck-Schrader Beckstoffer Georges III Vineyard, Napa Valley, of which only 80 cases were made.

Wolfgang’s in his whites, looking fresh, relaxed and has the energy of a man half his age. I’m a little intimated – he’s my culinary idol.

“My group is arriving at 12,” he tells me over tea. “My fellow classmates from my Harvard business course. About three years ago a journalist asked me if I had fulfilled all my dreams. And I told him I had always wanted to go to Harvard.

“Then a few days later, Harvard Business School calls me up and asks me when I want to start!”

“I panicked at first,” he reveals. “I didn’t know how to use a computer. But it’s been brilliant – you stay and sleep in a dorm-like being at boarding school,” he smiles. “As I’ve got my pop-up here at CUT they are all coming for lunch – about 120 of them from all over the world. Next March is the last month of the course. Then we have a graduation ceremony.”

GB: What has he learnt from the Harvard experience so far?
WP: I’ve learnt how to look at the business from the outside more, and get input from different people on how to manage my company better. Also, how to give people a clearer vision of what I want. And how to structure the company more efficiently.

GB: Who’s your main right-hand man?
WP: Alex (Resnik) runs the restaurants and he’s responsible for their performance. He’ll give me suggestions if anything needs tweaking. We always want positive sales growth, so we sit down and discuss what’s needed.

GB: Which is your best-performing restaurant?
WP: Number one is Spago in Singapore – that’s our best right now. It has a huge bar and lounge with 166 seats and an amazing location on top of the Marina Bay Sands hotel. Our second best is Spago in Beverley Hills. And the third is CUT in Las Vegas.

GB: Why is Chinois so popular?
WP: Chinois was the first fusion restaurant in Los Angeles – it gave people a taste of something completely different. In the beginning, I’d never cooked traditional Chinese food and never used a wok. So I built an island kitchen at the restaurant. On one side I had three Woks, on the other a wood-burning stove and six flames. So that meant if I couldn’t use a wok I still had the flames!

GB: Did West Coast Asian influences inspire you to develop fusion cuisine?
WP: Totally! The West Coast has so many great Asian influences: we have China Town, Korea Town… I wanted to cook using local ingredients but with flavours from different cultures.

And express my take on Chinese rather than using traditional recipes. For example, instead of thickening a sauce with cornstarch I use butter. And in certain situations I use cream. I definitely didn’t want stir-fried beef – enough LA restaurants are doing this. So I decided to make a New York steak, which Americans love, and then add an Asian-tasting sauce with it. So I caramelised shallots with some chilli flakes, added some soy sauce, some mirin and stock and reduced it then finished with a little butter.

It was a whole new flavour! What was also good was that we didn’t have the history. It would be hard to do that in Italy for example with such a rich tradition. Much more adventurous cooking has originated from the west coast of America.