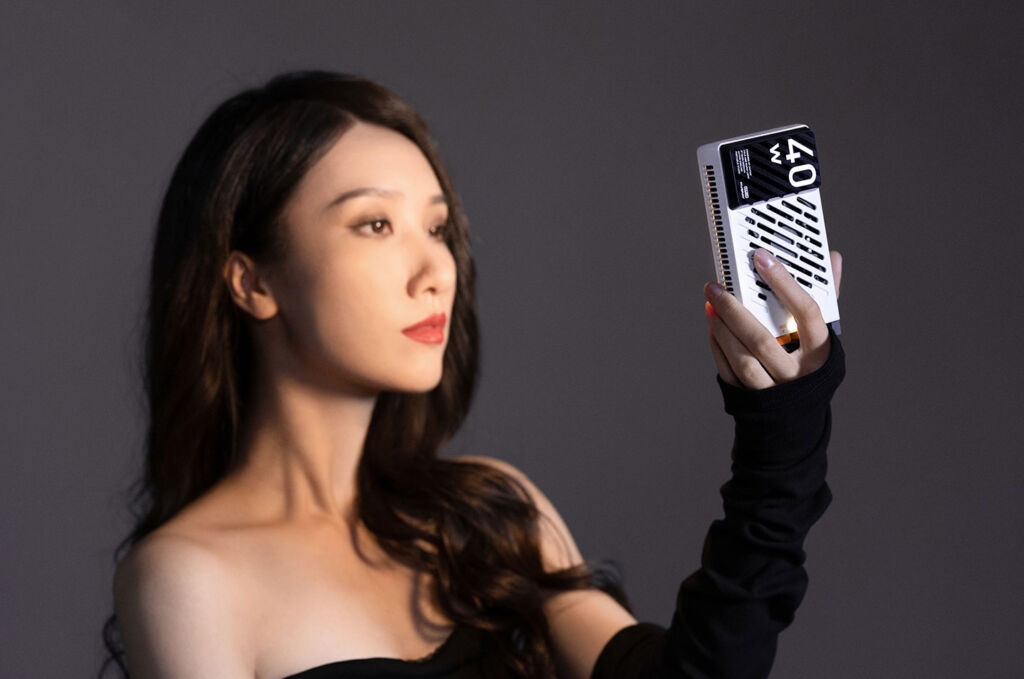 Zhiyun, the company best known for its professional quality gimbals and stabilisers, has launched a revolutionary new lighting product. In this feature, we put their brand new Fiveray M40 light to the test, which is small enough to fit in a pocket and makes life far simpler for content creators worldwide.

Over the past year or so, the Chinese tech company Zhiyun has been widening its range of offerings. The company already boasts an amazing line-up of stabilisers and gimbals for phones and cameras, with some newer models incorporating lighting solutions and microphones into their designs. Recently, the company has put its designers to the test, asking them to create professional standalone lighting solutions, and the results so far have been very impressive.

One of the most important factors in all forms of content creation is lighting. Having the correct lighting can make or break a photography or video project; however, lighting equipment has drawbacks; it’s bulky and cumbersome to transport. What content creators, particularly ones who are mobile or shoot outdoors, need is something that is both small, lightweight and powerful.

In an ideal world, a professional quality light system that would fit in a trouser pocket would be ideal, wouldn’t it? On paper, it’s one of those easier-said-than-done exercises, but not impossible, and Zhiyun has shown this with their brand new Fiveray M40. 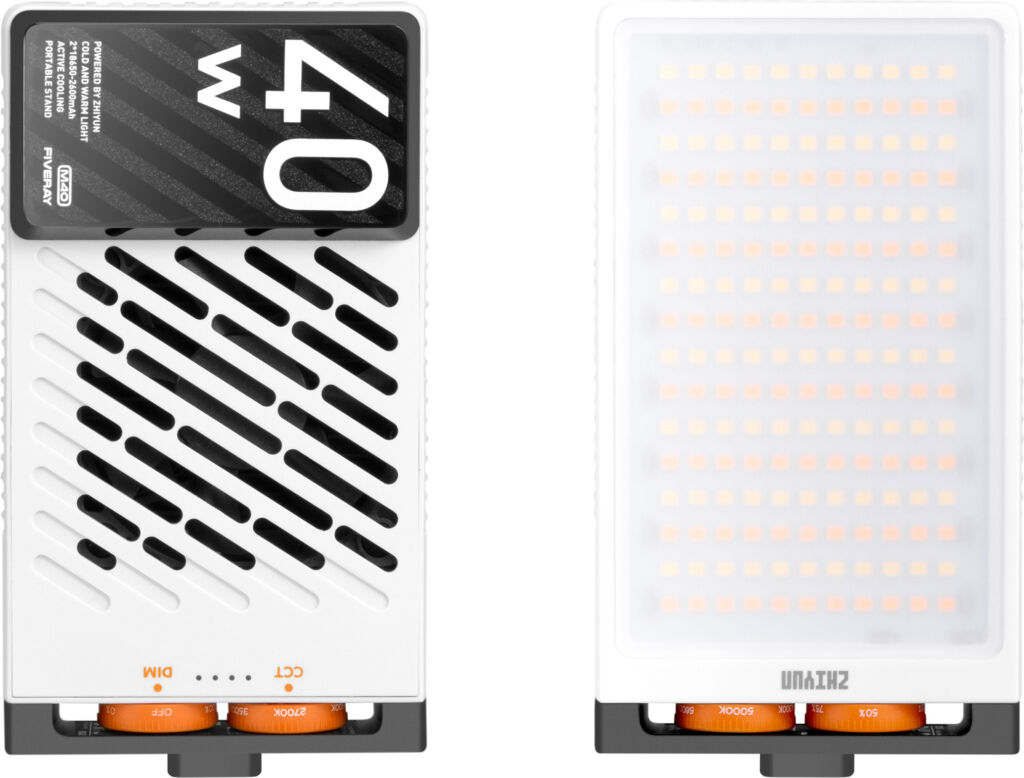 Considering what it is capable of, the Zhiyun Fiveray M40 is surprisingly small. It weighs just 320 grams and measures 13.5cm x 7.5cm x 2cm, making it ideal for handheld use. It offers cold and warm light and, as indicated by its name, has a power output of 40W, which leaves its peers in the shade as most only produce 5-13W of power.

On the technical side, it has an adjustable dual colour temperature, ranging from 2,700-6,200k and consistent power output peaks at 40W with no strobes. In addition, it has a standard fidelity offering for photography and videography, with CRI reaching 96+ and TLCI reaching 97+[¹]. 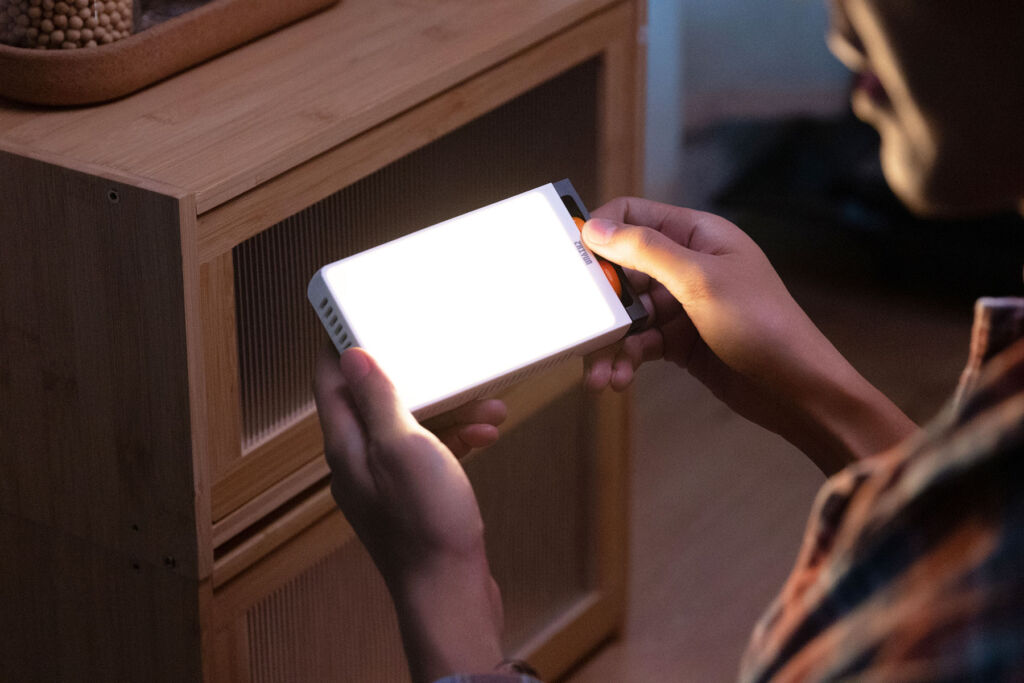 The Zhiyun Fiveray M40 contains 176 LED chips which rival the larger bulkier lights currently available on the market. All these chips result in an incredible peak illuminance of 14,000 lux. In our tests, we turned it on in pitch-black rooms approximately 13ft x 10ft in size and were stunned by the amount of light it put out; it was akin to turning on an ultra-bright lightbulb in each room. 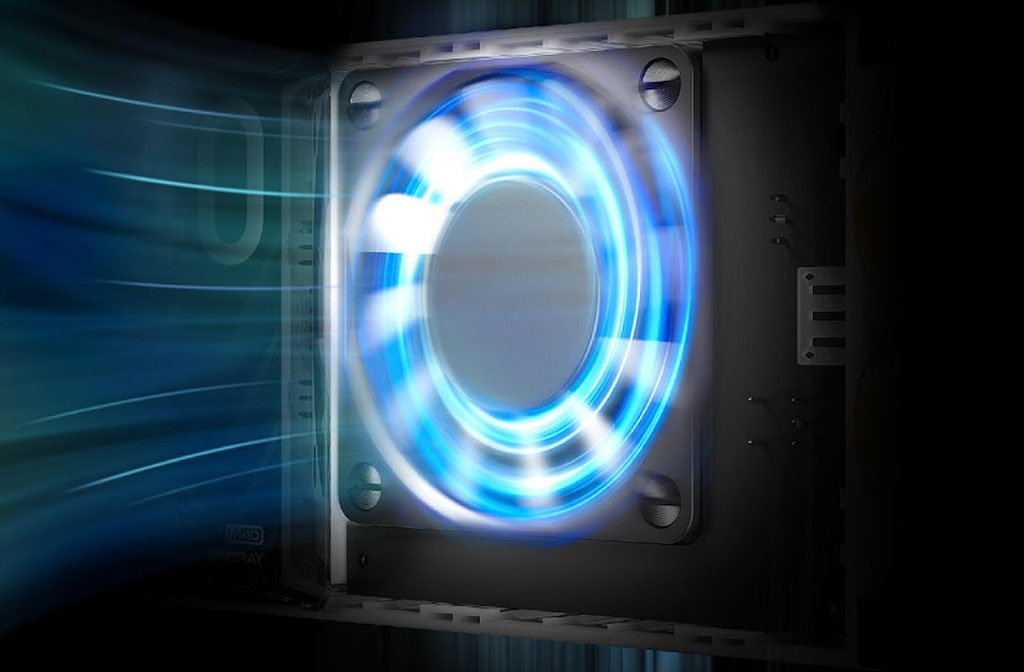 One of the drawbacks of portable lighting solutions is the high heat they generate, which frequently results in shutdowns. Zhiyun’s laboratories have addressed this problem by incorporating the DynaVort Cooling System™, which consists of a gyroscope modelling heat sink, FOC Fans and an attitude-control algorithm to prevent overheating issues. The DynaVort technology increases the M40s cooling efficiency by enhancing the airflow emissions with intelligent control. 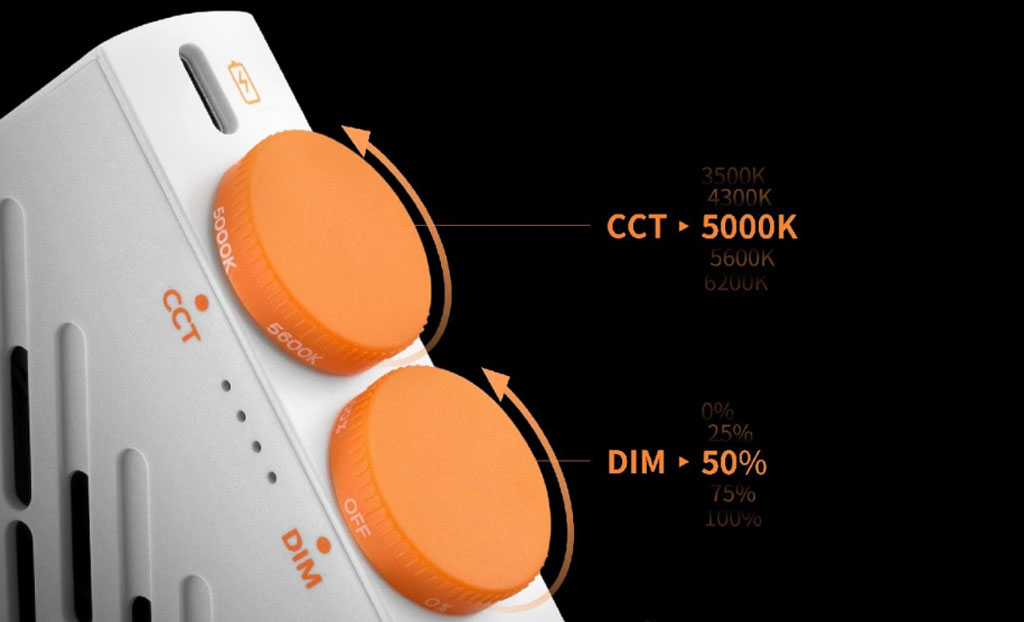 Another important factor with any new product coming to market is how it looks and the good news is the Fiveray M40 didn’t disappoint us. It has somewhat of a retro look, which has been accentuated by two traditional-style scroll dials (for CCT and Dimming) on the side of the light, the type you would see on a handheld pocket radio in the 70s and 80s. The unit we tested was white, and the dials were bright orange, conjuring up memories of walkman radios and cassette players from days gone by. 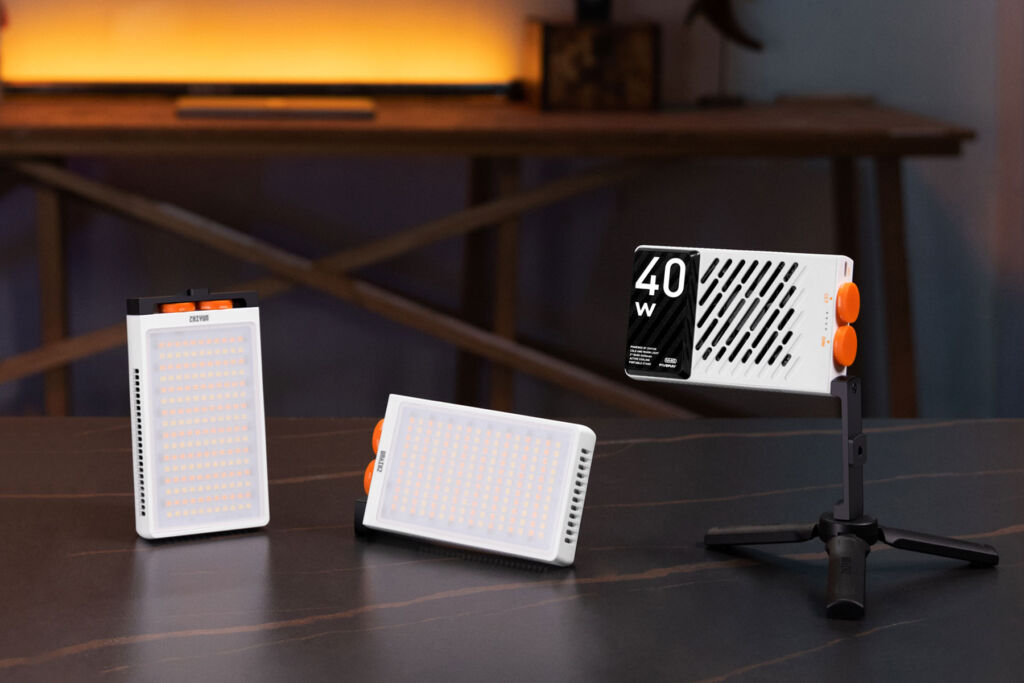 Covering the two orange dial controllers and the USB port is a foldable black plastic cover, which doubles up as a useful stand. In addition to this, the Fiveray M40 also has two 1/4″ screw holes, allowing you to mount it on a tripod or light stand.

Power usage is another major concern with any portable lighting system. Most cordless lighting products, particularly at the maximum output, will drain batteries in no time at all. Once again, Zhiyun has thought of this, and they’ve incorporated real-time charging into the unit, which means you can charge it via a power bank while still using it [2].

Zhiyun Ceo Yilun Liao said, “We are passionate about using breakthrough innovations – whether with our iconic gimbals or our new FIVERAY lighting devices – to simplify and reshape content creation. With several industry firsts under our belts, including the M40’s DynaVort Cooling System™, our products offer full creative control and convenience for anyone wanting to experience and express their inner filmmaker.”

Final thoughts
Zhiyun’s Fiveray M40 is a great product. The big plus points for us are being able to use it for nigh-on half an hour before it needs recharging, and, obviously, the incredible amount of light it produces, which, excuse the pun, is quite dazzling. 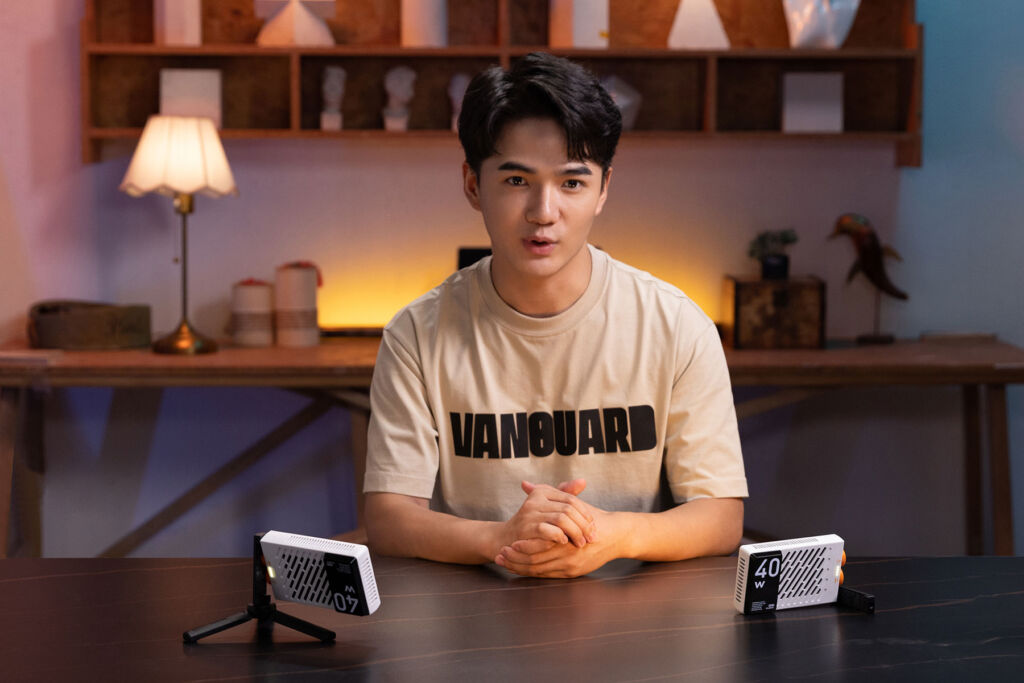 Its portability makes it the obvious choice for those looking for an alternative to the bulky equipment they are currently carrying around, and its retro looks mean it won’t look out of place on an office desk, ready to help with those all-important video calls.

Other areas where the Zhiyun Fiveray M40 shines
While testing the Zhiyun Fiveray M40, I realised that this lighting system offered another important benefit. Many countries are battling an energy crisis, and there is now a real possibility of rolling energy blackouts, over the winter months, particularly in the western European nations. Should this happen, emergency lighting will be invaluable.

The Fiveray M40 produces white and warm light, and its output seemed to be at least as effective as a decent LED lightbulb. I, therefore, wanted to conduct a test to see if it could take the place of a lightbulb in the living room.

Zhiyun Tech is a very innovative company; in addition to making their products as portable as possible, they’ve also designed them to be usable while they are being charged.

With this in mind, I connected a fully charged Fiveray M40 to a Chinese-made SelectID 5,000mah power bank. The power bank wasn’t fully charged; in my estimation, based on the LED readout, it was holding a charge of approximately eighty per cent. I set the scroll wheel on the M40 to around 60-70 per cent of its lighting power, which I felt was a good match for the LED bulb.

To create the correct ambient light, using its kickstand, I placed the light on the window sill, casting the light at a slight upwards angle. The test lasted just over three hours, and during this time, the Fiveray M40 behaved impeccably. 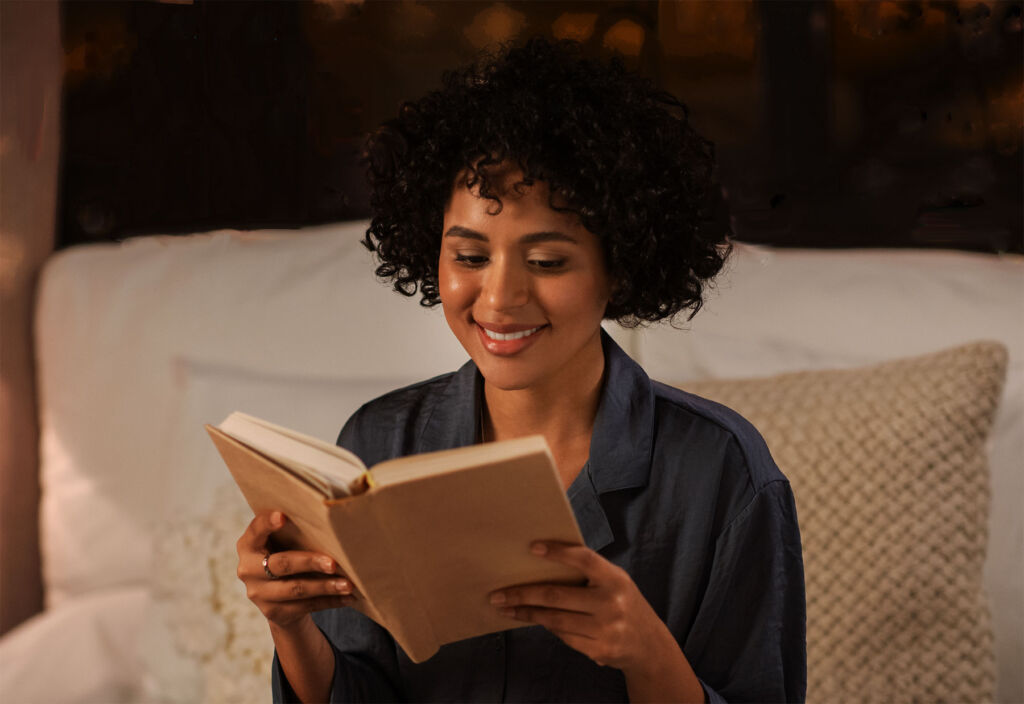 At the end of the test, the power bank still had approximately twenty-five per cent of its charge remaining. If I had fully charged the power bank prior to the test, I estimate it would have probably kept the light on for six hours. Obviously, this would be significantly extended with a higher-capacity power bank (10,000mah+).

Another interesting point with the test is that the M40 produced no noticeable heat whilst on, thanks to its excellent cooling system. Immediately after the conclusion of the three-hour test, I placed the lighting side of the unit against my cheek, and it felt cold.

Not only is the Zhiyun Fiveray M40 a brilliant portable lighting solution for content creators, but it also doubles up as a very capable home lighting solution in times of need. It would also be an invaluable asset for those who enjoy spending time in the great outdoors.

The Zhiyun Fiveray M40 is available to purchase now and has an RRP of £99.00. You can read more information at www.ZHIYUN-tech.com.

[¹] Data for both lighting devices is gathered from internal experiments of ZHIYUN laboratories.
[²] Support the full power output and battery charging at the same time via a PD fast charger above 40W. The Fiveray M40 can work for 29 minutes at 40W on internal batteries. The maximum charging input power of batteries is 15W. 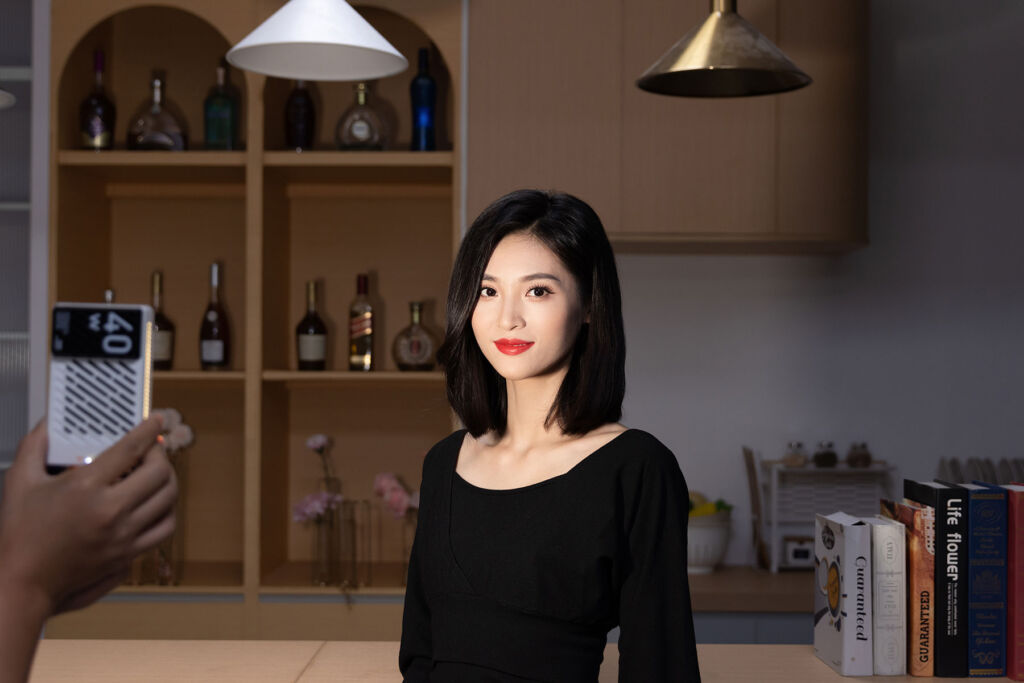