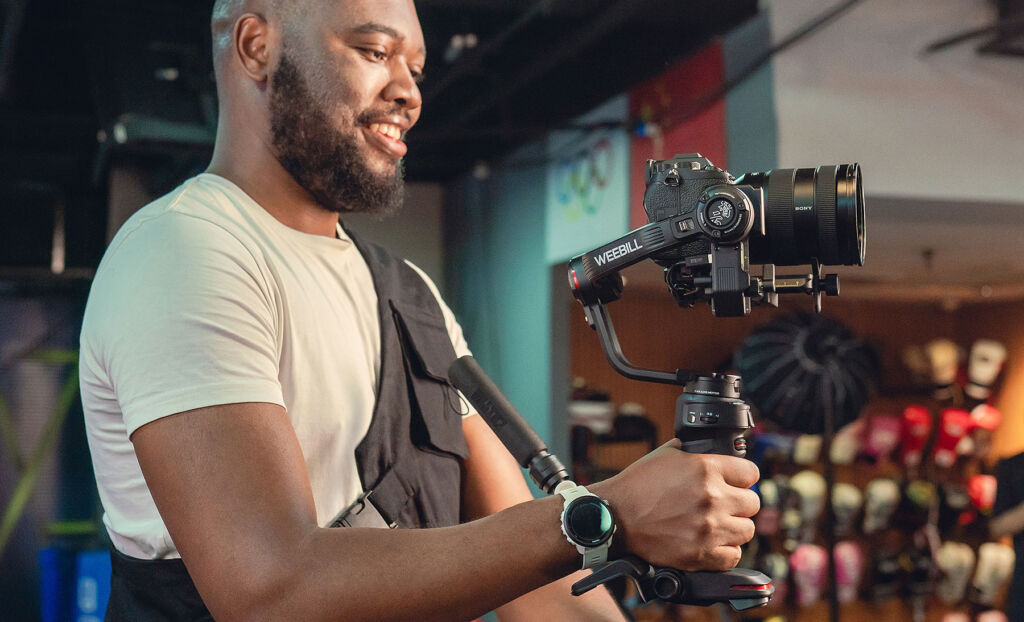 ZHIYUN has launched its all-new WEEBILL 3 Professional DSL Gimbal, and it’s a huge leap forward from previous models. The new WEEBILL has a raft of exciting features and upgrades, including an upgraded sling design, incredible battery life and a built-in cardioid microphone with noise-cancelling functionality.

Whenever ZHIYUN launches a new professional product, leading filmmakers worldwide tend to take notice. Their latest release, the WEEBILL 3, has been designed to simplify artistic creation and adds bucket-list features that vastly expand its usability. 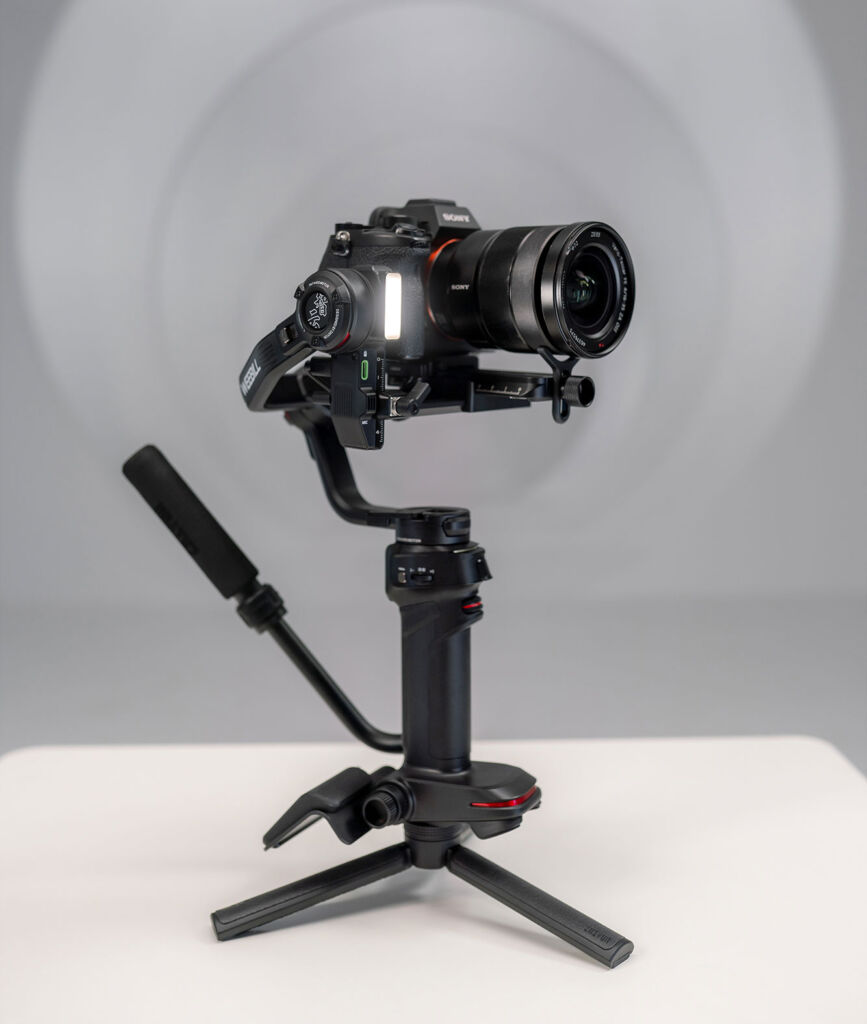 For weeks I have been sworn to absolute secrecy regarding the WEEBILL 3 stabiliser, and for a good reason. Today is the WEEBILL’s official launch date, and it just happens to be the same day news reached me of the newly-unveiled DJI RS 3 Pro stabiliser, a direct competitor. Having taken a look this morning at what the DJI model has to offer, I can see why ZHIYUN were so excited by their latest creation.

That’s not to say that I don’t appreciate DJI’s products. However, in a world where price matters, I am more for value for money coupled with capability, quality and design than someone who prefers to follow a brand name. Not only is the WEEBILL S considerably cheaper, but its superb ergonomics, innovative features, powerful motors and design make choosing the WEEBILL 3 over the DJI model a no-brainer, and the following will clearly explain why.

Before I discuss the exciting new features and upgrades in the Weebill 3, let’s take a brief look at the history of the WEEBILL:

In 2018, the first Weebill was launched and named the Weebill-Lab. The Lab was a revolutionary product that you could hold upright, or when a tripod was mounted and used as a handgrip, you could use it in an underslung position. The Weebill-Lab was similar to a phone stabiliser in weight, but what made it outstanding was that it could handle a payload of up to 3kg.

In 2019, ZHIYUN launched the Weebill-S, which kept a similar small form factor to its predecessor, but this improved model came with a whole host of new features, upgraded motors and a new high-precision algorithm. In addition, users could adjust the speed and parameters of each axis via a dial on the handle, making it an ideal tool for filmmakers who use mirrorless and DSLR cameras.

The next incarnation was the Weebill 2, which came out in 2021. The Weebill 2 kept the classic underslung handle but had a larger 2.88″ flip-out colour touch display screen and large camera support. Other standout features of this gimbal were upgraded motor torque and performance and a focus control wheel.

You’d think that by the time ZHIYUN had created the Weebill 2, that would be as good as it gets? It wasn’t. Towards the end of May, we were allowed to try the excellent Crane-M2 Combo kit, and at the end of the piece, our final comment was we wished for a gimbal with a decent built-in microphone, and as luck would happen, our wish has come true! 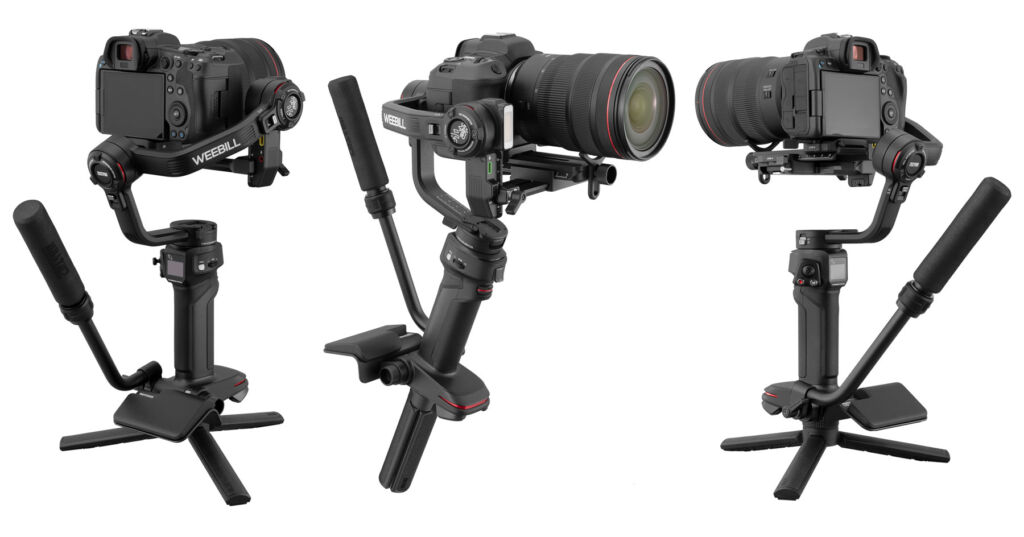 The world’s leading gimbal brand for filmmakers had decided that as good as the Weebill 2 is, it could be even better. ZHIYUN has gone back to the drawing board and created a professional gimbal incorporating its new SLING 2.0 design which takes the ergonomics to a whole new level, along with in-built battery support for all-day use and a fill-light and, in line with our bucket-list wishes a built in cardioid microphone. Let’s take an in-depth look at these new features: 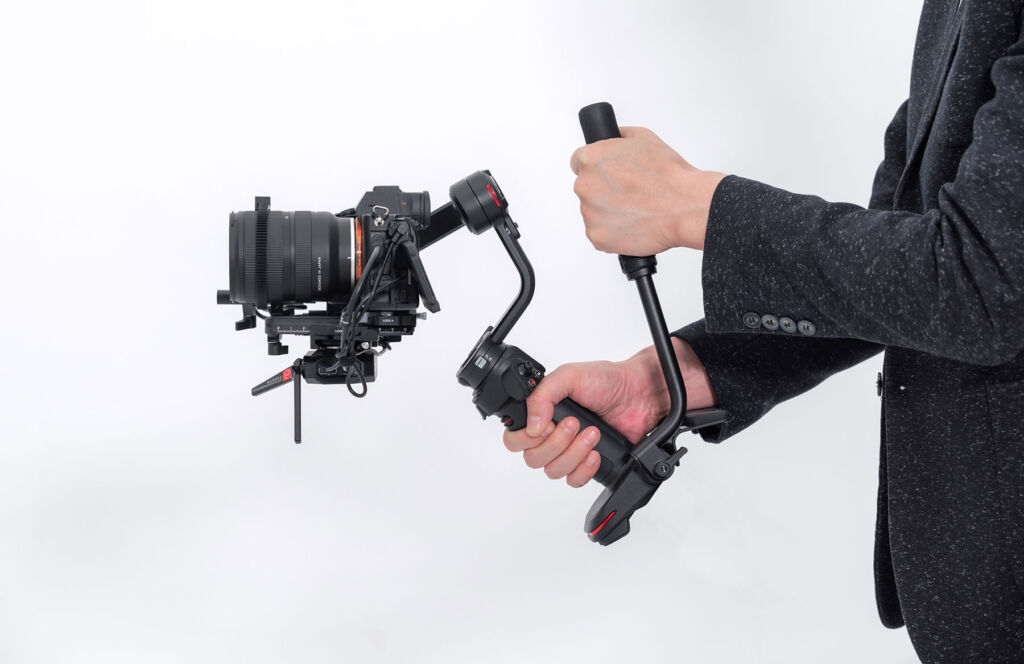 One obvious thing is the thought that has gone into its design. The new SLING 2.0 system is a significant improvement over previous versions. It has a restructured L-shape handle that makes the gimbal extremely stable when self-standing. It also has a new wrist rest and a repositioned, extendable sling grip, which provides over 40% more support to your wrist by shifting the weight onto your arm. The extra support helps in reducing fatigue and allows for extended use in comfort.

The revised sling grip can be moved to the bottom of the gimbal, and by doing this, you’ll get better stability, and it also minimises shaking when shooting at low angles. ZHIYUN has incorporated thumb buttons into the grip to make filming as simple as possible. There is also a mini control stick for movement, and a finger trigger and wheel, which are customisable. Depending on the type of shot you want, you can customise these for follow focus, camera parameters and more. 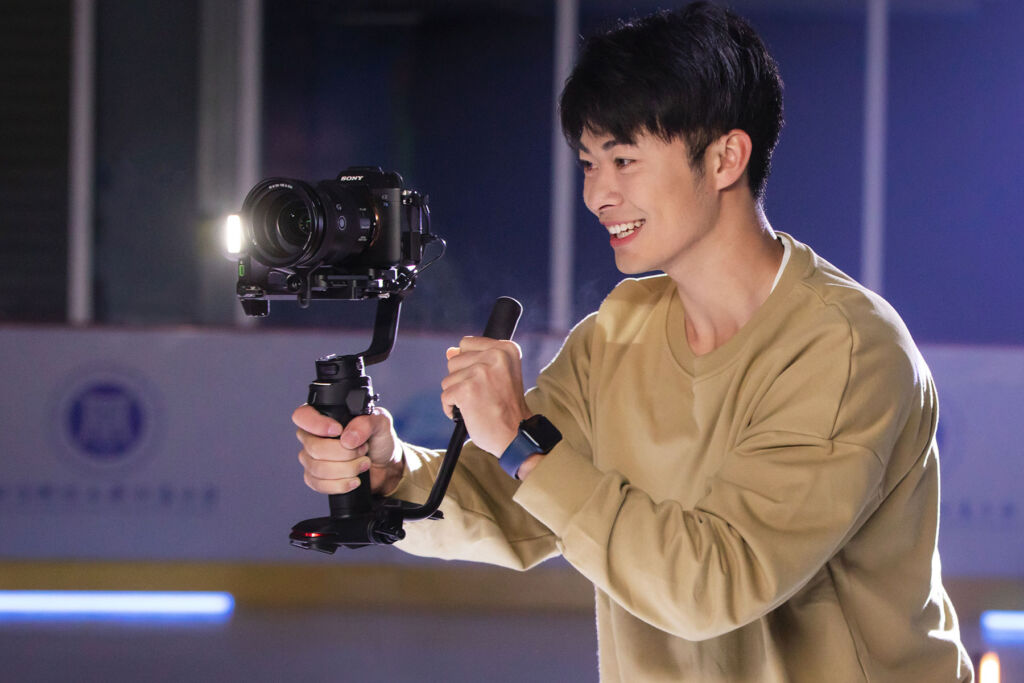 The built-in Cardioid Microphone and light
Anyone who films knows that it is frequently an absolute pain when adding often essential items such as lighting and a microphone, particularly when you want to be mobile. The added weight, plus the wires and all manner of things sticking out of your rig, often in awkward places, can be very restrictive and frustrating. Fortunately, ZHIYUN has done away with this with a built-in HiFi microphone, and a 1000 lumen fill light. 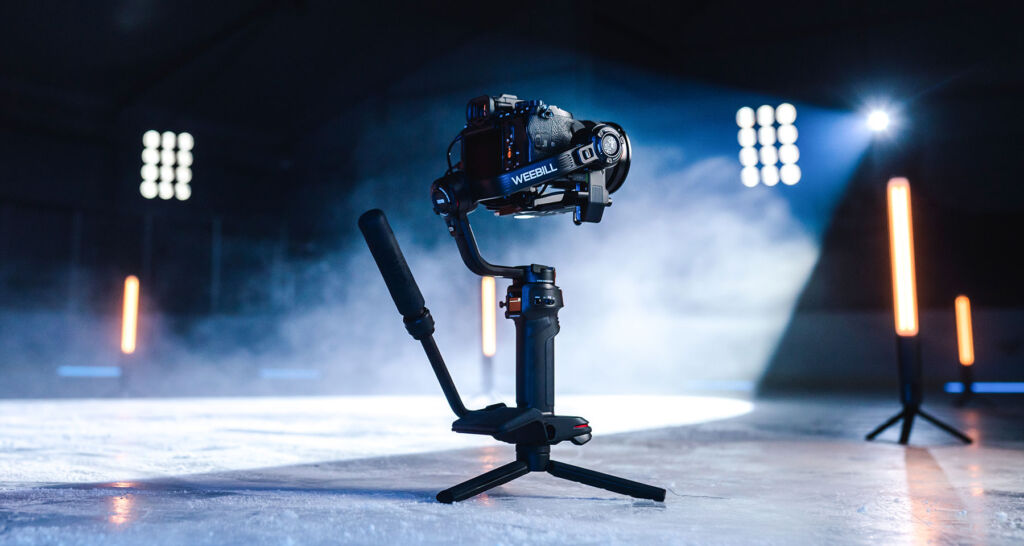 The cardioid microphone is ideal for forward-focused recording, and it comes with the bonus of noise-cancelling functionality. As with other ZHIYUN models, the fill light has colour temperature adjustment allowing you to create the ideal lighting to match the scene. 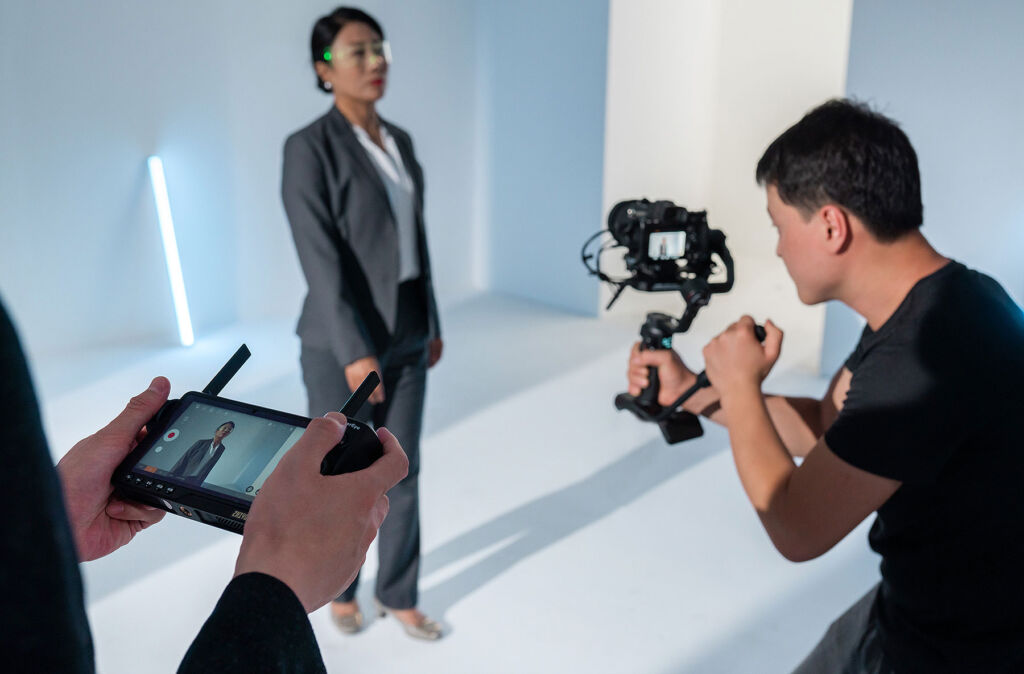 The accessories
Although the WEEBILL 3 offers everything I would need in one unit, there are others who I am sure would like an even more comprehensive range of options, and again, ZHIYUN has this covered. The company has created an ecosystem of Transmount accessories that allows you to expand the gimbal’s functionality dramatically. These include a TransMount Image Transmitted and the MasterEye Visual Controller VC100, enabling you to monitor shots via wireless image transmission. It also allows for parameter adjustments, including zoom and focuses via remote control. In addition, you can also add ZHIYUN’s Follow Focus/Zoom units and its excellent ZY Play App. 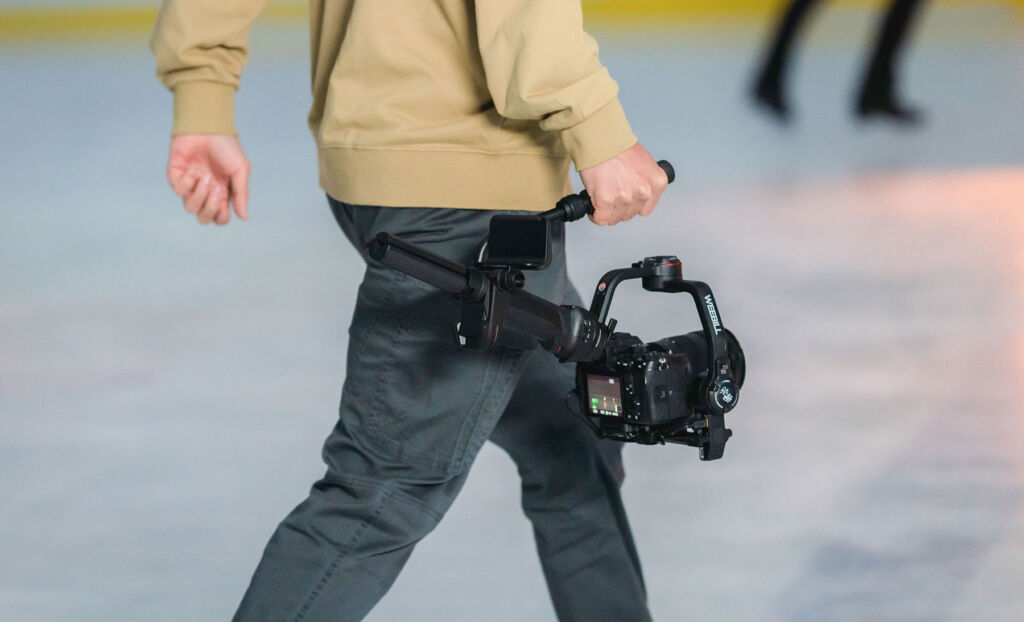 Battery life and charging
Another significant upgrade with the WEEBILL 3 is its battery. The new gimbal incorporates a 7,800mAh battery, allowing up to twenty-one hours of filming. The gimbal also utilises PD fast charging, which means that it can be charged from 0 to 100% in about two hours. It also has a pass-through charging capability for attached cameras (5V/1A); essentially, you’ve got an incredible, long-lasting workhorse that you can keep using with minimal downtime.

Next-gen Quick Release system
The WEEBILL 3 uses ZHIYUN’s latest quick-release system, consisting of a dual quick-release plate with an embedded magnetic wrench. The camera only needs to be balanced once, and following this, it can be repeatedly mounted and secured easily, without needing to rebalance. 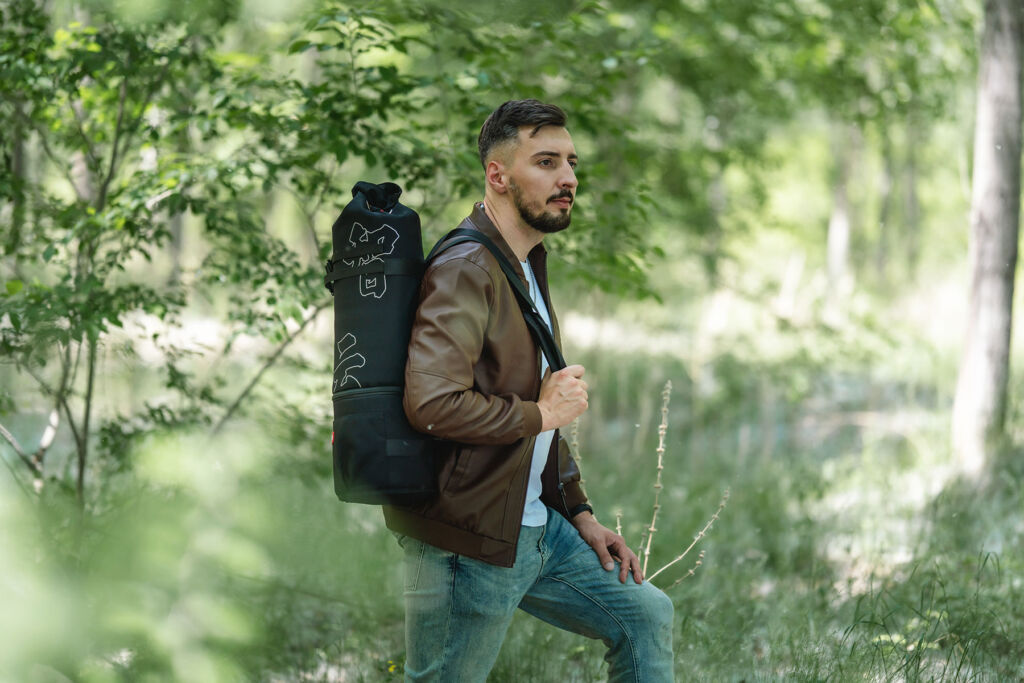 ZHIYUN WEEBILL 3 – Where and how?

The WEEBILL 3 is available from today and is priced at USD$449. We tested the combo kit, which included the addition of a backpack, wrist rest and an extendable sling grip. The price for this is USD$529.

For more information on the full range of ZHIYUN products including the WEEBILL 3, and product videos, and to make a purchase, please visit www.ZHIYUN-tech.com. 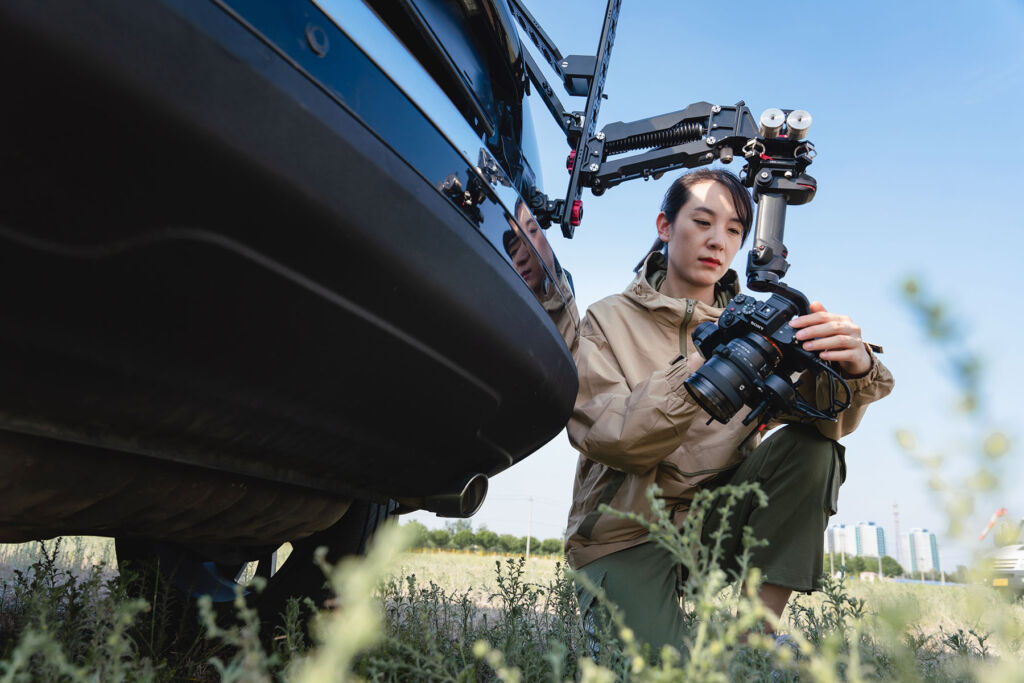