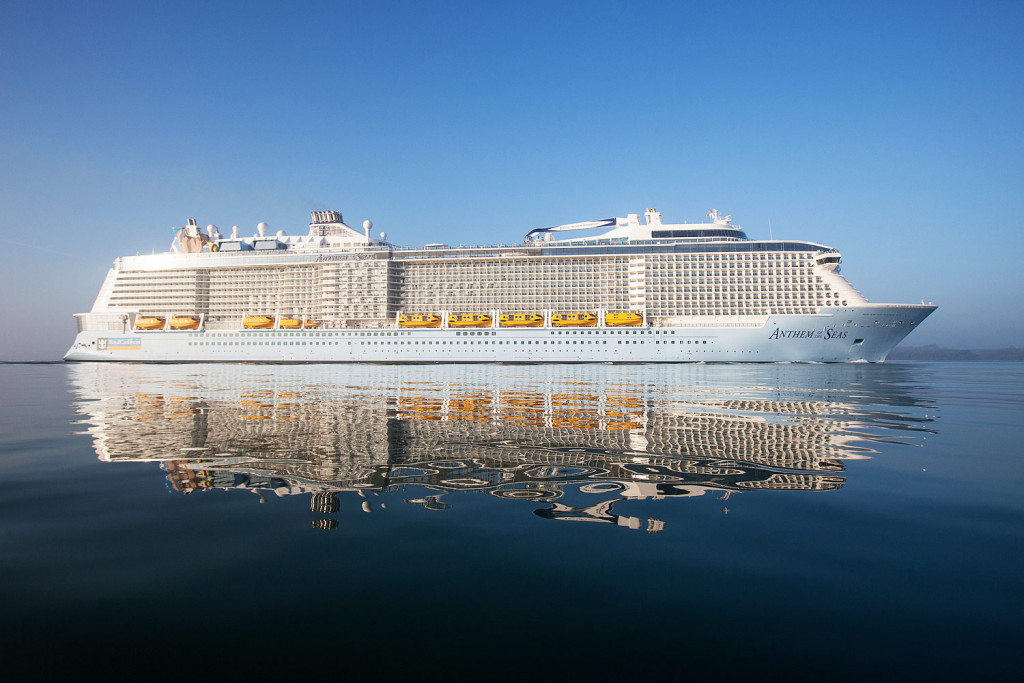 Luxurious Magazine embarks on Royal Caribbean’s Anthem of the Seas for its first sailing with passengers from the historic port of Southampton in England.

For this travel feature, Luxurious Magazine founder Paul Godbold and his wife Natasha chose to represent the magazine. Although they have travelled the world and experienced some of the most spectacular holiday destinations available today, they had never accepted an invitation to embark on a cruise. Their experience on the Anthem of the Seas proved to be an eye-opening experience for them into the world of this much-loved form of travel.

As the introduction stated, Natasha and I had never travelled on a cruise ship, the closest general experience I can think of is my time living in Gibraltar and as an exuberant child running up and down the flight-decks of the U.S.S Nimitz and the HMS Ark Royal. I presumed that given the sheer size of the Anthem of the Seas (just under 1200 feet), the feeling would be similar, I was wrong. 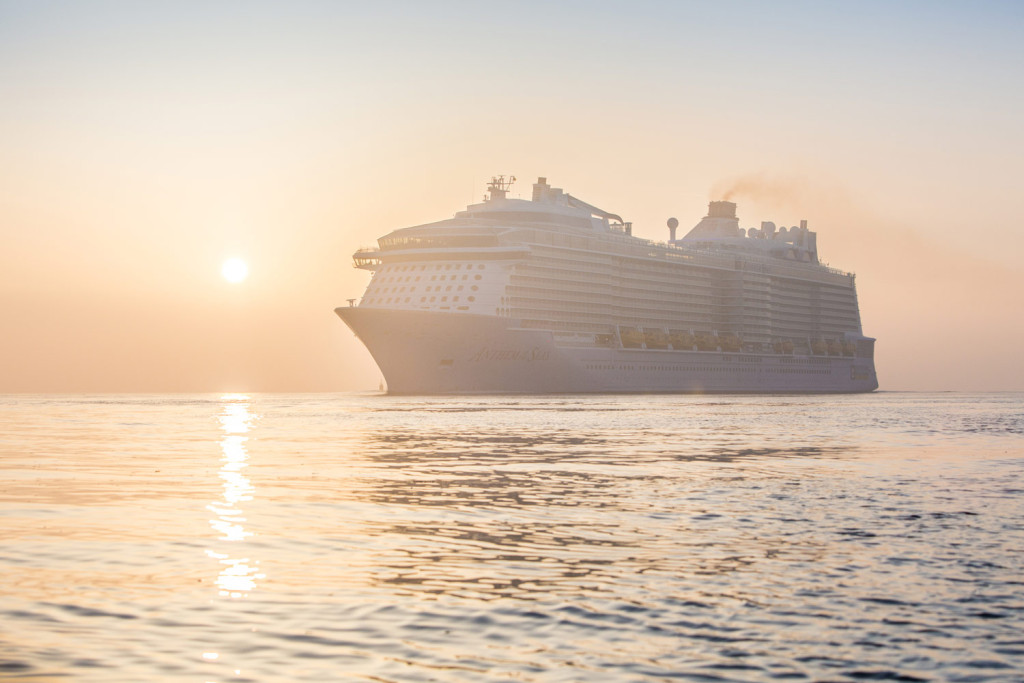 The journey down from our rural home in Lancashire was stress-free as we opted to travel in our customised Jaguar XJ, a car so sublimely refined and perfectly set-up so that we were guaranteed to arrive in the same state that we left. Parking was prearranged, located directly opposite the imposing visage of the Anthem of the Seas. The Royal Caribbean Anthem of the Seas was the undoubted star of the City of Southampton that day and from the front seat of our car was so large that it almost blocked the horizon.

Frequently with “first-time” sailings things sometimes do not to work as correctly as they should do, but this is the whole purpose behind these three-day “shake-down’s”, they are designed to iron out all the bugs before embarking on a much longer sailing.

Upon entering the terminal and proceeding through customs, it was immediately obvious there was something wrong. It transpired that the boarding system had stopped working, this resulting in no-one being able board the ship. 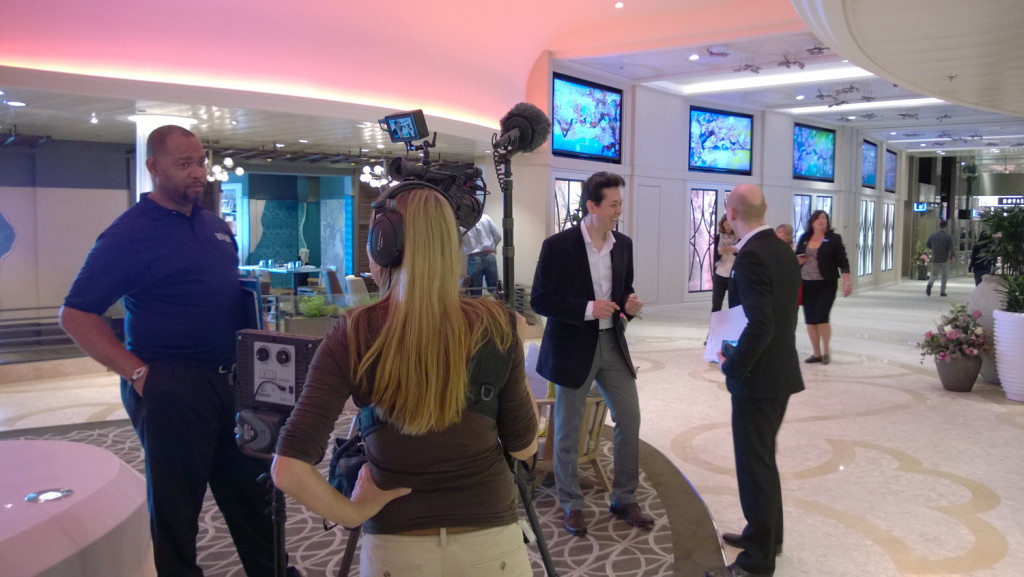 Ordinarily I would be happy to wait, however, I had a film crew waiting for me on-board and only 30 minutes before filming was to commence. Once I had quietly mentioned this to one of the ladies responsible for boarding, a rather smart ship’s officer resplendent in his multiple golden arm-bands came down to personally take Natasha and I onto the Anthem of the Seas. Once we were given our smart wrist bands (used to open our cabin doors and order beverages etc) and photographed for security purposes it was business as usual.

As I hurried to meet our film crew I said a quick hello to Jason Bradbury, host of the Gadget Show and was then slowed down to nothing more than a walking pace as I had to admire the tech-laden walls and huge scale of the ship, it was mesmerising to the point of being overwhelming. I had to stop and stare in utter amazement at the cornucopia of dancing lights and digital imagery that seemed to spring forth from multiple places whilst knowing full well that I still had to drop off our carry-on luggage inside our room. 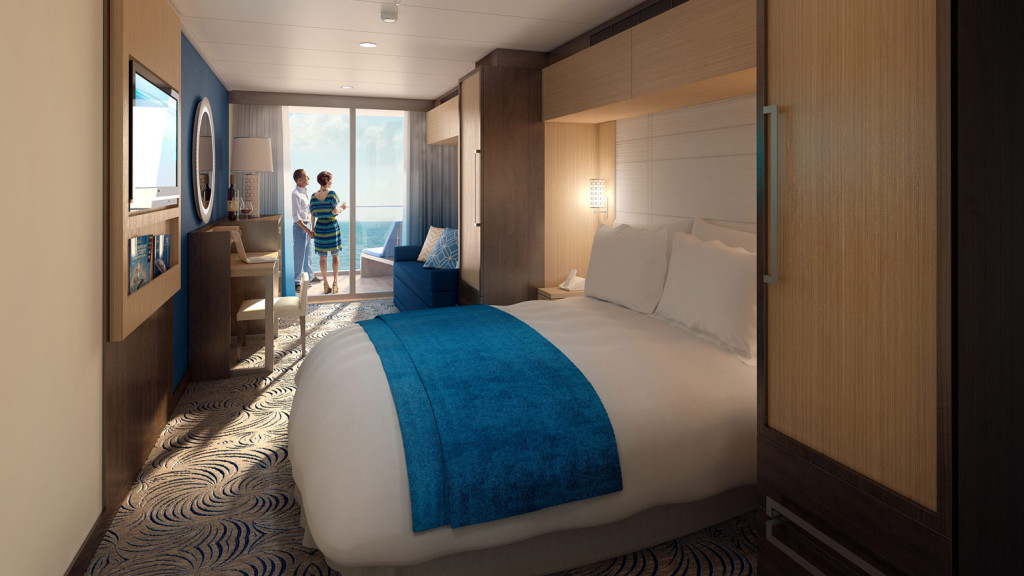 After filming we were able to examine our room in more detail, I’ll admit that although we had an outside stateroom with private balcony, Natasha and I were disappointed by the size of the room afforded to us. It was by no means poorly dressed, being very functional and housing most of the luxuries you would expect but lacked a couple of essential such as bathrobes, slippers and a most importantly for myself, a three-pin plug socket!

The bathroom (best described as bijou) contained a shower, toilet and basin. Being inexperienced “cruisers” this might well be the norm and the compact layout is to ensure that you spend less time in your room and more time enjoying the ship’s entertainment and facilities? 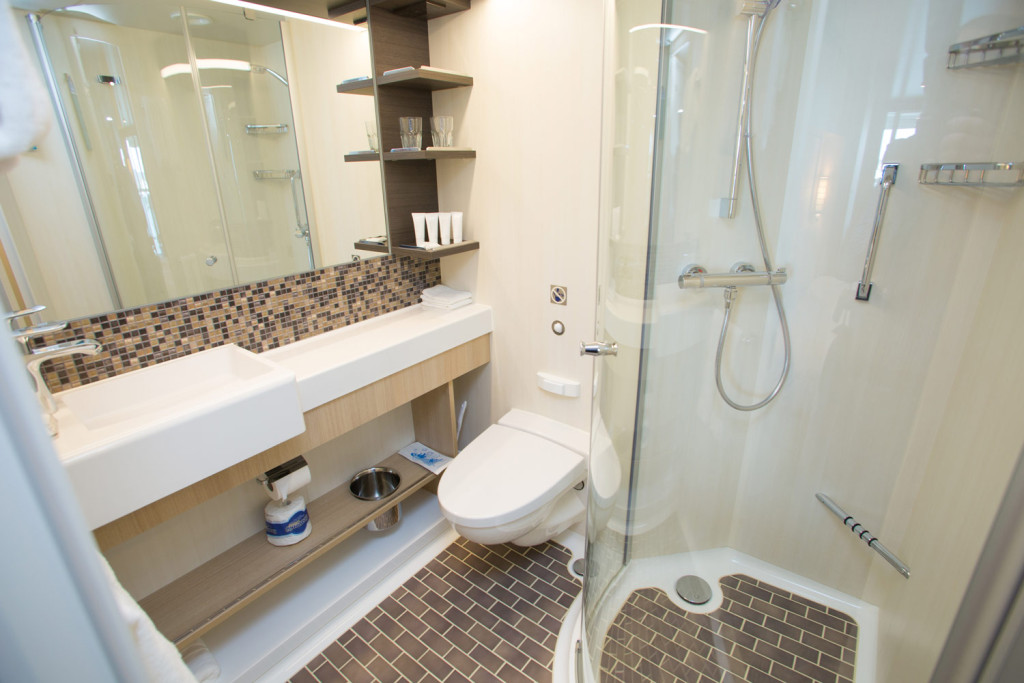 Another thing that we noticed immediately was the loud banging of the cabin doors shutting up and down the long echoing corridors. When you live in the peace and tranquillity of the English countryside and have stayed in some of the most exclusive places in the world, one tends to notice these things.

Personally, I would suggest that Royal Caribbean invest into some ‘soft close’ door technology as anything more than a few days of hearing this, day and night would result in some very disgruntled passengers.

After obtaining a plug adapter, I was able to power up the Macbook and try out the vaunted internet speed. Downloading was very quick, however, the upload speed was disappointing. I wanted to update the many people that enjoy our news on social media with some photographs but due to the time it was taking to upload the images, I had to abort and instead restricted myself to a few Tweets. The slow upload time may just be due to bad timing or perhaps a glitch? I did try on three occasions and the result was the same. 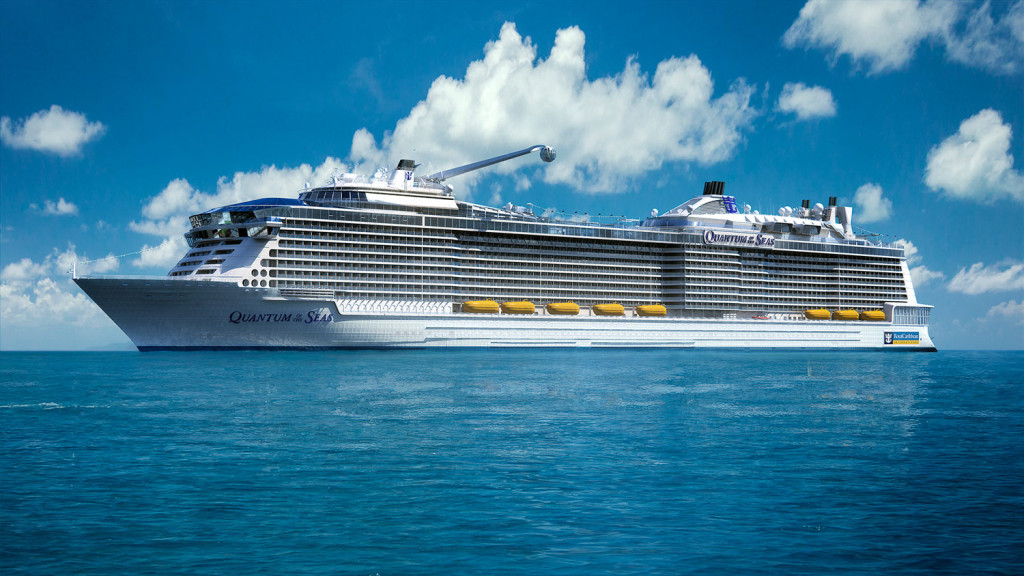 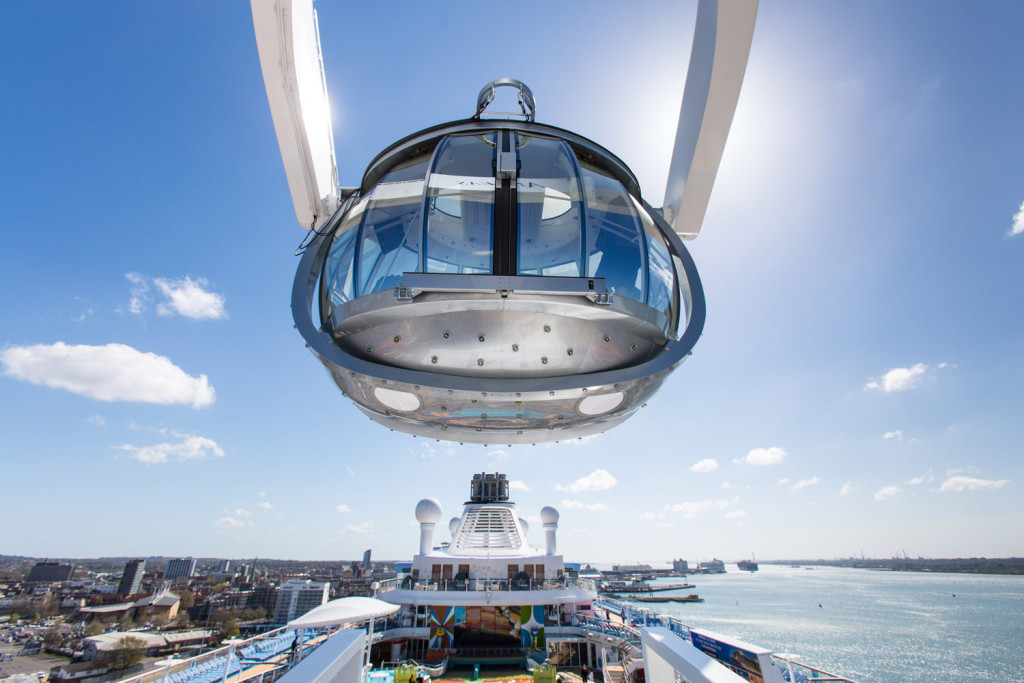 Anthem of the Seas – What “wowed us” and our Summary

After a thorough refresh, it was time to explore the ship and this is where any grumbles about room-sizes subsided somewhat. Aside from the top deck of the ship, the primary area where most will focus their time is around level five. Here and the adjacent decks can be found the majority of the places to dine, shops and lounges.

Possibly the star attraction of this level is not one of the incredible restaurants but the robot bartenders at the Bionic Bar. This bar provides a small insight into the amazing technology installed on the Anthem of the Seas. 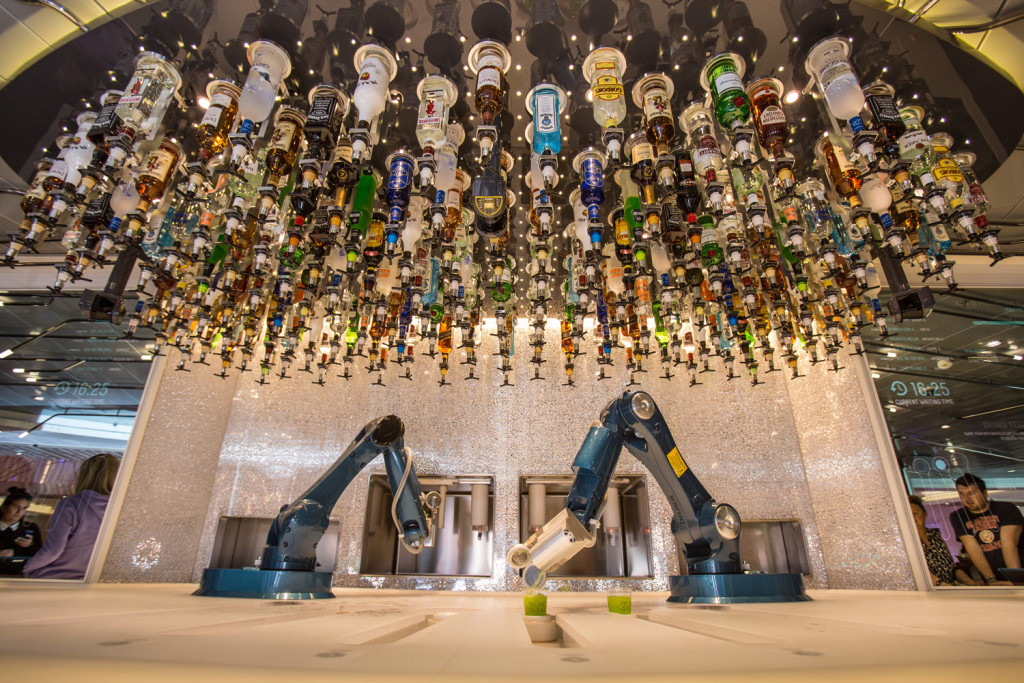 To order a drink off the menu, just make your selection on the tablet computers, stand back and marvel at the way these robotic arms mix, shake and construct your chosen beverage to music, it really is a unique thing to watch. Once your drink has been prepared you simply walk up to the bar and place the smart band on the sensor to receive your order.

If you’re feeling bold and decide to invent and name your own cocktail, be prepared for feedback, people can either praise or admonish your efforts via the rating app. Whilst on the subject of technological treats, another of the must-see attractions is TWO70, a 270 degree 12k one-of-a-kind cinematic experience where robotic screens create stunning visual imagery in the amphitheatre-like space.

For even more “wow factor”, it would be remiss of us not to mention some of the wonderful places to eat, in no particular order we have a brief selection of recommendations: Wonderland, with more than a nod towards the Lewis Carroll book, Alice’s Adventures in Wonderland. This is as much theatre as it is a dining experience. 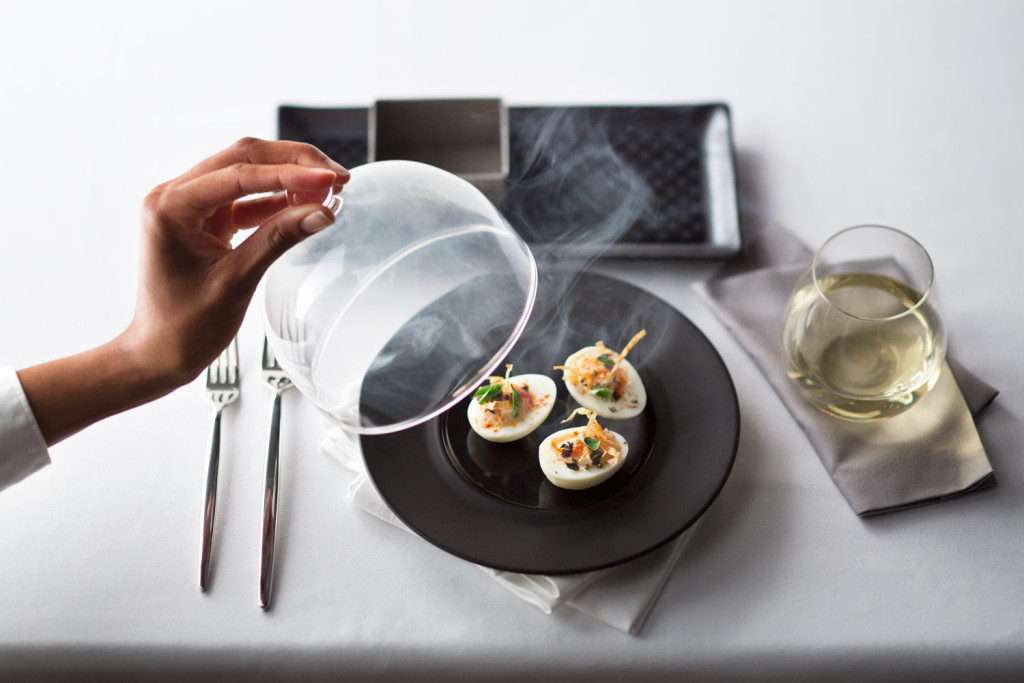 Here the inventiveness and quality of the food must be commended and the ebullient staff go to great lengths to enhance the whole dining experience, but a word of warning, you do need to be in the right mood to appreciate the full theatrical impact. Jaime’s Italian by Jamie Oliver and staffed by his renowned team of young chefs is another of the must-try places and if you’re looking for fine-dining then our preferred places are Chic and Silk.

Probably our favourite place to eat within this general area was Izumi offering a fine array of Japanese cuisine, most of which passed the stringent Godbold healthy eating test. During our voyage, we had the pleasure of meeting Izumi’s principal Travis Kamiyama who provided a first-hand demonstration into the exacting art of sushi-making. Given his extremely high standards, I was left in no doubt that the food at Izumi would be of excellent quality.

For both Natasha and myself, looking good and feeling good is very important and although copious amounts of delicious food may be a welcome treat to some, we prefer to enjoy food that doesn’t come with a small burden of guilt and afterthoughts of hitting the gym, this is where Devin Alexander “steps up to the plate”.

Devin is a renowned celebrity chef and author (along with being an extremely nice person) specialising in creating low-calorie versions of some of the world’s most popular food. Here you’ll find delights such as her take on the world’s most famous burger, Bacon, Egg and Spinach Wraps, Chocolate Chip Pancakes, Chorizo Lasagna, Buffalo Grilled Chicken Salads, Greek Nachos, Pulled Pork Tacos, Chinese Pepper Steaks, Awesome Meatballs all at mindbogglingly low calorific levels. This is for us the perfect place to eat, chat and be merry. With Travis’s Sushi offering and Devin’s treats, Natasha and I could enjoy ourselves and walk off the Anthem of the Seas rather than being hoisted off at the end of the sailing. 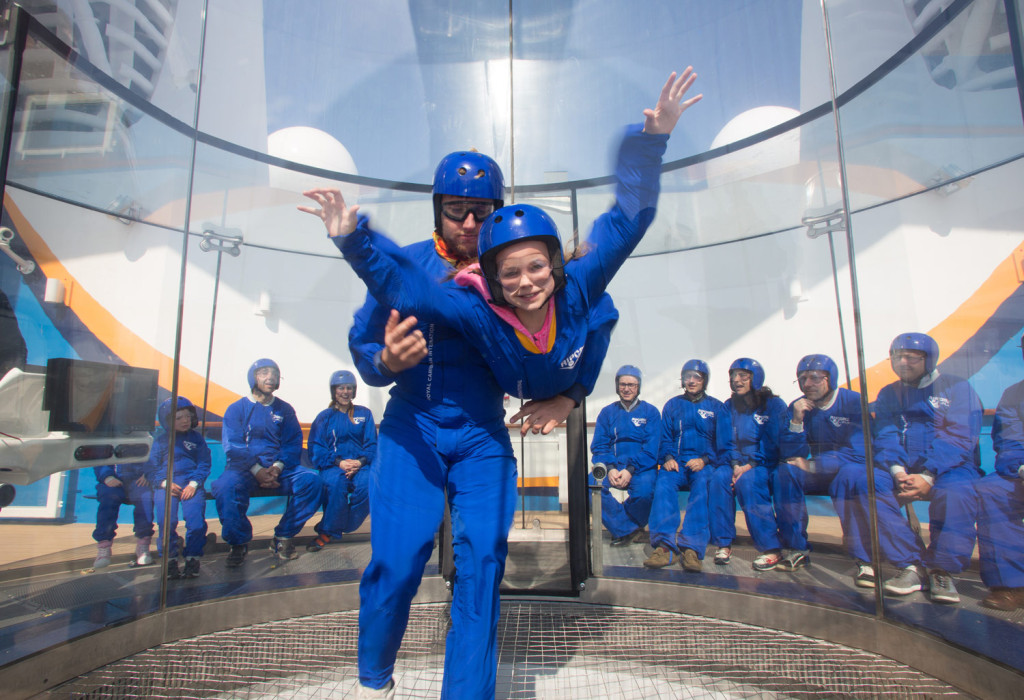 When it comes to general attractions, once again the Anthem of the Seas does not disappoint with bumper cars, theatrical showcases and musical shows, multiple pools, an extremely well equipped gymnasium, skydiving simulator and the much publicised North Star, a viewing pod which allows you to have an incredible view from 300 feet above the sea.

Although Natasha and I were booked to experience the North Star, once more those pesky gremlins popped up and meant that our views were restricted to the top deck of the ship. All of the swimming pools looked inviting, some of which are indoors while other outdoors, and on this occasion joining the multitude of pasty white fleshy bodies splashing about in the water didn’t endear us enough to try them for ourselves.

With all the glitz, glamour and technological wizardry, we were a little confused as to what demographic the Anthem of the Seas was aimed at. This question was answered by the owners of Royal Caribbean at the official press conference, in simple terms it was aimed at everyone. The Anthem of the Seas was designed for all generations of a family to go on vacation together. The incredible technology is not designed to alienate anyone, more to enhance one’s experience and I can understand and agree with this.

Anthem of the Seas Summary
The Royal Caribbean Anthem of the Seas is pretty much all it claims to be, a technological and luxury marvel on the sea. Teething problems and glitches aside, it “beggars the question” did we enjoy our time and would we go on another cruise? 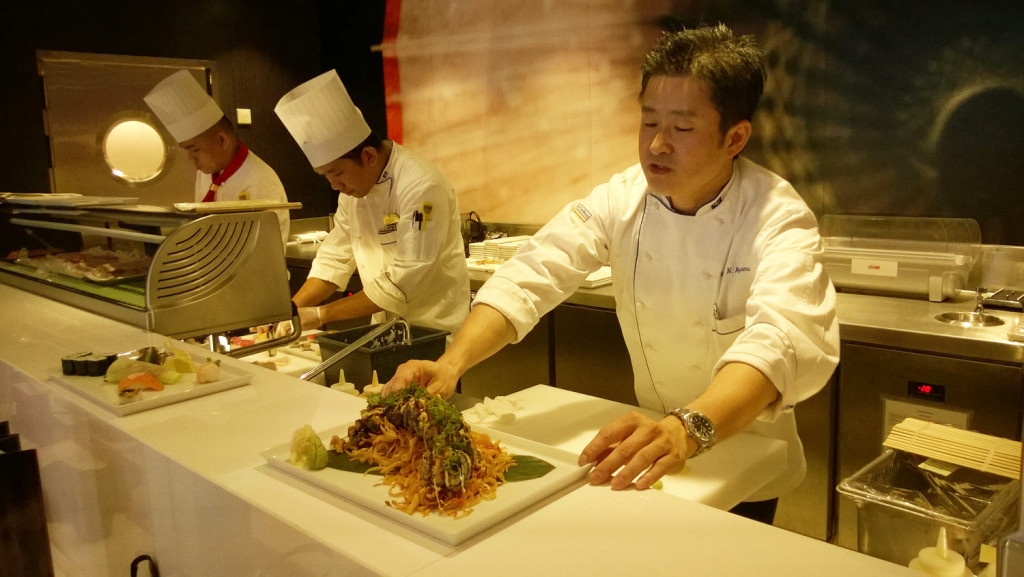 The food is first rate, the technology is astounding and the variety of things to do would keep even the most demanding of passengers satiated. From our personal point of view we probably wouldn’t go on another cruise, not because there wasn’t enough to do, not because we weren’t “wowed” – we were, but the thought of being in an enclosed space with anything up to 5000 people, the majority of which we wouldn’t know does not appeal to us.

We like our privacy, we like peace and quiet and this is one of the few things that a cruise would struggle to offer us. We know that on vacations like this there would be stop-off points and a chance to find some privacy, but it’s those times in-between. There were highlights such as meeting Devin Alexander and sampling her food, learning about Sushi with Travis Kamiyama and the company of our wonderful hosts, but I believe cruise-ships require a certain mentality, ingrained within the majority of people, but not unfortunately within Natasha and myself.