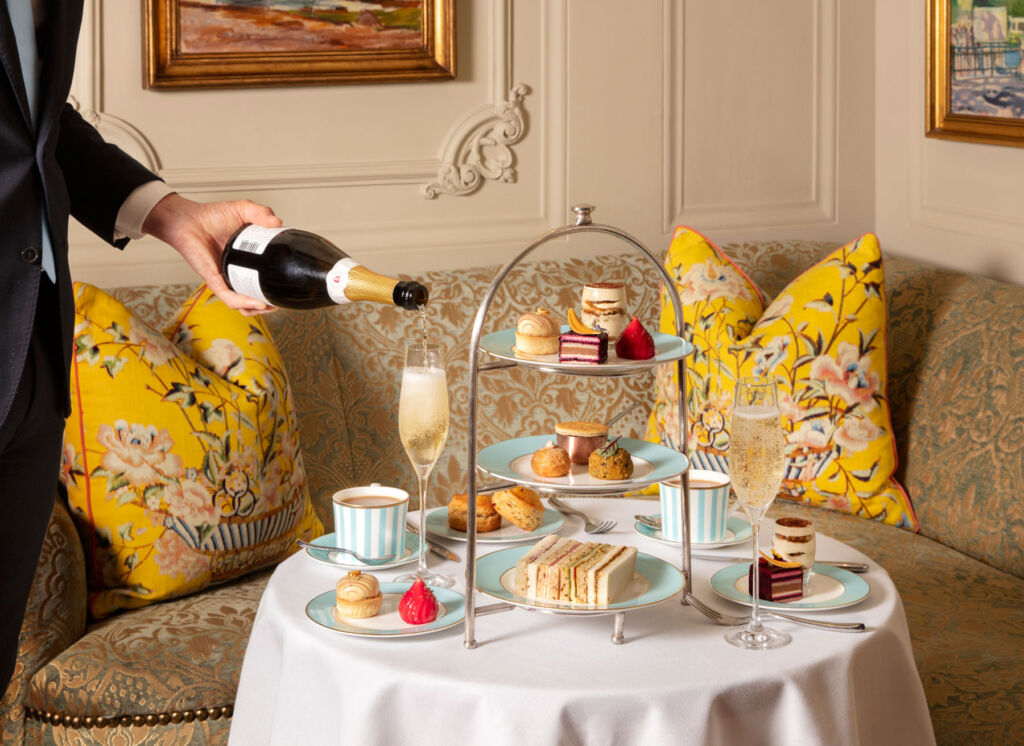 Simon Wittenberg visits the five-star property in the heart of London’s South Kensington to sample an exquisite “80 Days Around the World” afternoon tea inspired by the 1873 Jules Verne novel, Around the World in Eighty Days.

The “80 Days Around the World” afternoon tea was launched by The Kensington hotel in London towards the end of September and marks the debut of a new series of adventurous seasonal teas at the luxury property belonging to the Doyle Collection.

Priced from £58 per person, the latest concept has been designed to take visitors on a gastronomic journey across Europe and the Middle East, taking in the sights of London, Paris, Rome and Cairo. With the palate treated to intricate culinary creations, dietary preferences, such as vegetarian and vegan, can be accommodated on the day, as long as there’s some advance notice. 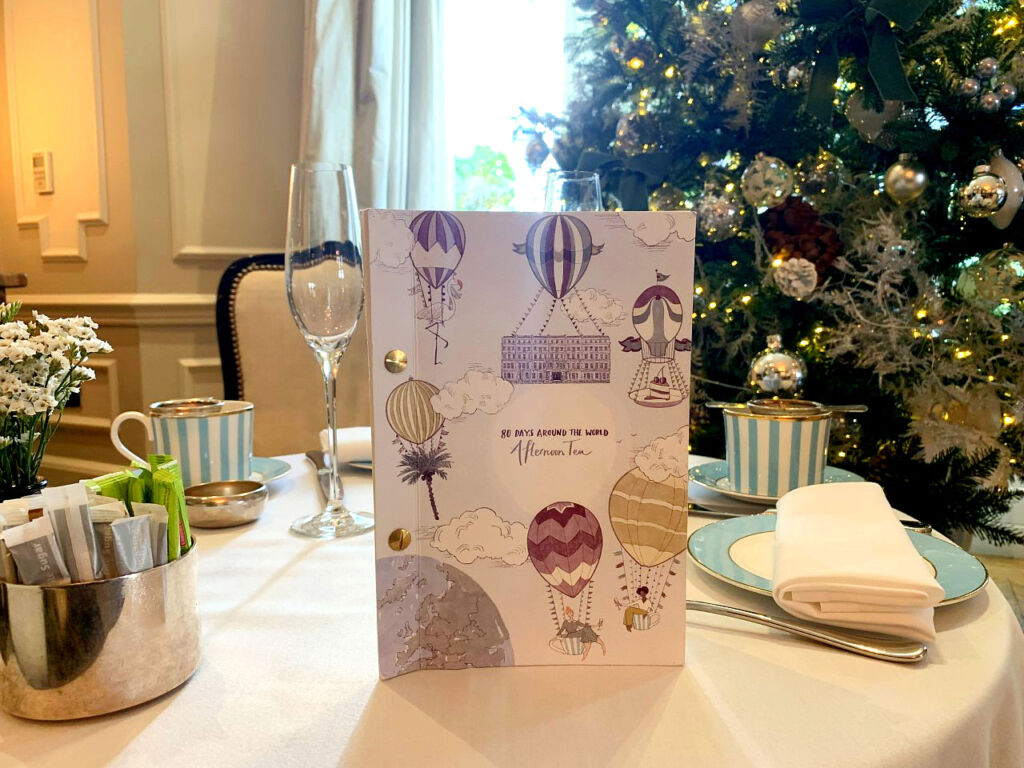 Located on the left-hand side of the lobby area, the tea is hosted in The Kensington’s cosy Drawing Room, which features comfortable soft fabric seating, plush cushions, and a sprinkling of tables. Menus placed over the light blue and white bone china plates are beautifully illustrated with intricate hot air balloon-type drawings, in keeping with the theme of the tea. 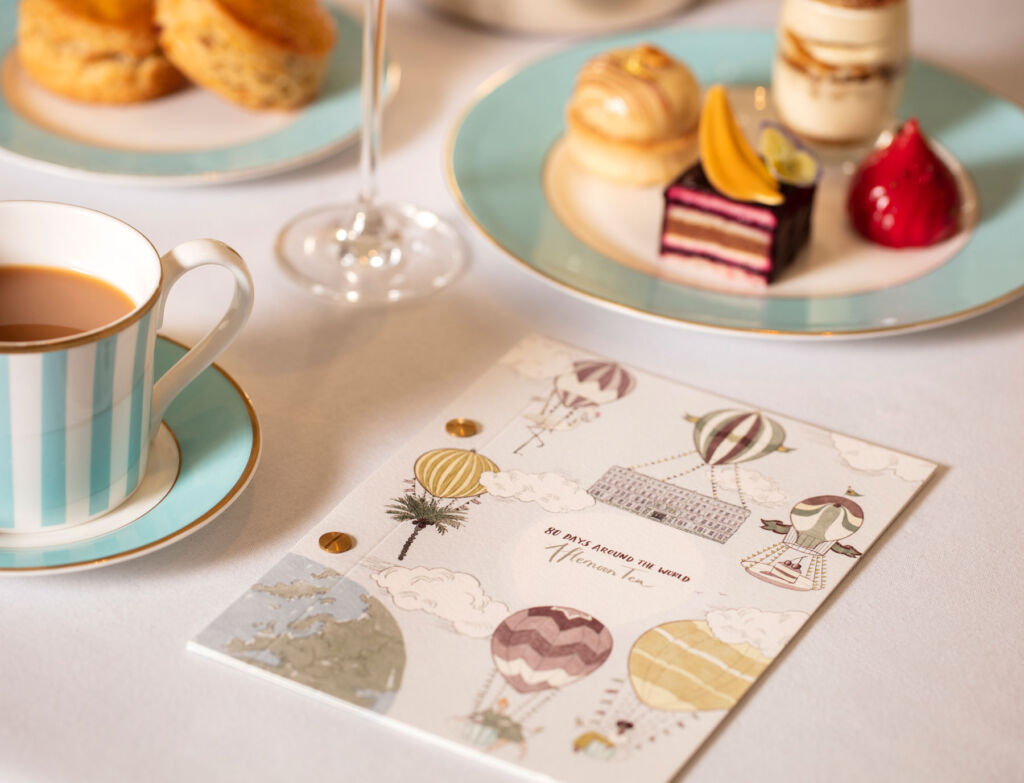 Opening up the nicely-bound à la carte reveals a short overview of what’s on offer to guests and a recap of the story behind the famous novel.

The legendary tale is centred around Phileas Fogg, a perfectionist from London, and his newly-employed French butler, Jean Passepartout, who attempt to circumnavigate the world in 80 days on a £20,000 wager (the equivalent of around £1.6 million in today’s money), set by his friends at the Reform Club on Pall Mall. The adventure starts in London on 1st October 1872, explaining the timing for when the commemorative tea was unveiled. 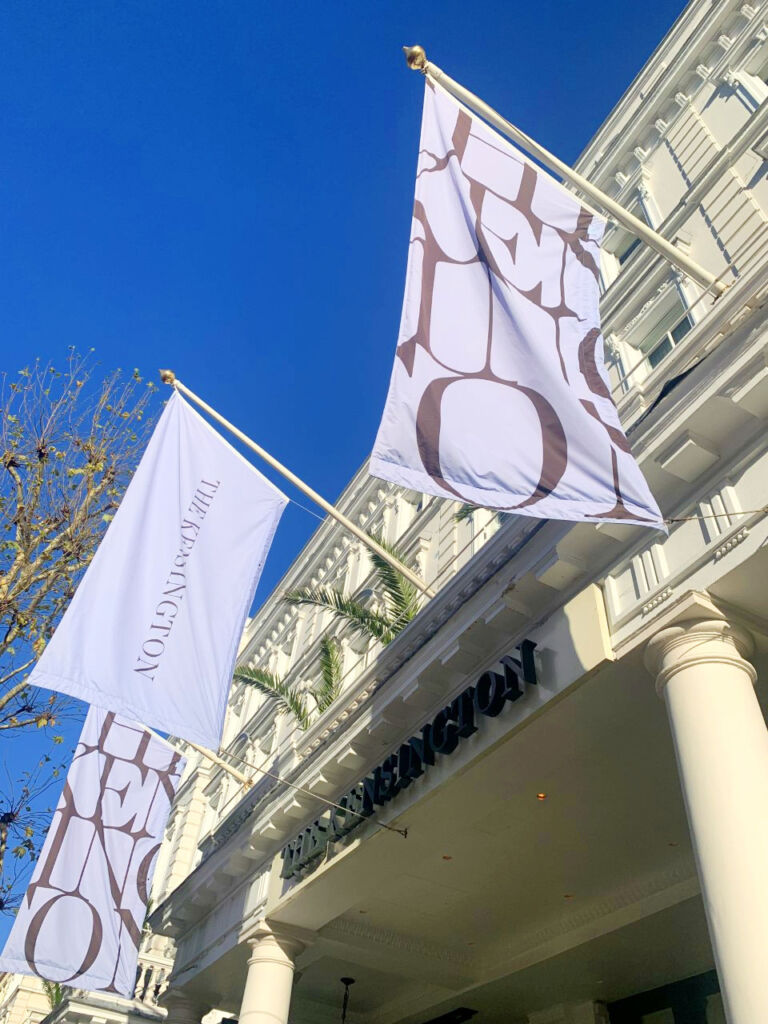 We visited this establishment on a bright and sunny autumnal Friday afternoon at 1 pm and sat at a small round table nestled between the sparkling Christmas tree and the open fireplace. Not being a “traditional” day or time for tea, it was relatively quiet, with most other guests opting for light refreshments or lunch.

However, those who choose to indulge in the “80 Days Around the World” afternoon tea will be treated to an enticing selection of sweet and savoury delicacies on three tiers, which can be joined by different hot beverages.

Alternatively, there is the option to accompany the tea with a glass of Perrier-Jouët Grand Brut bubbly, which costs an extra £18 per head (the menu also lists other champagnes by the glass or bottle) or a non-alcoholic sparkling Rosé, which we also had the opportunity to sample. There are equally some themed cocktails available, hailing from different parts of the world.

With dietary requirements catered for, my other half had the vegan “80 Days Around the World” delicacies, whereas I had opted for the pescetarian and dairy versions, thereby giving us the opportunity to explore the merits of both. After a short introduction by our welcoming host, we started on the bottom level of the cake stand and worked our way upwards.

First up were the sandwiches, with London represented by a double helping of smoked salmon and cream cheese fillings, which sat in between some soft granary bread. This was followed by pesto, mozzarella and sundried tomato for Rome, prior to moving on to the sweeter cumin hummus with caramelised onion to represent the Egyptian city of Cairo.

The vegan line-up takes in the aforementioned cumin hummus on white bread, followed by sundried tomato and vegan pesto, a courgette sandwich, and, finally, marinated cucumber with vegan cheese. 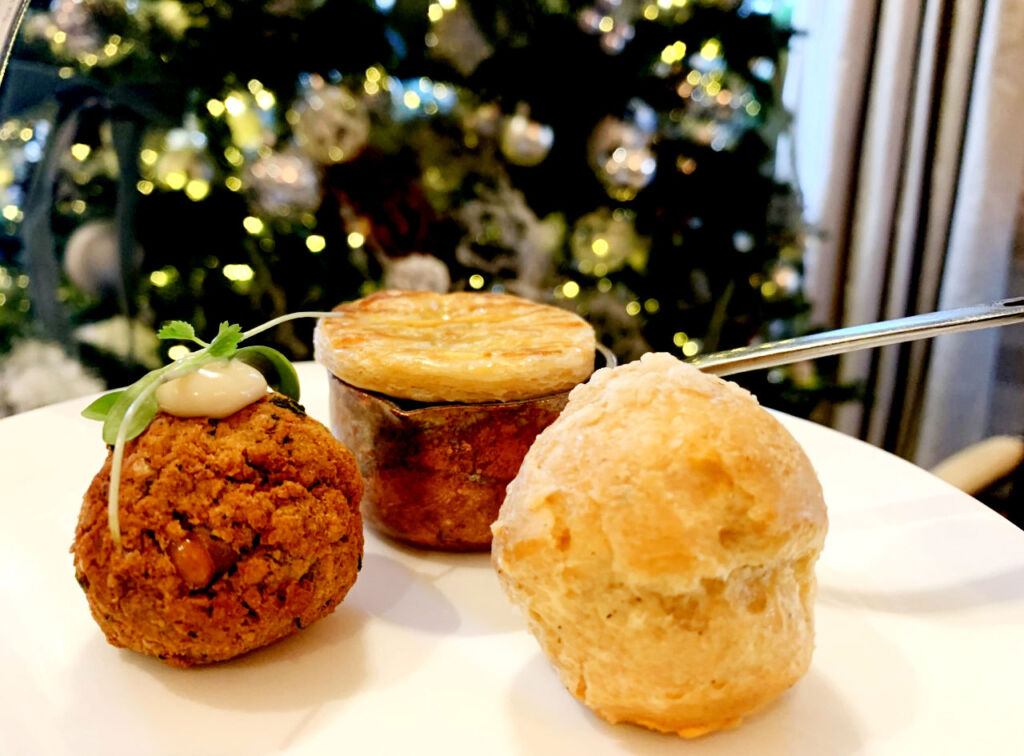 On to the very top tier, to continue the savoury theme, it was the mushroom pie (London) served in a little copper pan with a puff pastry topping (this is substituted with a toasted crisp for the vegan tea), which caught my eye first of all. Oozing with flavour and with a sumptuously soft texture, it was delicious, as was the falafel with aioli on top (the vegan tea has two falafel), and the Parmesan Gougère (a choux pastry ball filled with a rich and tangy tomato cream centre). 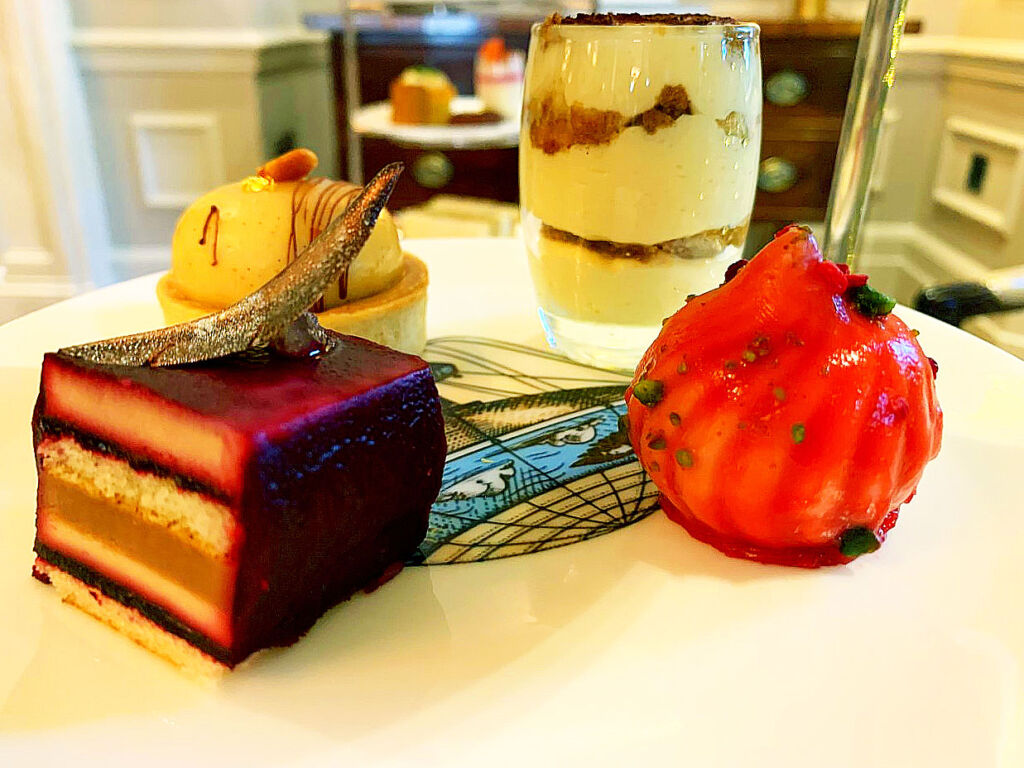 With the savoury bites enjoyed over a leisurely conversation, the sweets beckoned on the middle tier. The inviting tiramisu in a glass was a clear favourite – rich and creamy and the perfect tribute to the historic Italian city of Rome.

Not being a big fan of Banoffee Pie with a salted caramel banana mousse (for London), although it looked hugely inviting, I reached instead for the Parisian Opera Mont Blanc cube, made from blackcurrant jelly, a vanilla sponge, chestnut cream and white chocolate, garnished with a dark chocolate leaf. This was followed by the Cairo-inspired raspberry, rose and pistachio twirl, which had a beautifully light and airy mousse-like centre. 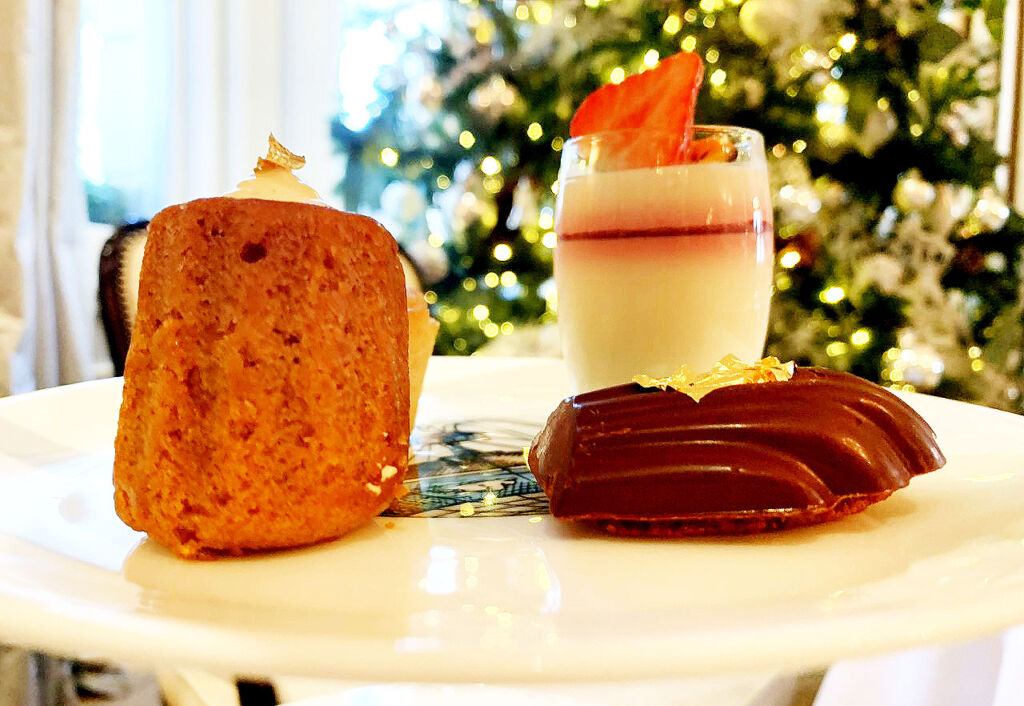 The vegan selection was just as impressive and was comprised of a carrot cake to represent the UK capital, a Madeleine cake coated in vegan chocolate, a lemon Amalfi cake for Rome, and a rose and raspberry compote to finish.

With clean plates and three empty tiers on each of our cake stands, and with a little pocket of room remaining in our stomachs, deliciously warm scones arrived wrapped in a white napkin to greet us as we “arrived” back to our starting point – London. 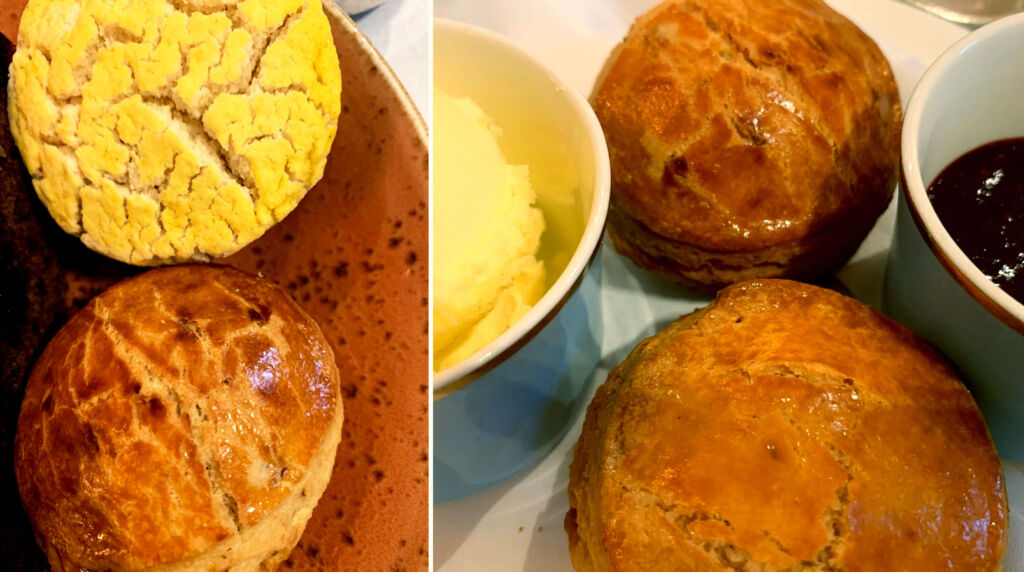 Sporting a relatively thick glazed crust, the vegan version had a more yellow appearance but was just as tasty when accompanied with some dairy-free margarine (instead of clotted cream) and a generous helping of strawberry jam.

What’s our verdict?
With our tea nicely paced across a two-hour stay, the “80 Days Around the World” afternoon tea is a clever take on a well-known novel. With such a diverse array of taste and flavours, combined with excellent hospitality, attentive staff, and luxurious surroundings, these crucial ingredients certainly made for a memorable visit.

It will be interesting to see where The Kensington’s afternoon tea ventures next, as our host wouldn’t give much away as to what was in the offing for 2023. However, this afternoon tea concept provides plenty of flexibility to explore other global destinations apart from the aforementioned cities, which means that, for this establishment, the world is their oyster… 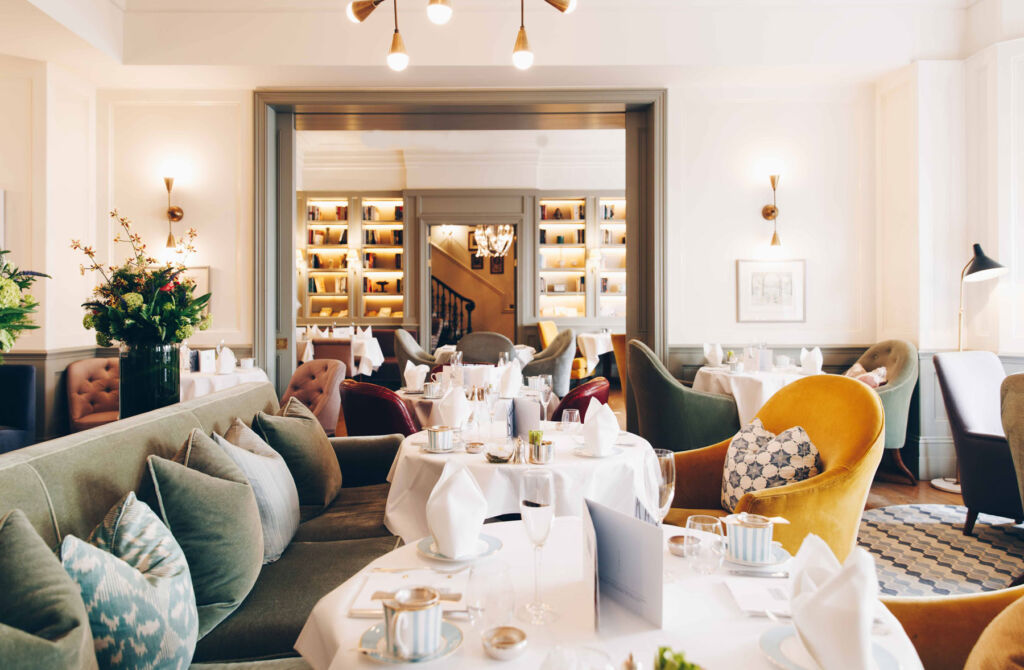 The Kensington is located at 109-113 Queen’s Gate, South Kensington, London SW7 5LP, United Kingdom. For more information on 80 Days Around the World Afternoon Tea or to make a reservation, visit www.doylecollection.com.

See pictures from our visit to The Kensington on the Luxurious Magazine Instagram page. 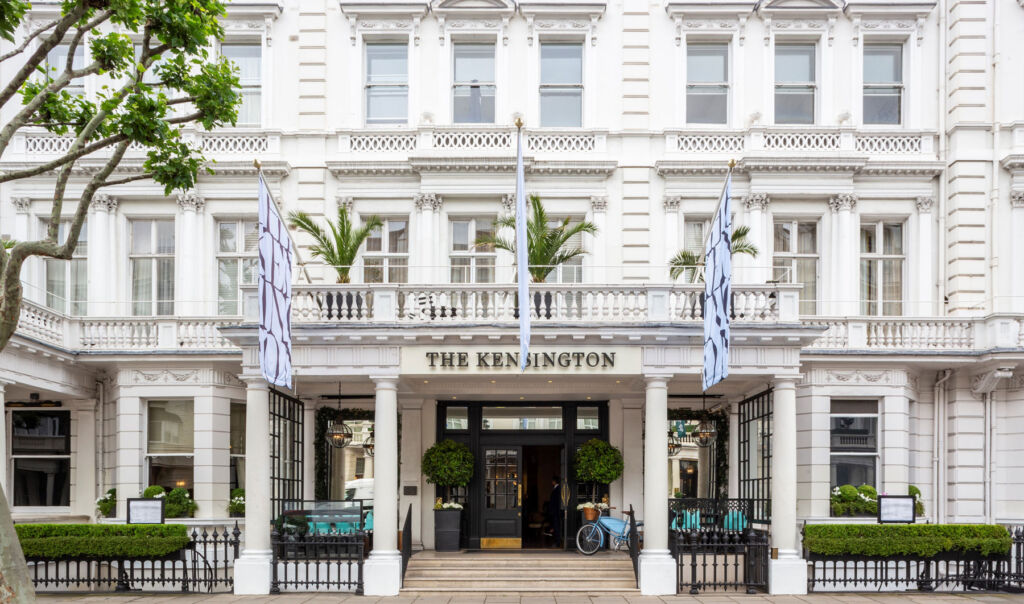