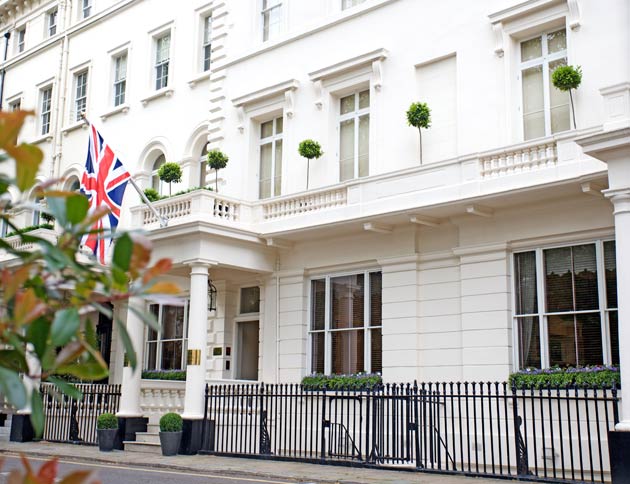 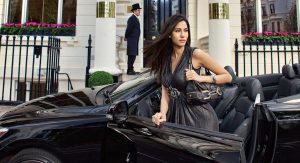 When you drive up to most fancy hotels, you know you have arrived because of their sweeping driveways behind a cast iron gate or their grand entrances complete with staff in top hats and tailcoats waiting to greet you. But no, not the The Royal Park Hotel. This unassuming building, comprising of three restored mid 19th century grade II listed townhouses, is rather discreet. It’s as if it knows its charm but would rather let you discover it upon stepping inside. And indeed you’re not disappointed.

With its 48 rooms and suites over five floors and two drawing rooms (green and blue) used for dining, private gatherings and meetings, each one is meticulously decorated with period furniture and original oil paintings to give you a sensation of having travelled back in time. And rather than feel you’ve stepped inside a hotel, it’s more as if you’ve stepped into someone’s home. In fact, the staff’s mannerisms will make you feel as if you were indeed at home.

The Royal Park Hotel’s Blue room is great to relax in to have a pre or post dinner drink. It’s equipped with an honesty bar, large comfortable sofas, armchairs to make you feel grand and an open fire which I can only imagine would give the room a cosy feel when lit. 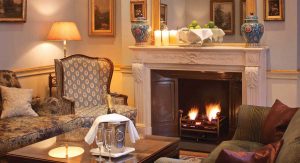 The Green room is approached through the Blue room where guests can have private dinner and breakfast. But it’s the Royal Park Hotel’s offering of ‘afternoon tea’ that lures most of the visitors to this room and I wanted to see the reasons why for myself.

The small and intimate Green room at the Royal Park Hotel is adorned with impressive mahogany tables with period chairs and features large windows – the place I decided to sample my afternoon tea. Depending on when you dine, The Royal Park Hotel offers tea to reflect the time of year from Easter to Christmas or the Chelsea Flower Show to Wimbledon. Having arrived just after the summer, I was offered the traditional tea of finger sandwiches, and a number of homemade cakes including lemon posset, carrot cake, chocolate muffins and of course the compulsory original and fruit scones. The portions were huge even for someone like me with an equally huge appetite. I actually had to take the rest home with me – just as well, the cakes were incredibly tasty! 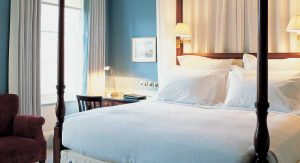 So with a full belly, I took myself upstairs to relax in one of the suites I was booked into complete with a magnificent four poster bed with handmade English brass lamps either side of it to give the room a total opulent feel. Each of the rooms and suites are decorated in Regency colours of blues, creams and reds and are adorned with original paintings and fine limited edition prints. As well as a separate sitting room the suite had the most beautiful intimate balcony overlooking St James’ Church to the left where Oscar Wilde married. I was so pleased I was able to have breakfast out there in the morning for no extra cost and indulge in one of my favourite pastimes of people watching.

And if like me you like a bit of the al fresco culture, then you will simply fall in love with the Royal Park Hotel’s terrace gardens. The small but intimate gardens are surrounded with green plants around the perimeter and walls and can house up to 30 people. The Royal Park Hotel offers tailor-made drink and canapé menus for cocktail parties or even a barbeque for those few and far between British summer days. A real gem in the heart of London!

Room rates at the Royal Park Hotel  start from £180 for two people depending on the room you select and the time of year.