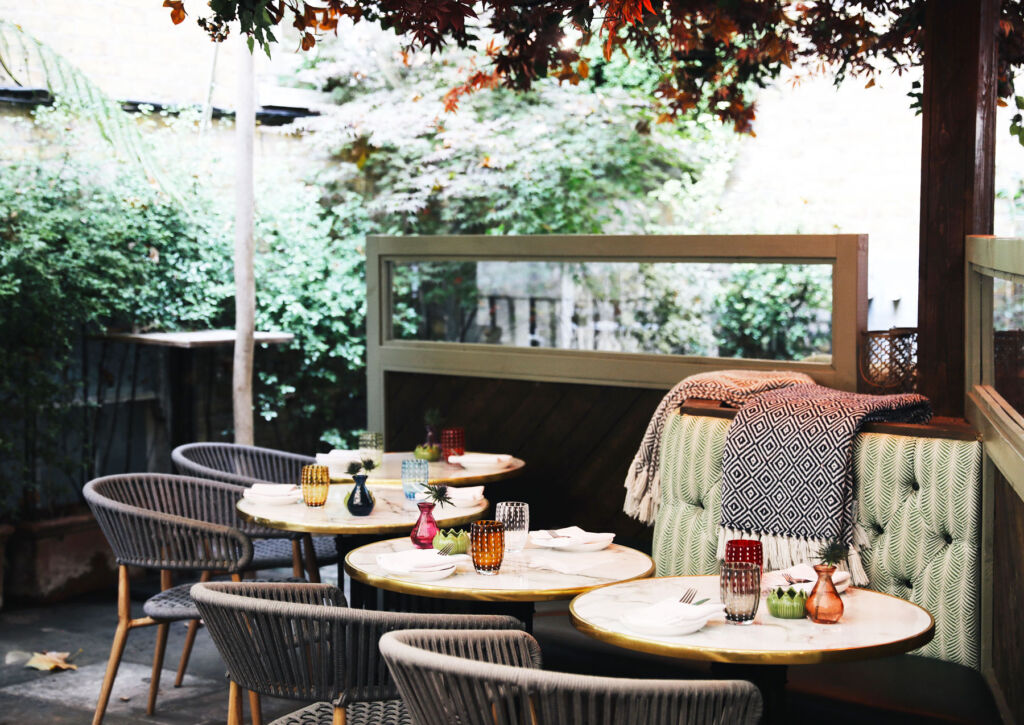 Simon Wittenberg heads out on a spring evening to dine at Stanley’s Chelsea, located just off of London’s famed King’s Road.

Stanley’s Chelsea is a restaurant tucked away at the intersection of Sydney Street and one of London’s famed thoroughfares going by the name of the King’s Road, frequented by SW3’s finest machines, such as Bentley Flying Spurs and Merc G-Wagons.

Sandwiched between two sizeable red brick buildings and set back from passing traffic and footfall, this venue occupies a discrete location. In fact, diners are required to pass through the inviting waft of food emanating from the adjacent Vietnamese noodle bar before climbing stone steps lined with ornate lanterns. 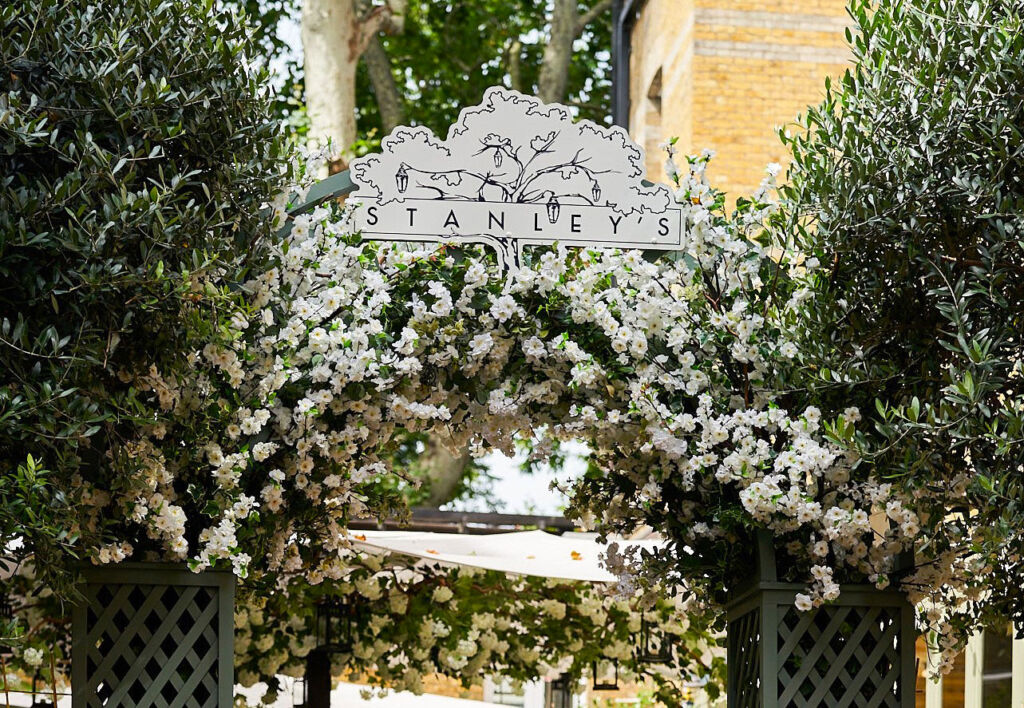 Entering Stanley’s Chelsea via a tree-lined and elegant floral arch, we were greeted on our Wednesday evening visit by owner Hugh Stanley, the nephew of the Earl of Derby, who hails from a family of racehorse breeders.

Now just 28, he previously spent eight years plying his trade in hospitality, working at the Tramp Private Members’ Club in Mayfair, and the local Sydney Arms, a privately-owned free house pub, before bravely deciding to go it alone in the very early months of the pandemic.

His chosen location for his new venture was a spot that was very familiar to him, the former premises of the Chelsea Courtyard Bar & Bistro – which was only open for lunch and more of a deli-style business, before the site ended up lying vacant as the shutters came down. Hugh, however, saw the potential for an all-day dining destination, and with a large outdoor space to match, this was ideal for accommodating customers within the realms of the restrictions introduced during the early days of Covid.

Getting in touch with the owner of 151 Sydney Street, Hugh proceeded to sign a long lease and completely transformed the space into an elegant indoor and outdoor gastronomic hotspot before officially opening the doors to Stanley’s Chelsea on 21st July 2020. 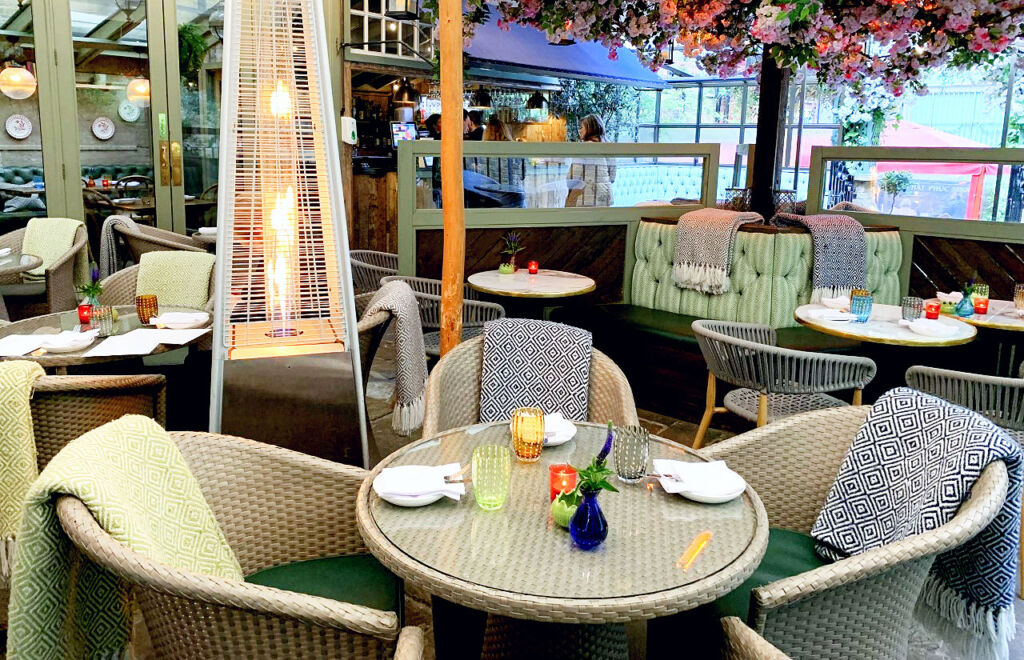 Guests have the option of taking a seat in three different areas. The first – the unique selling point of this eatery, and perfect for those who may still be a little nervous eating out in the company of others, is the spacious outdoor courtyard area (called the Orangery), which is inspired by an English country garden, and houses clusters of tables separated by reclaimed timber and glass screens, with added warmth delivered via the many patio heaters and the woolly blankets lining the chairs. 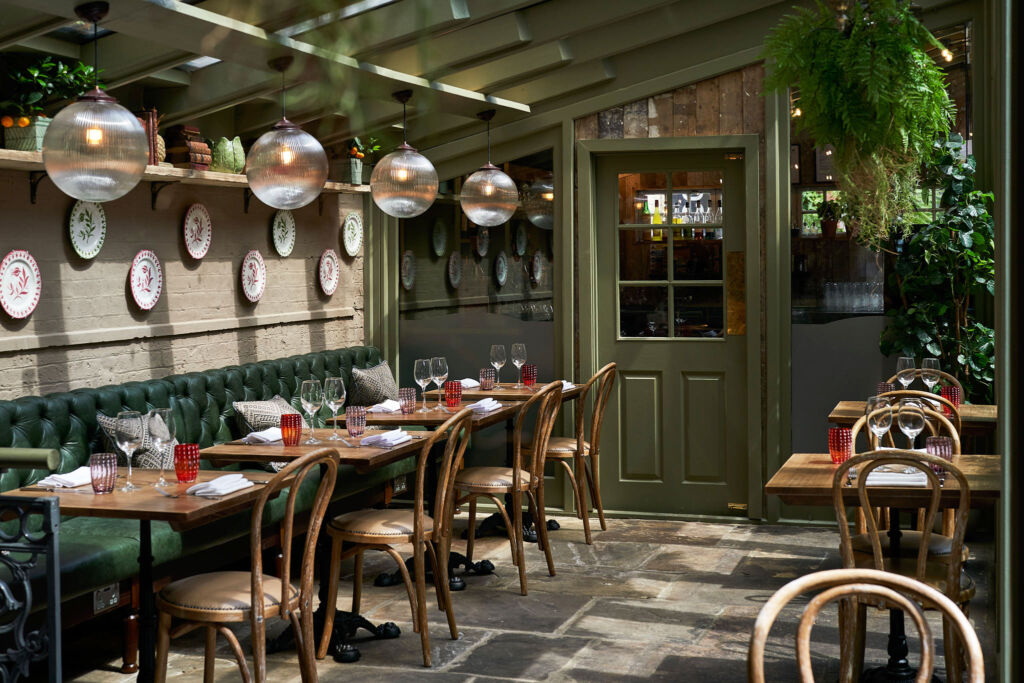 For visitors who do not wish to brave the cool breeze of a British spring evening, there is a light and airy conservatory-type area, which then leads into a dining room on the lower ground level. Combined, around 70 to 100 covers can be accommodated by Hugh and his team at any one time.

We decided to go al fresco and stationed ourselves in the centre of the courtyard, which started to fill up around 7 pm. During the week, it’s mainly the local crowd that gathers at Stanley’s Chelsea before out-of-towners descend on this venue at the weekend. 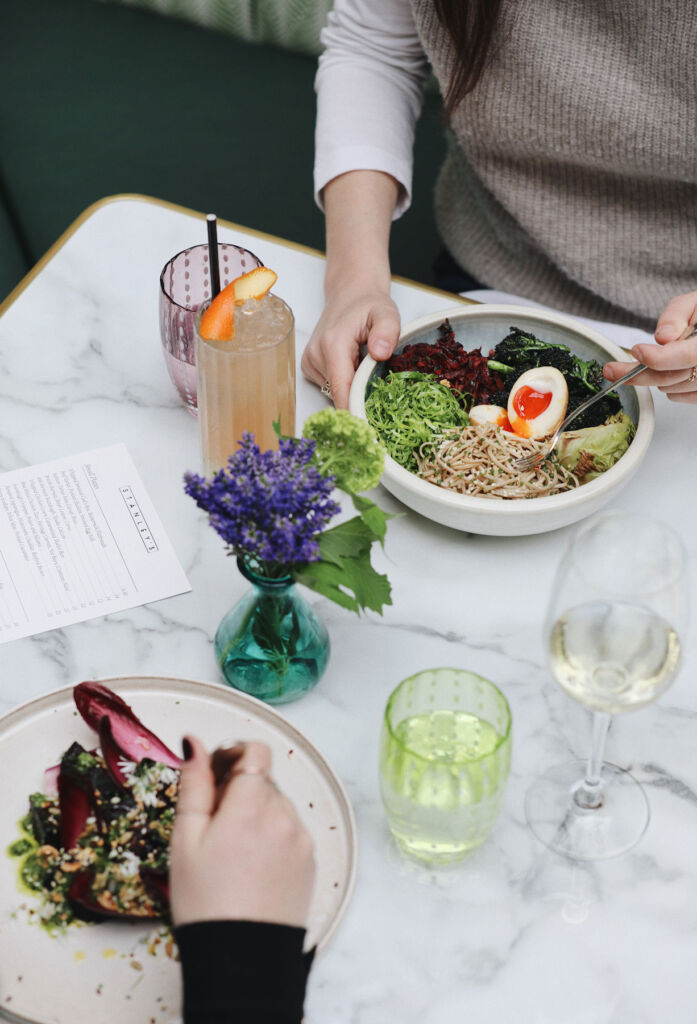 With the tables being nicely spaced apart, it is not overly noisy, although the occasional fly and hint of cigarette smoke may make an appearance – some of the minor perils of eating outside.

Peering at the menu, the choices are fairly limited, but what’s on there can only be described as mouth-watering and is sufficiently inviting to have to ponder as to what to have. With our taste buds springing into action with the help of some generous slices of fresh sourdough bread and whipped smoked butter (£4), we proceeded to order some pre-dinner drinks.

There’s a wine list and six different cocktails to choose from on the bar menu, but there is nevertheless scope to request a preferred beverage of choice, which is exactly what we did – a whisky-based Old Fashioned for my guest, and a refreshing Piña Colada for myself.

Starters are known as “small plates” at Stanley’s Chelsea, and take in veggie, fish, dairy and carnivorous options. There’s everything from asparagus to whipped feta and sundried tomato. After deliberating over whether to have the English Burrata with Heirloom tomatoes, I followed the recommendation of our host and went for the smoked salmon. 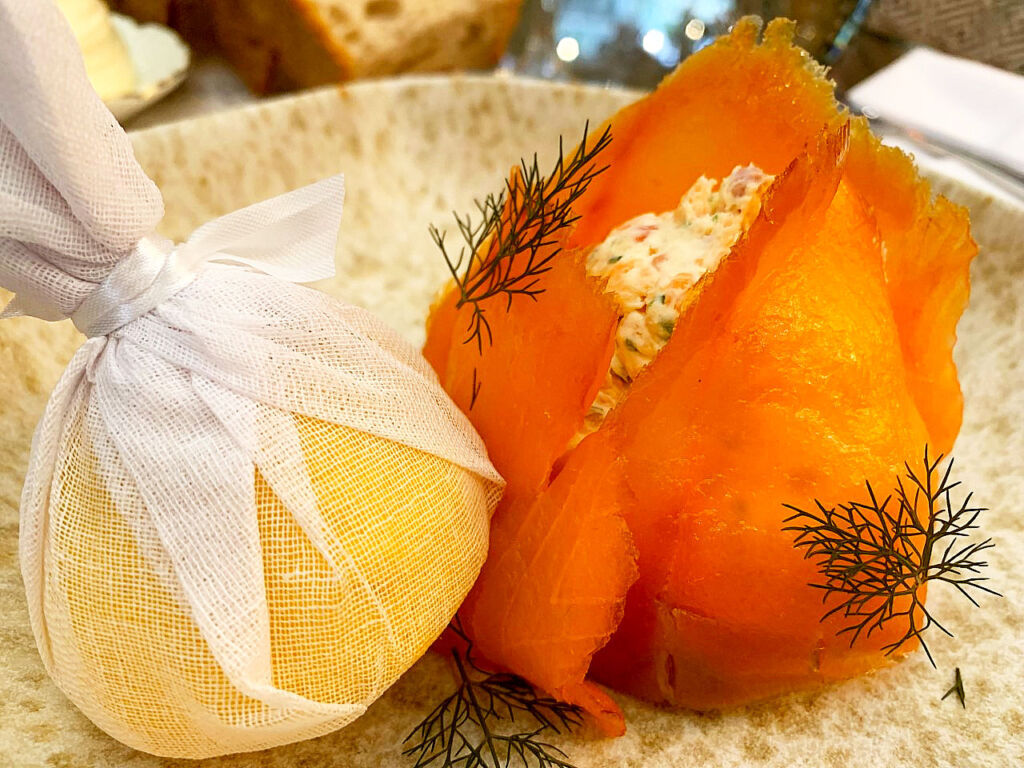 It was served in a similar shape to a rose flower – very apt for where we were dining, and was filled with a deliciously smooth and thick smoked salmon and chive cream with pink peppercorns (£18), topped with a sprinkling of lemon juice.

It was an exquisite dish, and similar success was had by my dining partner, who chose the melt-in-the-mouth thinly sliced beef carpaccio (£18) accompanied with whisps of sauce and thinly sliced onion rings. 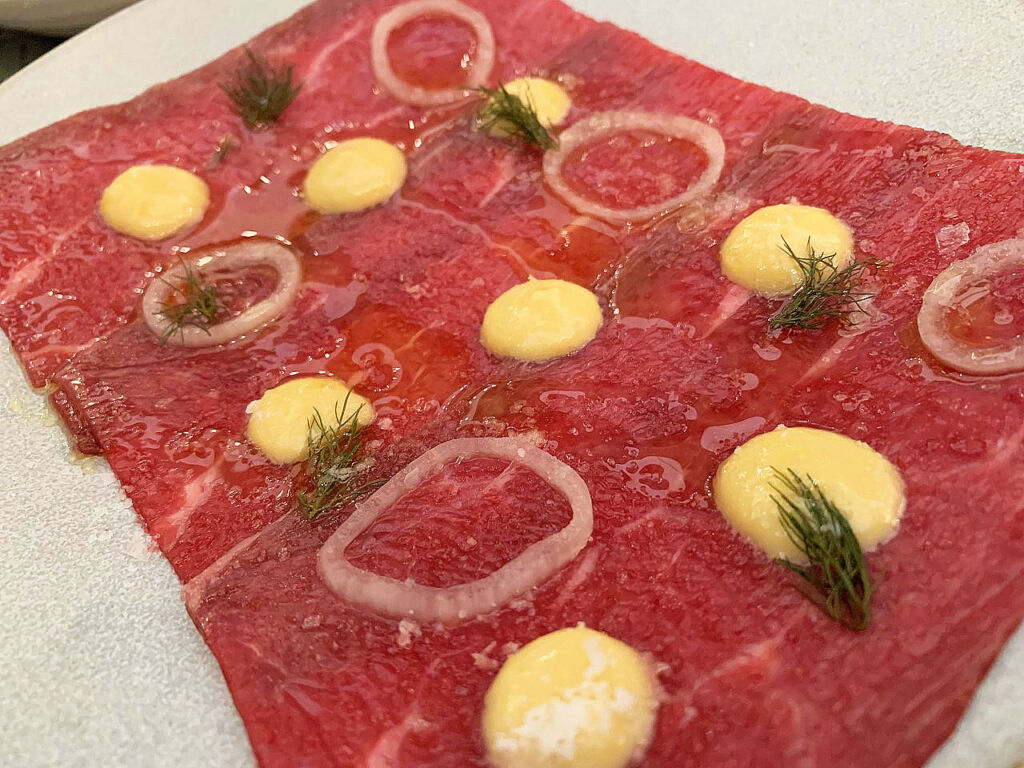 For the main course, it’s a decision between the seven dishes on offer, which range in price from £16 for the quinoa, Borlotti bean and toasted seed salad, to the whole grilled Sea Bream for £32 – a meal for two. There are no sides with any of the dishes listed, so the four accompaniments that are available, are an extra £4.95 each on top of the mains.

With a short break to rest the stomach and a few more sips of our cocktails, we proceeded to tuck into what we had ordered. I tried a portion of grilled halibut garnished with sea herbs (£24.50), which boasted a soft centre underneath the tender outer layer. 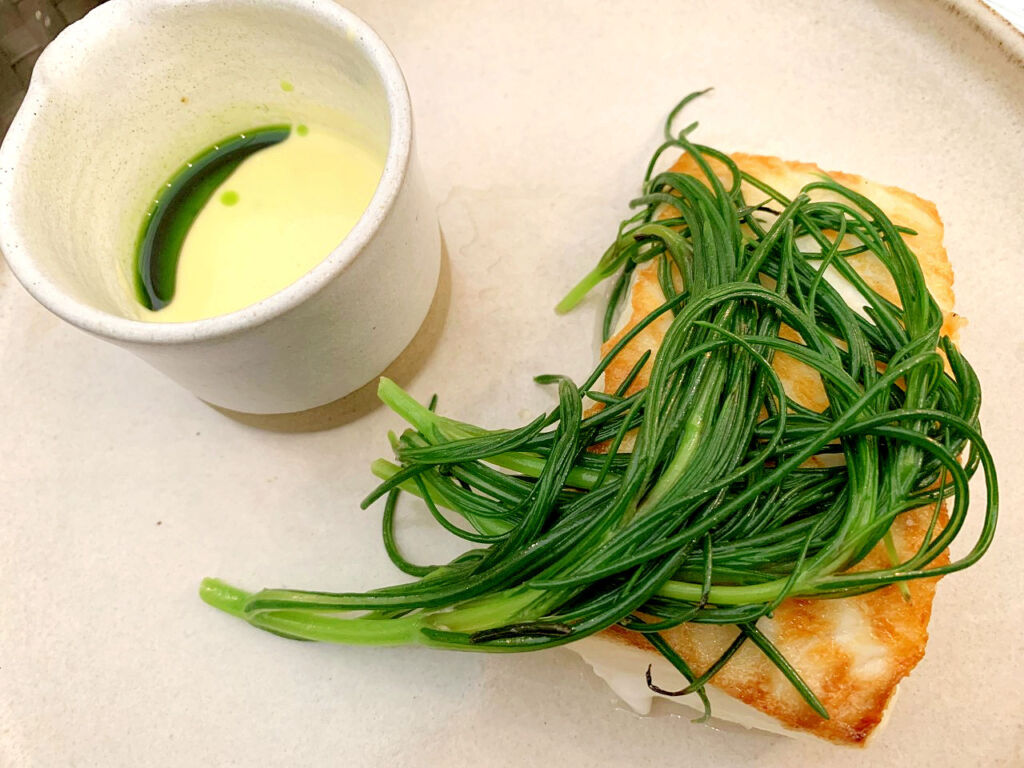 With added flavour coming from the creamy chive sauce, and sitting alongside our choice of nicely cooked Jersey Royal potatoes with garlic, plus a tomato salad featuring red, green and yellow varieties, it was a thoroughly delightful part of the meal. Cooked medium-rare, but a bit on the fatty side for the £28 price tag accompanying the 280g ribeye steak with a smoked beef fat sauce, this dish was nevertheless enjoyed by my dining partner.

To round off dinner at Stanley’s Chelsea, there’s only two sweets and a cheeseboard to finish on, which we found to be a touch too limited for this kind of establishment. What we did try was not the crescendo we had hoped for. The caramelised chocolate with whipped yoghurt and pink plums (£12) was not an entirely accurate description of what you would have imagined it to be. It arrived as a thick and very rich cream-like concoction where one spoonful was enough. 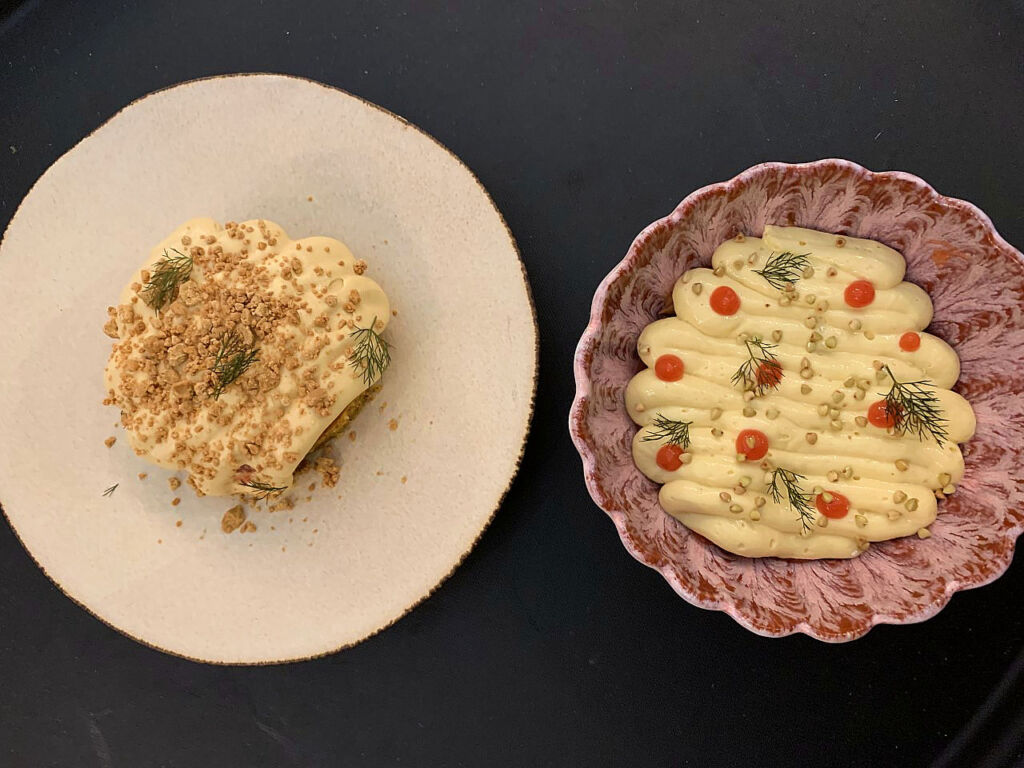 In comparison, the Earl Grey cake (£12) was more of a success, but was also accompanied by a sour cream-like brown sugar custard topping, presenting a sweet and savoury contrast. However, it was far more palatable, although slightly disappointing after what we had sampled during the previous two courses.

Overall, from what we experienced, the level of service was swift, efficient and friendly throughout, although not so rushed that you felt that your table was in high demand for the next sitting.

With an inviting and cosy setting, this is undoubtedly one of Chelsea’s hidden culinary gems and, thanks to the exceptional attention to detail and high standard of cuisine, Hugh and his team have certainly brought together the right ingredients to make this eatery a veritable long-term success.

Stanley’s Chelsea – Where and How?

Stanley’s Chelsea is located at 151 Sydney St, Chelsea, London SW3 6NT. For more information or to make a reservation, visit www.stanleyschelsea.co.uk. This eatery is open every day of the week from midday onwards.

See what we ate and drank at Stanley’s Chelsea on the Luxurious Magazine Instagram page. 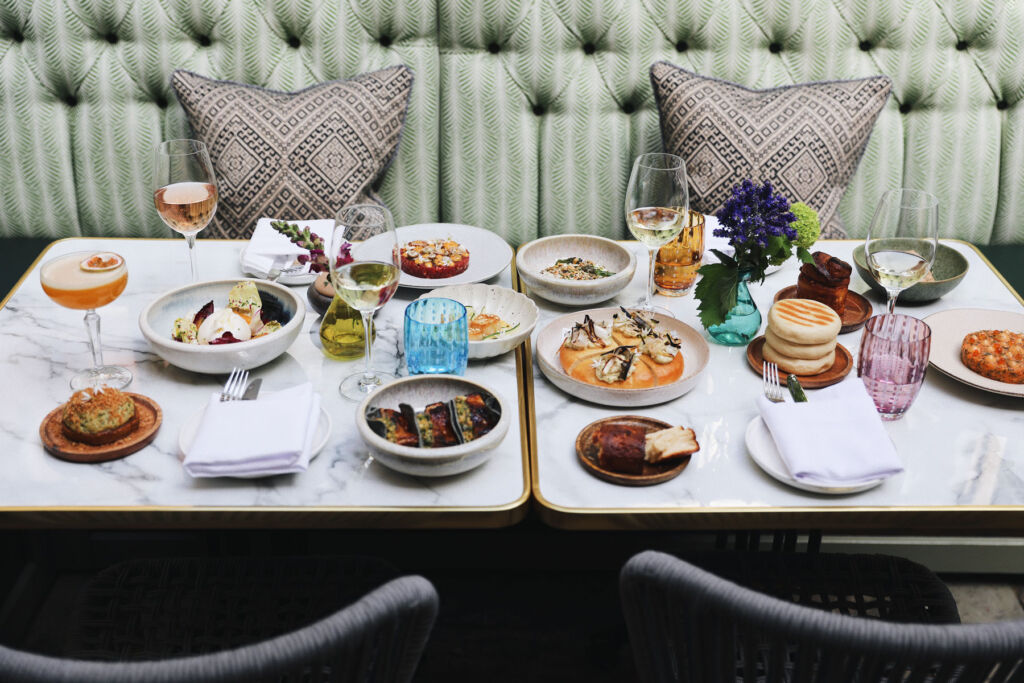