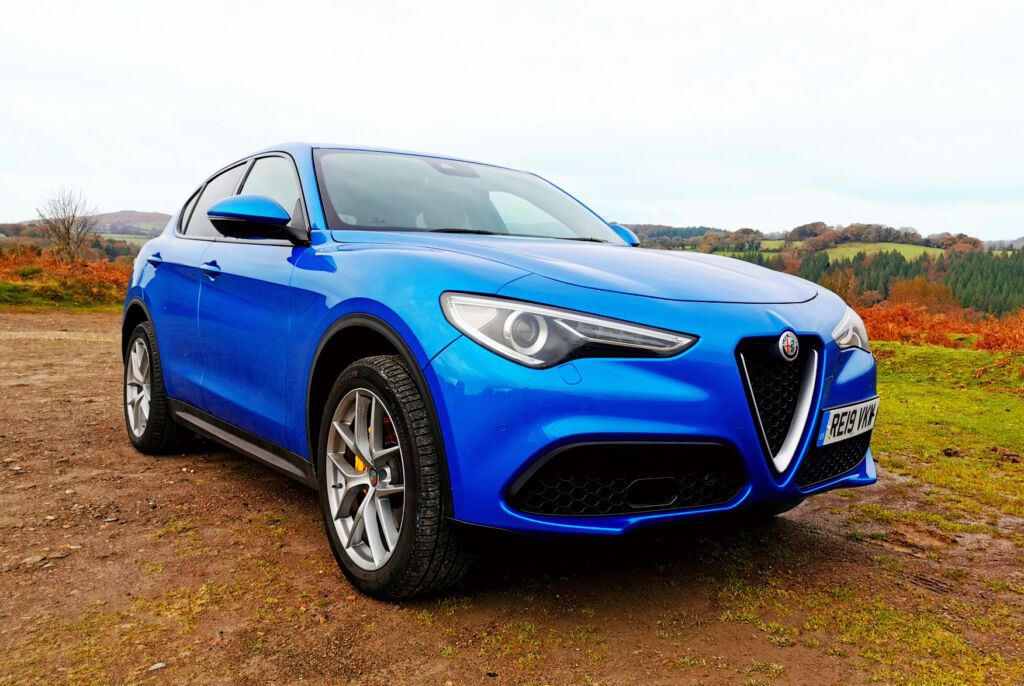 As 2019 draws to a close, we bid farewell to the Alfa Romeo Stelvio Milano Edizione 2.0Tb Q4 by spending a weekend with it on the scenic roads of Devon.

Overview
The Alfa Romeo Stelvio was officially introduced to the public in the UK at the 2017 Goodwood Festival of Speed, after being shown to the world as the Kamal concept four years earlier at the Geneva Motor Show.

Borrowing the name of the famous mountain pass in Italy, it was a significant moment in Alfa Romeo’s long history, as it became the brand’s first-ever production SUV, following in the footsteps of numerous other carmakers who looked to take advantage of the growing demand for this type of vehicle.

Developed in Alfa Romeo’s prestigious engineering centre in Modena, the Stelvio model is built at the FCA plant in Cassino, Italy, and sits on the Giorgio platform, which is also shared with other models, including Alfa Romeo’s Giulia saloon and the latest Jeep Grand Cherokee. 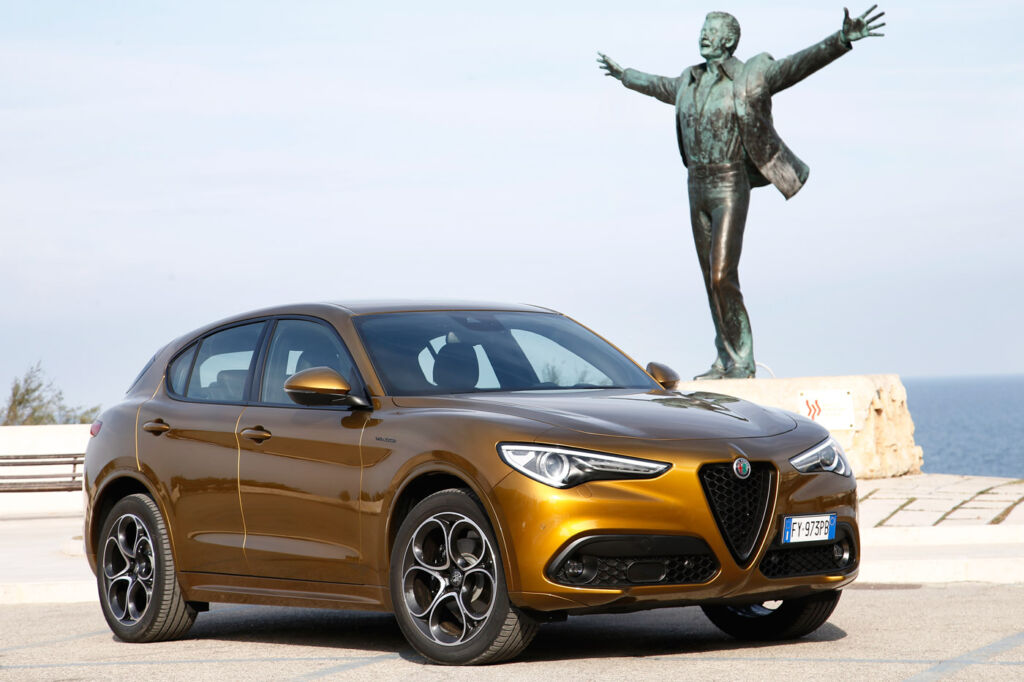 Four trim levels were made available when this five-door Alfa came to market just over a couple of years ago, which were the entry-level Stelvio (starting from a reasonable £33,990 OTR), the Super, the Speciale and the top-of-the-range Milano Edizione (a nod to the word ‘Milano’ previously found in the Alfa Romeo badge between 1910 and 1960). They brought a choice of a 2.0-litre turbocharged petrol engine (the 2.0Tb), or a 2.2-litre turbocharged diesel unit, married to an eight-speed ZF automatic transmission as standard.

With each of these powerplants built at the Termoli production facility, there’s a choice of horsepower – 180 hp and 280 hp for the petrol, and 180 hp and 210 hp for the latter. Our test car in Milano Edizione trim came with the 280 hp petrol unit, a combination which recently started with an OTR price of £46,205 when on sale.

In September 2019, the Milano Edizione passed the baton to the Stelvio Ti (Turismo Internazionale”) to spearhead the line-up until the MY2020 Stelvio Veloce arrives at the beginning of next year, and carries a price tag before options of £47,345 OTR. Above all of these grades, you also have the mighty £71,000, 503 hp, bi-turbo 2.9-litre V6 Quadrifoglio (the Italian word for four-leaf clover). 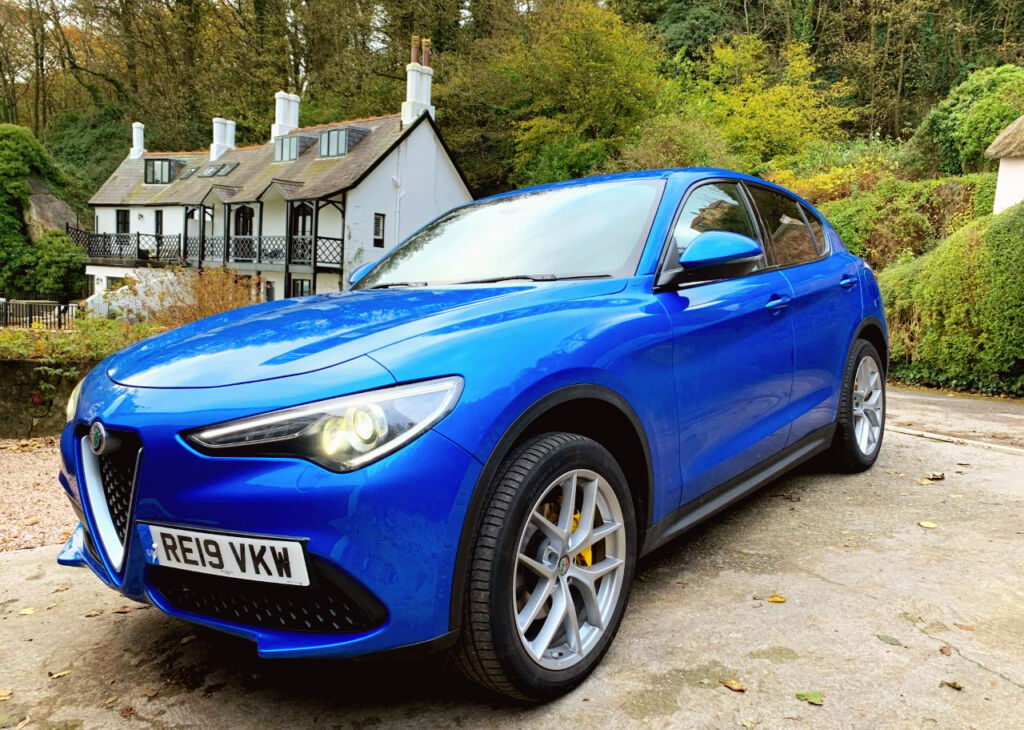 On the outside…
The Stelvio Milano Edizione is undoubtedly a good-looking car and is full of Italian flair, thanks to this model being styled by Alfa’s very talented Chief Designer, Alessandro Maccolini. The front is characterised by sharp inward-facing headlamps and a very deep ‘V’-shaped grill, which sits below the iconic circular Alfa Romeo badge featuring a red cross and a man being gobbled up by a green serpent (supposedly the symbol of the influential Visconti family of 11th century Milan). 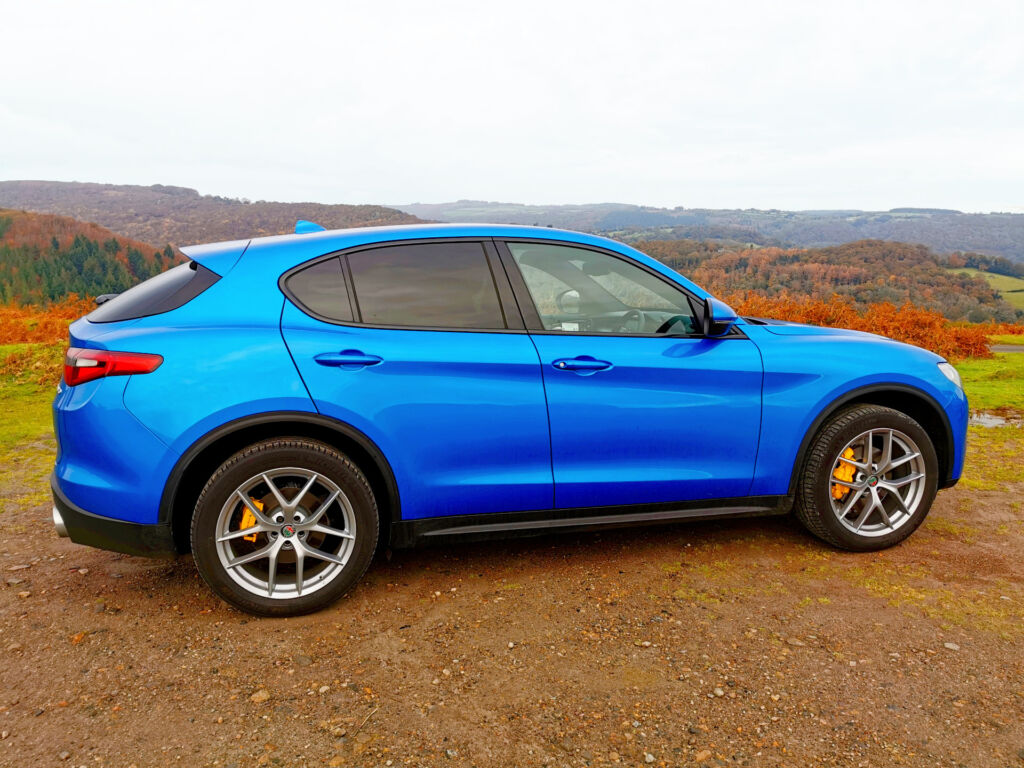 The side profile is dominated by a sweeping rear with blacked-out privacy glass, whilst the bright Misano Blue metallic paint, a shade exclusive to the Milano Edizione variant, really brought out the dynamic lines on our test car. Furthermore, the Stelvio’s eye-catching 20-inch V-spoke alloy wheels shielded bright yellow brake calipers. 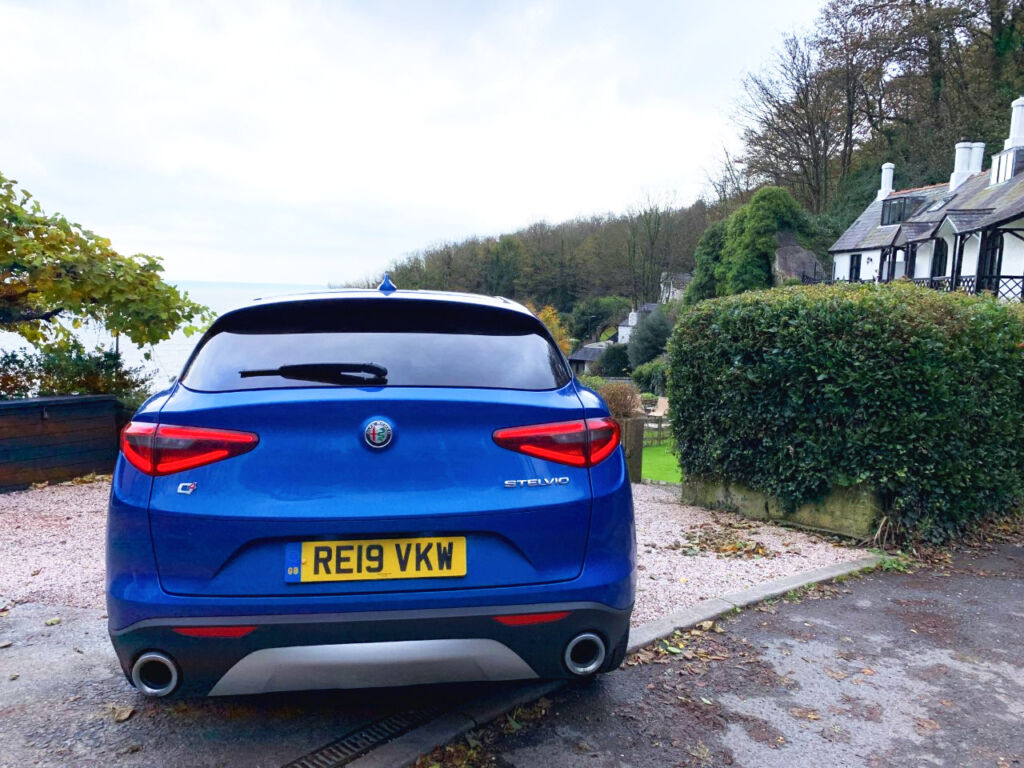 At the rear, the LED lamps and twin exhausts create a sporty look, and the Q4 badge indicates that the model is fitted with Alfa Romeo’s All-Wheel Drive system. This piece of technology monitors grip conditions and the driver’s inputs in real-time to ensure the best performance and ideal torque distribution between the axles.