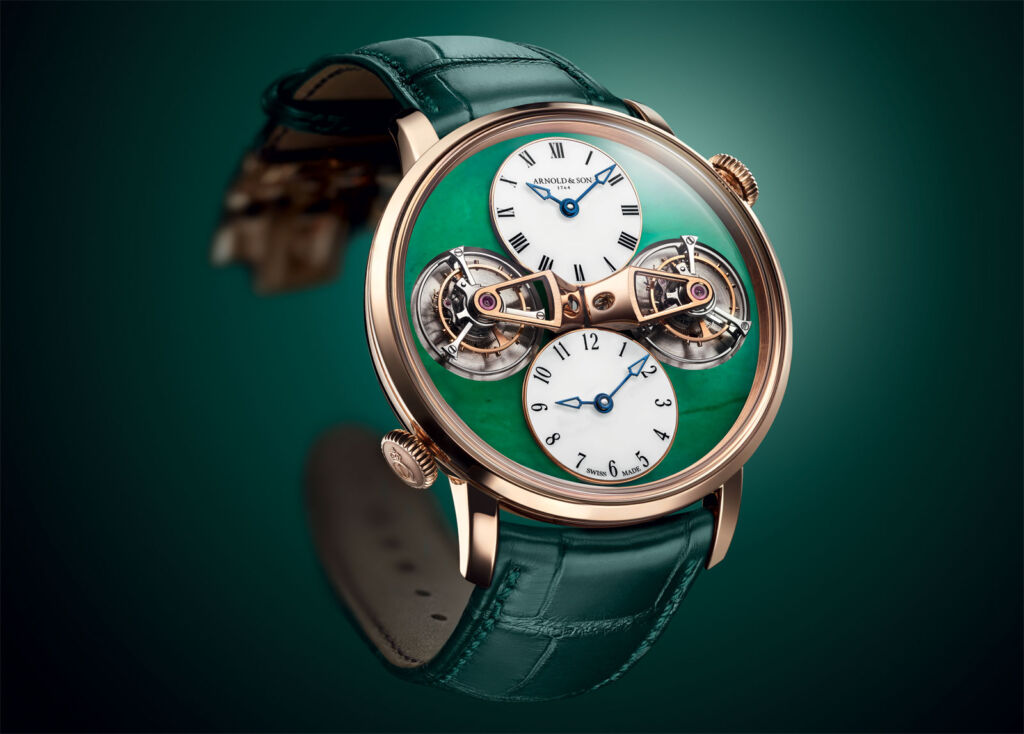 Jade is one of nature’s greatest gifts, and in some cultures, it is considered lucky and more precious than gold and silver. For their Double Tourbillon Jade models, the renowned watch company Arnold & Son has decided to use a particular type of Jade from the Rocky Mountains of Wyoming, USA.

The Arnold & Son Double Tourbillon Jade is a true statement piece. It is a large watch at 43.5mm in diameter, but it has to be to showcase its full beauty. The timepiece boasts a delicate white Opal within the design, along with the two rare stones, and the case is available in either red or white gold.

A feature of this model is the double barrels and crowns that control the two time zones. The two time zones are entirely independent down to the minute, so you will always be abreast of the situation. Arnold & Son’s two Double Tourbillon Jade is ideal for travellers as it allows you to follow time zones offset by 15, 30 or 45 minutes. I believe this is unique to the watch company and shows its forward-thinking.

Arnold & Son’s creations are gaining a reputation for singularity and symbolic strength, and its Double Tourbillon Jade models are great examples of this. The movement allows the two independent tourbillons to emerge into view above these rare stones. Combined with a shared main plate, each tourbillon displays a different time zone. 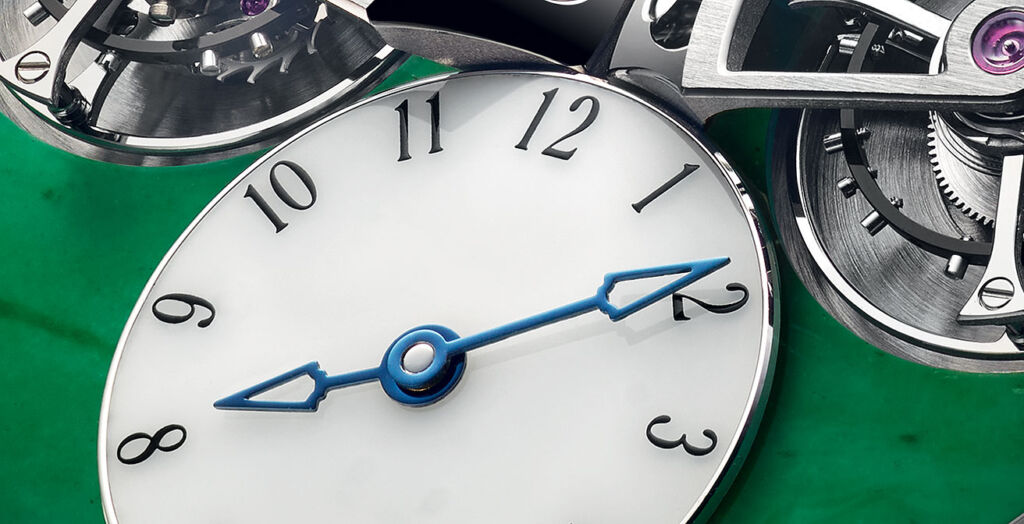 The Jade
Arnold & Son specifically chose to source Jade from Wyoming due to its unique structure and colour. It is bright green nephrite known as “Apple Green” that is slightly veined with black.

Jade is linked to traditional medicine, sacred beliefs and protective rituals of several Asian and Central American civilisations where it is sourced. The cultural significance of the stone makes it like no other in the world.

The Jade has been expertly cut in a particular way for the dial plate of the Double Tourbillon Jade. The cutting of the Jade highlights the mastery of the watchmakers at Arnold & Son. The main dish allows both dials and tourbillons to emerge to their full height in the shape of a clover. 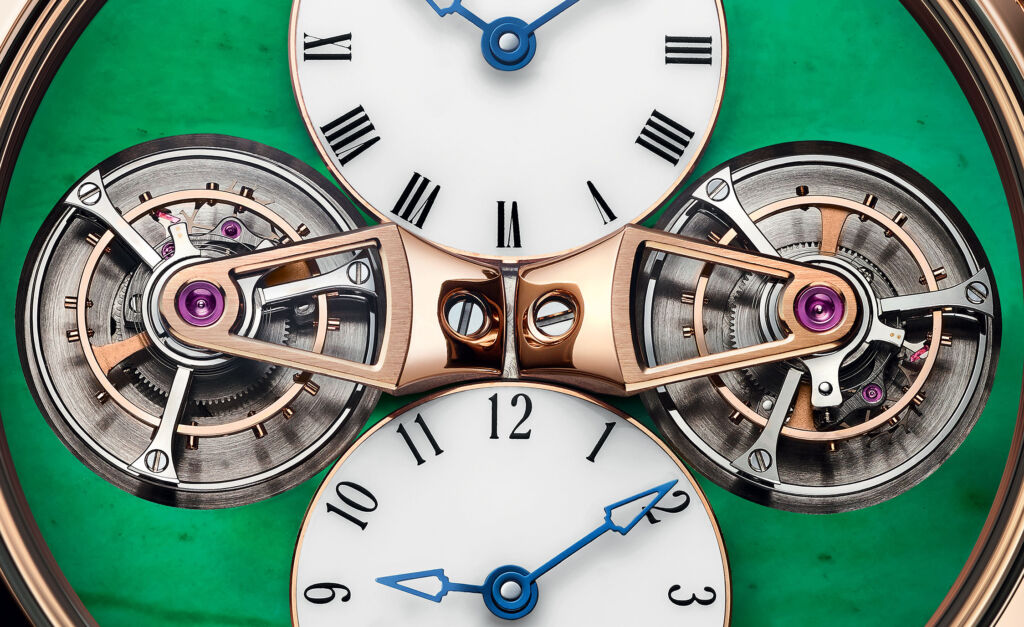 The Double Time Zone
The Double Tourbillon Jade has a Double Time Zone, a homage to the founder of Arnold & Son, John Arnold. The company has always had an affinity for producing timepieces with dual time zones showing their sophistication and precision. Instead of the classic “GMT” system, where an hour hand in the centre indicates the second time zone, Arnold & Son has chosen to give each time zone a regulating organ. This reflects historical timepieces carried onboard English frigates in the 18th century.

An automatic movement is at the heart of the watch, and it has a power reserve of Ninety hours, so you should always find it ready to use. The movement’s structure can be seen on the back of the Double Tourbillon Jade, which is a lovely detail.

A specialism in Arnold & Son watchmaking is the highly successful finishing of its timepieces. It can be seen clearly with either of the Double Tourbillon Jade models with their radiant Côtes de Genève to the circular-graining on the main plate, double snailing of the barrels, sunray decoration on the crown wheels, and polish on the gold bezels held in place by blued screws. 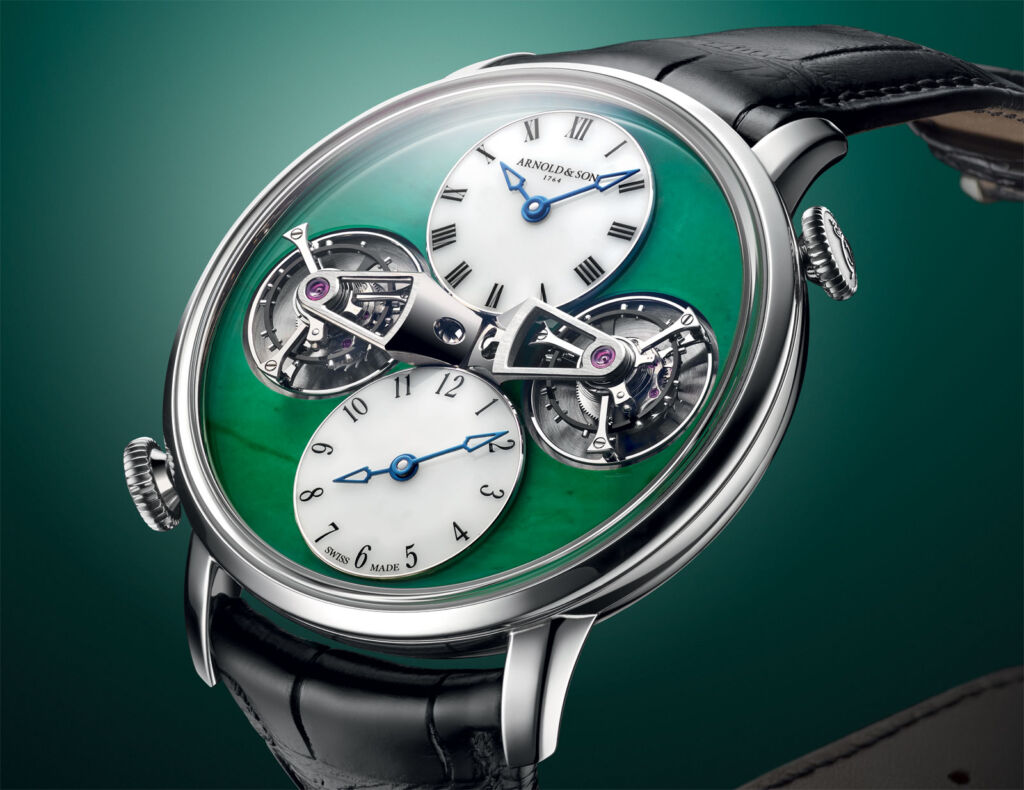 The Double Tourbillon Jade will undoubtedly create interest with many watch collectors, particularly those based on the Asian continent. The elegance of the movement, the fine detailing such as the clover shape and the Roman and Arabic numerals, places this new release squarely in the domain of horological art.

To find out more about the Double Tourbillon Jade or any of the other models currently available from Arnold & Sons, please visit, www.arnoldandson.com.