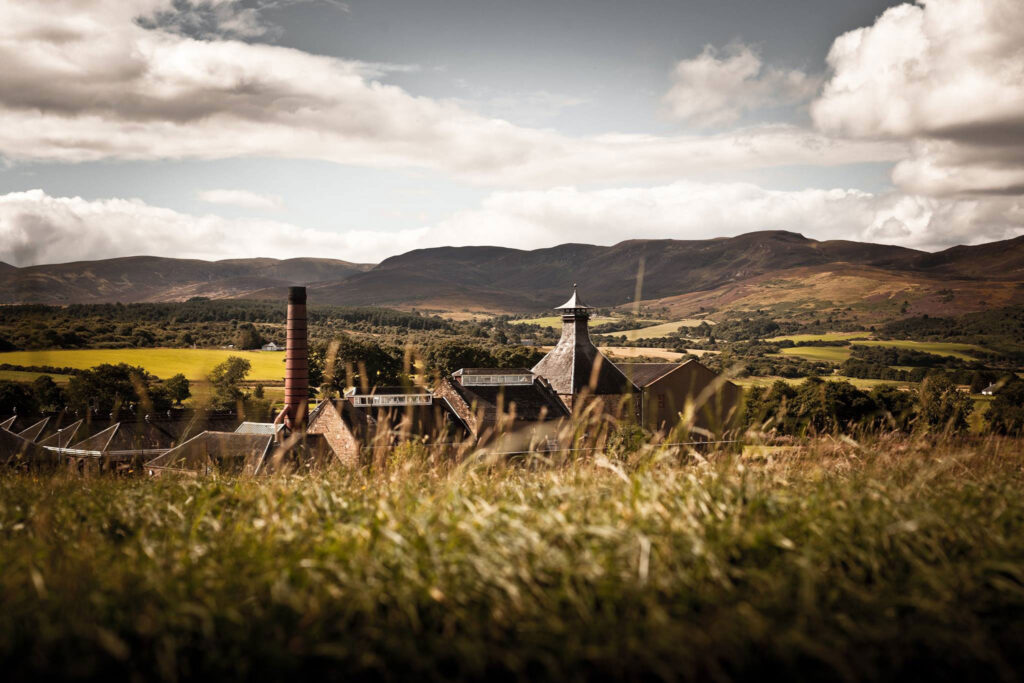 With an impressive 47 distilleries sprawled across the highlands and islands, the Highland whisky region is Scotland’s largest geographical whisky production area. Not one to be pigeonholed, Balblair in this part of Scotland, is the oldest distillery, having been here since 1790. Sabi Phagura headed to the distillery to find out more.

Before lockdown, Scotch Whisky tourism saw a record number of visitors in 2018. According to the Scotch Whisky Association (SWA), the figure rose to over two million visits to Scotch Whisky distilleries for the first time. The annual survey compiled by the (SWA) revealed visits were up 6.1% year on year and 56% more than in 2010. Perhaps it’s because Highland whiskies are so diverse, boasting an array of styles from fragrantly floral to rich and textured.

My father has been a whisky aficionado since I can remember, and so I have known a thing or two about whisky from him. But a tour of Balblair distillery means I can now impress him with my knowledge of this golden liquid next time I see him. 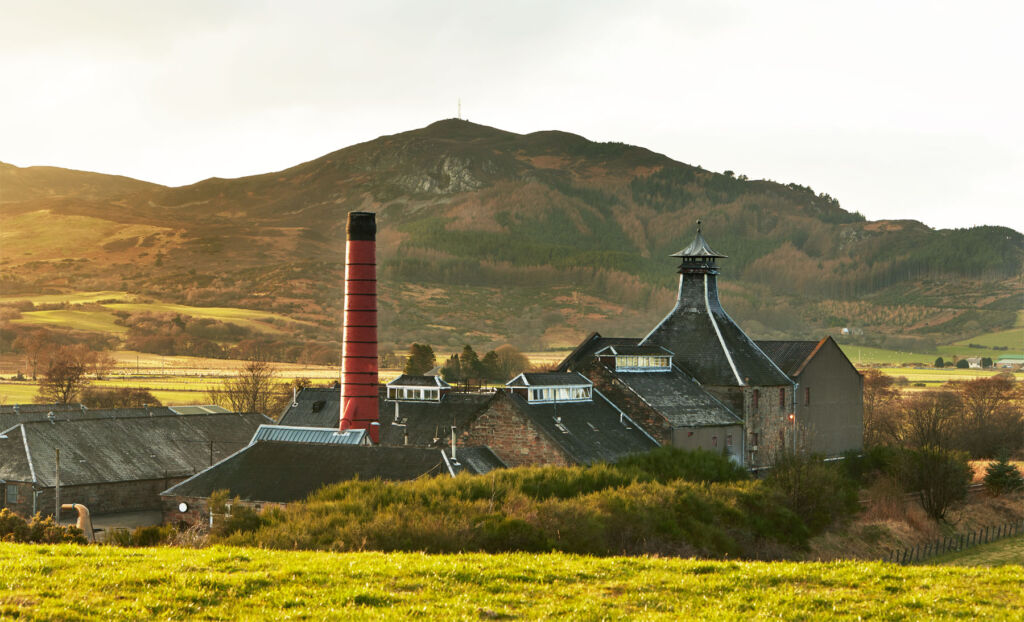 History
As the quintessential distillery, Balblair sits on a remote, unspoiled hillside overlooking the Dornoch Firth in the North of Scotland. Just a 40-minute drive from Inverness airport, the Highland home sits on an ancient Pictish gathering place, giving it an intriguing, mystical feel. The Picts gathered over 3,000 years ago and were watched over by the solitary Clach Biorach standing stone, which sits next to the distillery to this day. An iconic carved Z Rod marking bears witness to this rich history and is symbolised on each bottle of Balblair.

Founded in 1790, the original site was abandoned two years later to move production closer to the railway. The Ross family originally operated Balblair Distillery, but a century later, Alexander Cowan took over. Sadly, like most distilleries at the beginning of the 20th century, Balblair suffered.

The whisky industry changed dramatically after World War Two and has changed hands several times since the 1970s. Today it’s owned by International Beverage Holdings, and in 2007 they decided to release Balblair as a vintage spirit. 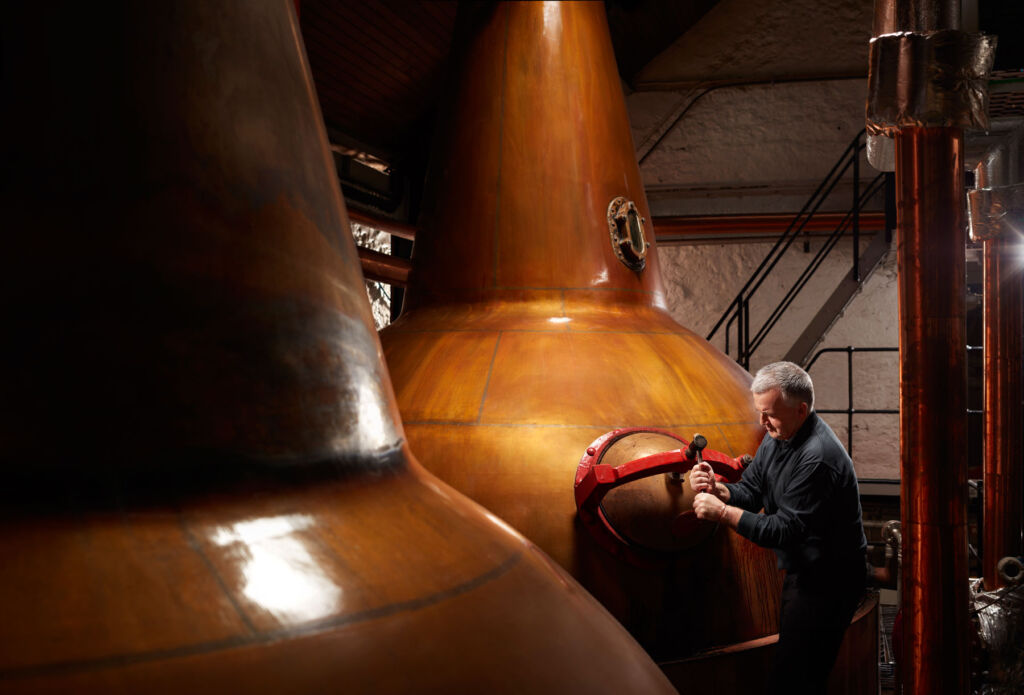 In a world where everything seems to happen at lightning speed normally to optimise profits, it was encouraging to hear from distillery manager John MacDonald that Balblair have somewhat a different reproach to how things are done. Life at the distillery is unrushed, and quality is heralded as the most important trait above all else. Consequently, it takes an exceptionally long 62-hour fermentation to make this spirit and a further four and a half hours of slow distillation. 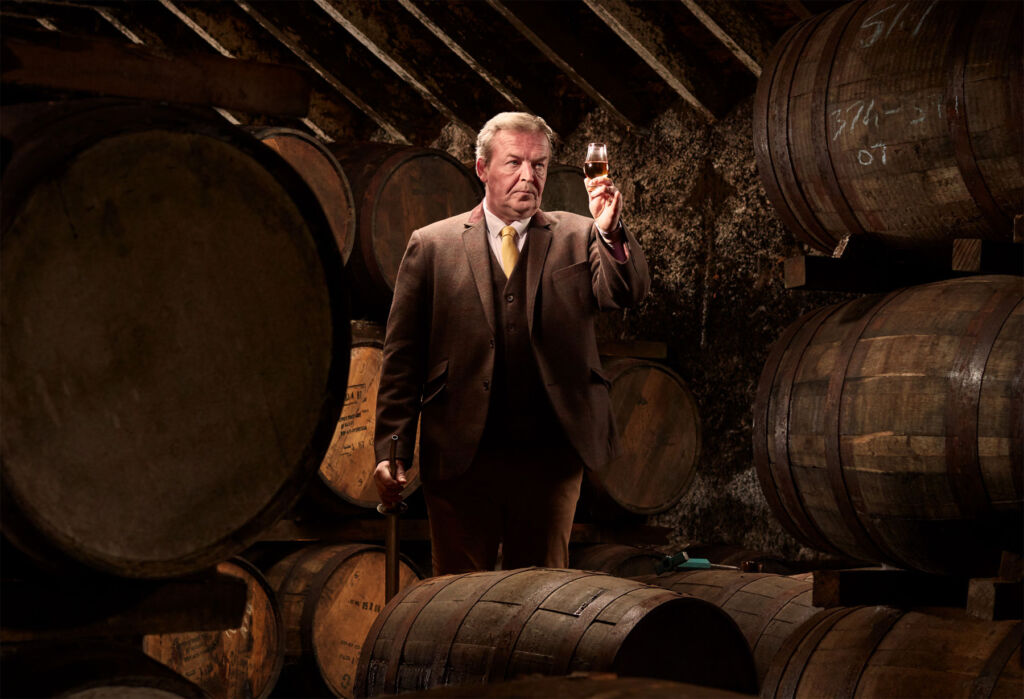 This is done deliberately to lock in Balblair’s unique flavour that not only comes from Black Isle Barley and the crystal-clear pure water that flows down the Edderton Hills to capture the natural local flavour, but also from casks and the slow processes which preserve its character. And the proof, as they say, is in the pudding for Balblair whiskies won five Gold Outstanding and Gold awards at the 2022 IWSC Awards (International Wine and Spirit Competition).

Balblair’s 12, 18, and 25-year-old whiskies received the highest accolade from the judges, all being awarded the coveted Gold Outstanding medal. Their 15- and 17-year-old both won Gold at this year’s competition. 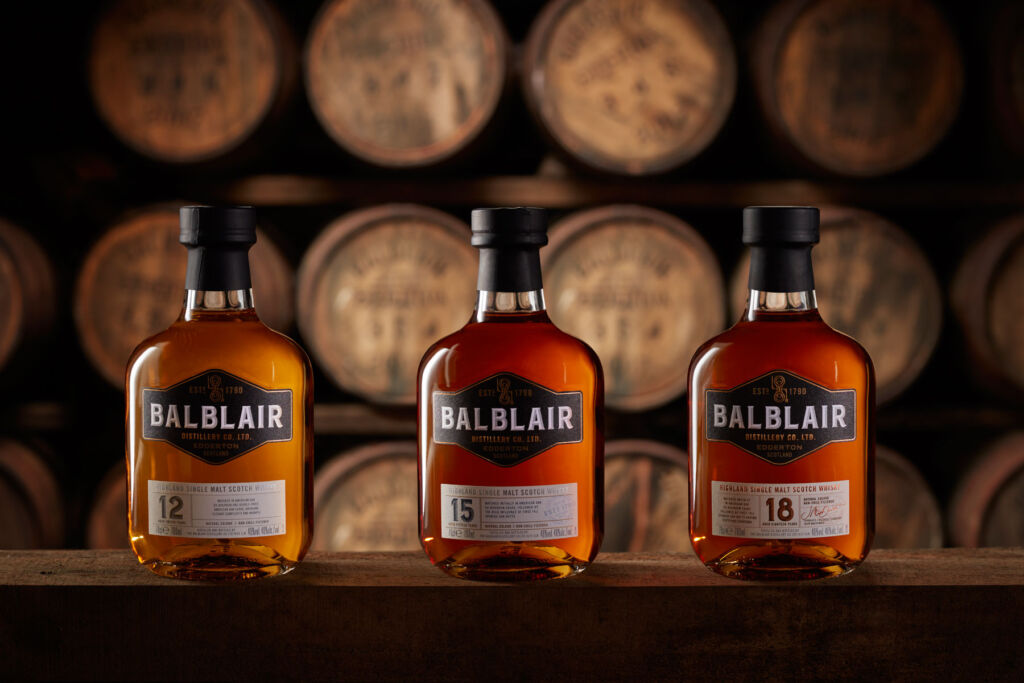 Whisky tasting
Under the UK’s ‘Scotch Whisky Regulations’, a Single Malt Scotch Whisky must be made exclusively from malted barley, must be distilled using pot stills at a single distillery, and must be aged for at least three years in oak casks of a capacity not exceeding 700 litres. At Balblair, whisky takes a lot longer than this recommended time, and we were all treated to tasting their four age statements available in 12,15,18 and 25, all at 46% ABV.

Balblair 12-Year-Old
The defining expression of the distillery, the 12-year-old, is a balance between fruit spice and sweetness and has pale gold. This was the only whisky that we were advised to drink with just a pipette measure of water. It was still strong for my tastebuds even with the water added. I only wished I had John’s recommendation pairing of orange-infused milk chocolate to improve my tasting experience. As a chocolate lover, I had to pose the question of which sweet treat to go for after each individual tasting.

Balblair 15-Year Old
Second up was the 15-year-old, which was dark amber in colour in contrast to the first. The single malt is matured in ex-bourbon casks and finished in first-fill Spanish oak ones. This, for me, went down much easier than the first as it felt more mellow on the tongue with hints of honey and spiced gingerbread. It didn’t have the spicy aftertaste as it was more mature than the 12-year-old.

Balblair 18 Year Old
Again amber in colour, this tasted far sweeter than the previous. This is due to the rich toffee and baked pear aromas through to the apricots, seasoned oak and vanilla custard coming together on the palate.

This smelt a lot sweeter, too and a step above the 12-year-old. Again, I wish I had some chocolate to help it slide down more easily. That’s just a personal choice, mind, as I have an incredibly sweet tooth. We were told it paired very well with 80% of good-quality dark chocolate. 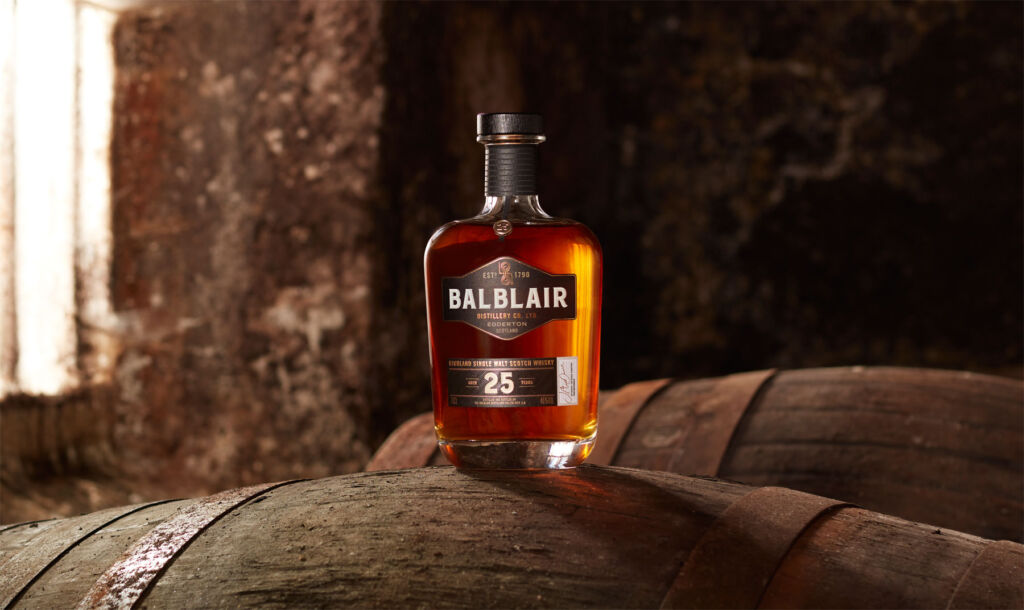 Balblair 25 Year Old
Nurtured for over a quarter of a century, rightly has a hefty price tag. At £500 a bottle, this one is to be savoured. I was almost too scared to taste it because surely, at that price, if I didn’t like it and it would be a waste of good quality whisky. But thankfully, I did like it.

It was sweet without it being syrupy, and it didn’t have any of the elements of the younger whisky’s strong elements of the 12-year-old. It’s a full-bodied whisky, decadent and easy to drink, and for me, it was hands down the best out of the four. Who knew I could have such expensive taste?

Precious Time
The unspoiled, tranquil Scottish Highlands has always been a favourite haunt of mine, and it was great to spend some time there during my visit. And to reflect the unrushed craft behind Balblair’s single malt whisky, the brand recently partnered with internationally acclaimed Scottish photographer and director David Eustace.

The 90-second clip, available to watch on the distillery’s website, was created to encourage the nation to embrace precious moments. It features stunning vistas which were captured in the heart of the Northern Scottish Highlands, in the scenic and unspoilt surroundings of the Balblair distillery. 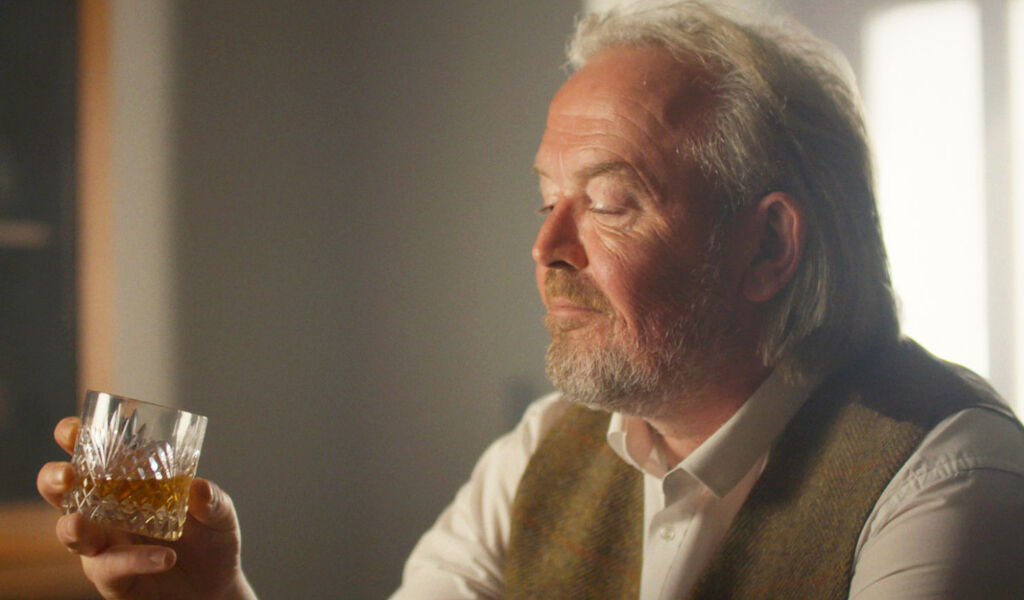 Distillery Manager John stole the show in the short film in which he is seen pouring himself a dram as he reflects on what precious time means to him. He said he hoped that the clip would encourage viewers to reflect on what is important, similar to how things are done at the distillery. “At Balblair, time is a defining part of who we are. We take our time and believe in quality above all else, which is why our product is worth the wait,” said John.

The film follows John as he writes a letter, which creates a powerful image and communicates a wider message. We can take a lot from this thought-provoking film. Nature provides us with the greatest inspiration when it comes to slowing down in such a fast-paced world.

It’s impossible not to switch off and feel a sense of peace when enjoying such glorious scenery. What Balblair depicts in both the film and its work ethics is beyond just a whisky. It’s a lifestyle where precious time is cherished and encouraged, and we could all take heed of this in our busy lives.

Balblair – Where and How?

For more information on Balblair whisky and to book a tour, visit www.balblair.com.

Read more news and features from the spirits industry here.