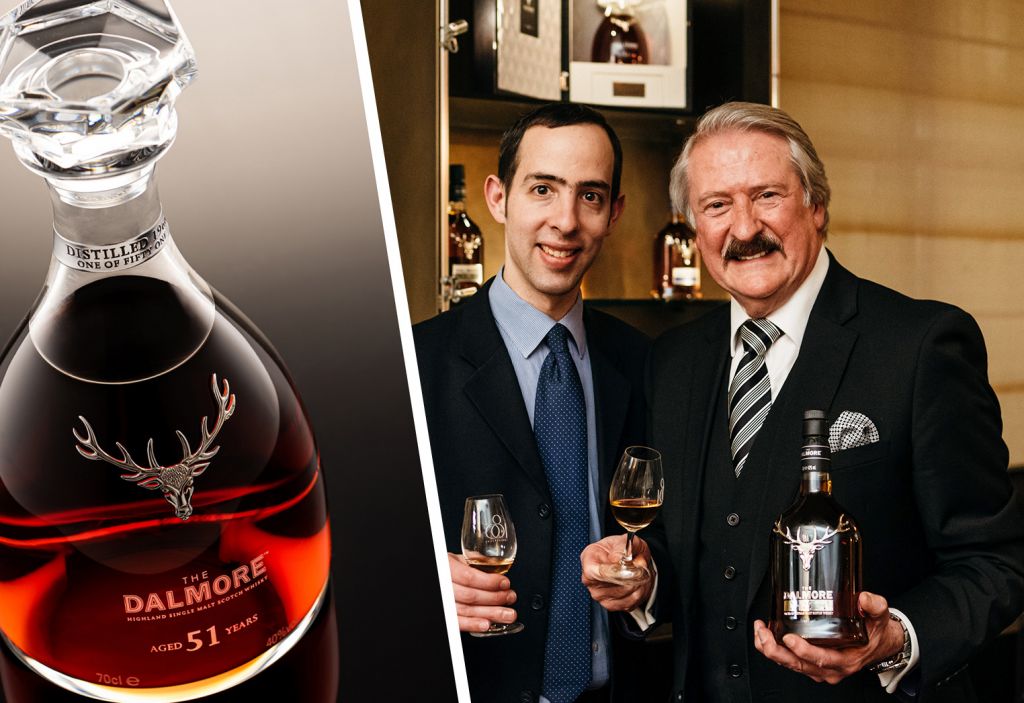 The Dalmore, the 180-year-old distillery located in Alness, Scotland, has unveiled a rare 51-Year-Old single malt. Officially called the Aged 51 Years, it’s the first release of the new decade, and reflects the whisky maker’s pioneering spirit and enduring legacy.

This is not the oldest expression that The Dalmore has ever launched. Their 62-Year-Old was introduced in 2002 and was followed by The Dalmore 64 Trinitas in 2010, where only three bottles were made available, hence the name.

Two of these were sold in Harrods for £100,000 each, whereas the third was bought for the slightly more expensive sum of £120,000. It became the first whisky in the world to surpass the six-figure mark in terms of its cost and ended up in the hands of three individuals, namely the US-based whisky collector Mahesh Patel, Sukhinder Singh, one of the world’s leading whisky specialists, and an anonymous buyer in New York.

It is believed that these bottles still haven’t been drunk, and are now worth a combined £1.3 million. Then, of course, there was the 60-Year-Old of 2019, presented to celebrate the brand’s latest milestone.

Priced at an eye-watering £55,000 each, only 51 bottles of The Dalmore Aged 51 Years are available worldwide for purchase. Although out of reach for many, they’re considered priceless by Master Distiller Richard Paterson. This is because the expression contains whiskies that are very special, originally brought together in ex-bourbon casks made from American white oak wood found in the forests of Missouri. 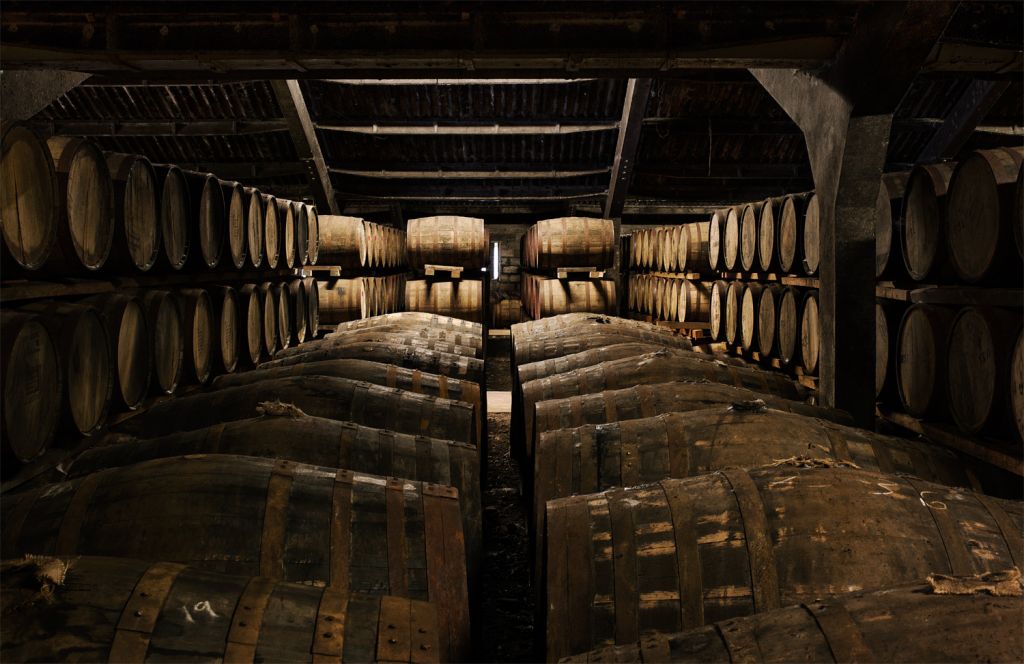 The spirit was then laid down in prestigious Port Colheita 1938 casks for four years, which were full of body and character, and where notes of damson plums and Morello cherries came to the fore. 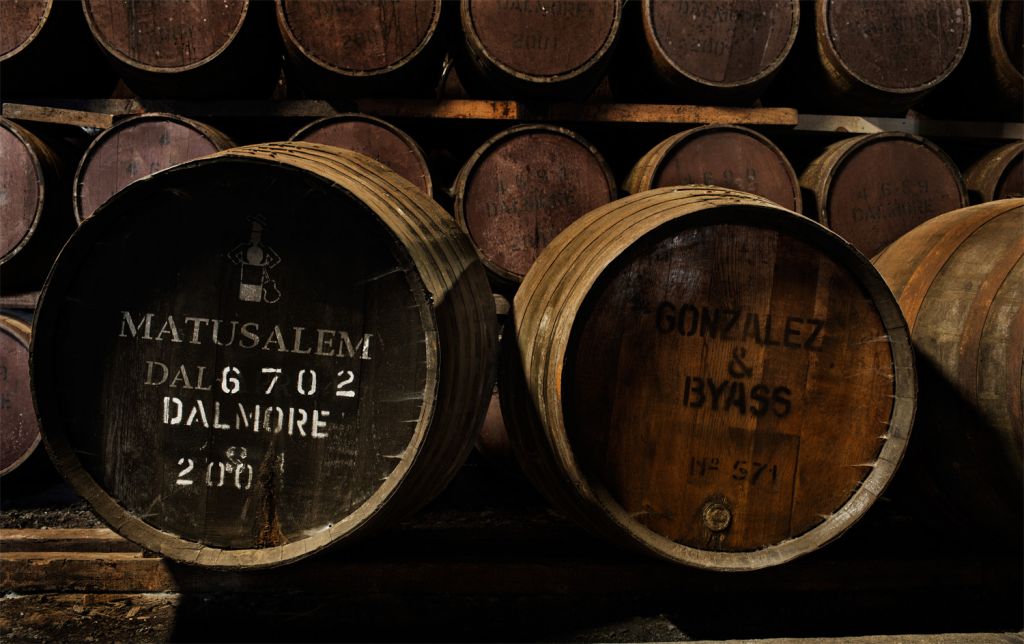 The next step of the half-century-long journey saw the transfer of the whisky to exclusive Matusalem Sherry casks from Gonzalez Byass for a period of five years (the name ‘Matusalem’ derives from the biblical word ‘Methuselah’ meaning ‘extremely old’).

Matusalem Sherry is a blend of 75% Palomino and 25% Pedro Ximenez aged for over 30 years, with 127 grams of sugar per litre. This gave the 51-Year-Old hints of marmalade, Napoleon cake and sultanas, and to marry these notes perfectly with those of the Port casks; the spirit was then put back into the bourbon barrels for a final flourish, demonstrating how deeply The Dalmore treasures the sanctity of the cask. 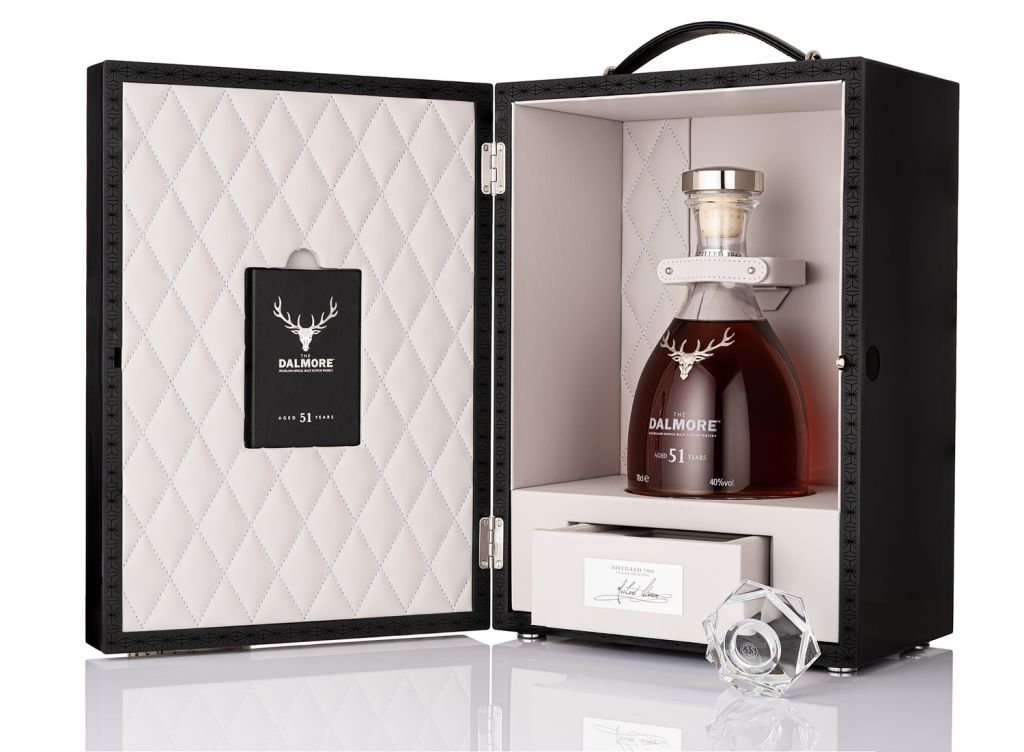 Having personally seen decanter ‘number one of fifty-one’ on display, this expression, which is bottled at a natural cask strength of 40% ABV, is presented in a stunning and beautifully-crafted crystal and teardrop-shaped vessel. It is adorned with The Dalmore’s iconic 12-point ‘Royal’ stag in Sterling silver and crowned with a crystal stopper. 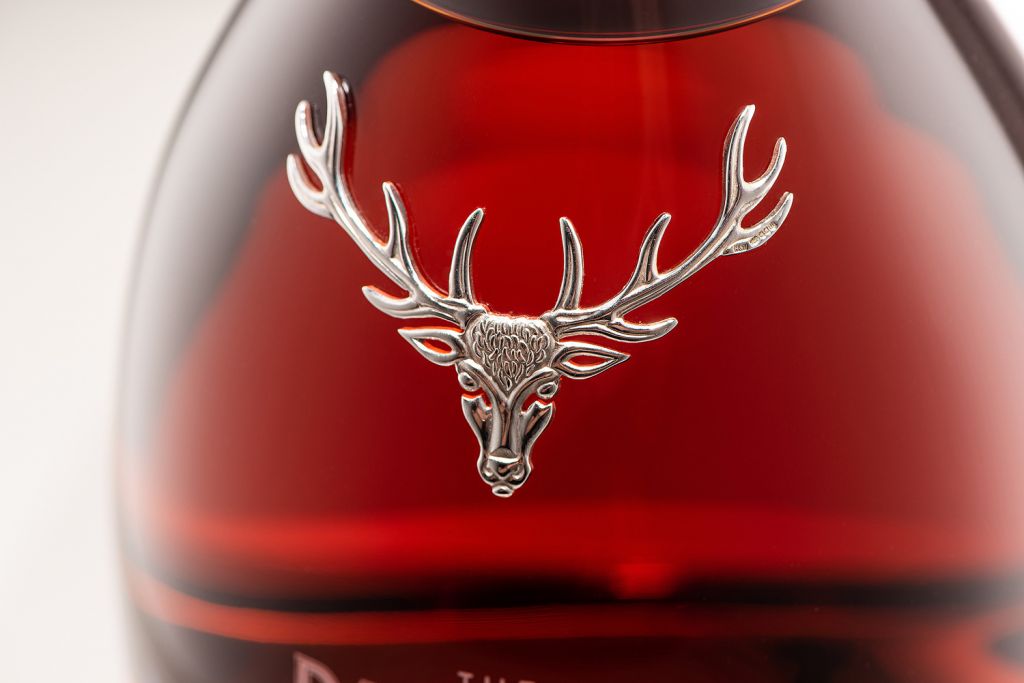 In fact, every decanter is cocooned in a hand-crafted high gloss coffret case made from black sycamore wood and features a cream diamond leather-patterned interior with a small strap to hold the bottle in situ. At the base is a gold plaque bearing the signature of Master Distiller Richard Patterson, the creator of this spectacular masterpiece.

The tasting of a £55,000 whisky
After an exquisite three-course meal in the company of fellow media, an award-winning author, VIP guests and whisky aficionados, it was time to sample 51 years of history for ourselves with the infectiously enthusiastic and passionate Richard Paterson, Master Distiller at The Dalmore for the last 50 years, a remarkable feat. 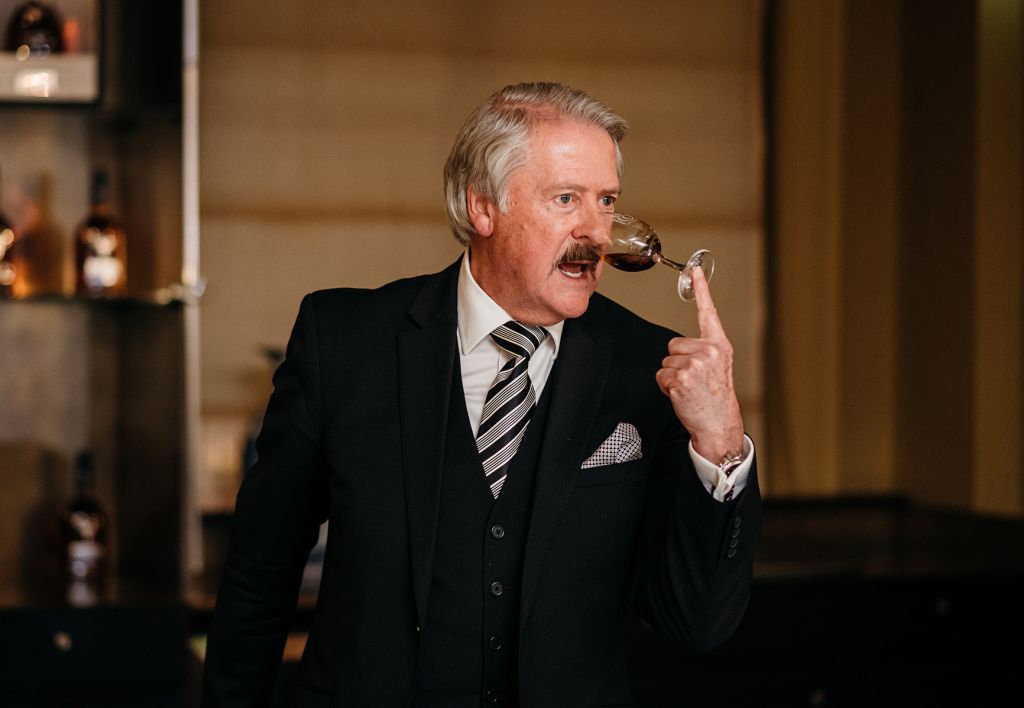 What strikes you first of all when peering at The Dalmore Aged 51 Years, is the rich mahogany gold colour, which has deep and intense copper highlights. Lifting our Dalmore 180-branded copita nosing glass towards our nostrils, we were asked to treat this ’51-year-old’ with the utmost respect and greet it with a “hallo”, and a “how are you?” as if it were a real person.

Taking the time to pass the tilted glass from one nostril to the other was crucial, so as to be able to appreciate the sheer value of what you had in your hand. After all, this is not something that you do every day. 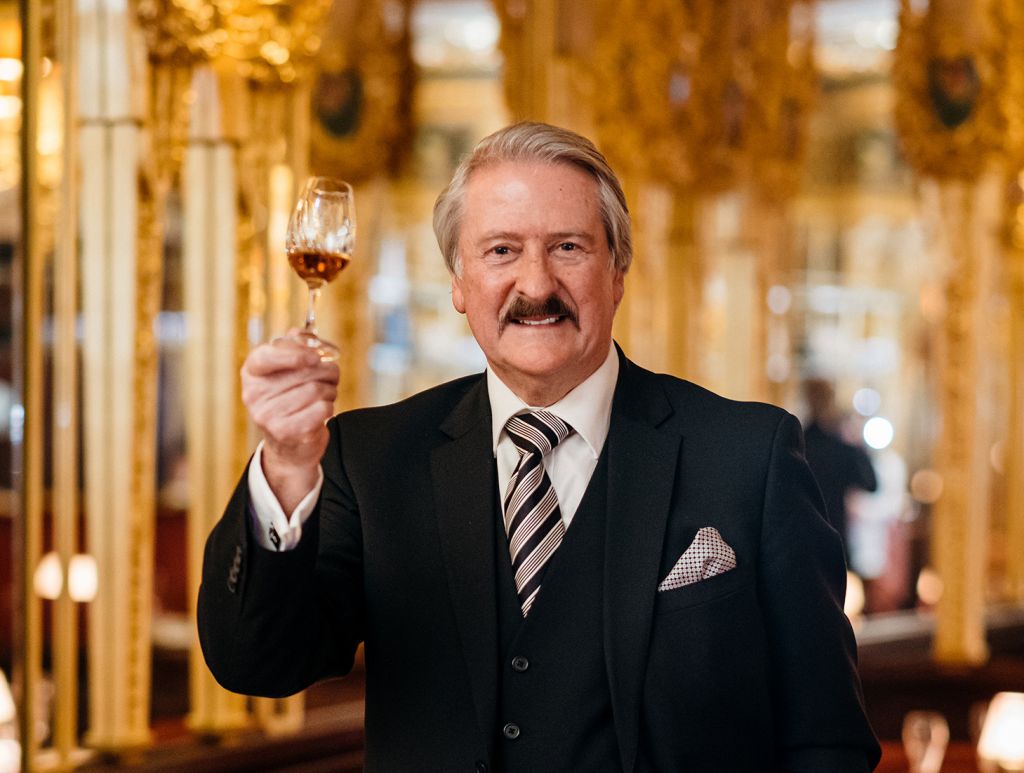 We were then guided to peer at the soft and elegant whisky and see the modern balsamic and liquorice, which tells you that there is an aged element. Old English marmalade was also an important aspect of this spirit, as orange runs through the DNA of The Dalmore. Black Morello cherries, cassis and Turkish Delight were also words being championed by Richard whilst we stared at half a century of utter genius.

Contrary to what you may think when you are savouring such an expensive whisky, Richard asked us to take a big mouthful, and go from the top of the tongue to the bottom and back again, all without swallowing it within the allotted time of 51 seconds. What he wanted us to do here was to be captured in the moment, as this was a taste of pure luxury and a unique experience that will disappear forever once all 51 bottles have been emptied. 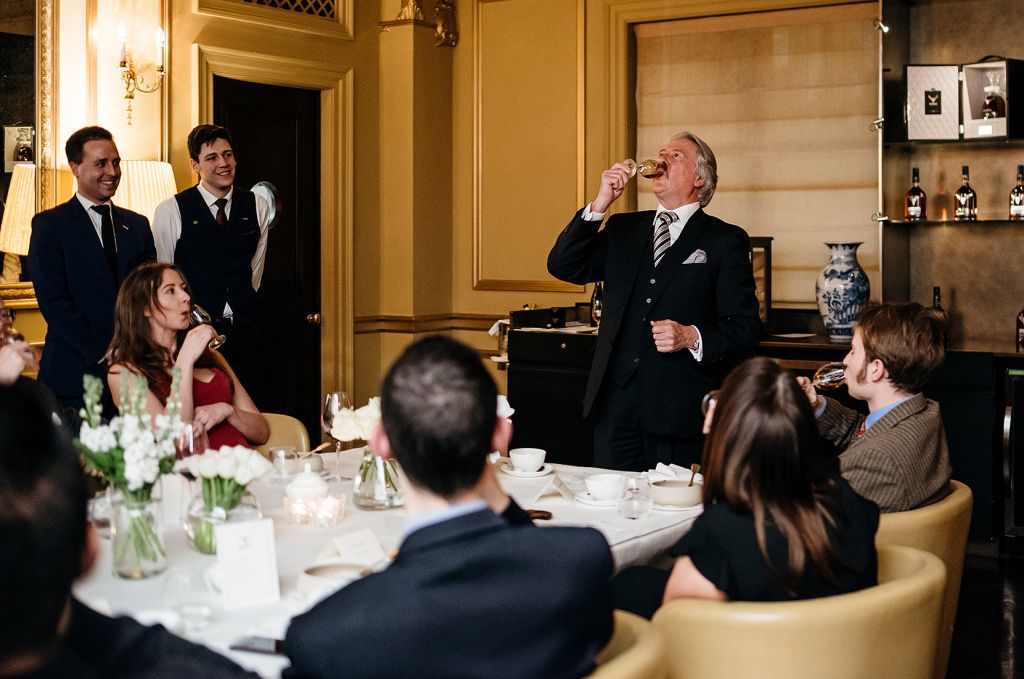 Not only were the aromas a true delight, but having this treasure chest of pure liquid gold on your palate was a privilege, and for an introduction to The Dalmore distillery, there was no better place to start than with this exquisite 51-Year-Old. This was a big tick off the bucket list and an occasion that will stay with me for a very long time. Slàinte!

The Dalmore Aged 51 Years – Where and How?

The Dalmore Aged 51 Years (ABV 40%) is available to purchase from selected stores and travel retail outlets across the globe with a suggested RRP of £55,000 per bottle. For more information, please visit www.thedalmore.com.

Take a look at the Luxurious Magazine Instagram page for more images of the unveiling of The Dalmore Aged 51 Years single malt whisky.

Photo credit: The Dalmore / Till Britze.