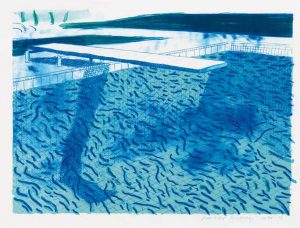 Christie’s have announce full details of the long-awaited HOCKNEY ON PAPER sale, which will take place on Friday 17 February. Featuring 147 works including etchings, lithographs, drawings and photography by David Hockney (b.1937), it is expected to realise in excess of £1 million. The sale spans over forty years of the artist’s career and includes works which reflect Hockney’s various incarnations: the precocious student, the young émigré in California, the Hollywood pool-sider and chronicler of gay life, the portraitist, the fax-artist, the collagist photographer, the set designer and the camera obscura provocateur.

One of the earliest and rarest works to be offered is Self-portrait, 1954 (estimate: £15,000-20,000) which was completed when Hockney was just 17. Hockney made his first lithographs at the Bradford College of Art under the tutelage of Derek Stafford, who regarded the young artist as one of the most talented students he had ever taught and encouraged him to apply for a place at the Royal College of Art. At the time of this self-portrait, Hockney was a great admirer of the painter Stanley Spencer, so much so that he modelled 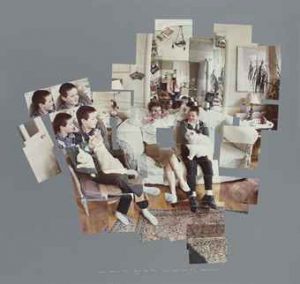 his appearance on the older artist: cutting his hair in a fringe and donning Spencer-esque prescription glasses. Other lots from Hockney’s early years include several works inspired by his home town which the artist created as an art student in Bradford. Fish and Chip Shop, 1954 (estimate: £7,000-9,000) depicts Hockney’s local ‘chippie’ and its proprietors, who were friends of the Hockney family. It wonderfully evokes this familiar and quintessentially British culinary institution.

Between 1959 and 1962 Hockney attended the Royal College of Art; a number of works from this period are included in the sale such as The Diploma, 1962 (estimate: £6,000-8,000). In his final year at the RCA, Hockney courted controversy by refusing to write the essay required for the final examination. Resisting the necessity for art students to have to explain themselves with texts, he argued instead that he should be assessed solely on his painting. When threatened with not being allowed to graduate, the artist etched his own diploma, wittily lambasting the academic establishment. In recognition of his talent and already growing reputation the RCA changed its regulations and Hockney was granted a diploma. Alongside etchings from this time is a drawing which depicts his recollection of the day Marilyn Monroe died, 5 August 1962. Viareggio (estimate: £12,000-18,000) shows a newspaper vendor with the name of the French daily newspaper France Soir emblazoned on his vest. His red heart has started to smoulder and whisps of smoke rise up above his head; a metaphor for the passionate grief aroused around the world by the news of the celebrity’s untimely death.

AMERICA & AFTER:
On 9 July 1961, his twenty-fourth birthday, Hockney boarded a plane to New York. It was his first visit to America, made possible by winning Robert Erskine’s annual printmaking award of £100. He was taken by the energy and vibrancy of the city. When Hockney returned to London in September 1961, sporting bleached blonde hair and a crew-cut, he embarked on a series of prints, a re-imagining of William Hogarth’s celebrated series A Rake’s Progress, in which he cast himself as the anti-hero. A complete set of these sixteen etchings leads this sale (estimate: £150,000-200,000). Hockney visited Los Angeles for the first time in 1963, and was entranced with its bright sunshine, modernist homes, ubiquitous lawns and swimming pools, this suburban landscape represented an idyllic way of life for Hockney, worlds away from Bradford and London. Images of these LA landscapes became a recurring theme and can be seen in the drawing Los Angeles (estimate: £20,000-30,000) and Lithograph of Water made of thick and thin Lines and two light blue Washes (POOL #1E) (estimate: £25,000-35,000).

PHOTOGRAPHY & DIGITAL MEDIA:
From the late 1960s to the early 1980s Hockney used photography extensively as a visual diary, recording his friends and companions, and his travels around the world. A number of his striking photomontages, such as Canal and Road, Kyoto Feb. 19, 1983 (estimate: £18,000-22,000, illustrated left), are on offer in this sale and illustrate the multidimensionality of David Hockney. This auction offers the opportunity to both witness and acquire works from every stage of David Hockney’s career; from his early etchings and lithographs to the more unique prints and works on paper, Britain’s greatest living artist is represented in all his guises.