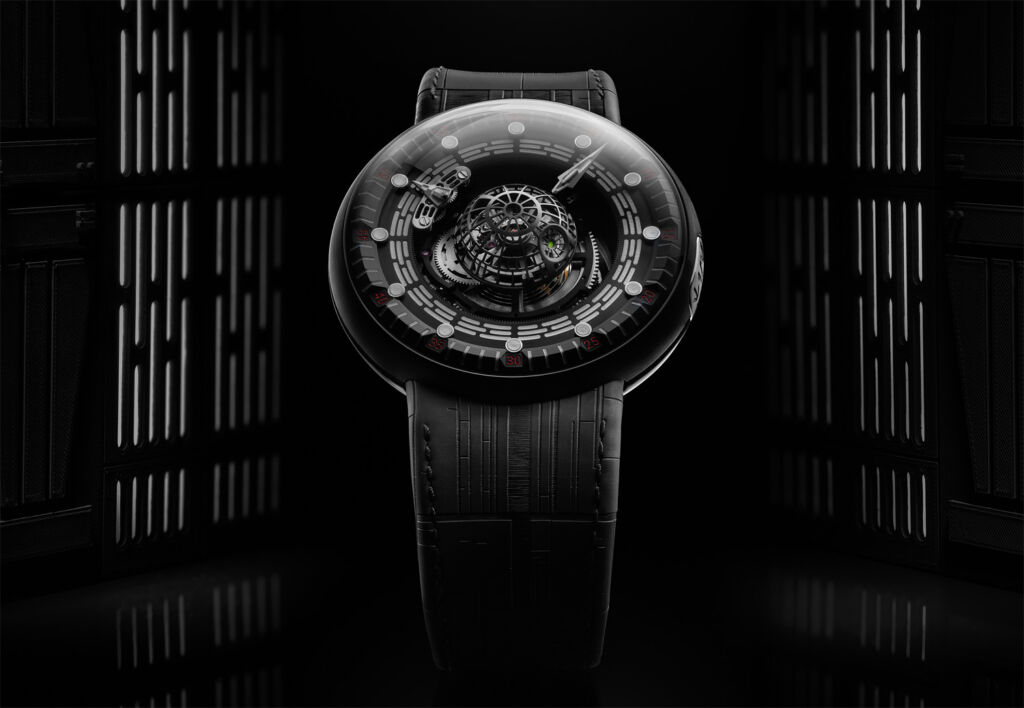 It’s often said that a timepiece is a reflection of the wearer’s personality. Hopefully, there is some flexibility in that as the Death Star Ultimate Collector Set set from Kross Studio is heavily influenced by the dark side!

As the owner of Luxurious Magazine, I feel there’s little that can take me by surprise, and it takes an awful lot for the word ‘Blimey’ to spout forth from my lips. However, from time to time, I get to see something that goes entirely against the grain, bringing forth that magical word with gusto!

So what was it that was so tremendous that it caused my pulse to quicken? It was the incredible Death Star Ultimate Collector Set from Kross Studio.

Before we move forward; If you’ve looked at the first image in this feature and already said to yourself, “I want one”, you need to know that the set is only available in a very limited quantity. Only ten numbered examples of the Death Star Ultimate Collector Set will be made available. So, you’ll need to be armed with a hefty bank balance and be quick if you want to get your hands on one! 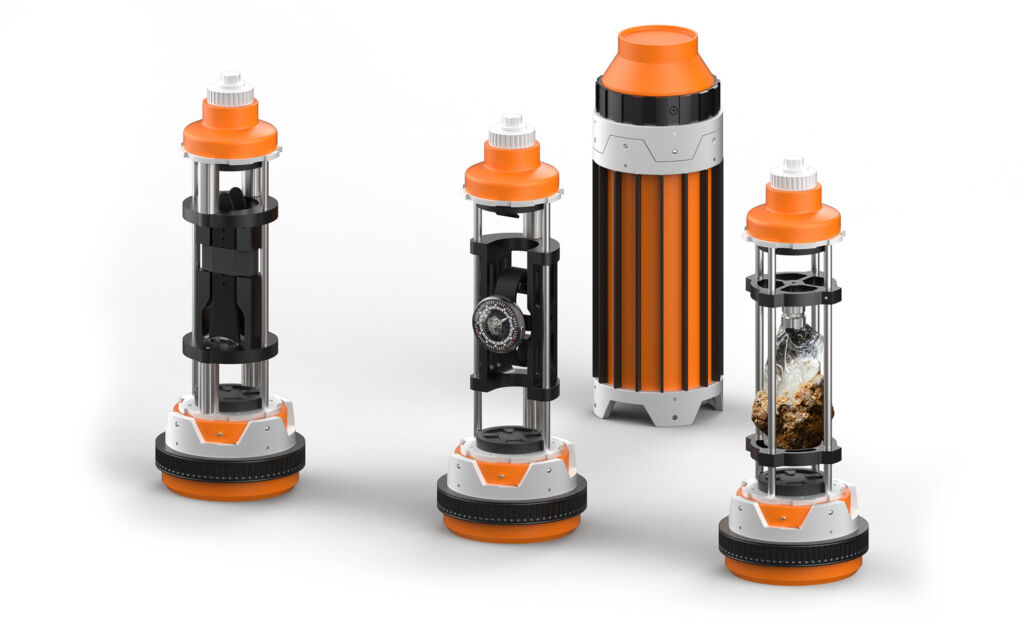 What’s inside the Death Star Ultimate Collector Set?
Each set contains a Death Star™-inspired Tourbillon watch crafted to the most exemplary Swiss design and engineering standards. Also included is an authentic kyber crystal movie prop from the film Rogue One: A Star Wars Story that comes in a richly detailed Imperial kyber crystal container that measures more than three feet long!

One of the main reasons this set will be of huge interest to fans of the franchise and Star Wars collectors is it’s the first time that an authentic kyber crystal prop has been made available to the general public, and the crystal’s container in the collection is faithful to the one seen in the movie franchise. 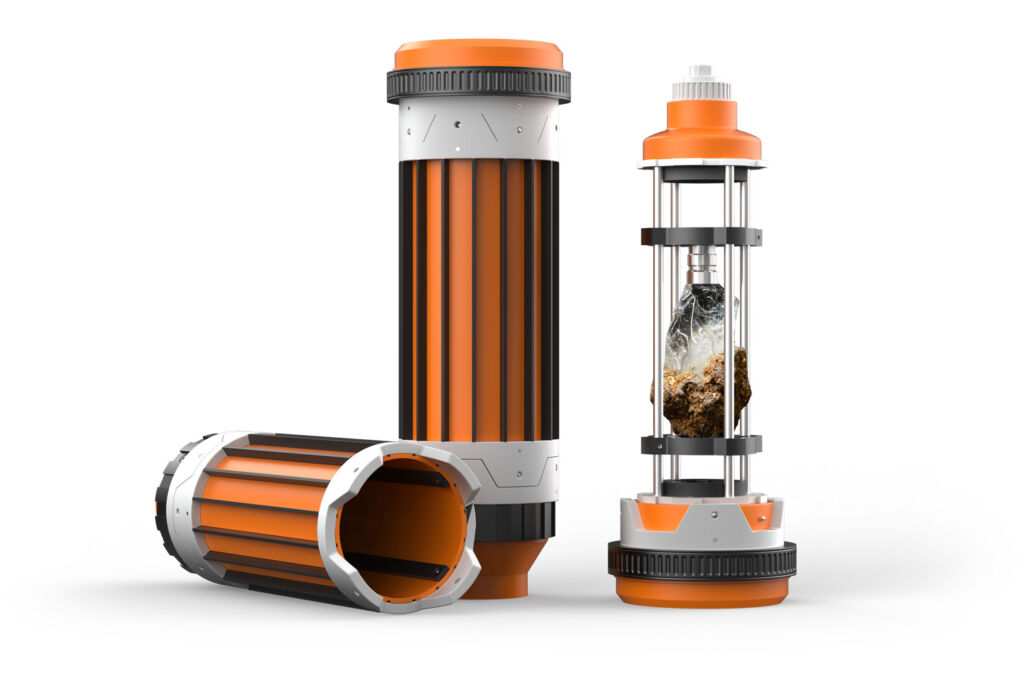 In the movie, the crystals were transported in and stored in armoured crates; the official reproductions in the set were made with the same exacting detail and constructed using wood and aluminium.

Just the containers alone needed an incredible 700 parts to make, and they are scaled-down, half-sized versions of the ones seen in the original film. Each container was painted and assembled by hand, which has resulted in a stunning piece of art measuring 1.20 meters in length. 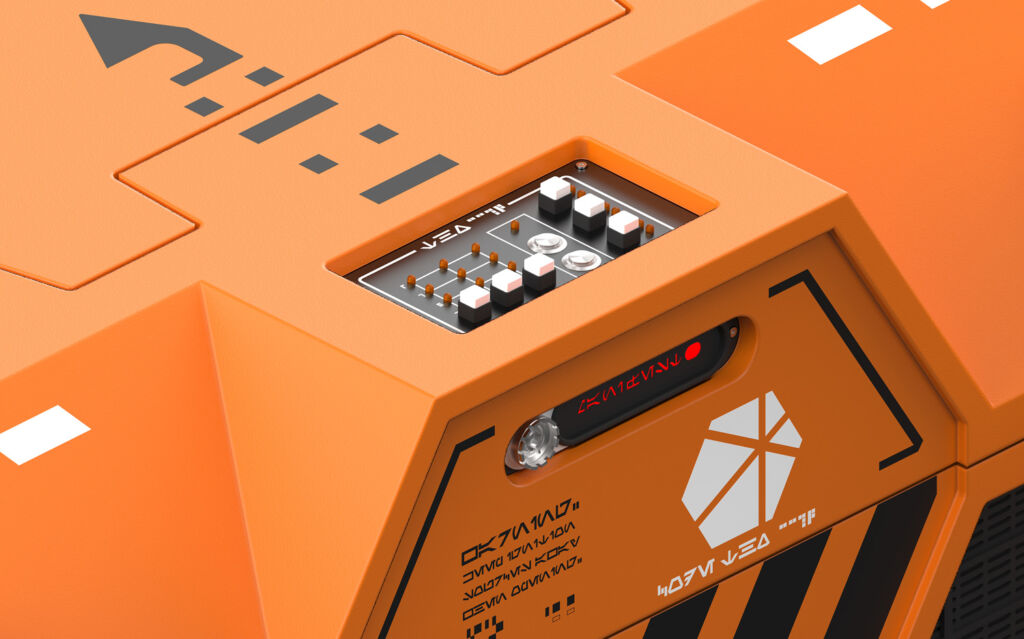 Every aspect of the original has been conceptualised. As you would expect from a company with design running through its DNA, the Death Star Ultimate Collector Set includes amazing attention to detail that takes anyone who sees any part of it into the Star Wars galaxy.

A great example of this is the electronic control panel to the backlit manifest panel (above) inscribed in Aurebesh script; an alphabet used widely in the Star Wars galaxy. 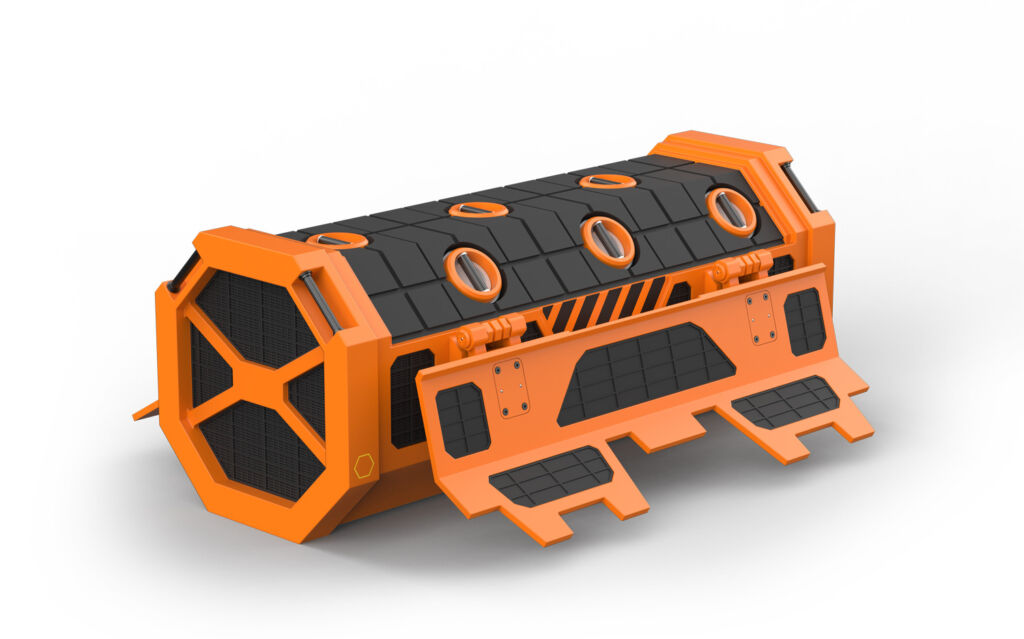 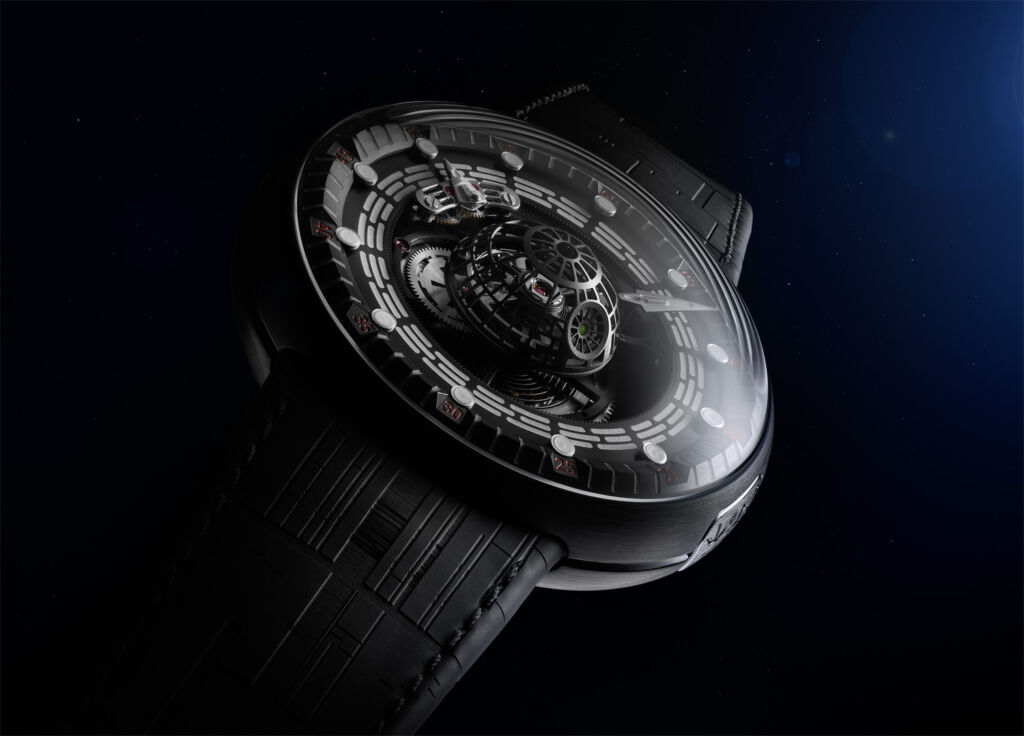 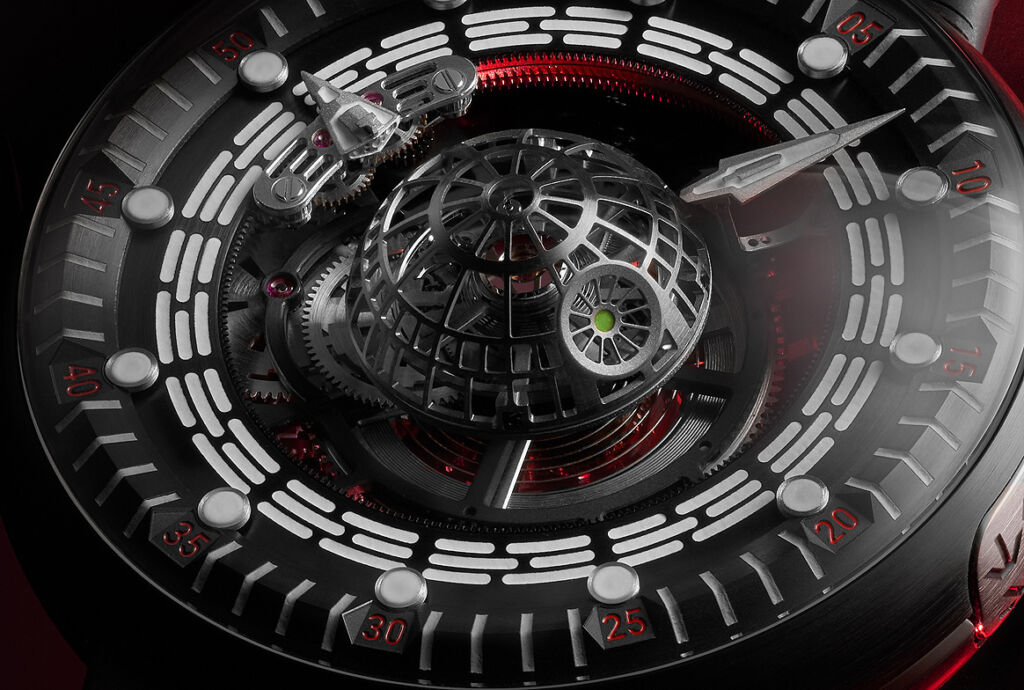 The watch itself contains a whole host of innovations, including an in-house developed winding movement with a five-day power reserve. A look at the images shows how much craftsmanship and passion that went into developing this incredible timepiece.

The hands are attached to a peripheral display that orbits around the tourbillon, and the crown boasts an inset push-button system as opposed to a traditional crown.

Another great feature of this timepiece is the D-ring on the back of the piece, used for winding the watch. When not in use, it stows away out of sight to maintain the timepiece’s sleek look.

The clean lines are also maintained by cleverly hiding quick-release buttons on the underside of the case. The buttons let owners quickly and simply change from the calfskin leather strap to one of the two additional rubber straps. 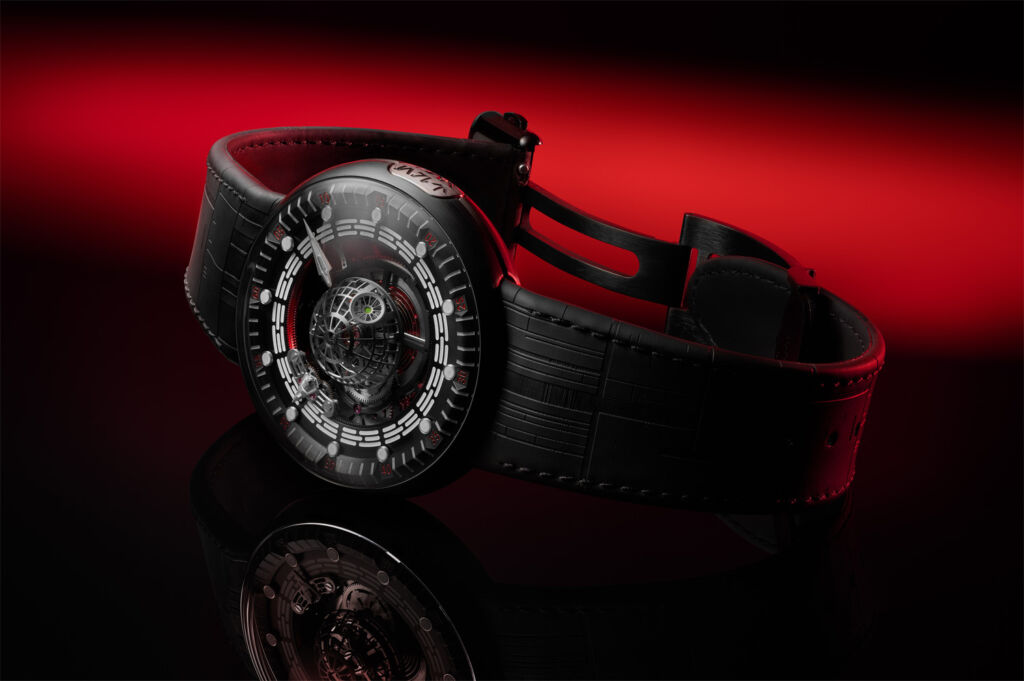 The tourbillon is a beautifully designed piece jam-packed with Star Wars iconography. Wherever you look, you’ll find references to Star Wars, such as the Aurebesh script engraved on the push-button and the esthetic Galactic Empire emblem.

A final nice Star Wars-themed touch can be found on the fixed hours’ wheel, which is filled with white Super-LumiNova “blue emission”, which fans of the movies will remember from the lighting halls in the Imperial vessels.

As we mentioned earlier, only ten Death Star Ultimate Collector Sets will ever be produced and each one is priced at US$150,000. Kross Studio has stated that this collection is just the first of what will be many more Star Wars inspired products. If this collection is currently beyond your means, hold fire and keep an eye on their website, you never know what might be coming in the near future.