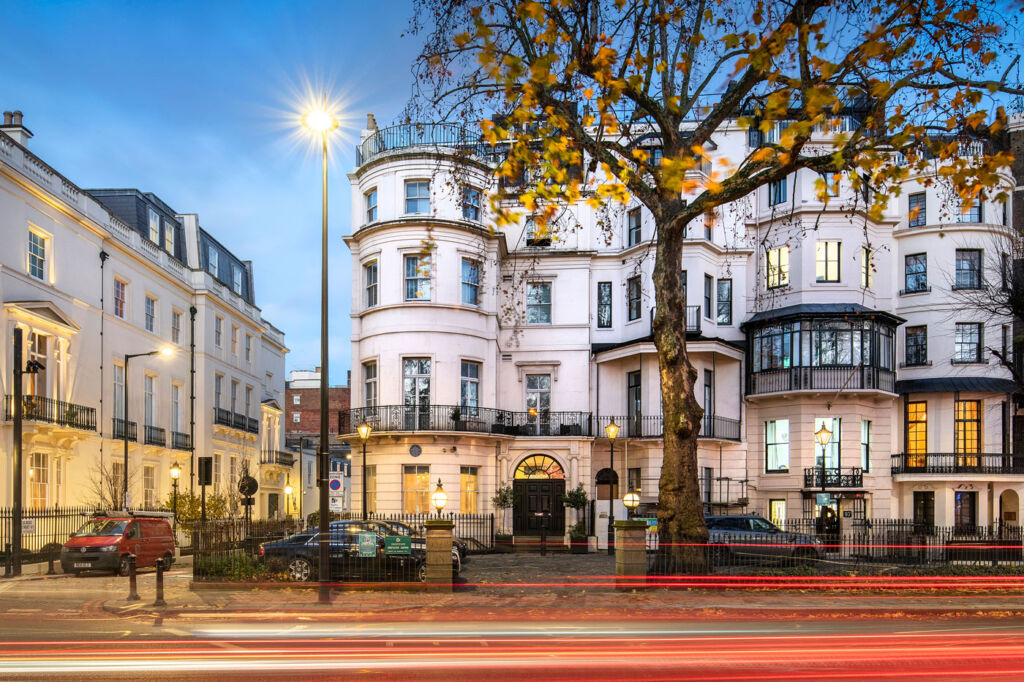 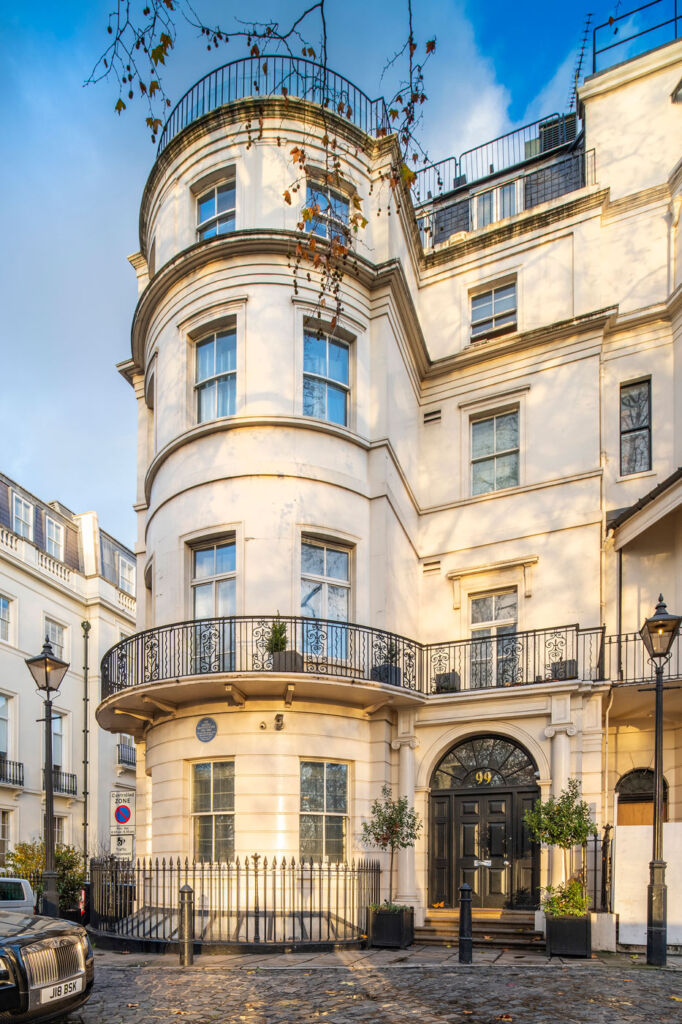 The Grade II listed corner stucco fronted property was designed by architect John Goldicutt and built in 1823-5 by Thomas Martin, the builder of Portman Square, with a bowed façade, grand rooms, tall doors, architraves, and high ceilings. It is one of just a few surviving Georgian properties on Park Lane.

The first resident at 99 Park Lane was stockbroker Sir Moses Montefiore (1784-1885) who lived there between 1826-1885. Guests included his brother-in-law Nathan Rothschild, the banking tycoon, and politician Charles Henry Churchill. On the front façade, a Blue Plaque marks Montefiore’s sixty years at the property.

The second resident was Countess Grosvenor, widow of Victor, Earl Grosvenor, and her second husband statesman George Wyndham. It also served as the childhood home of the second Duke of Westminster, with the Grosvenor family living at 99 Park Lane between 1887-1913.

In 1934 99 Park Lane was rented by Grosvenor to Hollywood legend Douglas Fairbanks Jr. (1909-2000), who needed a London base while he was working with Alexander Korda at the Denham Film Studios. Fairbanks Jr. had relocated from Los Angeles because Warner Bros. had asked all its Hollywood stars to take a 50% pay cut due to the Great Depression; Fairbanks Jr. had refused and went to Denham working on films including The Rise of Catherine the Great (1934) and Mimi (1935).

In 1936 Douglas Fairbanks Sr. introduced his son to Lord Louis Mountbatten who also lived in Mayfair, and Fairbanks Jr. and Mountbatten became friends, socialising at the Grosvenor House Hotel on Park Lane and nearby Claridges.

In the same year, Douglas and Mary purchased a lease on 99 Park Lane to serve as their London residence. The couple had a Hollywood-style swimming pool and health spa installed on the lower ground floor, one of the first swimming pools to be built in a private home in Mayfair.

Between 1939-1941 Fairbanks Jr. became a member of the British War Relief Association and even during 1940 the movie-star stayed at 99 Park Lane and partied at adjacent Grosvenor House Hotel, protected by sandbags and blackout material covering windows. At the height of the Blitz, he, David Niven and show-girls famously went on pub crawls, cruising around the West End during the blackouts. 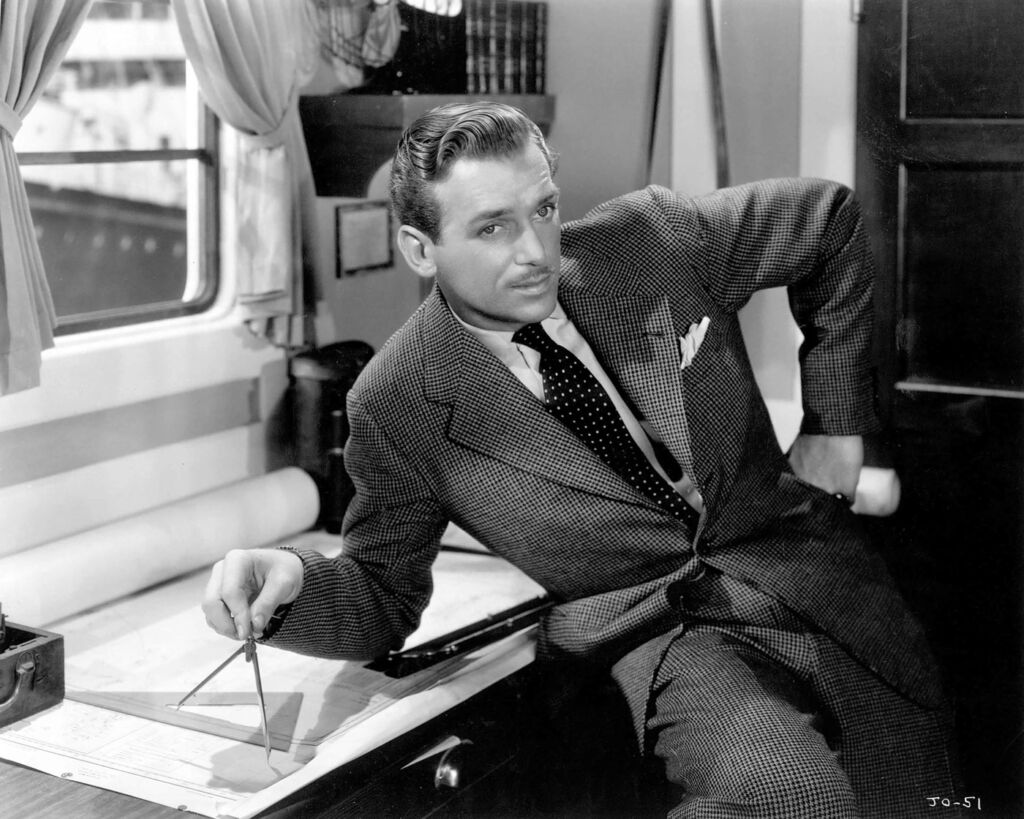 After WWII Douglas Fairbanks Jr., a confirmed Anglophile, was given an Honorary Knighthood and gave up the lease on 99 Park Lane, acquiring another London home at No.8 The Boltons in Kensington where he and Mary lived until 1973, before retiring to Palm Beach, Florida.

Fast forward to today and the maisonette at 99 Park Lane has been significantly modernised and altered since the days of Douglas Fairbanks Jr., however, there are still features that serve as a reminder of those movie-star years during the 1930s and 1940s.

The entertaining rooms are on one floor, with the bedroom suites and health spa on the other. The maisonette has a spacious marble-floored entrance hall which doubles as a family room. The entrance hall leads into the grand main drawing room which has Oak timber flooring, a 12ft-high ceiling with original Grecian cornice and ceiling mouldings; and a bay with three tall windows offering views over Hyde Park.

At one end of the drawing room is a cocktail bar finished in backlit Onyx and bespoke joinery; it is in this grand saloon that Montefiore entertained the Rothschilds and Churchills and during the 1930s/1940s and where Douglas Fairbanks Jr. served cocktails to guests such as Laurence Olivier, Noel Coward and David Niven.

The marble-floored 8-seater dining room has floor-to-ceiling antique-finish mirrors providing the perfect venue for family dining or formal entertaining. The fully fitted family kitchen has stone flooring, silver-grey units, Miele appliances and stone worktops. There is also a TV room, with a skylight above, which opens onto an outside terrace.

On the other floor is the health spa which has a pool room with 14ft swimming pool and Jacuzzi, with a drop-down cinema/TV screen and decks for lounging/relaxation. It is here that Douglas Fairbanks Jr. partied with Gertrude Lawrence and Margaret Sweeny, who became the Duchess of Argyll. The spa is complete with a gymnasium, sauna and toilet.

The master bedroom suite has a walk-in dressing room lined with bespoke-design built-in wardrobes and an Onyx and marble-clad master bathroom with a triple-sized walk-in shower. There are three further bedroom suites, each with ensuites, on this floor along with an outside terrace/lightwell.

Peter Wetherell, Chief Executive of Wetherell says: “With its iconic Park Lane address and Hyde Park views, this expansive Mayfair residence has been home to banking tycoon Sir Moses Montefiore, the Grosvenor family, and Hollywood legend Douglas Fairbanks Jr. Guests have included Rothschilds, Churchills and movie A-listers including Noel Coward, Rex Harrison and David Niven. This is Park Lane’s only maisonette with the benefit of a private swimming pool and spa, its own carriage driveway and private off-street parking. Wetherell believe that it is one of the most interesting and special lettings opportunities in Mayfair at present.”

Park Lane is a 0.7 mile (1.1km) road running from Hyde Park Corner to Marble Arch, overlooking the 350 acres of Hyde Park. It was created by King Henry VIII when he enclosed the borders of Hyde Park in the early 16th Century.

The first houses were built along Park Lane in the 1720s, and it became the address of choice for the aristocracy providing townhouses for the Dukes of Westminster, Dukes of Somerset, the Earls of Balcarres, the Earls of Holdernesse, Earls of Rosebery and Viscount Castlereagh.

During the Victorian era, Park Lane became popular with industrial and financial tycoons and between 1822-1832 a series of grand mansions and vast private palaces were built along the thoroughfare.

The Great War and the Wall Street Crash led to virtually all the Park Lane mansions being demolished and replaced by apartment buildings between 1927 and 1935. The 1920s and 1930s apartment buildings and 5-star hotels along Park Lane have remained the London address of choice for the rich and famous. Fred Astaire, Somerset Maugham, Cecil Day-Lewis, Elizabeth Taylor, Mohammed Al Fayed and Anna Neagle have all kept luxury flats or suites on Park Lane.

99 Park Lane is available to let fully furnished for £11,500 per week, plus fees. People interested in living at 99 Park Lane should contact sole agent Wetherell on 020 7529 5588 or visit www.wetherell.co.uk