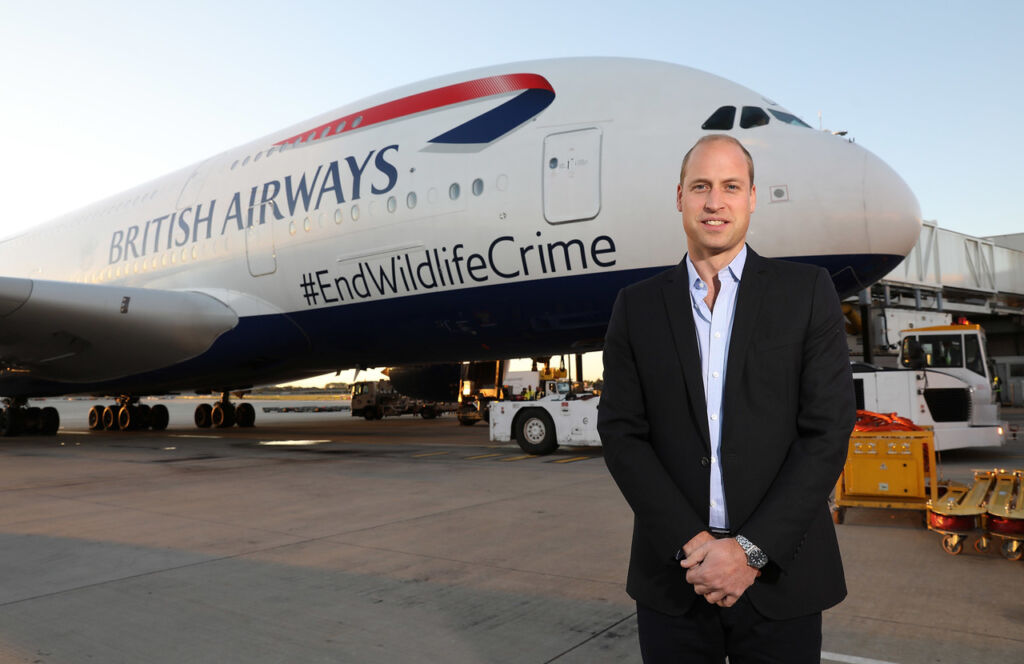 HRH The Duke of Cambridge heads to Africa to kick off a mission to highlight the urgent global threat to wildlife and people from the illegal wildlife trade.

Prince William will be undertaking a working trip to Namibia, Tanzania and Kenya. There he will be visiting a range of projects and meeting with conservationists, communities and law enforcement representatives working to halt poaching and illegal wildlife trade.

Speaking recently at an event at the Royal African Society, The Duke of Cambridge said: “Like so many others, I am deeply saddened by the numbers of elephant, rhino and pangolin who have been illegally slaughtered for their tusks, horns and scales. But the illegal wildlife trade also has a devastating human impact.

“Too many brave rangers are tragically killed each year by poachers. Communities see their tourist livelihoods threatened. And the proceeds of the illegal wildlife trade fund broader criminal networks and threaten security.

“This is why I am committed to doing what I can to help end this terrible, global crime. This will be a particular focus of my upcoming visit to Africa, and of course the conference on the illegal wildlife trade taking place here in London in October.”

The party is being flown by British Airways, a longstanding supporter of Tusk and a member of The Duke’s United for Wildlife Transport Taskforce.

Alex Cruz, British Airways’ Chairman and CEO said: “We are proud to stand together with His Royal Highness the Duke of Cambridge, Tusk Trust and United for Wildlife in supporting this important mission to help send a very clear message on the need to fight wildlife crime. Airlines have an important part to play in preventing illegal wildlife trafficking and we will continue to help lead the campaign within the travel industry.”

The Duke of Cambridge is being accompanied by Charlie Mayhew MBE, CEO of Tusk Trust – the conservation charity of which he has been Royal Patron since 2005 and Naomi Doak, the Head of Conservation Programmes at The Royal Foundation where The Duke’s United for Wildlife is based.

Illegal wildlife trade is estimated to be the fourth most lucrative international crime after drugs, arms and human trafficking. Worth as much as £17 billion per year, the trade not only threatens some of the world’s most iconic species but also damages sustainable economic growth and the livelihoods of vulnerable people in rural communities.

Products from elephant, rhino, pangolin and tiger are amongst the most highly valued products traded, and are often trafficked via established international transport networks. Criminals also use networks of corrupt officials and agencies to undermine sustainable development and the law, damaging the livelihoods and growth of local communities.

Charlie Mayhew MBE, CEO Tusk said: “Tusk is proud to host Prince William on this important trip to underline the urgent threat to wildlife from the illegal wildlife trade. We look forward to showing our Royal Patron Tusk’s vital conservation programmes on the ground in Namibia and Tanzania as we work to secure a future for Africa’s wildlife. We are incredibly grateful to British Airways for their generous and continued support for Tusk – a relationship forged 25 years ago. We’re particularly pleased to see the #endwildlifecrime call to arms included on the aircraft’s livery – an evident commitment from British Airways to join in the fight to end international wildlife crime.”

Lord Hague, Chairman of the United for Wildlife Transport Taskforce, said: “As Chairman of the United for Wildlife Transport Taskforce I have witnessed how instrumental the air transport sector has been in tackling the illegal wildlife trade. Their efforts to raise awareness in both staff and passengers has played a vital role in disrupting illegal wildlife networks. As His Royal Highness the Duke of Cambridge departs for Africa I am pleased to see a key member of the Transport Taskforce, British Airways, add their powerful and influential voice to this important issue.”

For almost thirty years, Tusk has pioneered successful conservation action in Africa, supporting local partners and communities on the ground with over £40 million of investment.

About United for Wildlife

United for Wildlife works to tackle illegal wildlife trade by bringing together conservation organisations, governments, and global corporations. Led by The Duke of Cambridge and The Royal Foundation, United for Wildlife is working to protect endangered species like elephants, rhinos, tigers and pangolins so they can share our world with future generations. Together we: Support new and innovative ways to protect animals against poachers, Combine forces to crack down on trafficking, and Change global mindsets and reduce demand.

To learn more about the work of United for Wildlife click here.