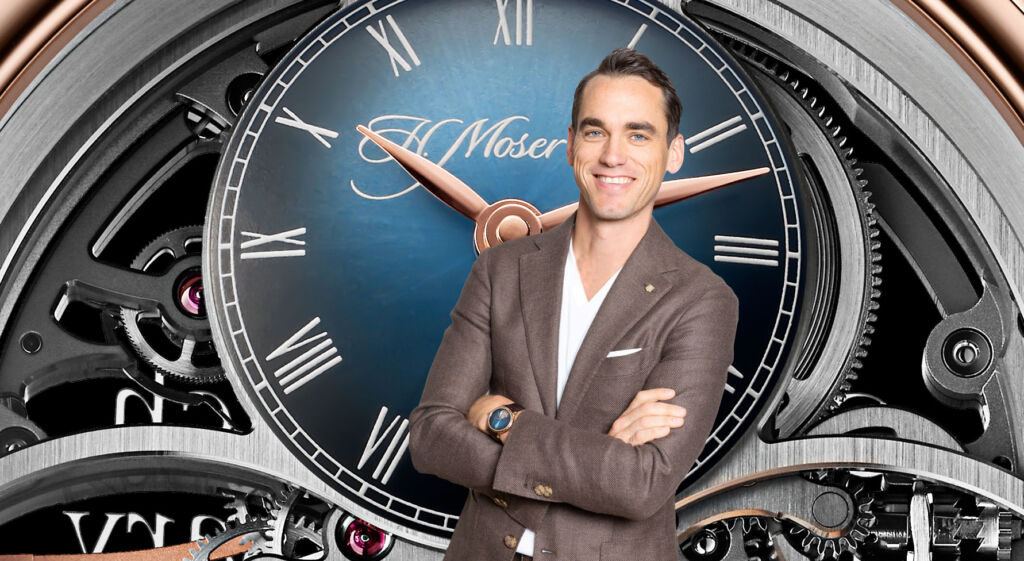 With a Master in Engineering from École Polytechnique fédérale de Lausanne (EPFL) and armed with an MBA from the Wharton Business School in Philadelphia, Edouard Meylan has all the academic prerequisites for him to lead independent Swiss luxury watchmaker H. Moser & Cie as the CEO. Born into a family that’s been in the watchmaking industry for generations, his father, Georges-Henri Meylan, was the former CEO of venerated Swiss watch brand Audemars Piguet. 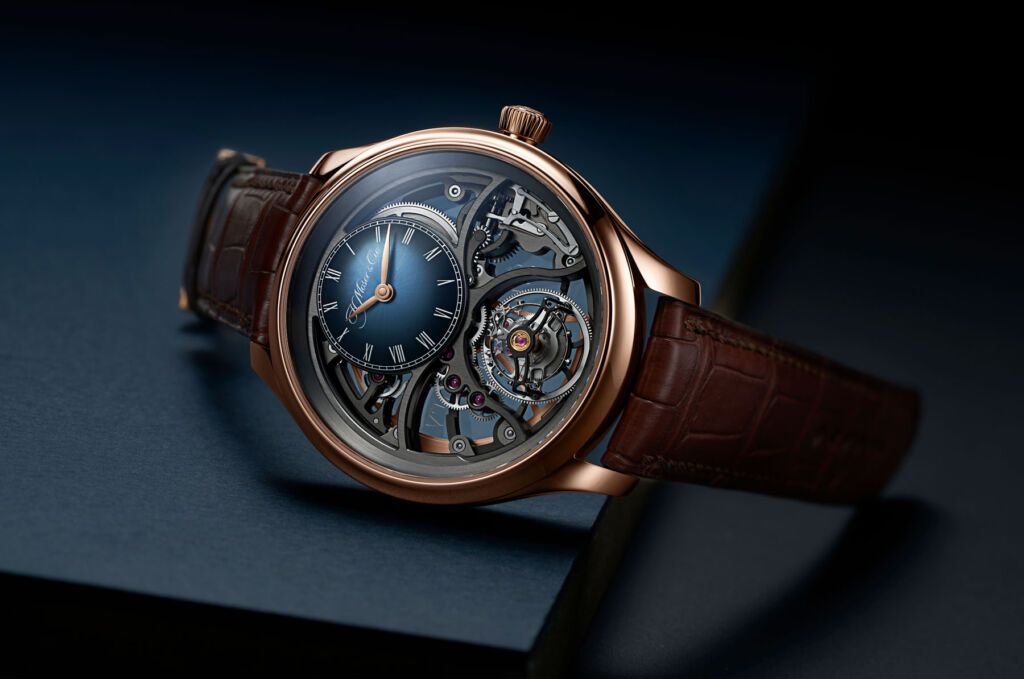 On a recent visit to Kuala Lumpur for the launch of H. Moser & Cie’s special limited edition timepiece to mark Cortina Watch’s 50th Anniversary, Meylan reveals that that business has never been better for his company and that the luxury watch industry is experiencing its golden years.

“It’s definitely the beginning of a cycle for the independent watch brands,” he discloses. “The demand for luxury watches has never been so high.”

How come? “It’s partly because of revenge spending and also because a lot of people discovered watchmaking during the time they were locked in while looking at their phones,” Meylan explains. “Prices started to go up in the secondary market, and people began to look at watches as a good investment. The word spread, and this created strong demand.”

But like anything else, this boom comes with a caveat. “We have to be careful as it might not be like this forever,” he cautions. And does his company plan to increase production to meet this surging demand? “We should never meet our demand. If everybody can get their hands on a Moser watch, then our brand loses its cachet,” he says. “Our sales grew by 20 per cent in 2020, but we only plan to increase our production to 3,000 watches a year. Because we are integrated, it makes it difficult for us to grow too fast.”

Seated in the corner of Cortina Watch’s new boutique in The Starhill, Meylan explains his connection with this respected name in watch retail. “We’ve had a long relationship with Cortina as I worked with Jeremy Lim (the current CEO of Cortina Holdings and the founder’s son) back in 2004 when I lived in Malaysia and worked in the Desco Group. But our families have known each other way before then,” Meylan says, alluding to the fact that his father knows and has done business with the founder of Cortina Watch, Anthony Lim, many decades ago.

“So we were very proud when Cortina Watch approached us last year and told us they were celebrating their 50th Anniversary in 2022 and wanted a special watch. So what did we do?” he asks rhetorically. 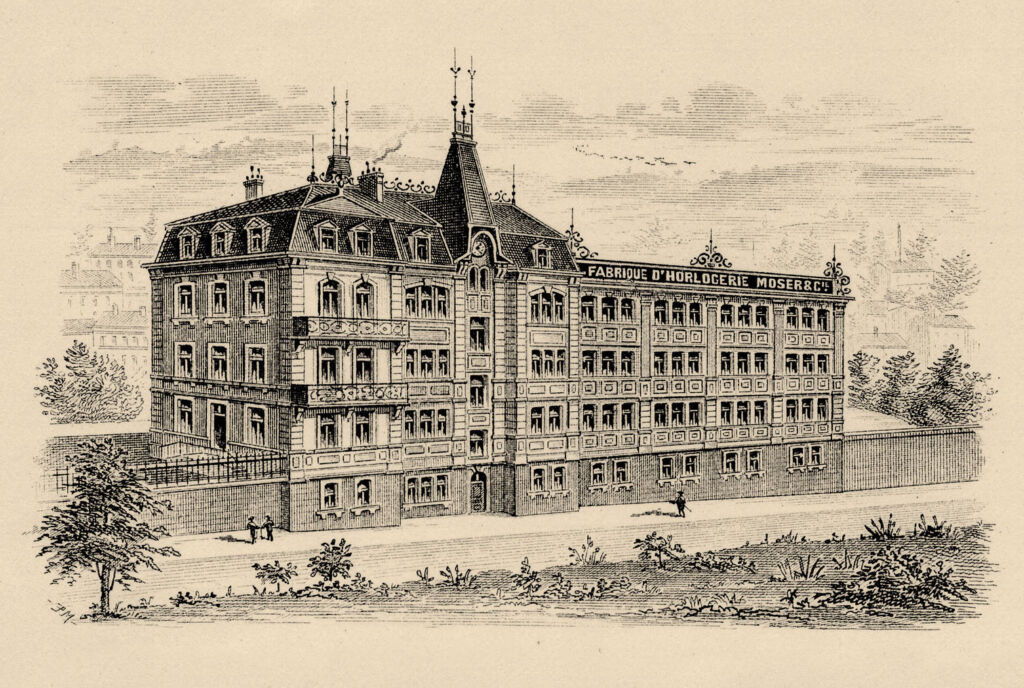 What H. Moser & Cie did was to take inspiration from the older Moser watches of 10 years ago and mixed it with the new Moser of today. The result is a one-off creation that not just symbolises the treasured partnership between H. Moser & Cie and Cortina Watch but also showcases the exceptional creativity and undisputed craftsmanship of this coveted Swiss watchmaker. “We took classic and elegant Endeavour collection and came up with the Cylindrical Tourbillon Skeleton, of which we made only ten pieces in rose gold.” 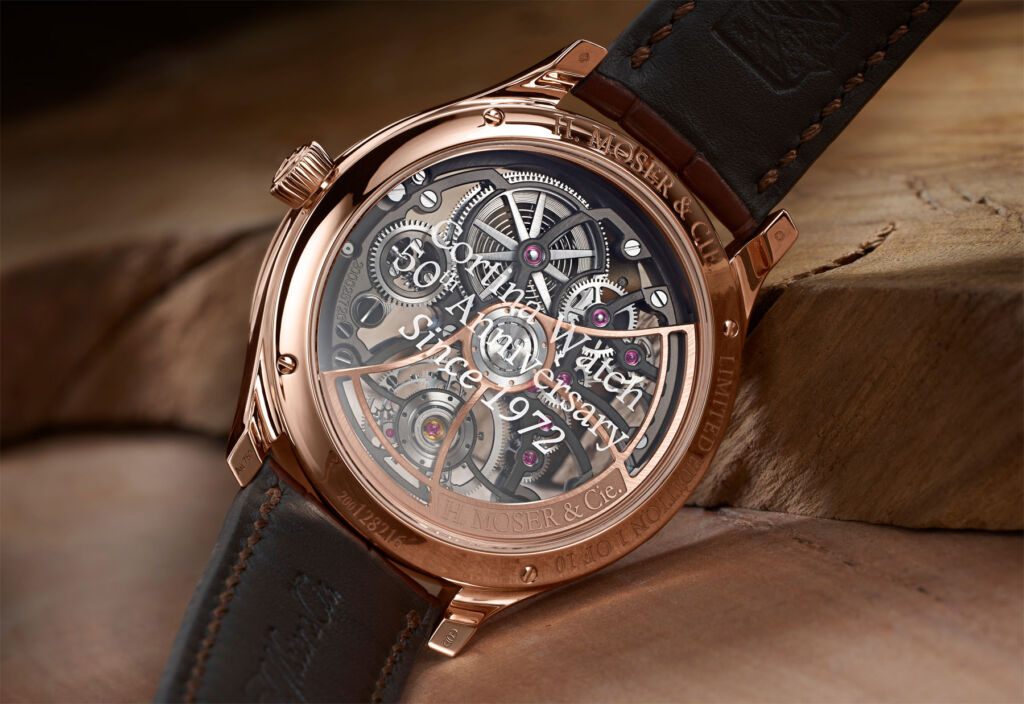 Examining this limited edition timepiece up close, it’s a sight to behold. Housed within the classical round case of the Endeavour, the domed sapphire crystal and the blue fume sub-dial complement the intricate skeletonised movement, the anthracite PVD finish, and the bridges with the luxurious brown alligator leather strap in harmony with the rose gold case. Behind the watch are inscribed the words “Cortina Watch 50th Anniversary Since 172” and the Limited Edition number. This unique piece already has a waiting list of longer than ten people. 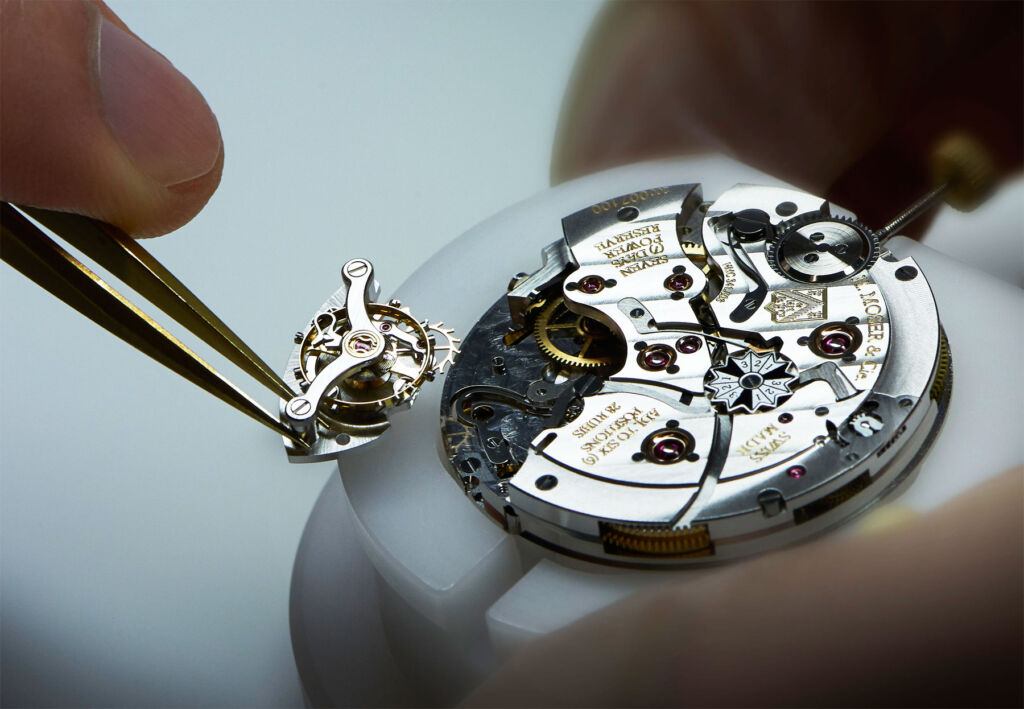 Taking about a year to complete, the H. Moser & Cie Endeavour Cylindrical Tourbillon Skeleton was initially greeted with scepticism and awe by the Cortina team when it was on the drawing board as they had never seen this movement before in a Moser watch. But now that it is finished, Meylan says Cortina told him Moser should have produced more!” 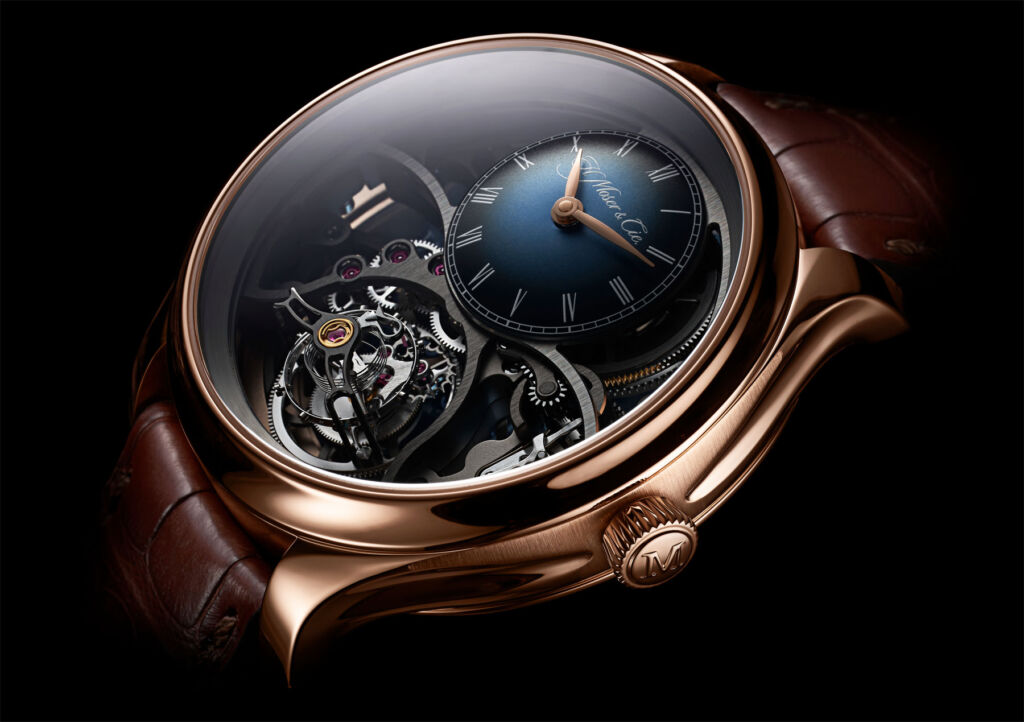 Sold exclusively in Cortina Watch stores in Singapore and Malaysia, this limited edition watch features a one-minute flying tourbillon equipped with a cylindrical hairspring which is made by H. Moser & Cie’s sister company. Unlike typical tourbillons, a cylindrical tourbillon beats in concentric motion and is orchestrated by the calibre HMC 811, a self-winding, three-dimensional Manufacture movement and has a minimum power reserve of74 hours.

Purchased in 2012 by the Meylan family, H. Moser & Cie began life in 1828 when it was created by Heinrich Moser, a young businessman who was born in Schaffhausen into a family of watchmakers. Extremely ambitious and entrepreneurial, Heinrich built a factory and employed hundreds of artisans in Switzerland, and it is estimated that he produced around 500,000 watches in his lifetime. 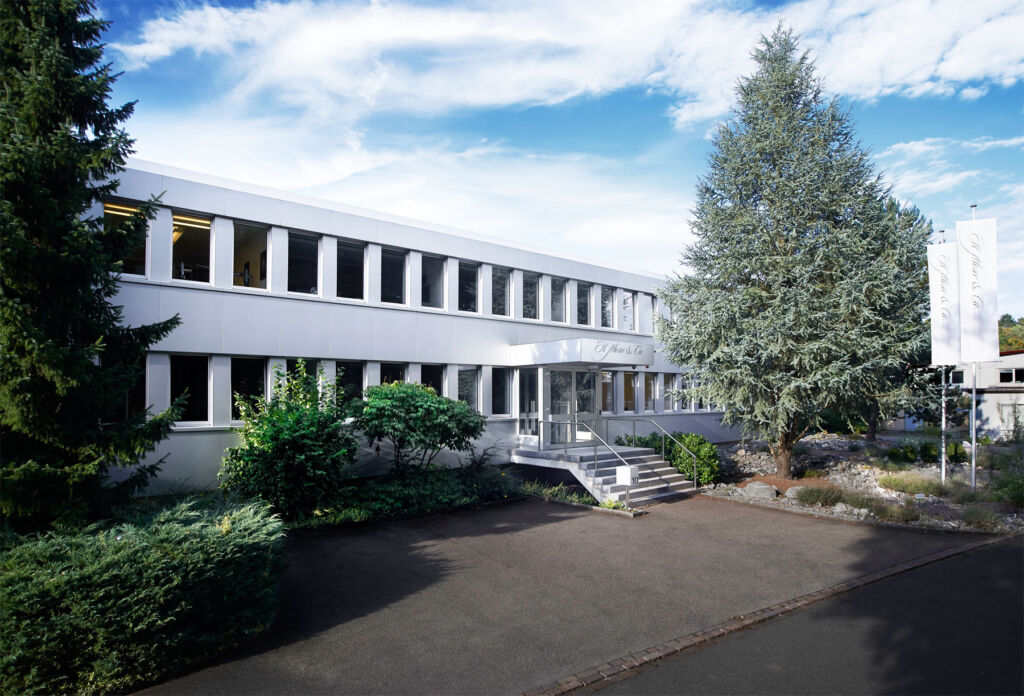 After being purchased by Edouard Meylan and his family, H. Moser & Cie underwent a renaissance of sorts, with Edouard moving the company into a profitable position. Today, the company maintains the same spirit of entrepreneurship as its original founder, employs about 60 people and produces 1,500 to 2,000 watches a year. Integrated into its production, most of the movements are developed and made in-house. 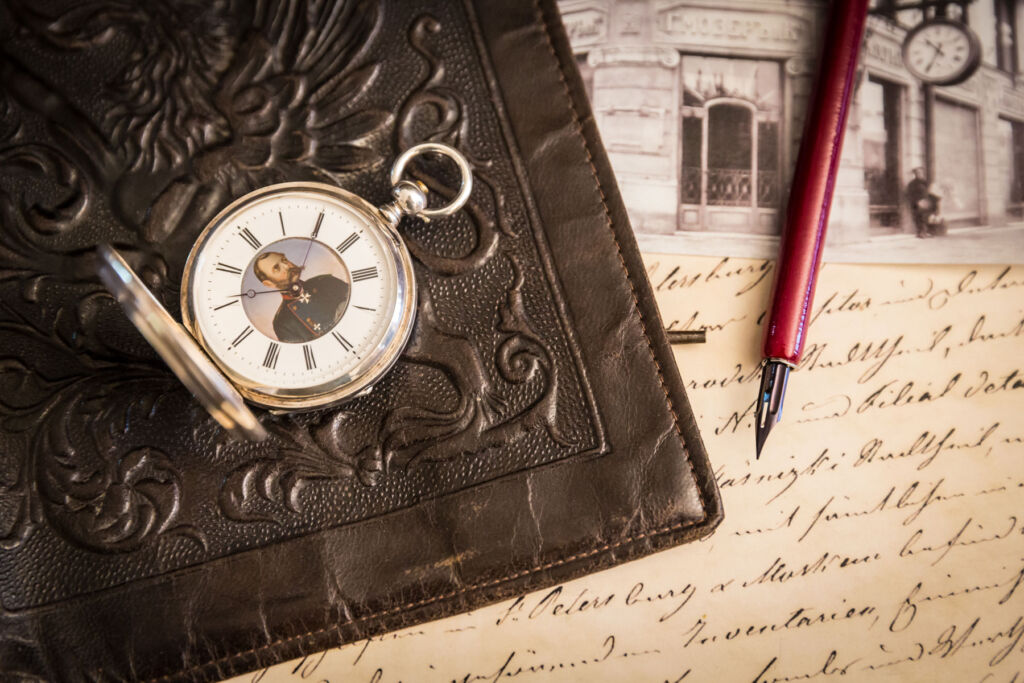 Describing the style Moser watches have evolved into, Meylan says: “It is classic, elegant and modern all at the same time. We consider every watch we make as a piece of art. People should recognise a Moser watch because of the design and not because it says Moser on it. We didn’t cancel what was done before, but we just built on it. We were respectful of its tradition when we took it over. It has the same movements as before. Part of my job as the CEO was to assess what was the Moser DNA and then try to improve on it.” 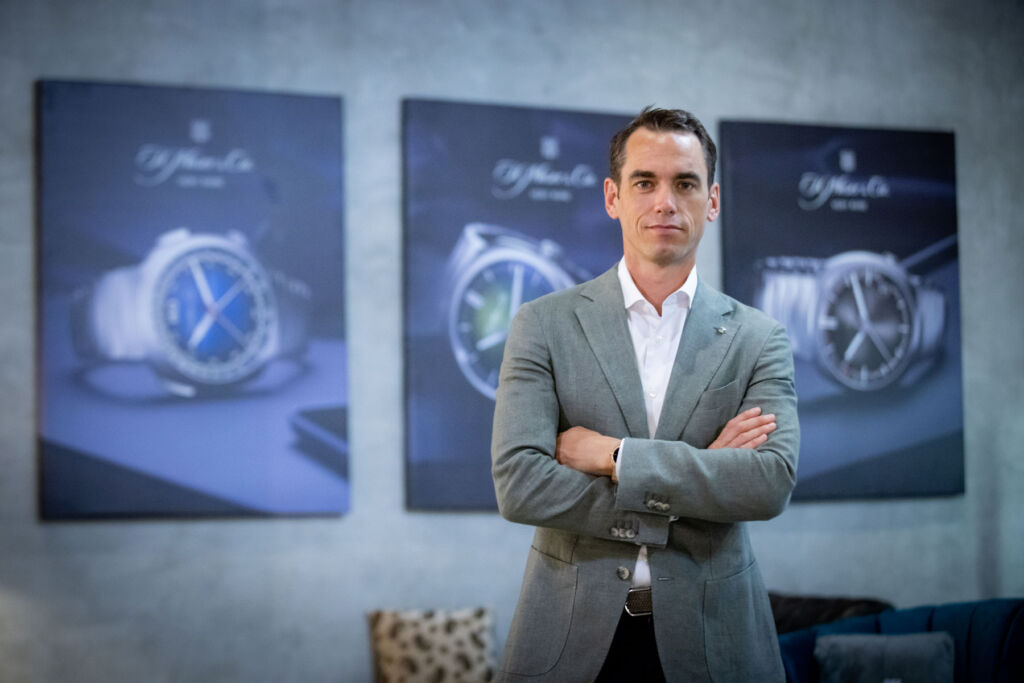 As for future plans, this on-the-go CEO has it all planned out. “We did some collaborations with fashion brands this year; one with The Armoury, a luxury men’s clothing brand and store based in Hong Kong which is very classic and elegant and another one with streetwear brand Undefeated based in LA,” Meylan says. “Next year, we plan to do more collaborations on the topic of the history of H. Moser.” That in addition to opening their first 100 per cent owned standalone boutique in Hong Kong.

With a close grip on all areas of his company, Meylan is not boasting when he says he has a 360-degree perspective of the industry. “My engineering degree has helped me understand the technical part of watchmaking, while my MBA has taught me about finance, marketing and negotiations. I’m a specialist in nothing but have an understanding of almost everything… I talk to all my departments and learn from all my staff to get a global perspective which allows me to make informed decisions,” he concludes humbly.

For further information on Edouard Meylan and his family and the limited edition, H. Moser & Cie watch, please visit www.cortinawatch.com or www.h-moser.com.