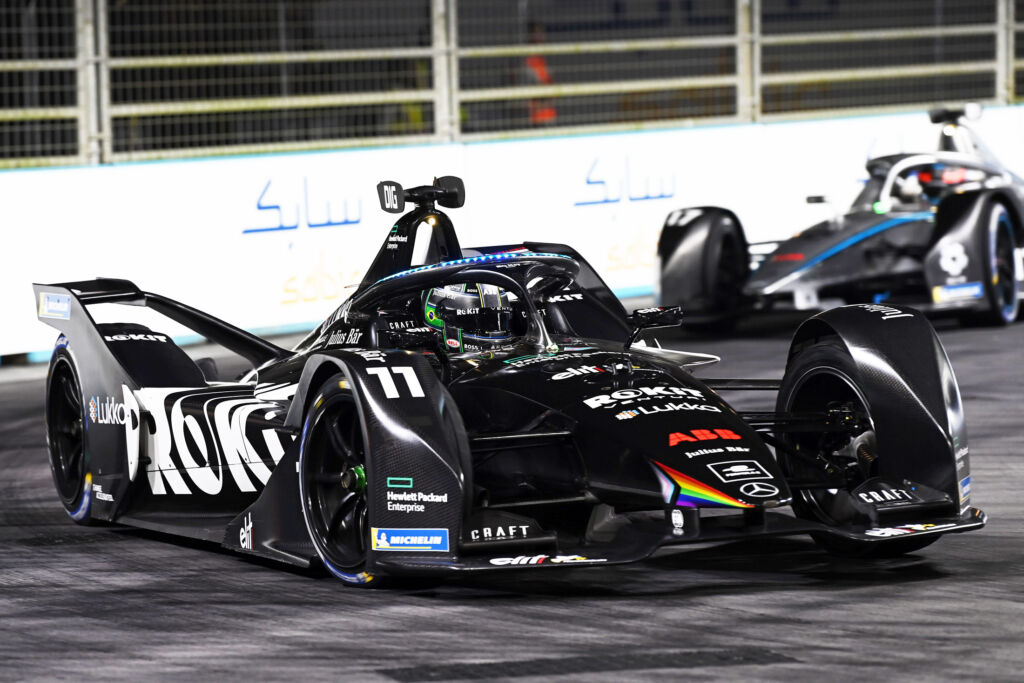 Formula E, the electric-powered sport, has been increasing in popularity with the ever-growing focus on finding alternatives to petrol and diesel-powered vehicles. Sabi Phagura went to see the ABB FIA Formula E-Prix Championships at London’s Excel to learn more about the sport and discover what makes it such an exciting day out.

Arriving at East London’s docklands venue some six hours before the race was due to begin, I was amazed to see it was already packed with supporters. Chatter about the qualifying positions and who would go through to SuperPole was abuzz as they soaked up the atmosphere ahead of the nail-biting race.

For a sport just eight years old, the atmosphere was eclectic (excuse the pun), akin to a football match that has been around for centuries. Wanting to get in on the action and watching season eight of Formula E being ‘played out’ live at London’s ExCel, it was time for me to delve deeper into the sport and learn firsthand what’s making it incredibly popular year-on-year. 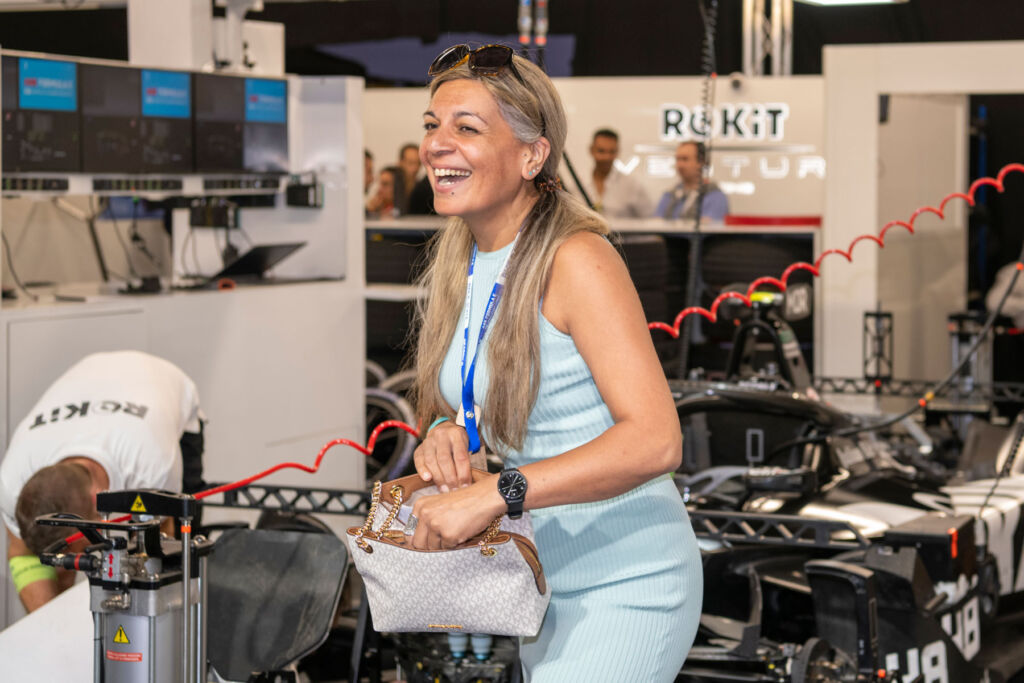 Now I must admit I’m not much of a spectator sports person because, as a fitness enthusiast, I get frustrated watching others getting in some exercise without being able to join in. But I’ve always been fascinated with racing, and my choice of computer games has always been the likes of F1. The racing was so taut and carefully calibrated that I felt like an F1 driver at my peak when playing. So to be present, up close and personal to the cars and drivers at ExCel, brought back a flood of happy memories.

The idea for an all-electric street racing series may have sounded bonkers once upon a time. Indeed, it was a mere collection of ideas scribbled down on a napkin by FIA President Jean Todt and the Spanish businessman and Formula E Chairman Alejandro. But so enamoured were the duo by this idea during a meeting in a Paris restaurant that they set about working on making it happen.

With their vision, Formula E made it from concept to reality three years later when the world’s first all-electric international single-seater race made its debut on the grounds of the Olympic Park in Beijing in 2014. 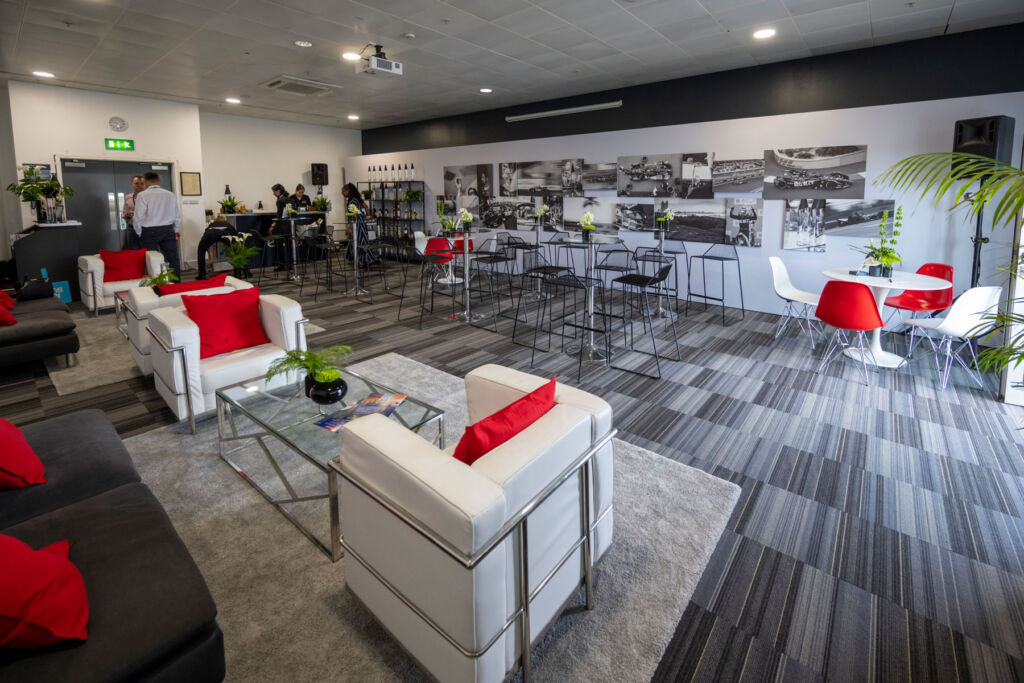 As the guest of elit™ Vodka, a principal partner of the ROKiT Venturi Racing Team, we were given the full VIP Race Suite experience from where we could watch the race from the second-floor balcony.

With the track flowing indoors and outdoors of ExCel, our standpoint overlooked the outside section. The atmosphere was abuzz with spectators discussing the cars, the qualifying line up and who would be entering the Super Pole shoot-out. Buzzwords and keywords I needed to get familiar with.

But first, the cars. The biggest difference between Formula E and other motorsports is the cars. Electric cars are cleaner and quieter than petrol or diesel and are powered by a 250kw battery. The cars can reach an impressive speed of up to 174mph. To take a closer look, we went behind the scenes to learn about ROKiT Venturi Racing’s vehicles. 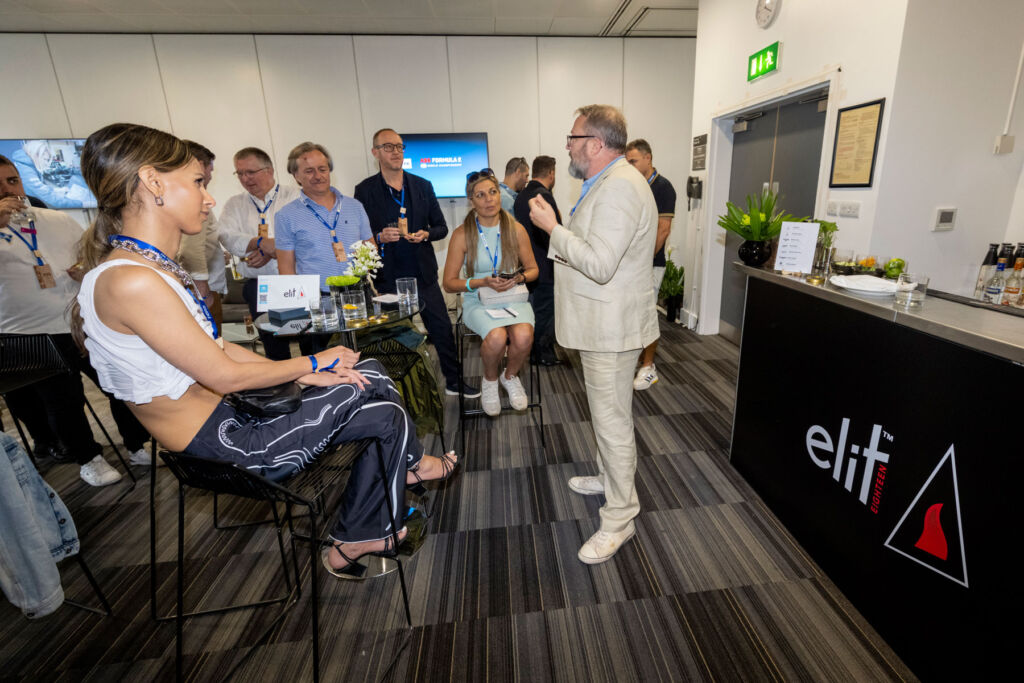 Ahead of this year’s 8th season, elit™ Vodka partnered with ROKiT Venturi Racing’s visual identity, with branding appearing on the front and rear wing, bargeboards and nose cone of the team’s livery. Branding is also present on the racing suits of drivers Edoardo Mortara and Lucas di Grassi and in ROKiT Venturi Racing’s garage.

The partnership is not out of place, with many sports teaming up with alcohol brands, and Stoli Group has been expanding its portfolio in recent years to appeal to global luxury consumers. And as the brand’s elit™ Vodka is one of the highest-rated white spirits in the world, receiving ten platinum awards and being named the best Vodka of the year on ten occasions by the Beverage Tasting Institute; it’s the ideal partner for ROKiT Venturi Racing. 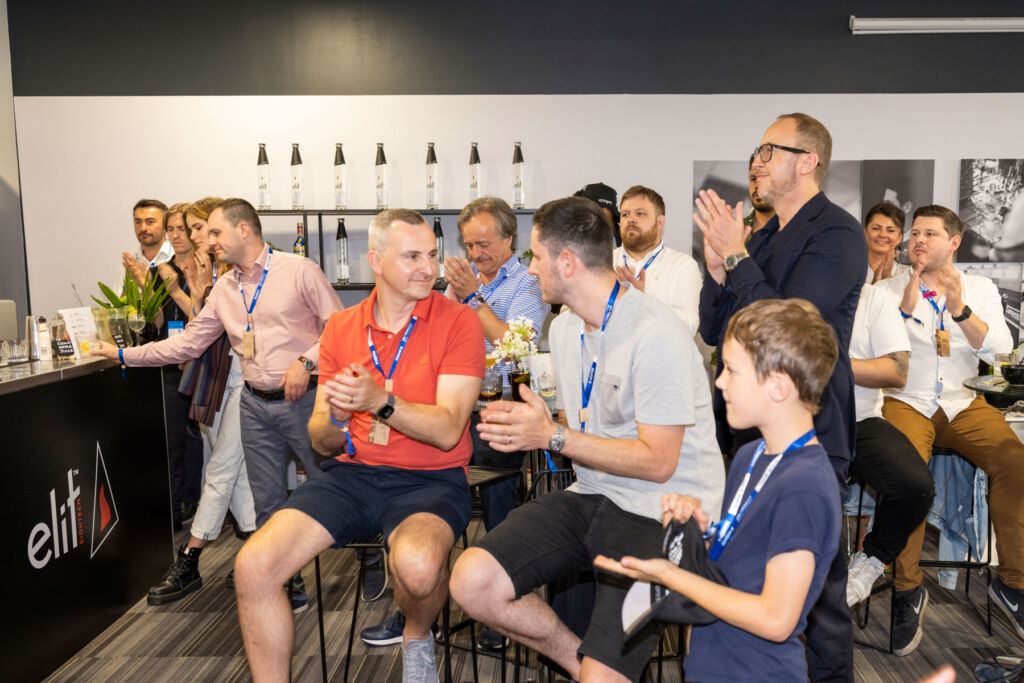 Off-track, the ROKiT Venturi Racing team is the force behind the record-breaking VBB-3′ bullet car,’ which set a new world record of 342 miles per hour on the salt flats in Utah, the USA, in 2016. With the record in hand, the ‘bullet car’ is still the world’s fastest electric vehicle. From its base in Monaco, Venturi designs develops and manufactures a range of electric vehicles, which benefit from the Formula E team’s efforts in the Championship.

I was eager to learn more, and plenty of willing fans in the Race Suite were happy to give me the lowdown. Ahead of each race, drivers compete in qualifying sessions to decide which order they line up on the grid. The qualifying lasts for an hour. After which, drivers are divided into groups of up to six cars defined by their positions in the championships. 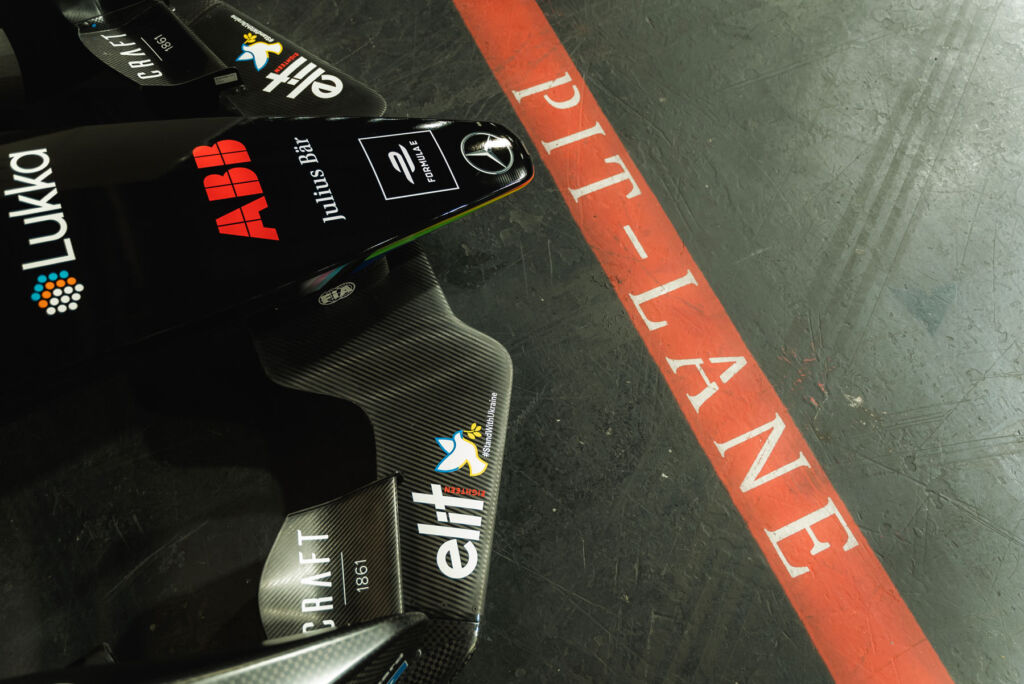 Drivers have six minutes to set their fastest lap time, and the top six drivers go into the Super Pole shoot-out to secure pole position and three points. Things are done a little differently when it comes to Formula E, and it didn’t surprise me to hear that the sport follows a different set of rules than other motorsports.

E-Prix has different formats where all drivers race for 45 minutes and a bonus lap thereafter. Drivers must complete the same laps as the lead driver at the end of the 45 minutes. The first driver to cross the finish line in the bonus lap after 45 minutes is hailed the winner. 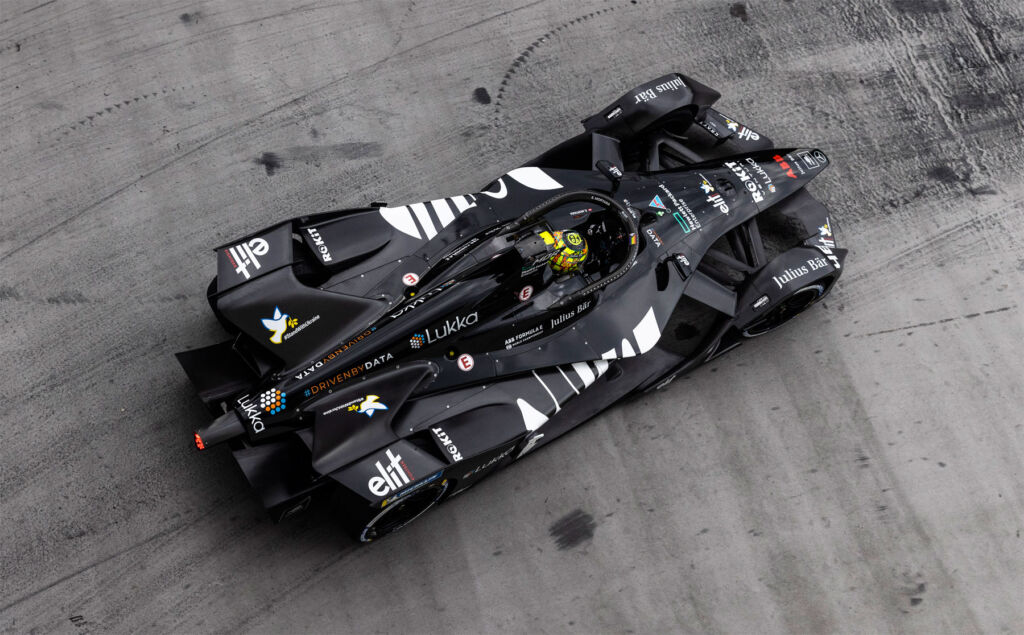 And there’s more to racing an electric car than just speed. The challenge includes battery management and the ability to develop tactics to manage power to ensure the vehicle doesn’t run out of energy; the drivers, therefore, need to apply mechanical knowledge, pay attention to detail, have confidence in their reflexes and remain calm under pressure. Armed with this new knowledge, my respect for racing drivers reached even greater heights.

Like other motorsports, championships are determined by points collected over the season. Each season, Formula E visits several cities worldwide where races are held on purpose-built tracks, most of which occur in city centres. Trophies are awarded to the top three drivers during a race, while points are awarded to the top 10. The points system used is the standard FIA scoring system which is totted up for both Individuals and teams to determine the individual winner and the winning team. 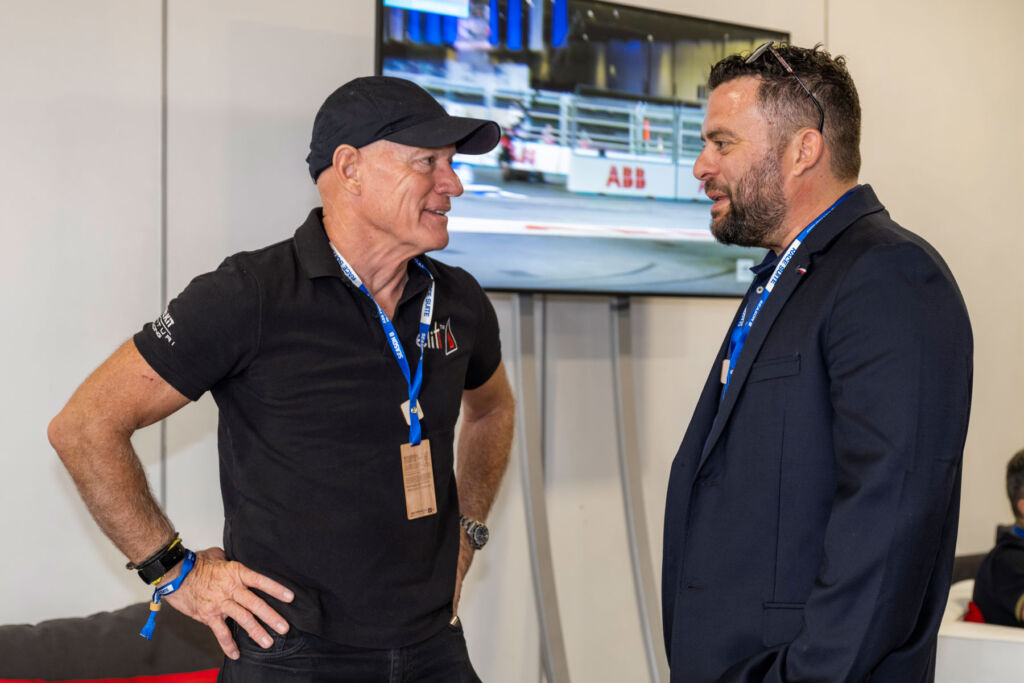 As I mentioned, I’ve always loved playing racing games as I feel fully immersed and engaged with the motor vehicle at hand. So, I was pleased to learn that Formula E has developed ways in which fans can interact with drivers to keep the race interesting and engaging to watch. One is the FanBoost, where fans can vote (online, via Twitter or app) for their favourite driver a week before the race. The three drivers with the most votes will receive extra power on race day and can deploy it as they wish. Another boost that all drivers can access is the Attack Mode.

Every driver must use the Attack Mode once during the race, which sees them drive through the Attack activation zone. This could cause them to slow down, but the upshot is that drivers are rewarded with a short boost of power, allowing them to attack again and attempt to gain any lost places. Again this keeps the race interesting and fans at the edge of their seats.

The experience of watching the Championships live was fascinating. Witnessing the wheel-to-wheel action of 22 drivers from 11 teams was nothing short of thrilling. Being so close to the cars was mind-blowing, and having access to drivers such as Lucas di Grassi was awe-inspiring. 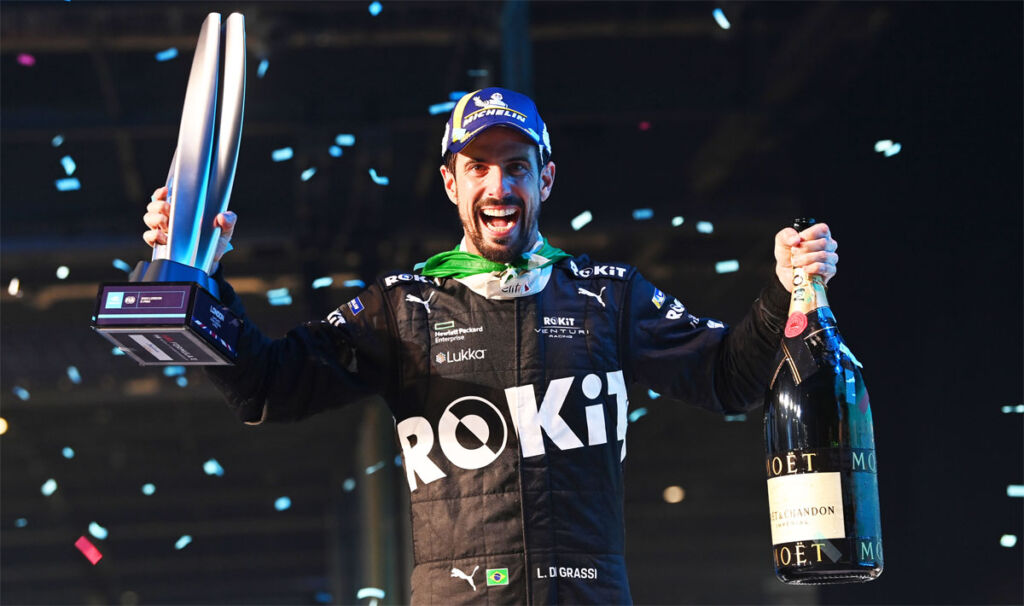 I am pleased to say Lucas won the London E-Prix with Edo Mortara crossing the line in 13th place during the weekend of my visit. The results put ROKiT Venturi Racing second in the team standings, Edo third and Lucas sixth in the driver standings. An ideal moment for the team to toast the win with an elit™ Vodka on the rocks.

There’s no doubt that these are exciting times for Formula E. One of the purposes of Formula E was to highlight the importance of electric cars in an attempt to create a more sustainable future free of air pollution. And it’s gaining momentum. The race is set to get bigger and better when the all-electric single-seater series will take in more races (18) than ever before. As Formula E heads into the ninth series, now really is a great time for me to get stuck into my new hobby.

Formula E – Where and How?

For information on everything, you need to know about Formula E, visit www.fiaformulae.com.