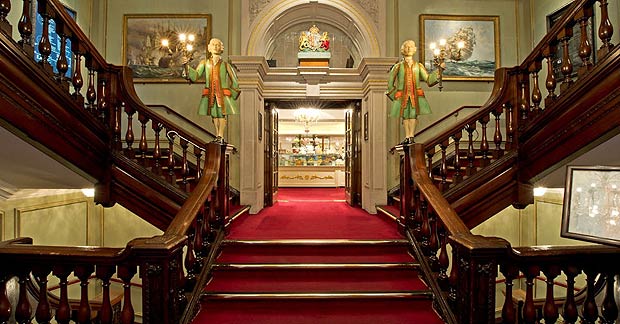 To celebrate The Queen’s Diamond Jubilee, Fortnum & Mason follows its long-standing tradition by decorating the building from top to toe, inside and out. We first started putting our royal glad rags on the outside of the Piccadilly store in 1863 to mark the wedding of the future King Edward VII to the beautiful Princess Alexandra of Denmark. Stars, made up of lit gas jets, illuminated the building for several evenings during the wedding celebrations. Since then, we have decorated the building for royal weddings and coronations to add to the pageantry of Piccadilly on these national occasions.

The inspiration for this year’s theme harks back to Queen Elizabeth’s Coronation, when the Queen’s Beasts – ten heraldic creatures (mythical and real) taken from her Majesty’s ancestors’ coats of arms – made their first spectacular appearance.. The Beasts are the Lion of England, the Unicorn of Scotland, the Dragon of Wales, the Griffin of Edward III, the Falcon of the Plantagenets, the Black Bull of Clarence, the Yale of Beaufort, the Lion of Mortimer, the Greyhound of Richmond, and the Horse of Hanover. As they are normally rather fierce creatures, Fortnum’s has brought them to 3D life and given them bright colours and a happy aspect. The beasts dance along, playing a variety of musical instruments, turning them into the very embodiment of exultation and jubilation.

Paul Symes, Head of Visual Presentation explains, “The musical focus was chosen for its universal appeal, a joyous subject that everyone worldwide will be able to appreciate and relate to, regardless of nationality.”

The breath-taking decor will consist of a giant steel musical stave, suspended from the exterior of the front of the store, while enormous ribbons weave in and out of the building. The atrium and window displays will be filled with dancing Beasts. As a proud Royal Warrant holder, and staying true to Fortnum & Mason’s commitment to  supporting British craftsmanship,- all technical work and décor has been undertaken by British craftsmen, using materials sourced within the UK.

This is Fortnum’s most technically advanced and complicated celebration display ever and – just like in 1863 – uses modern technology to bring joy and merriment, beauty and fun to the Piccadilly streetscape on this most wonderful national occasion.