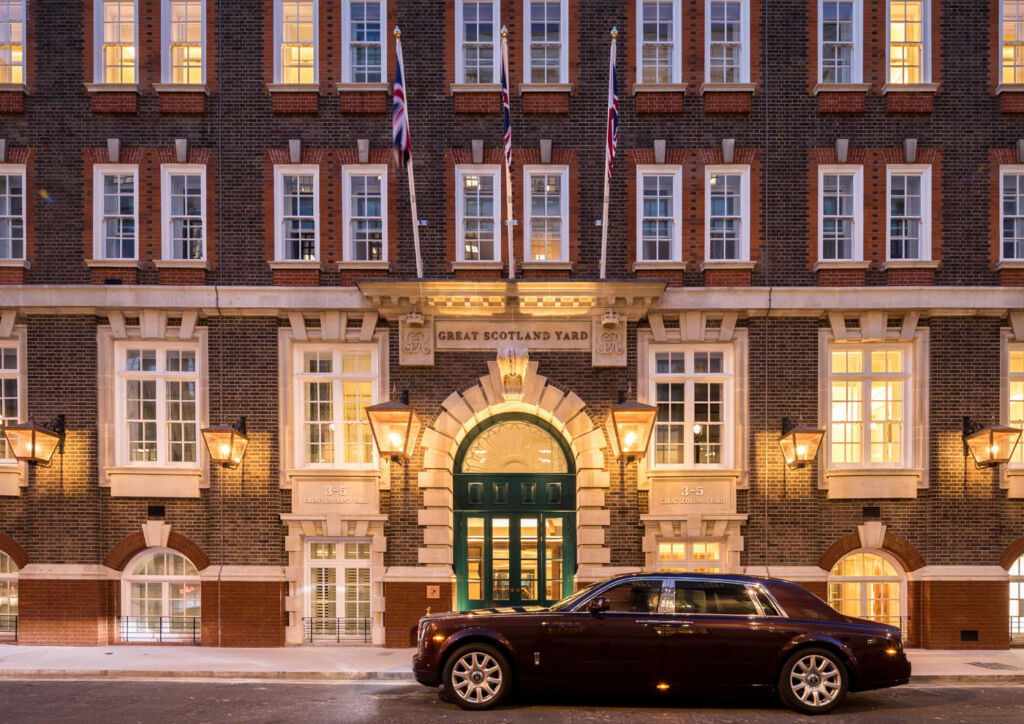 Leading London developer Galliard Group has completed its 3.5-year construction of the new Great Scotland Yard Hotel. The building was the location of the original Scotland Yard Metropolitan Police HQ and later offices for the Ministry of Defence. Today it is London’s magnificent new 93,000 sqft 5-star hotel, owned by the Lulu Group International and operated by Hyatt.

In 2013 Galliard Group acquired a 125-year Crown Estate lease on the building which was exchanged for a forward sale of the hotel when completed to Abu Dhabi based LuLu Group International in 2016 for £110 million. Galliard’s construction division has now completed the £75 million construction project to deliver the new hotel, working with world-renowned hospitality design firm Hirsch Bedner Associates.

One of the finest 5-star hotels ever built in London, set to launch later this year, the new £110 million seven-storey hotel at 1-5 Great Scotland Yard provides 153 bedrooms and suites; the 11 suites including a spectacular townhouse suite created from part of the original Scotland Yard Police premises. 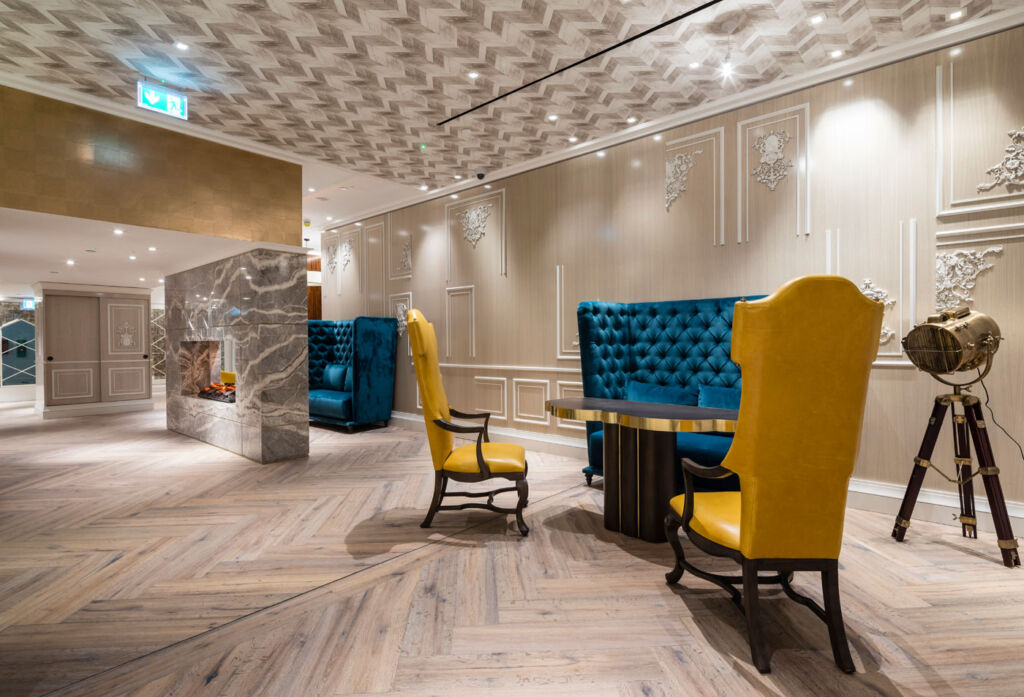 Over the last 10 years, Galliard Group has built 10 hotels providing 2,061 bedrooms and suites and a range of hospitality and leisure amenities. Working with a range of clients, past hotel projects include new build and refurbishment schemes including the 5-star St James’s Club & Hotel, Staycity Hotels, Premier Inn, 4-star Park Plaza Hotels and the Grade II-Listed Jacobean Harte & Garter Hotel and Spa.

To deliver the Great Scotland Yard Hotel the construction division of Galliard Group, led by CEO Don O Sullivan and MD Robin Hawkins, project managed a team including Head of Galliard Design Lesley Lawson and Galliard Construction Director Darren Maguire, working alongside professional consultants and an international team on site of up to 200 people, from 18 different countries. Galliard was responsible for construction and build, shell and core design, fit out, specification procurement, logistics and M&E. Delivery required Galliard to liaise with a range of stakeholders including Westminster Council, The Crown Estate, TFL, BT, MOLA and Westminster Highways.

The site and buildings at 1-5 Great Scotland Yard have a fascinating history. In Tudor times the location served as an Embassy-style dwelling for the Kings of Scotland when they visited King Henry VIII and Queen Elizabeth I at neighbouring Whitehall Palace: hence the name Great Scotland Yard (meaning: the place of the Scottish Lords).

It was here that the famous Plaistow Marshes (1864) and Jack the Ripper (1888) crimes were investigated and Scotland Yard was made famous by novelists including Charles Dickens and Sir Arthur Conan Doyle. In June 1891 the police headquarters moved to a new location, which was named New Scotland Yard.

In 1901, the townhouse at 1 Great Scotland Yard was leased to the armed forces and this saved it from demolition in 1910 when the other townhouses and adjacent gardens were replaced by the current Edwardian building at 3-5 Great Scotland Yard which served as the British Army Recruitment Office and Royal Military Police headquarters. It was from this HQ that Lord Kitchener famously told WWI recruits “Your Country Needs You” and there were cells in the basement for Army deserters. In 1982 a refurbishment introduced a new atrium and the building later became the Ministry of Defence Library until 2004.

Galliard Group has now converted the Grade II listed Georgian townhouse and grand Edwardian building into one of London’s finest hotels. The elegant facades have been restored, behind which luxurious interiors with a bespoke specification provide exquisite private and public entertaining spaces which pay tribute to the rich history of Great Scotland Yard, alongside hotel rooms and suites of exceptional quality. 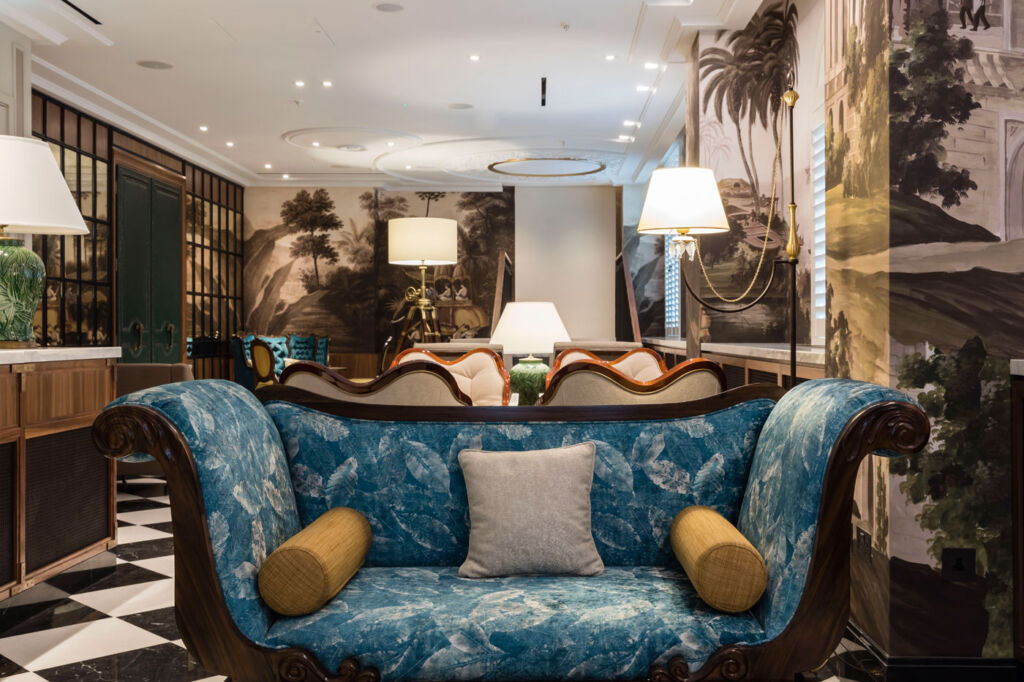 To deliver the outstanding specification Galliard has sourced over 200 different custom-made materials, fixtures and fittings from locations including Italy, Vietnam, China, Japan and Turkey using the finest finishes including different marbles, stone, crystal, wood and leathers. Artisans from six different countries were sourced to create many of the handcrafted special finishes including wall panelling, bespoke flooring and ceiling mouldings.

Originally five storeys in height, the main Edwardian building has a grand Imperial Red brick and Portland stone façade with arched main entrance, ornate pediment and tall windows with feature brick and stone detailing. Galliard has extended the building, adding two new levels of basement and two new floors above the original roof level including a top storey with a period-style Westmorland slate clad mansard roof, with handmade slate, and ecological features. Digging to a depth of 9 metres (30 ft), the basement excavation is one of the largest and most complex undertaken in Whitehall in the last decade.

Double doors at the hotel entrance lead into a vestibule with an 8-metre (26 ft) high ceiling and feature chandelier by Precioisa, which opens onto the main reception foyer which has Italian Crema marble flooring in a bespoke marquetry design created from different coloured marbles and custom-design plasterwork ceiling with cornices and ceiling roses created by artisans. In keeping with the building’s heritage, the walls are lined in walnut panelling, antique bronze mirrorwork and bespoke joinery.

Secret doors give access to the whiskey bar and signature restaurant. Off the main foyer is the concierge room which has antiqued mirrored walls and a coffered ceiling bordered by bespoke mirrorwork. 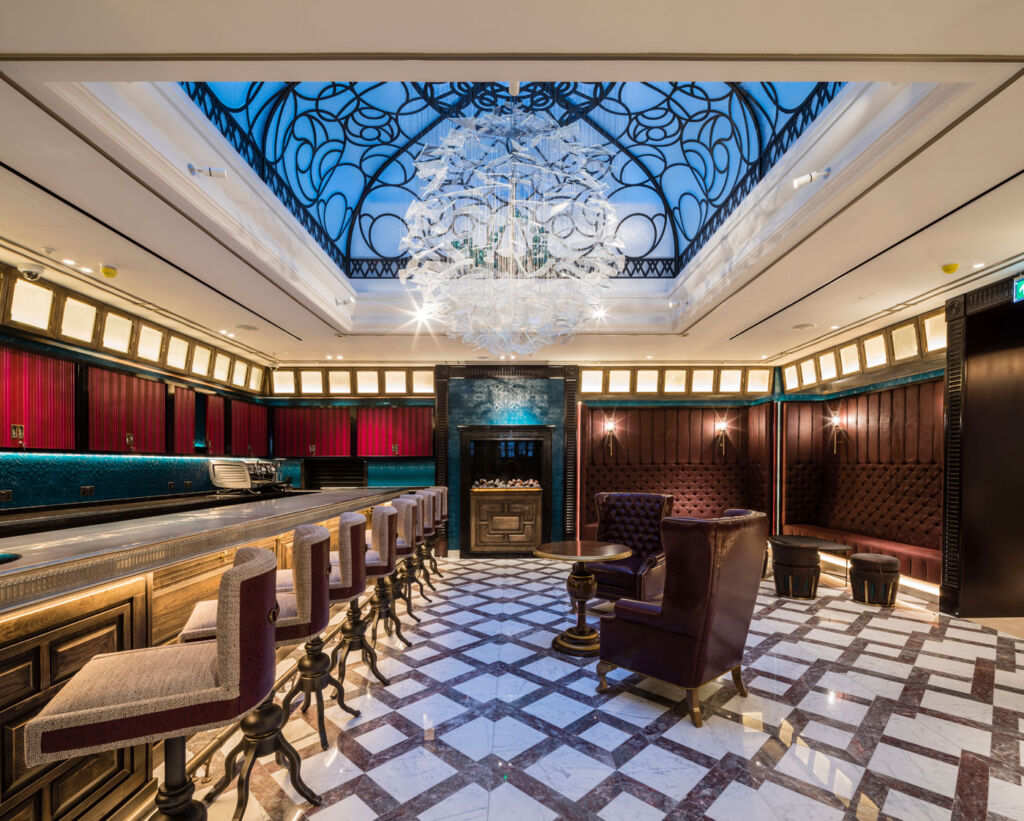 The main cocktail bar has a spectacular glass feature dome and bespoke crystal glass sculpture/chandelier, created by Lasvit, the Bohemian lighting specialist. Above the glass dome is a landscaped atrium, designed by Anne French Associates, which rises through the centre of the hotel. The cocktail bar has marble marquetry design flooring, a bespoke bar crafted from custom-design metalwork with cabinetry for drinks and glasses, whilst built into the walls are banquette seating lined in button-cushion leather.

Located behind faux book doors in the main foyer, the whiskey bar/clubroom has timber marquetry flooring crafted by artisans from Italy, timber-panelled walls and plasterwork ceiling. The bar is created from natural three trunks and the room is complete with bespoke display cases for whiskey and other drinks. Another lounge is designed in the style of a Victorian palm court with Indian inspired wallcovering and ironmongery, complete with feature fireplace and ceiling designs.

On the lower ground floor/basement 1 the cells, where legend has it Rudolf Hess was interrogated in 1941, have been replaced by a gymnasium with changing rooms, meeting/conference rooms, a 120-seater conference space/ballroom and a series of VIP function rooms. The function spaces have been designed to replicate the interiors of a grand London townhouse with bespoke Oak parquet flooring, chevron patterned ceiling, marble fireplace, kitchen/serving area with Union Jack Smeg fridges and library area with bespoke joinery. Basement 2 contains back of house facilities including plant, kitchens, staff offices and leisure area.

With concept designs from Hirsch Bedner Associates, two hotel bedrooms were initially mocked-up on site by Galliard, allowing for the creation of beautifully designed and finished bedrooms and suites on the upper floors of the hotel. The hotel bedrooms have ornate coffered ceilings, bespoke fitted wardrobes, mini-bar units and mirrorwork; and luxurious bathrooms with marble flooring, walk-in showers and bespoke vanity units. The suites have an ante room, living area, bedroom suite with feature stone fireplace and VIP bathrooms, with selected suites benefitting from private terraces offering views onto Nelson’s Column, Buckingham Palace and Westminster. 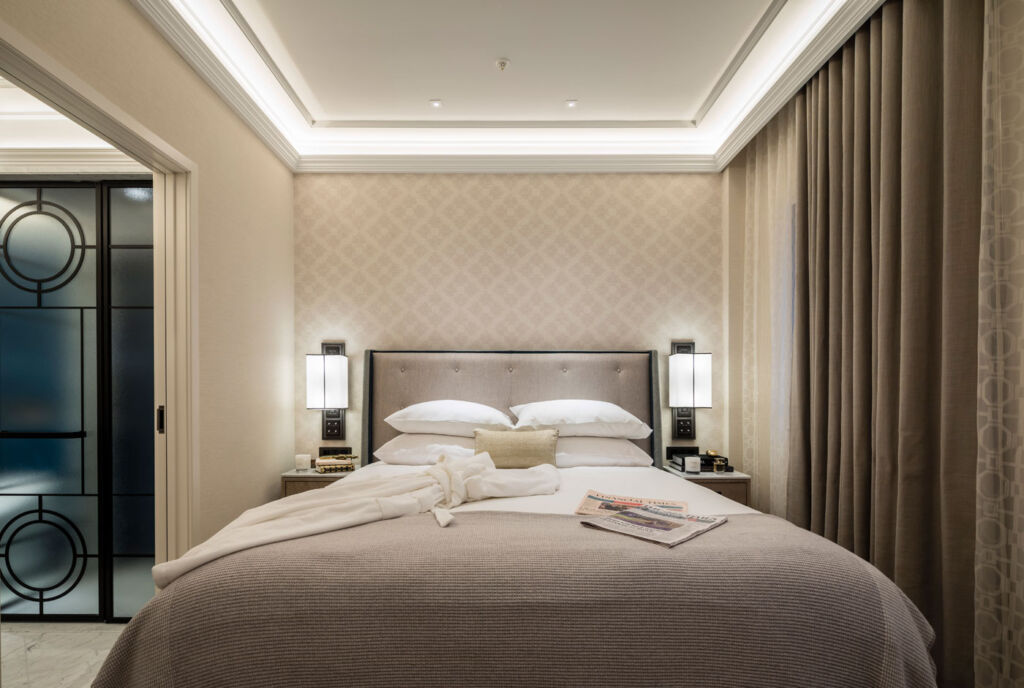 The adjoining Grade II listed townhouse at No.1 Great Scotland Yard, once the home of the Metropolitan police, has been incorporated into the main hotel. It has been transformed into a magnificent VIP-suite for visiting business tycoons, celebrities, musicians and heads of state. Arranged over several floors the VIP-suite links into the main hotel but has the benefit of its own private street entrance, opening onto the historic yard which helped give the address its famous name. Like staying in a London townhouse, the VIP-suite benefits from its own family/living room, kitchen, dining room, private study/reception room, wine cellar and two floors of bedrooms.

Stephen Conway, Executive Chairman of Galliard Group said: “Galliard’s construction division has delivered one of London’s most outstanding 5-star hotels. With its iconic address and famous history, the hotel’s interior design cleverly references the building’s police and military past through the use of shields, emblems and historic details etched into glass and metalwork.”

Don O’ Sullivan, Chief Executive of Galliard Group said: “Over the last decade Galliard has built ten hotels and the Great Scotland Yard Hotel sets a new benchmark for high-quality construction and exquisite design. Our vision was to deliver a world-class hotel of the quality of The Mercer or the Chateau Marmont; a place renowned for exceptional service, destination dining and leisure and outstanding luxury and quality.”

Spend Time with Santa Claus this Christmas in Swedish Lapland

Head to the Francis Hotel Bath – McGallery for a Historical Break