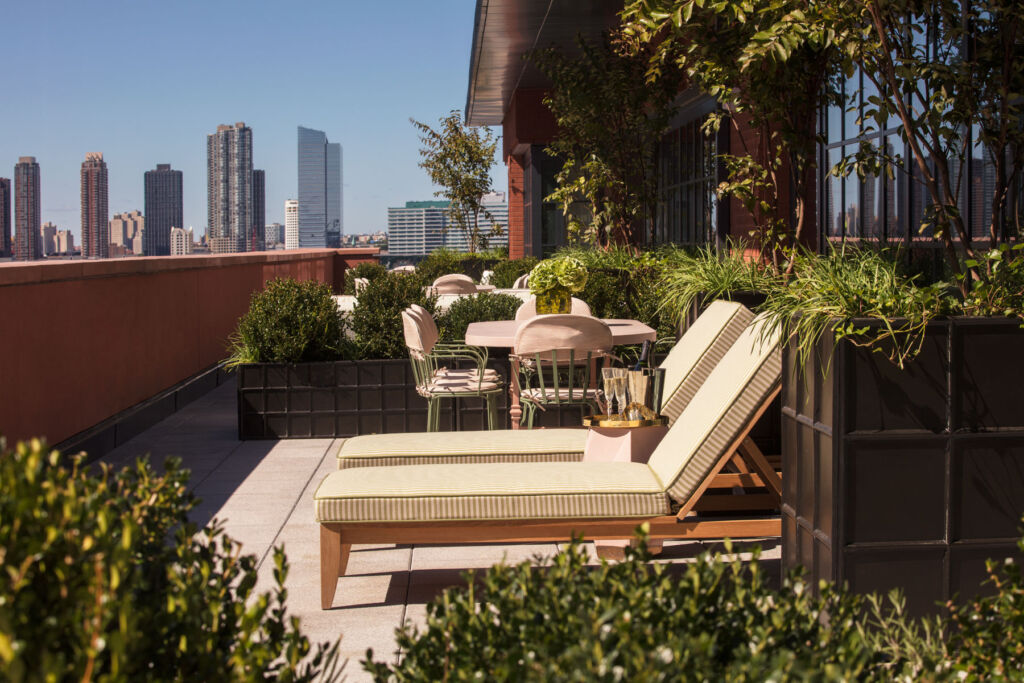 Group Barrière has announced the much-anticipated Hotel Barrière Fouquet’s New York in Tribeca has officially opened. The luxury property contains 97 rooms and suites and is a joint venture between the iconic French brand and Caspi Development.

Hotel Barrière Fouquet’s New York is located at 456 Greenwich Street, and its opening brings a new level of sophistication to New York. The Martin Brudnizki Design Studio was responsible for the design, and the result is a perfect blend of Parisian opulence and Tribeca panache.

The new luxury hotel is Groupe Barrière’s début property in the United States, which is quite extraordinary as the family-run group was founded more than a century ago in 1912. The group operates various luxury properties worldwide, including Le Carl Gustaf in St. Barth’s, Le Majestic in Cannes, Fouquet’s Paris on the Champs-Elysées, and the Palace Les Neiges in Courchevel. 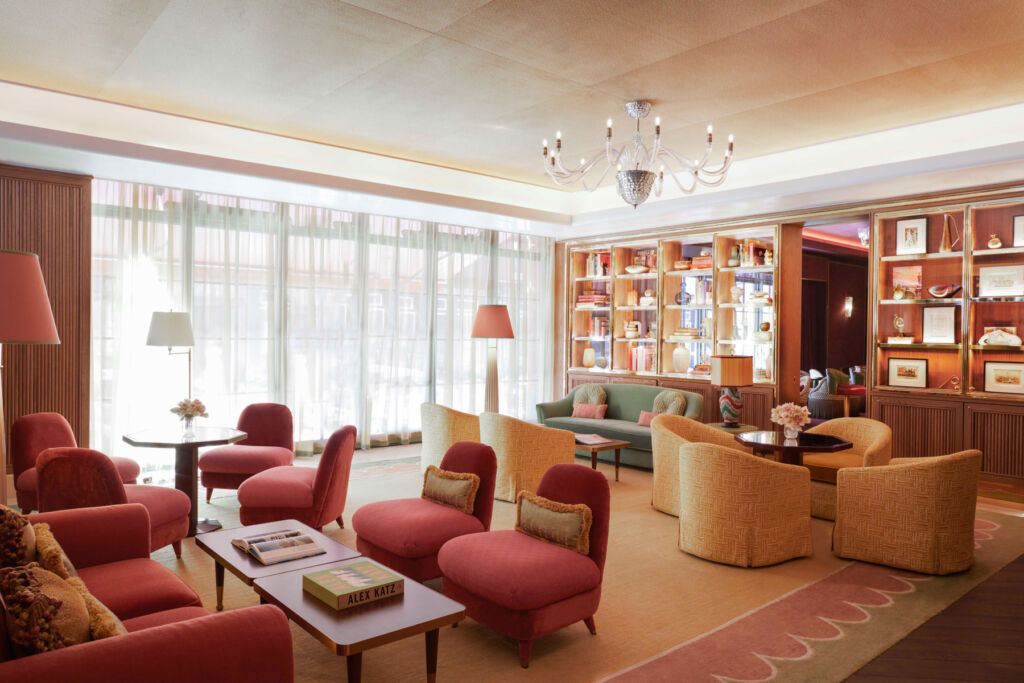 “The opening of Hotel Barrière Fouquet’s New York is a massive achievement for Groupe Barriere and our teams,” said Dominique Desseigne, Group Chairman and CEO. “I am proud to see our iconic and symbolic brand Fouquet’s cross the Atlantic and look forward to continuing to share our French art de Vivre.” 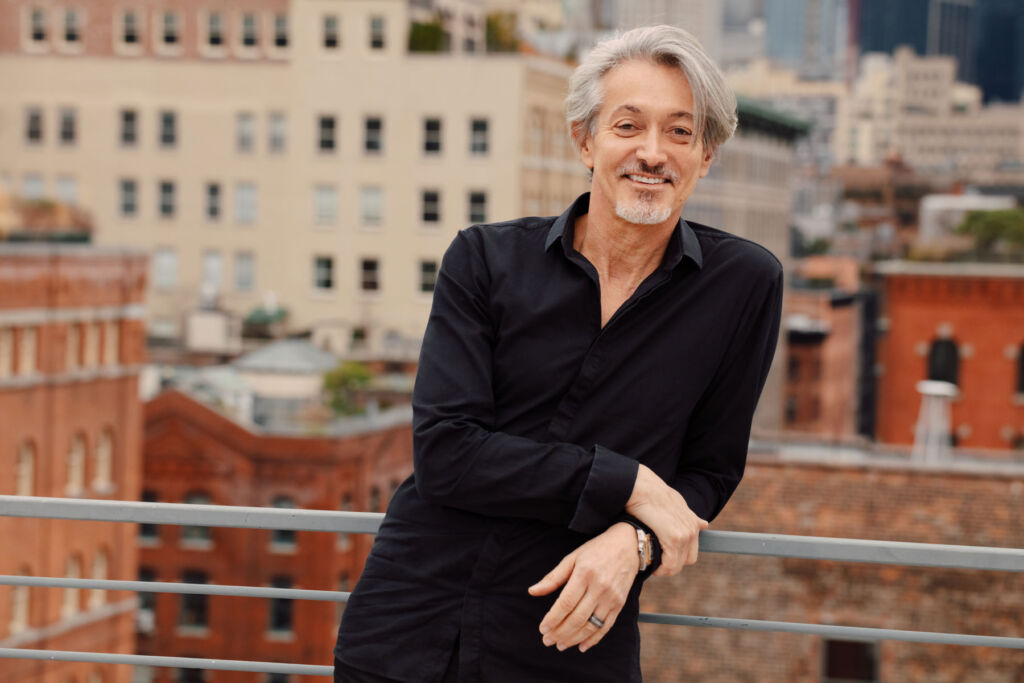 “I am delighted to be an integral part of Groupe Barriere opening the doors of their first property in the United States. The hotel adds to the abundance of French culture found throughout New York City,” added General Manager Gilles Stellardo (shown above). 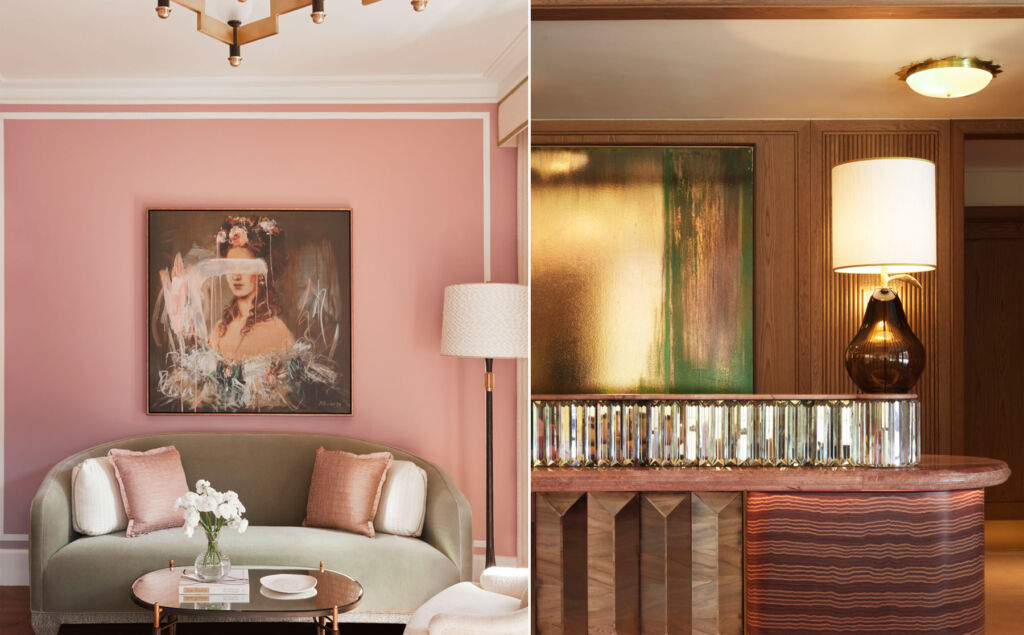 Hotel Barrière Fouquet’s New York is designed by interior designer and architect Martin Brudnizki. The hotel’s design blends Tribeca’s modern industrialism and Paris’s elegant classism with Art-deco touches, which are evident throughout the property. In his design, Brudnizki paid homage to the brand’s Parisian roots through the hotel’s moulding, his use of elegant fabrics, and the lavender-centric colour scheme seen throughout the hotel.

“We’re excited for the imminent opening of Hôtel Barrière Fouquet’s New York, which has seen our studio work closely with Caspi Development and the Barriere team on introducing their iconic brand to New York,” said Martin Budnizki. “Our design reflects the unique spirit of the Barriere brand whilst feeling relevant and local to the Greenwich neighbourhood, balancing an elegant Parisian aesthetic with the energy and style of Tribeca.” 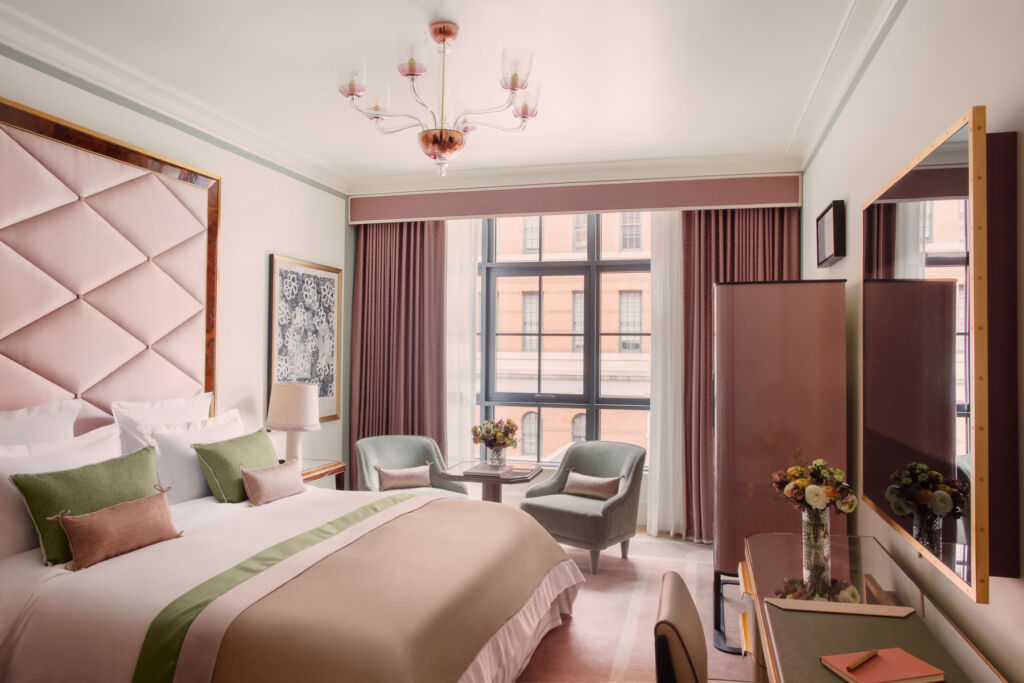 The hotel’s crown jewel is Le Grand Appartement Terrasse, an expansive two-story suite on the hotel’s 7th and 8th floors. The Presidential Suite features unique colours showcasing soft greens, blues, and gold, which is a departure from the main decor seen throughout the hotel.

The suite comprises two and a half bathrooms, entertaining and dining areas, an executive office, a private terrace, a king-size bedroom, and three private balconies on the hotel’s east and west. The suite’s interior also features glossier finishes, antiqued mirrors, plush fabrics, a massive chandelier, and floor-to-ceiling murals of exotic gardens and landscapes that line the stairwell and entry walls. 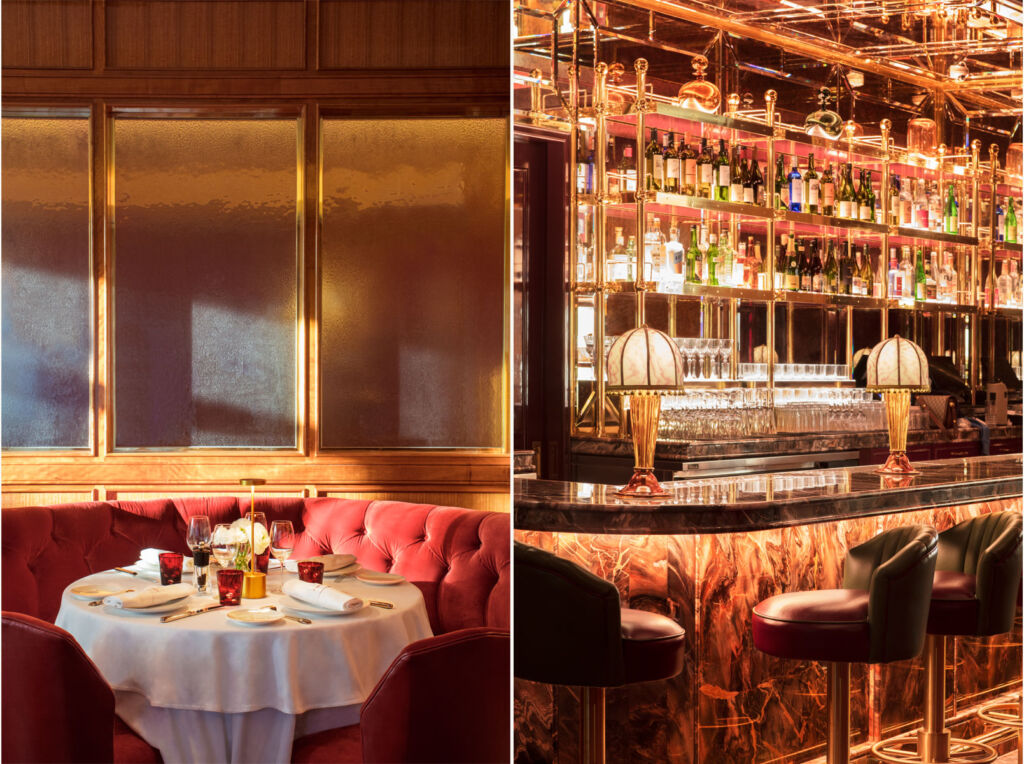 Around two-thirds of the brasserie’s menu will mirror the original, with the rest of the menu taking inspiration from New York’s rich culinary heritage and local farms and fisheries. In addition to the brasserie, the hotel features Par Ici Café, which serves a menu of vegetarian dishes. The vegetarian café emphasizes the versatility of locally grown produce through the kitchen team’s classically trained techniques. The property also features Titsou Bar, which draws its inspiration from the French speakeasy Le Marta Paris.

Spa & Wellness
Spa Diane Barrière, named after the late president of Groupe Barrière Diane Barrière-Desseigne, serves as the property’s haven for well-being and beauty. The spa will feature a menu of signature treatments, five treatment rooms, an indoor swimming pool, and a salon. The spa will use the brand’s products and highly personalized skin and beauty treatments in partnership with Biologique Recherche.

Meetings & Event Spaces
The Cannes Cinema and event spaces, located on the cellar level, will be utilized for film premieres, special screenings, corporate launches, and an array of other events. The screening room pays homage to the group’s deep ties with the film industry. In addition to the screening room, the event spaces include a large pre-function room and two meeting rooms that can be combined to create a large event space.

The photography used in this feature is courtesy of Matthieu Salvaing. 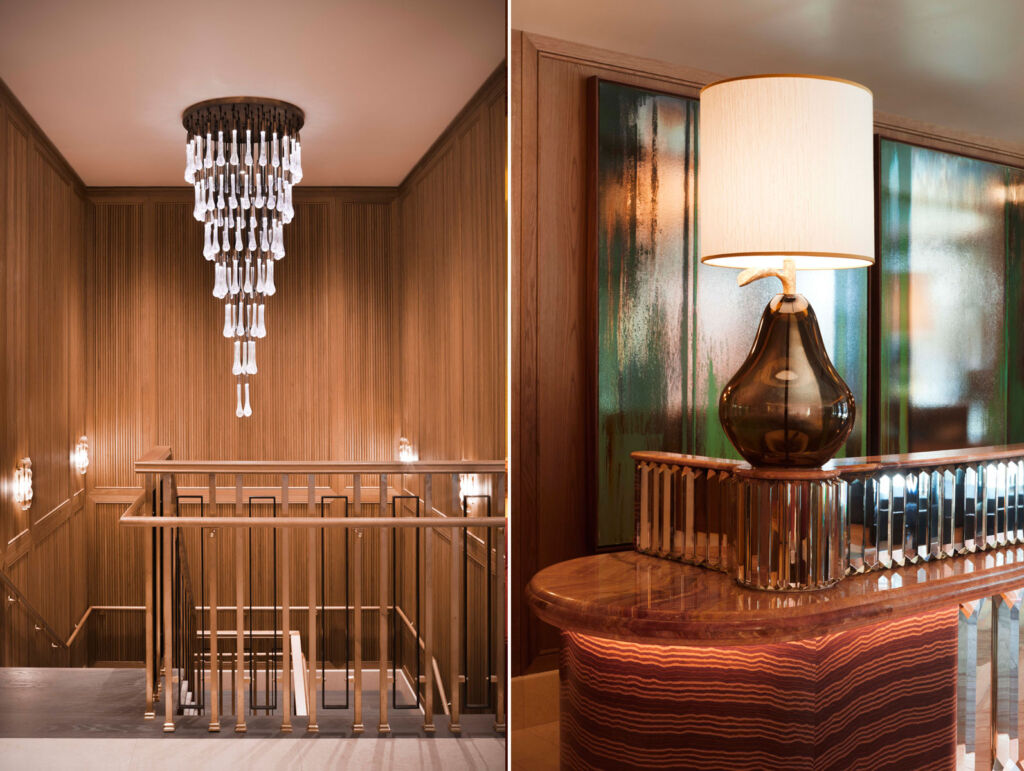