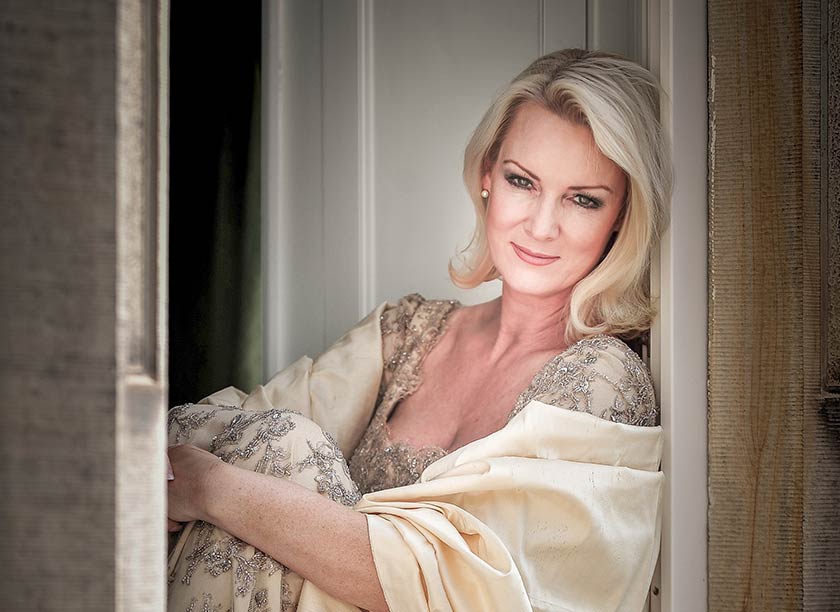 A few months back, Luxurious Magazine journalist, Simone Zeffiro had a unique opportunity to meet one of the most talented singers and renowned personalities on the European music scene, Friederike Krum, Mezzo-Soprano.

Friederike Krum is a German London-based singer. Her powerful voice, talent and stage presence has led her to collaborate with some of the biggest names on the international classical music scene such as Plàcido Domingo, Neil Shicoff, Agnes Baltsa and Eva Marton. Her repertoire includes opera, musicals, evergreens, Christmas songs, soul, jazz and many other genres.

As soon as I saw Friederike on stage and heard her voice, I immediately fell in love with this eclectic artist and thought her to be an ideal subject for a Luxurious Magazine interview.

Simone Zeffiro: I understand that your love for music began at an early age; do you remember when you decided that music could be part of your future and was there a particular event that prompted this?
Friederike Krum: I sang all through my youth with my mother in the local church choir and at some stage I was asked to sing a little solo around the age of 16 and it felt as if I was given wings when I performed solo in front of an audience. This was the moment I knew I wanted to do this for a living. 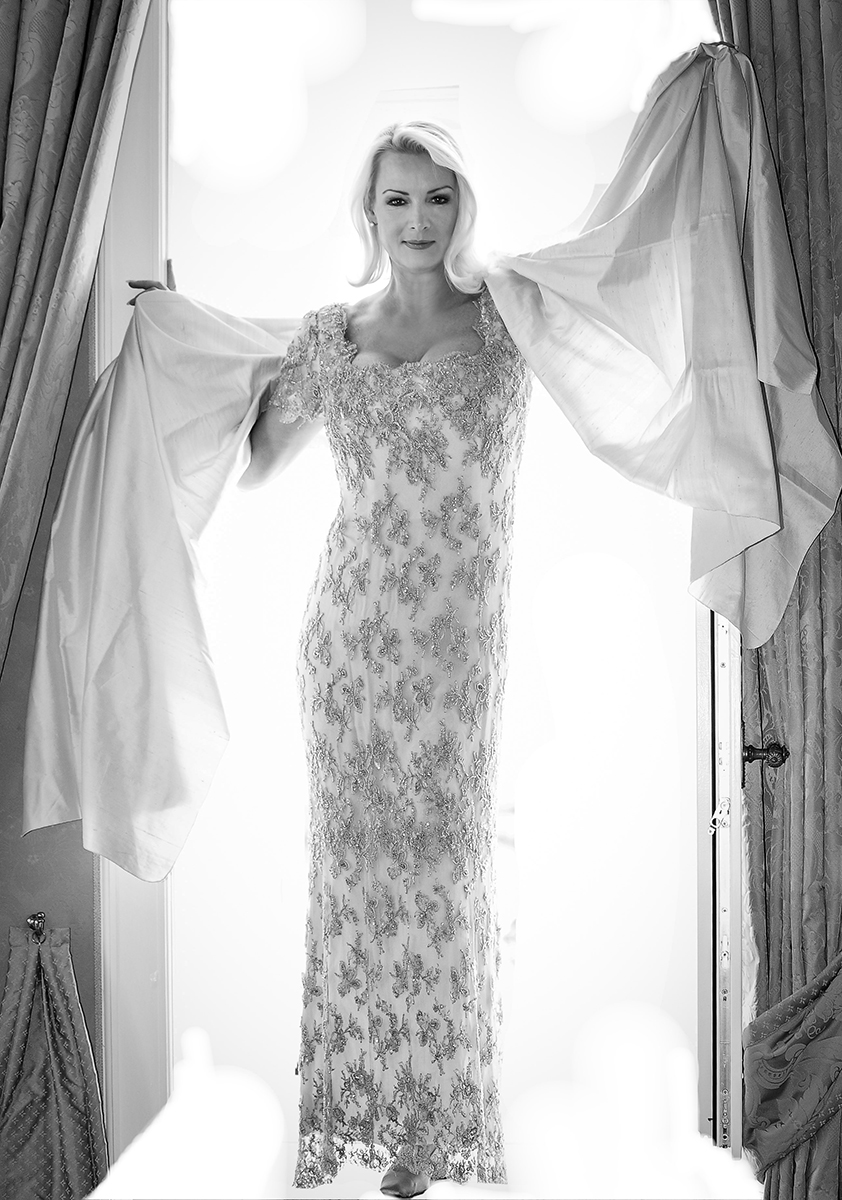 SZ: Your career has made you recognizable in many places around the world, but singing to your level requires great vocal extension, unwavering dedication and hard work; to get to this level, where did you study and who was your teacher and mentor?
FK: I went to the prestigious school of Music, dance and drama in Hamburg and my teacher was Prof. Ingrid Kremling. I had later private lessons with the world famous Elisabeth Schwarzkopf which was very grueling as she was merciless in her expectations but she taught me to reach for the impossible and make it possible. She was discipline pure and I learnt to push myself but equally to never underestimate that I am unique and have to find my very personal strength to find my place in the very highly competitive world.

SZ: What about your family? I am sure they are all extremely proud of you; is there any other member of your family with similar vocal skills?
FK: My mother has a beautiful voice and loves music. I grew up surrounded by classical music at home as my parents listened to nothing else and my sister and brother both played the piano as did I on top of the Cello.

SZ: Over the years you have performed in many different music fields, what type of music gives you the most satisfaction and why?
FK: I am very versatile and I truly love different styles of music. I have always disliked that classical music was regarded as higher then other genres. There are different genres and within them are fantastic pieces of music and lesser and great artists and lesser good ones. I love about opera the challenge to act credible while at the same time perform a truly difficult form of singing that demands a huge amount of skill technically as well as physically and as sung without microphones the projection has to be perfect yet one is not always able to face the audience as one is acting a scene so the voice has to be projected as optimal as possible.

SZ: You have walked upon some of the most prestigious stages around the world and accompanied extraordinary musicians and singers, none probably more iconic than Plàcido Domingo; do you remember the first time you met him? Would you explain our readers what are the feelings and the emotions of such a meeting?
FK: Ha, that is actually a really sweet story. As a student I had a job in the evening, which ironically as a singer was to do promotion for Davidoff Cigarettes. It was a fun job though as we were in teams and given a car and outfits and were asked to attend all cool parties and restaurant to introduce the new Davidoff to people. I entered an Italian restaurant in Hamburg and turned round to show another person the cigarettes and it was Placido Domingo. My jaw dropped and I was immediately apologizing to him for offering him a cigarette saying he of course does not smoke and started stammering utter nonsense as I was so overwhelmed standing in front of my idol.

He was so sweet and asked me to calm down and tell me who I was. I gave him my name and told him I was becoming an opera singer and he was enchanted with that revelation and asked me to sit down next to him. We talked and he was so charming. At the end he signed an autograph to me on a napkin I still have and wrote ”To Michaela whom I hope one day I will meet on stage in CARMEN” ( Michaela is a big role in Carmen for those who do not know the opera Carmen).

My name back then was Michaela. I have later changed it to Friederike which is one of the three names I have.

Years later in 1996 I was booked to sing in Carmen in Hamburg the role of MERCEDES and Placido Domingo was part of the Opera Week. One day we were collected by the same driver and we were chatting in the car and he suddenly looked at me from the side and said, you know what, I know you but the name isn’t right. It is not Friederike…. I WAS SPEECHLESS. I told him how we originally met and he remembered it immediately. I was really blown away that a man like him who meets so many people had remembered my face….We continued to have a great week performing and he gave me a private audition and we stayed in contact after that.

LM: You sang for the German team on the opening night at the London Olympics 2012, you received different prizes such as the Franz Grothe by GEMA and Robert Stolz Award and participated as guest star to German TV shows. Was there a moment in your life where you realized you became a famous singer? If yes, when?
SZ: Singing in front of 60000 people in a football stadium back home in Hamburg kind off made me aware that I am doing ok and certainly doing TV shows with over 8 million live viewers or to be chosen to sing alongside stars such as Domingo but I have never taken myself too serious. What I do take very serious though is my music. I am a big team player and never underestimated the team effort it takes to make a concert/event work so the Diva behaviour is just not me….

LM: I know you often participate in charity concerts and humanitarian events worldwide and the latest was just few days ago in Afghanistan; would you tell us something about this recent trip? Surely you were not alone, and Afghanistan is not the calmest or most peaceful place to land…
FK: It was almost a life changing trip. To sing for the troops has always been a desperate wish of mine to show my solidarity with our soldiers. The Germans will always struggle because of the 2nd world war and our troops unlike the UK or US troops receive very little if no support from their people at home. It is something that really makes me upset. I am not pro war-who would be, but the troops out there in Afghanistan are on a peace mission and to me first and foremost are PEOPLE. They are sons, fathers, mothers, daughters and they deserve to be respected for putting their life at risk on a daily basis to establish democracy, safety and peace across the world. 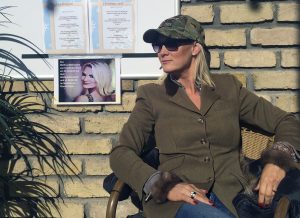 I have never come across more generous, sincere, kind, polite and wonderful people than in Camp Marmal. While I was out there we took part in a short training for roadside bombs and detecting devices that could potentially detonate. Even knowing I was safe while walking around there I was drenched in sweat by sheer tension and fear. I was killed several times over but only had to face the alarm tone while for the real soldiers it would have be an explosion that would end their life. It is sheer luck as one has no chance to know where the detonation devices are placed or if the car next to ones vehicle is going to explode being driven by another suicide bomber.

….While I was out there two US soldiers were killed by such bombs as was a German who died in a suicide attack in Kabul. We had his body on board of the plane flying us all back to Germany. I could not stop thinking about that poor guy lying below us so while high up in the sky I initiated a minute of silence and sang through he intercom on board “amazing grace’ for him to acknowledge his presence and to pay our respect to him. It is a moment I will never forget…..

I have deep respect for all our troops and feel huge gratitude for what they do.

SZ: You’ve performed on some of the most renowned opera stages. Is there a stage where you would love to sing but you have not had the occasion yet?
FK: Funny enough, it is just around the corner from me….The Royal Albert Hall. I love the building and atmosphere. My kids tease me as they both already have sung there on stage so yes, I have to get even!

SZ: You recently produced a charity CD with your friend and piano player, Prince Alexander zu Schaumburg-Lippe to support the up and coming UK singer and song-writer LOCKES; would you tell our readers what your plans are for 2015?
FK: I am starting in January 2015 on my new album which is being produced by Germany’s top producer Peter Hoffman and his young partner David Bonk who is an ingenious classically trained pianist and arranges the most beautiful music. It will be a classic/crossover CD with repertoire not yet sung or heard by anyone. Once the CD is out we will be doing a tour through Germany and hopefully Europe to follow.

SZ: I really want to thank you very much for your kindness and for the opportunity of this wonderful and deep interview. It is been an honor for me. Is there something you would love to add and say to our readers?
FK: There would be no artists were there not wonderful audiences around the world that wanted to hear us and support our music. So again, it is all about teamwork. I am not a person craving fame but to make people feel happy. Music touches me deeply and it lifts up my spirits. I have not always had happy moments and lost a brother at the age of 32 and a traumatic divorce but music has always seen me through it all and continues to gives me strength. If my singing touches people and brings them moments of happiness or gives them strength during hard times then that is what makes me happy. That is what I felt in Afghanistan when I sang for the troops….though these men and women out there have given me far more than I could ever give them. Thank you very much to you Simone and to Luxurious Magazine for the interview.

SZ: Thank you very much again Friederike for your time. I wish you all the really best for the future and in particular for your new projects.