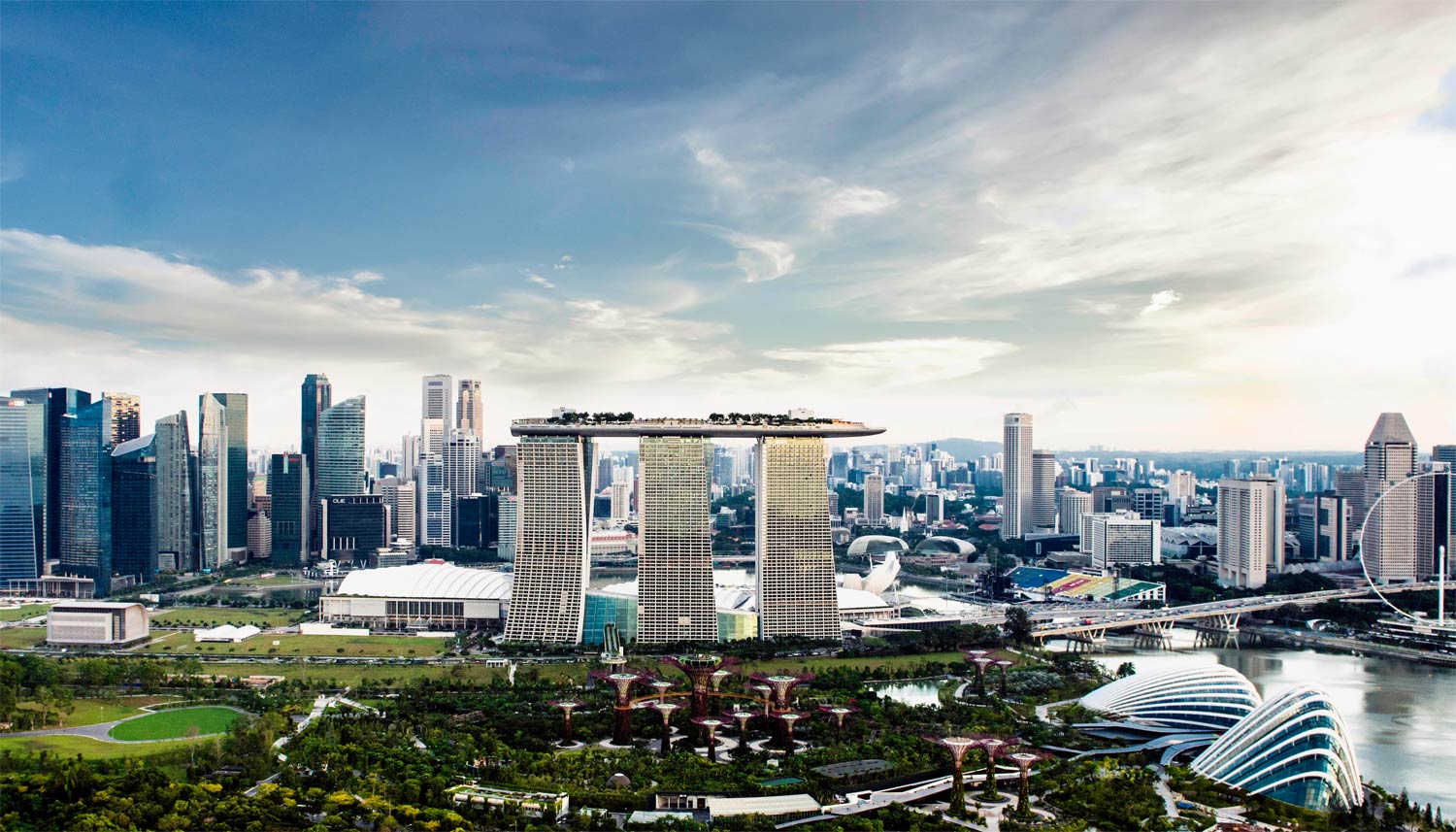 The Marina Bay Sands Singapore is a Triumvirate of Luxurious Shopping, Spectacular Entertainment and World-Class Cuisine. Ong Chin Huat checks in for a few days and is totally mesmerised by the sheer scale of this integrated resort and hankers to return for more of the same. 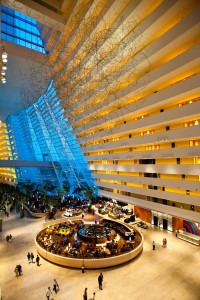 Checking into the tri-tower Marina Bay Sands in Singapore is akin to visiting a utopian city within a city all on its own. The sheer scale of its immense lobby impressed even the most jaded and world-weary traveller. Glancing up at the soaring atrium with the stainless steel art installation created by British artist Antony Gormley, is a breath-taking experience and this sets the tone for my entire stay.

The super sleek and fast elevators whisk me up to my room – a Deluxe Room in Tower 1 at Marina Bay Sands in soothing earthy colours and comfy décor. With the wall to ceiling glass windows which lead out to a balcony, I had the perfect view of the Gardens by the Bay with their Supertrees and the futuristic-looking glass biomes – the cooled conservatories which comprise the ‘Cloud Forest’ or ‘Flower Dome’. Come evening, it was quite a sight to see the Supertrees structure all lighted up and twinkling with the Singapore Straits in the background.

On the night we arrived was the premiere of the hit musical Mamma Mia! and everyone was excited to watch this highly anticipated musical inspired by the toe-tapping songs of ABBA. A delicious pre-show dinner was arranged at Osteria Mozza, the authentic Italian restaurant created by celebrity chefs Mario Batali, Nancy Silverton and winemaker Joe Bastianich. With a menu comprising fresh homemade pasta, meats, seafood and game dishes cooked on a wood-burning grill, as well as imported buffalo mozzarella, burrata and burricotta cheese, this was one heavenly meal and a welcome introduction to the mouth-watering and delicious fare on offer at the Marina Bay Sands. When the time came, we made our way to the MasterCard Theatre just across the restaurant for the premiere of Mamma Mia! It was certainly a wonderful experience and put everyone in a happy and light-hearted mood with hit songs like ‘Dancing Queen’, ‘Take a Chance on Me’ and ‘The Winner Takes All’ still reverberating in our heads long after the last curtain call. 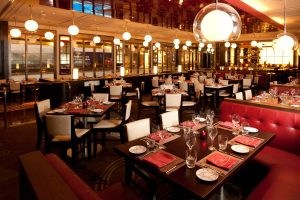 The next morning, breakfast at RISE, Marina Bay Sands’ all-day international buffet restaurant proved to be a fun affair, with its enormous spread of local and international offerings. If people-watching is your thing, then this is the pace to head to as the sheer number of guests having their first meal of the day makes it an exciting place to see and be seen, despite the early hours. Lunch at Pizzeria Mozza was a much anticipated affair as this gem of a place has earned itself a solid reputation for its hand-crafted artisanal pizzas which are made in wood-burning pizza ovens on display in a lively open kitchen. A replica of its celebrity-laden Californian outlet, Pizzeria Mozza has become a hip and happening place in Singapore, with its casual and bustling ambience and upbeat rock music.

We started with Antipasti of Calamari al forno with fagioli and oregano and cauliflower fritti with spicy mint aioli which was just enough to whet our appetite for the other dishes. Nancy’s chopped salad with radicchio, cherry tomatoes, salami, aged provolone, ceci and pepperoncini was light and refreshing while the pièce de résistance, the two pizzas – Margherita with mozerella, tomato and Sicilian oregano and fennel Sausage, panna, red onion and scallions was really out of this world and was one of the best pizzas I had ever tasted. 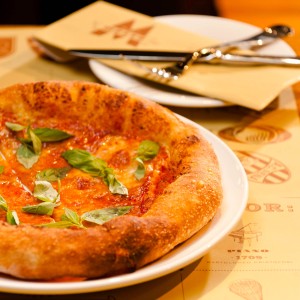 The best-seller Butterscotch Budino with Maldon sea salt and rosemary pine nut biscotti was the perfect sweet end to the lunch. After such an indulgent lunch, what better way to help digest our food and to burn off some extra calories than a workout which doesn’t cause any pain – shopping! When it comes to retail therapy, The Shoppes at the Marina Bay Sands is unrivalled. With an extensive offering for any male sartorial needs, luxury brands such as Louis Vuitton Island Maison (housed in the Crystal Pavilion on the water) to Kenzo, Churches, Dunhill, Brioni, Burberry, Dior Homme, Tom Ford and Prada, are only a few of the designer names that can be found at The Shoppes. If your card has the muscle, then you can flex it as far as it goes here. There is no item that doesn’t arouse any desire when it comes to luxury, fashion or highly coveted goods. This newly minted Men’s Collection with an array of classy men’s stores gives any dapper gentleman all the accoutrements he needs to step out in style.

After all that shopping, TODAI, the seafood and sushi restaurant featuring international cuisine as well as local Singaporean favourites was the obvious choice to dinner. Special mention has to be made for the succulent Alaskan king crab and fresh oysters which is a house speciality and which proved to be a big hit, as were the different types of California rolls on offer. The sheer variety of food on offer made it difficult to choose what to put on our plate and as usual, we over-indulged. To end the night, a river cruise around the Marina Bay area as well as along the Singapore River was a nice day to end the evening. 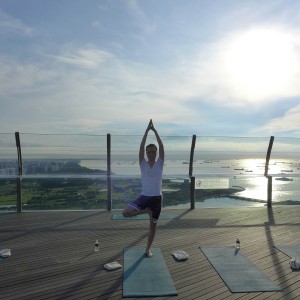 Making it to the Sunrise Yoga class at 7 am wasn’t easy but I was glad I did as it was an experience to savour. Doing the sun salutation and tree pose facing the rising sun at the SkyPark Observation Deck atop the Marina Bay Sands is an experience not to be missed, no matter how hard it is to drag yourself out of bed. I felt refreshed and rejuvenated after the yoga class and also quite hungry. Just a few steps from the Observation Deck is The Club where we adjourned for breakfast. With the sweeping views of Singapore and its intimate and less hectic ambience, it was exactly what was needed after a yoga class.

After indulging in two favourite pastimes, namely shopping and eating, it was time for some culture. The Marina Bay Sands complex has artwork built into its structure and is scattered all around – from the atrium of the lobby to the exterior of the three towers, there are 11 large-scale art installations specially commissioned by the Marina Bay Sands from eight internationally renowned artists such as Ned Kahn, Zhan Wang, Anish Kapoor, Sol LeWitt and James Carpenter.

As my trip coincided with the Christmas season, there was a Christmas tree and festive lighting up ceremony with specially flown in Sands ambassador, David Beckham. With a delicious dinner held at the sumptuous and elegant db Bistro Moderne – celebrity chef’s Daniel Boulud’s temple of fine dining and culinary delights, it was the perfect way to end this wonderful and exciting experience in the iconic integrated resort.