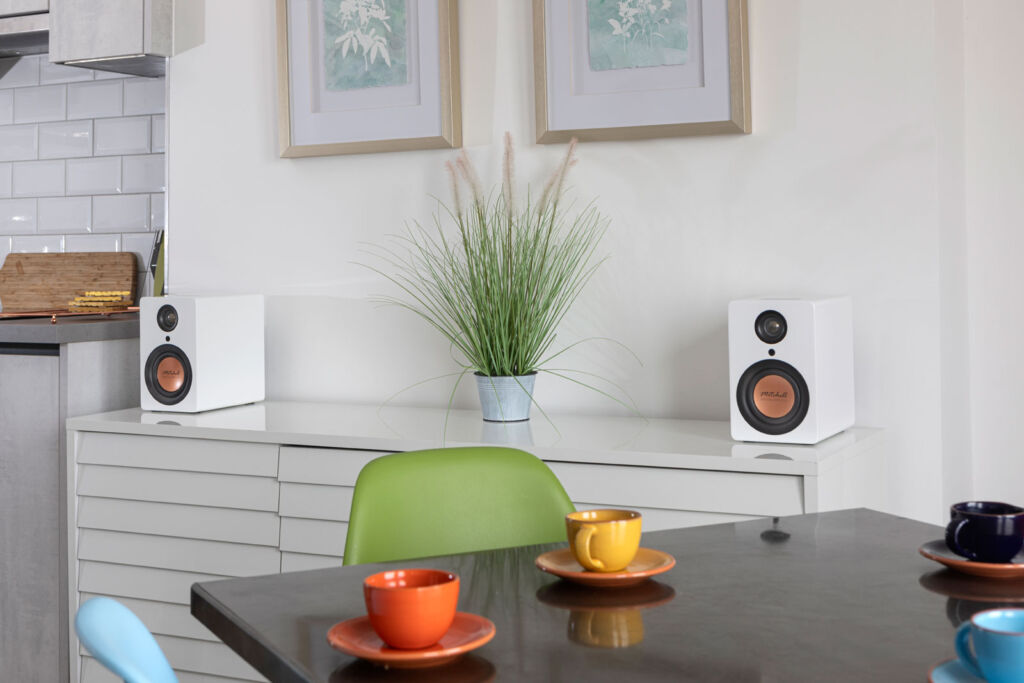 Over the past few months, I’ve had the absolute pleasure of experiencing the Mitchell Acoustics’ uStream One Bluetooth speakers, which has helped me rediscover music and appreciate it the way the original musicians envisaged.

Music is an incredible thing. It can heighten emotions, bring joy, or even sympathise with your feelings through words and sounds. Music is universal, and although every country has its specific language, music transcends this and can be enjoyed and appreciated by all. It is such a universal language that it was even sent out into space on golden records onboard the Voyager Spacecraft in 1977 as a greeting to other civilisations.

Over the past decade or so, music has become far more accessible thanks to rapid advances in technology. However, something is missing when you listen to a masterful track on a mobile phone or through a television or computer monitor. You need a great set of speakers to hear music in the finest way, but frequently the very best speakers are priced out of reach of the majority, that is until Paul Mitchell popped on his thinking cap.

My first introduction to stereo sound was with my father, Michael. Sometime back in the 1970s, I recall him excitedly calling me into the car, telling me to sit in the front passenger seat while he played David Essex’s ‘Rock On’. He was amazed that different sounds were coming out of the car’s speakers and wouldn’t let me leave until he knew I fully appreciated this incredible music track as much as he hid. Although music was a major part of my life for the next few years, like many others, I pretty much left the world of stereo sound to take the road of ‘more convenience’.

I needed something straightforward to bring me back, and an English businessman just so happened to have the very thing. That man was Paul Mitchell, the founder of Mitchell Acoustics. Paul knows more than a thing or two when it comes to music; for the first part of his working life, he was a globe-trotting musician and even today still gets involved in major music projects and collaborations. 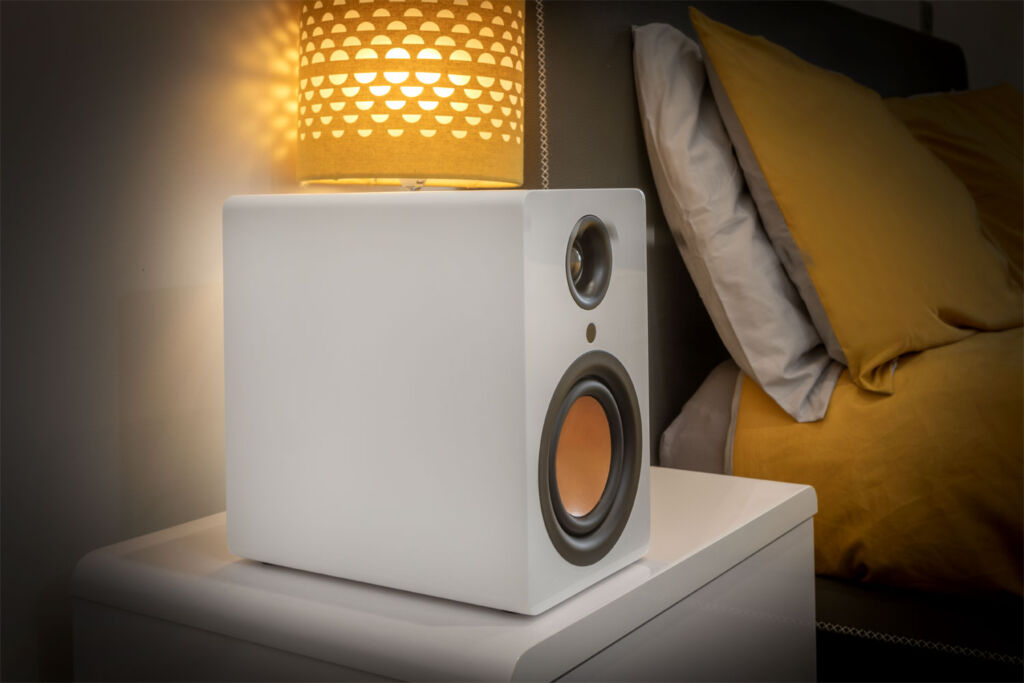 When I was invited to review the Mitchell Acoustics uStream One speakers, something which in hindsight was now obvious dawned upon me. I, like so many others, had embraced what we consider here as the laziness of using a mobile phone and computer wizardry for pretty much everything, and this included listening to music. Although the uStream One speakers are Bluetooth enabled, making them ideal for use with a mobile phone, the majority of the music I had in my playlists consisted of over-processed tracks that had been manipulated and filtered to the point that they’d lost much of their original nuances. 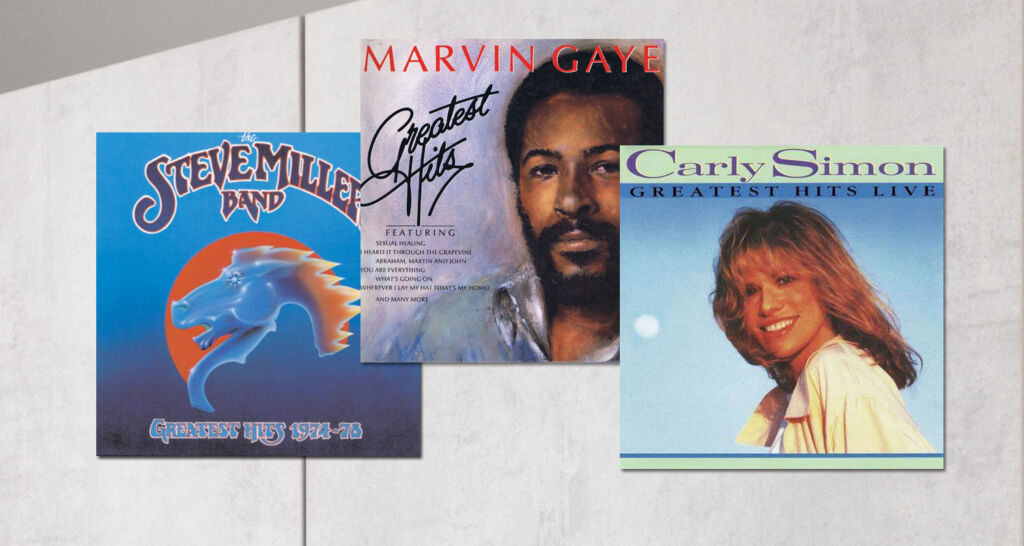 I needed something to help turn back the clock to when music was an essential rather than a convenience. Paul Mitchell’s uStream One speakers were just the thing and offered me the opportunity to rekindle my passion for Bing Crosby’s mellifluous voice and the excellence of artists such as Barbra Streisand, Marvin Gaye, the Mama’s & Papa’s, Matt Monroe, the Steve Miller Band, Carly Simon, Neil Diamond, Frank Sinatra, Nat King Cole, Roy Orbison, the Electric Light Orchestra, Billy Joel and many more.

Before we get to the technical aspects and quality of the speakers, I still needed to get something extra to pair them with aside from a high-end mobile phone and a cassette deck with a handful of tapes. The first thing I purchased was an ION Bluetooth record player, but this I felt was somewhat unfitting for the uStream One speakers. So I decided to buy an additional record player, the Audio-Technica ATLP60-ABT. In addition to this, although I still had my record collection, I felt that some newly pressed vinyl was necessary so I ordered three brand new albums by Dizzee Rascal, Madness and The Streets.

I found pairing the Audio-Technica record player to the speakers incredibly simple. With the equipment paired, I placed the needle onto the Madness Greatest Hits album, and the brief initial crackle from the needle on vinyl sent shivers down my spine, bringing back a flood of emotion along with locked-away memories of happier and simpler times. That brief simple noise was all it took; I was hooked, so much so that I didn’t feel that record players, phones and cassette tapes were enough. I wanted to, as they say, “Go the whole hog”, so it was off to a couple of music-specific auctions.

After some frantic bidding at the auctions and paying well above the initial estimates, I’d become the owner of two rare and pristine eight-track players along with a huge collection of tapes featuring many of my all-time favourite solo artists and bands. I now felt that I had enough in my arsenal to test and appreciate Mr Mitchell’s creation fully.

Now that it is established, I am once again back in the ‘music appreciation society’; we should take a closer looker at the subject of this article, the Mitchell Acoustics uStream One speakers. 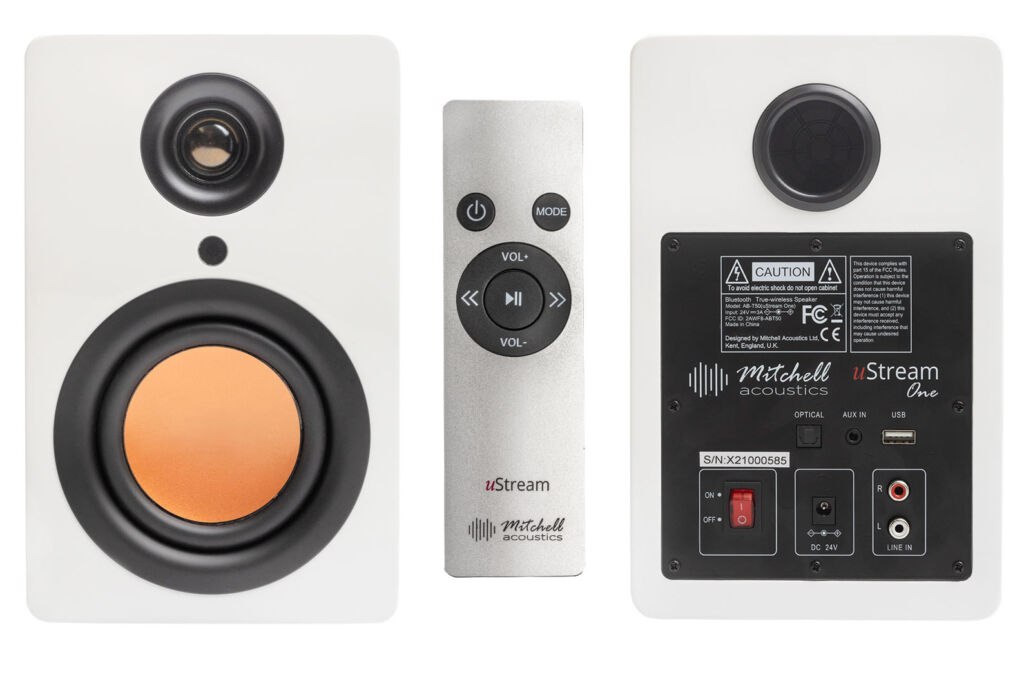 About the uStream One Speakers
The speaker set consists of two identical stereo speakers that are available in two colours, high-gloss piano black or piano white finish and an easy to use remote control. In addition to the outstanding sound they offer which we will get to a little later, what makes these speakers so brilliant is the latest True Wireless Bluetooth technology inside them. 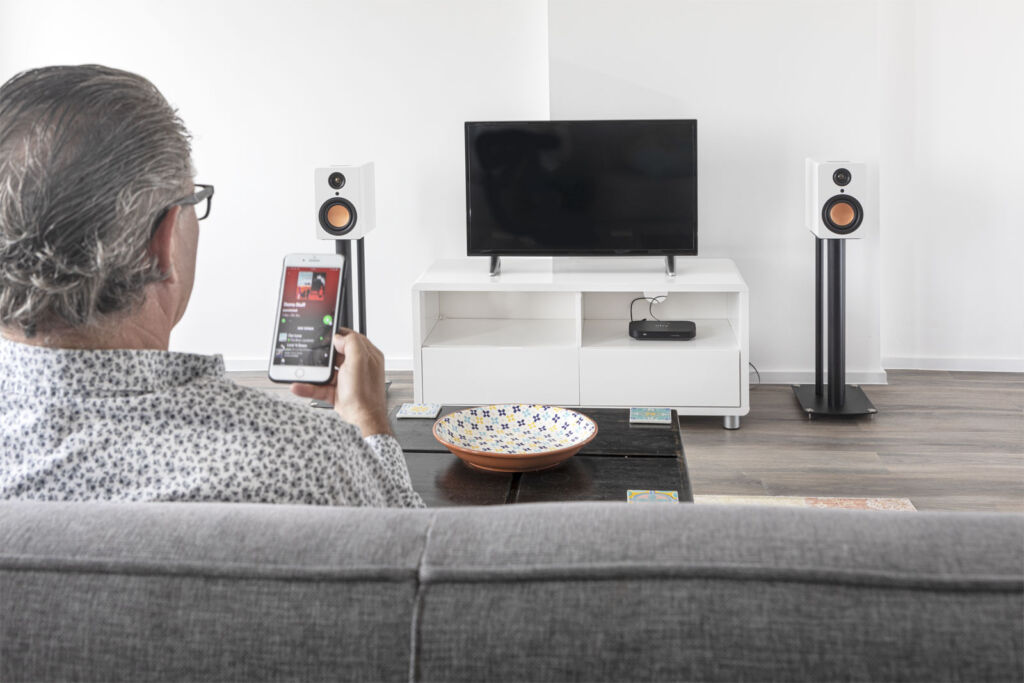 As I mentioned earlier, pairing them to the record players I had purchased was super simple. With Madness now blaring in the background, it dawned upon me that I was in front of a 4K Android-powered TV with Bluetooth; could I pair this to the speakers as well? Admittedly, it did take a bit of fiddling due to my all too frequent habit of being too lazy to read the instructions inside the box. However, following a call to Mitchell Acoustics and a brief chat with Paul Mitchell, I had the cinematic backtrack of Will Smith’s ‘I am Legend’ blaring out of each speaker! 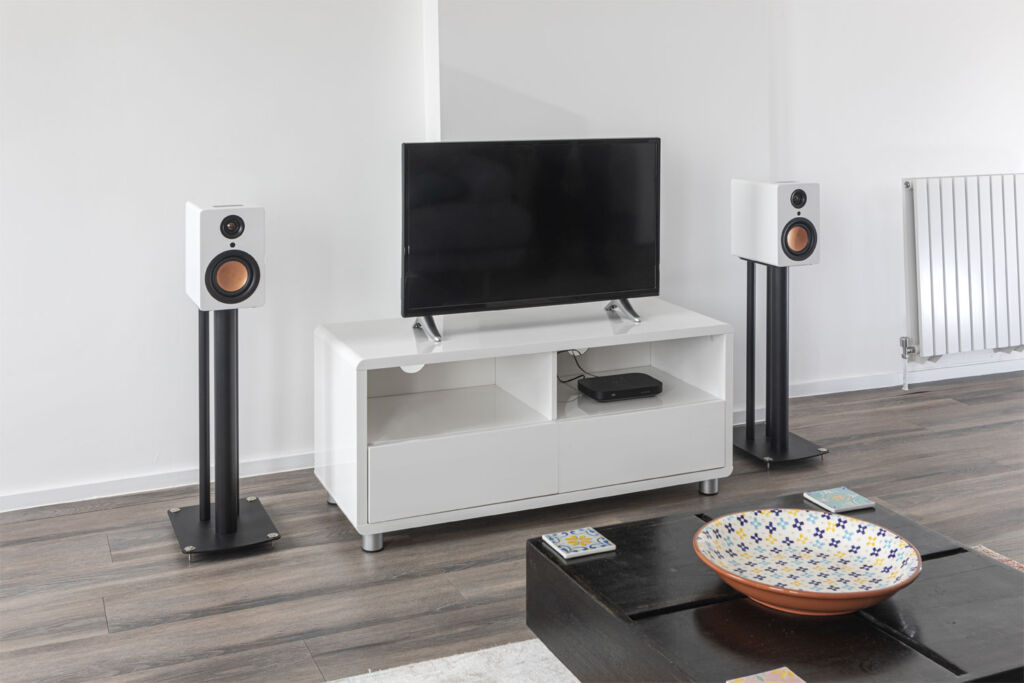 The pairing process is remarkably simple. Essentially one of the speakers acts as the master and the second speaker a slave. You pair your preferred device to the master and then connect the second speaker to the master via the touch of a button, and that’s the one thing I missed when pairing it to my TV set! What makes these speakers different from other high-end speakers is there are no messy and restrictive connecting cables. Imagine that, being able to position speakers anywhere you want as long as you have a plug socket for each one.

I was able to position my set on either side of a large room without any fuss, and the difference between listening to a source directly in front of you when compared to a sound filled room was astonishing. It gives you the feeling you are actually at a concert. With my phone also paired, I popped onto YouTube to watch and listen to Jeff Lynn’s Electric Light Orchestra concert in Hyde Park, and it felt like I was in the crowd.

Getting the speakers to work with my 8-track players was just as simple. Although the players were, as expected, devoid of any modern technology, this wasn’t a problem as there are traditional audio cable inputs on the rear of the uStream One Speakers. My enjoyment when listening to 8-Track tapes through the speakers was somewhat hit and miss.

This was no fault of the speakers, more so the rather worn-out tapes I was trying to play from the late 60s and early 70s. However, I did find some fully-working pristine gems, including a tape of Roy Orbison’s greatest hits tapes, and I’ll admit, tears did form in my eyes. 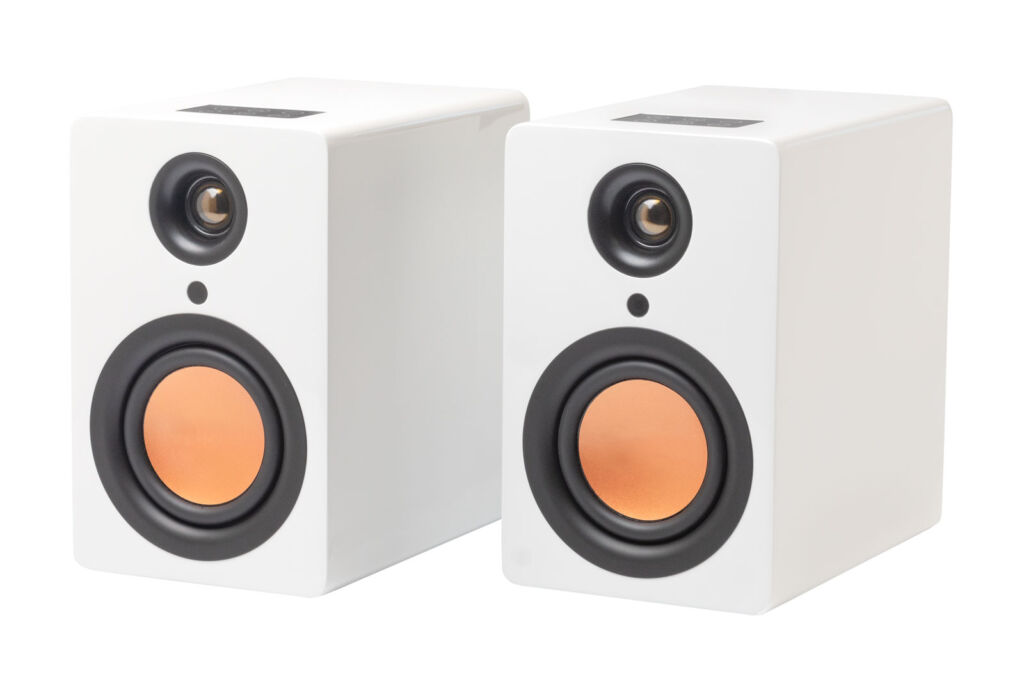 During my technical advice call with Paul Mitchell, he did mention that he’d gone a little overboard with the quality of the components inside his speakers. Early on, he made the decision that he wanted the sound quality to be comparable with much more expensive high-end systems and through this writers ears, he’s achieved his goal.

Over the past decades, I’ve not been shy when it comes to purchasing high-end speaker systems, all of which have now been gifted to friends. I’ve had solid crystal speakers from a French company called waterfall, sets from Bowers & Wilkins, alongside an assortment of others from well known high-end brands. I must admit that the speakers were purchased more for show and used very infrequently. However, with the volume turned up, the uStream One Speakers, through my ears, were more than a match for them and considerably easier on the wallet.

Cards on the table, I am not an audio expert. For me to come back to enjoying music the best way possible, I needed something extremely simple to use that produced great sound quality. The uStream One Speakers hits both these marks. 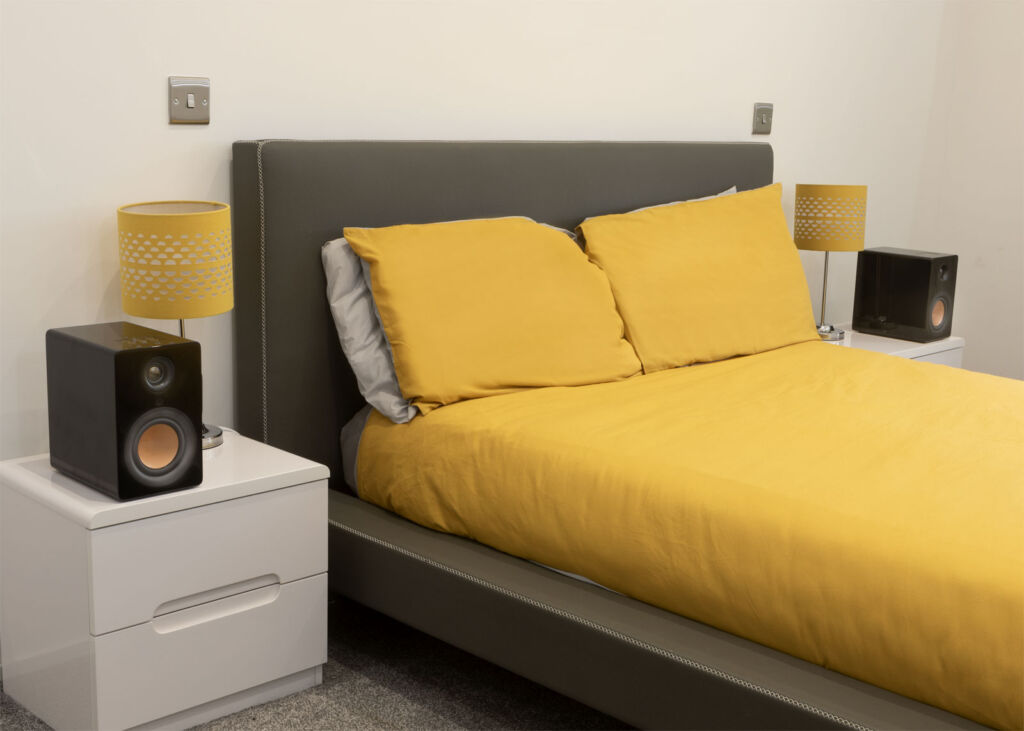 The reason for the speakers excellent sound quality is down to the company’s proprietary designed woofer with metal alloy diaphragm, which is said to be capable of delivering amazing low frequency (bass) sound smoothly and with great control. In addition to this, the speakers contain high frequency (treble) tweeters, which until now have been the domain of systems sold at a much higher price.

Final thoughts
People often say that music is food for the soul; if this is accurate, then Paul Mitchell’s uStream One speakers are, in my opinion, the most delicious condiment. I thought the sound produced by the speakers was excellent and allowed me to properly appreciate the quality of many of my favourite artists, many of whom are sadly no longer with us today.

The Mitchell Accoustics’ uStream One speakers allows you to separate the ‘wheat from the chaff’. Many contemporary music artists come across as incredible thanks to modern technologies such as auto-tuning and sound manipulation software. I think that if they were honest with themselves, most would know, deep down, they don’t have the better of the legends of yesteryear, and Paul Mitchell’s speakers showed me how obvious that gulf is from the comfort of my own home.

Mitchell Acoustics uStream One – Where and how?

In addition to the devices we’ve mentioned in the above feature, the uStream One speakers can also be used in conjunction with the Alexa app and Google Home, allowing you to speak instructions to your preferred device, such as “play me a track by…” and hearing it come through the uStream speakers. You’ve read how thrilled we were with the speakers and how we felt they are a match for the best names in the industry when it comes to quality of sound; what might surprise you is their low price. The UStream One speakers are priced at £499.00 per set, considerably less than its competitors. For more information on the speakers and to purchase them online, please visit https://mitchellacoustics.co.uk.

Inputs:
The speakers have two RCA analogue inputs covering all potential input needs. In addition to this, they have a 3.5mm line-in jack for MP3 players or other portable sound sources. They also boast an optical digital input that allows digital sources to be connected and a USB-in for music stored on a drive etc.

Roswell 75: The Final Evidence Seeks to Uncover What Really Happened