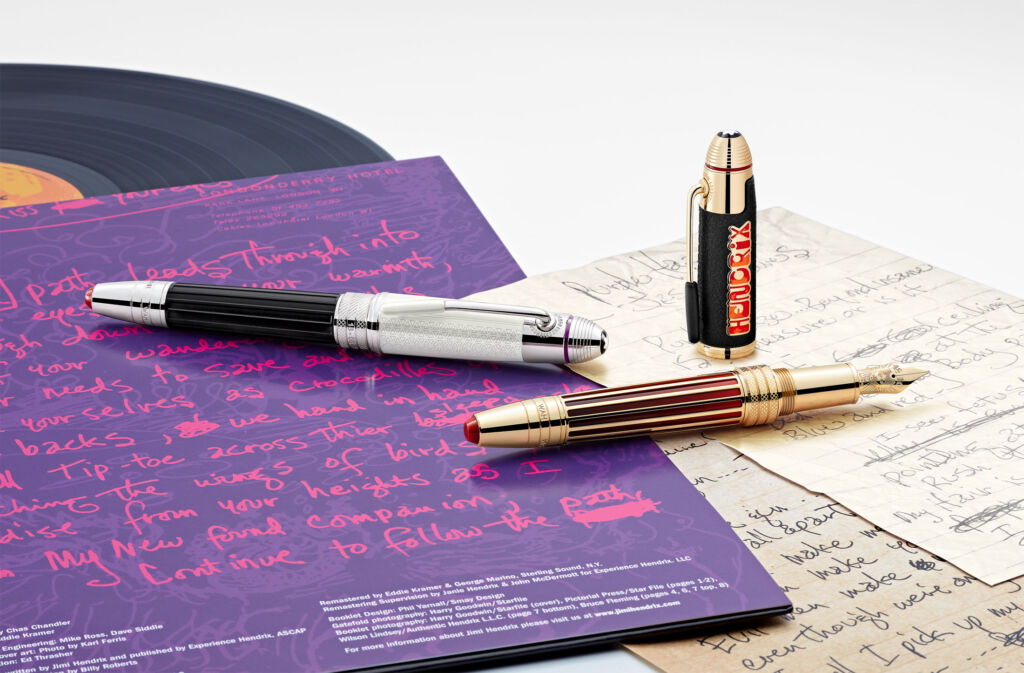 Following in the footsteps of the likes of Elvis Presley, Enzo Ferrari and James Dean, Jimi Hendrix is the latest icon to join Montblanc’s Great Characters Edition series, a collection which celebrates the life and achievements of eminent figures who have shaped world history. Simon Wittenberg finds out more.

James Marshall ‘Jimi’ Hendrix, who died in 1970 at 27, was widely recognised as one of the most creative and influential musicians of the 20th century. Even though his career spanned just four years, he reimagined the possibilities of the electric guitar and became renowned for his out-of-this-world sounds and exceptional technical skill.

Jimi Hendrix rose to fame in the 1960s rock ‘n’ roll era and gained legend status, as he produced almost never-before-heard noises from the electric guitar whilst championing a message of peace and love with his music.

In tribute to the famous American guitarist and a music idol of an entire generation, Montblanc has created three limited edition Great Characters Jimi Hendrix pens, with designs which recount the story of an exceptional artist who left a permanent stamp on the music scene. 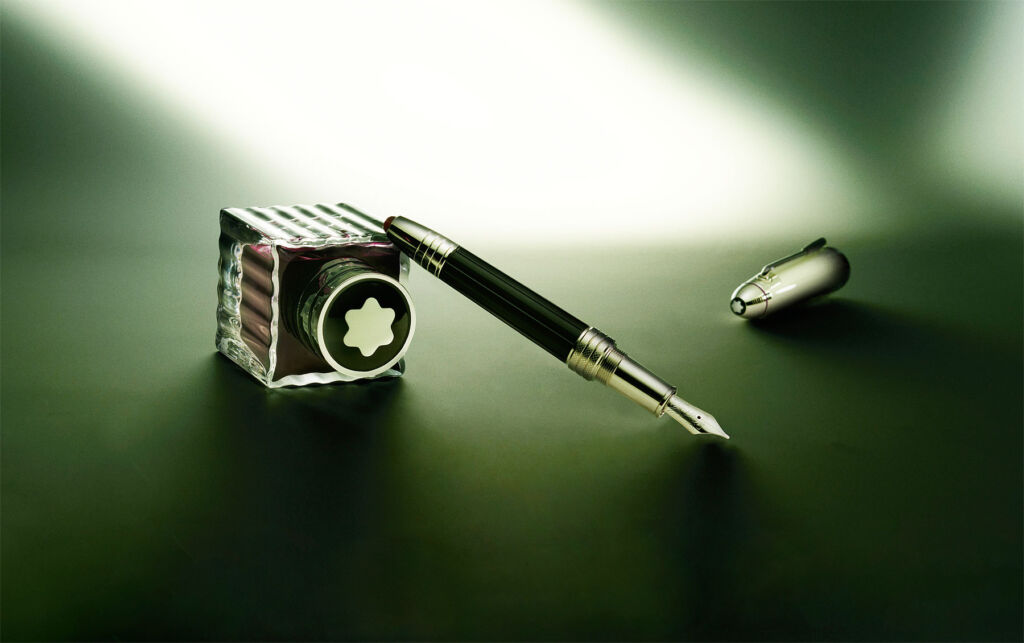 The tremolo bar, a feature that was at the heart of this star’s personal sound, has been incorporated within the shape of the platinum-coated clip, covered in precious cream-coloured resin at the tip. The artist’s debut album, titled “Are You Experienced”, furnishes the clip top as the pièce de resistance.

The “18-06-1967” inscription on the platinum-coated barrel ring harks back to Jimi Hendrix’s spectacular performance at the Monterey Pop Festival during the “Summer of Love”, while the ring’s surface texture is a nod to the connecting end of a Fender guitar cable. Hendrix loved experimenting with sound effects using the wah-wah pedal – an electronic device used to manipulate the sound of an electric guitar.

The cone has therefore been imprinted with the word “WAH”, whilst the red precious resin inlay at the end of the cone is synonymous with the colour of the pilot light of a Marshall Super Lead amplifier. The cap top is crowned with the renowned Montblanc emblem, whilst the handcrafted and rhodium-coated Au 585 solid gold nib is decorated with a pictorial representation of the guitarist. 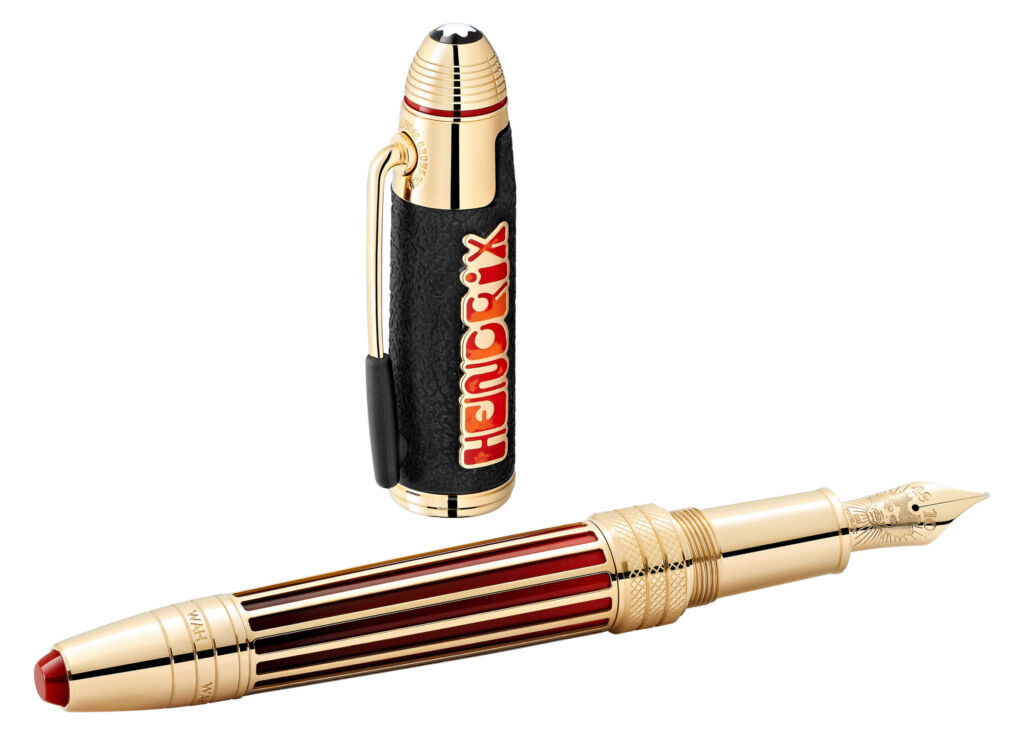 The metal plate with lacquer inlay on the fountain pen’s cap (£3,245) is based on a famous logo from Jimi Hendrix’s career, whilst the cap’s textured black surface reflects the musician’s love of the Marshall Super Lead amplifier. The yellow gold-coated tremolo bar clip is covered in precious black resin at the tip. The title of the famous album Electric Ladyland is engraved around the top of the clip of this stunning writing instrument.

The date imprinted on the yellow gold-coated barrel ring, “10-05-1968”, refers to another significant performance by Hendrix at the Joshua Light Show in New York City, USA, made famous by its pioneering liquid light effects. The yellow gold-coated cap top features a ring in precious red lacquer, and the “Purple Haze” finger positions are embossed on it.

The degradé lacquer on the barrel, which fades gradually from red to black, is in keeping with the look of the album cover – as are the bold stripes of the yellow gold-coated skeleton. The precious red resin inlay at the end of the cone is modelled on the pilot light of a Marshall Super Lead amplifier. The guitarist’s portrait is engraved on the handcrafted Au 750 solid yellow gold nib. The Jimi Hendrix Limited Edition 1942 is also available as a rollerball pen priced at £2,930. 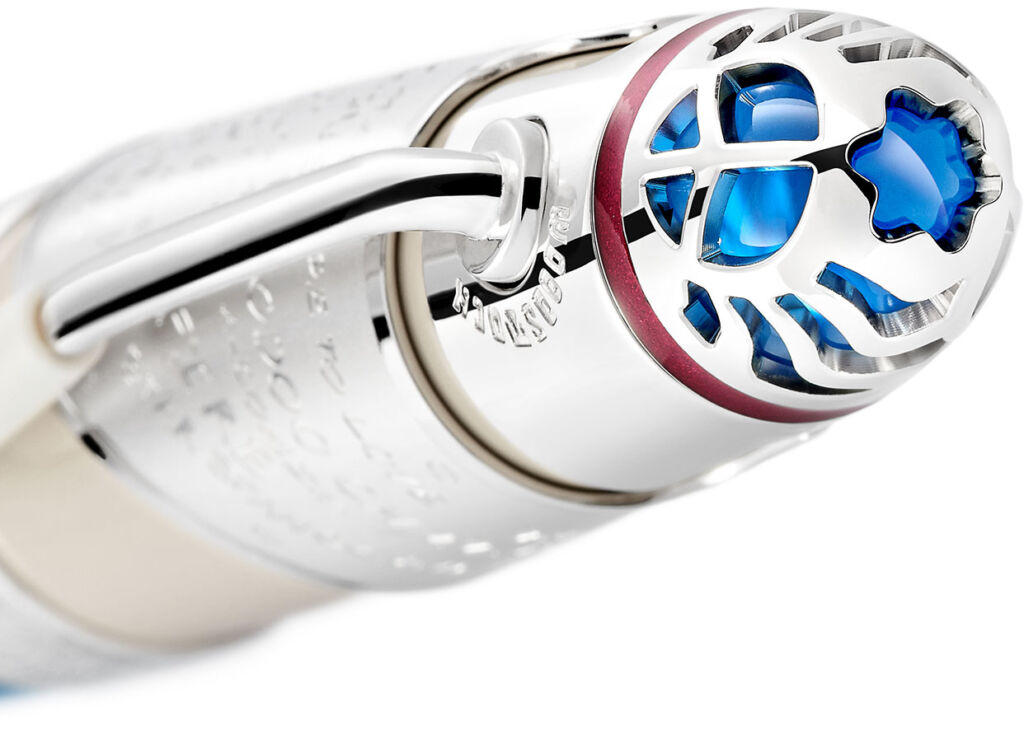 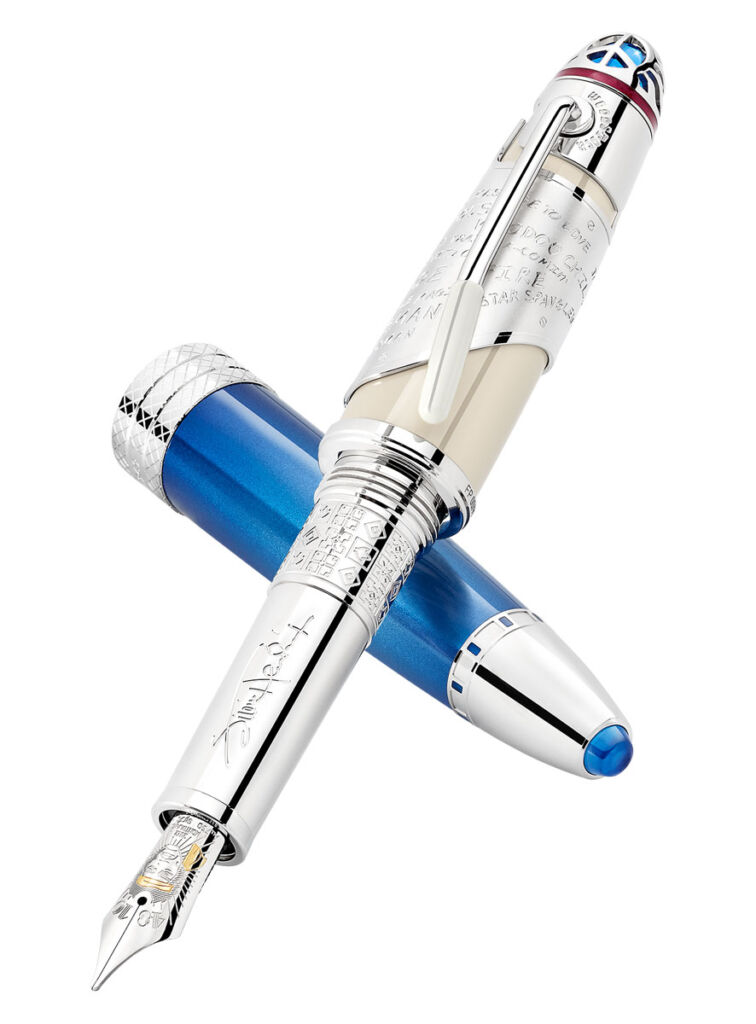 The design of this fountain pen, costing an eye-watering £33,500, points to the Woodstock Festival of 1969, one of the standout concerts in Jimi Hendrix’s career, as well as the electric guitar, the instrument that gave voice to his musical vision, and became an extension of the musician. Cream-coloured lacquer is used on the cap to mirror the look of the Fender Stratocaster guitar Hendrix played at the festival, whilst an engraved Au 750 solid white gold plaque is etched with the names of the songs from his Woodstock set.

The cap top is characterised by a skeletonised Au 750 solid white gold overlay carved out with the peace sign and the Montblanc emblem to reveal the blue transparent dome underneath. The lacquer ring beneath the dome is inspired by Hendrix’s hot pink headband on stage that August day in Woodstock, New York, while the name “Woodstock” is imprinted around the top of the clip.

Hendrix’s ability to reinvent music and sound, as well as his habit of swivelling right-handed guitars around to play left-handed, led designers to conceive a functional feature of the writing instrument: instead of removing the cap to reveal the nib, the owner unscrews the barrel to write. As a result, what appears to be the cap top actually serves as the cone, and vice versa.

The tremolo bar that Hendrix used so extensively to engineer his soul-stirring sound inspired the shape of the palladium-coated clip, which is dressed in precious resin at the tip. His portrait is engraved on the handcrafted Au 750 solid bi-colour gold nib, while the Au 750 solid white gold forepart has been etched with his signature alongside the same geometric pattern that decorated Hendrix’s guitar strap at Woodstock. 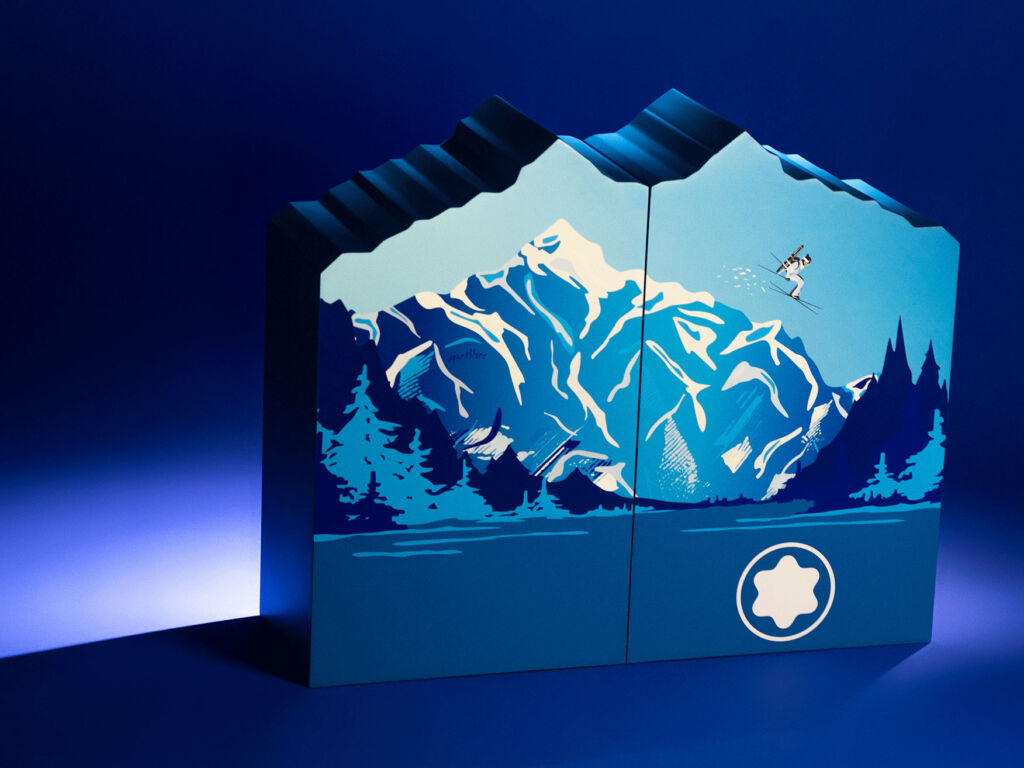 Montblanc unveils the Limited Edition Happy Holiday Calendar and Cartoleria selection for the 2022 festive season
In addition to the new writing instruments, Montblanc has also released a Happy Holiday Calendar (costing £4,400 on Montblanc.com or in boutiques worldwide) and a Cartoleria selection for this year’s festive season. The advent calendar is limited to only 100 examples and draws its inspiration from the Mont Blanc mountain in the Alps. There are 24 windows to open, with gifts ranging from leather goods to writing instruments, plus six products from the cartoleria selection, which are exclusive to the calendar. 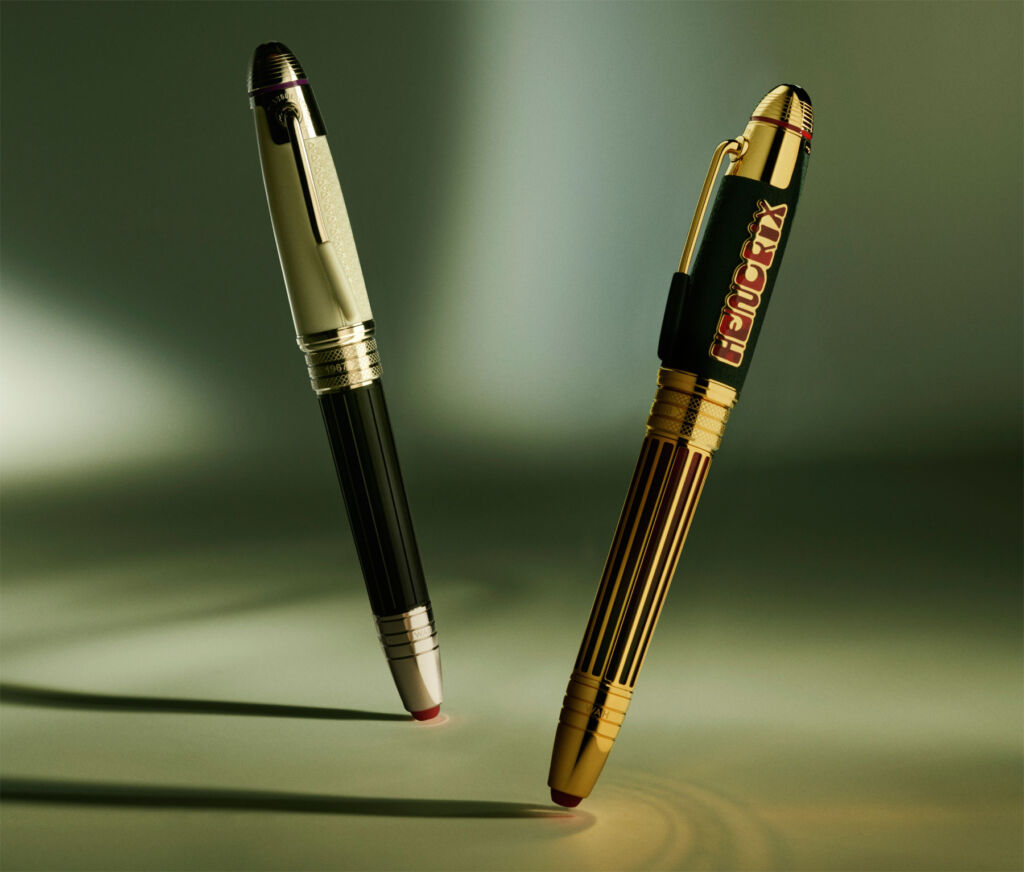