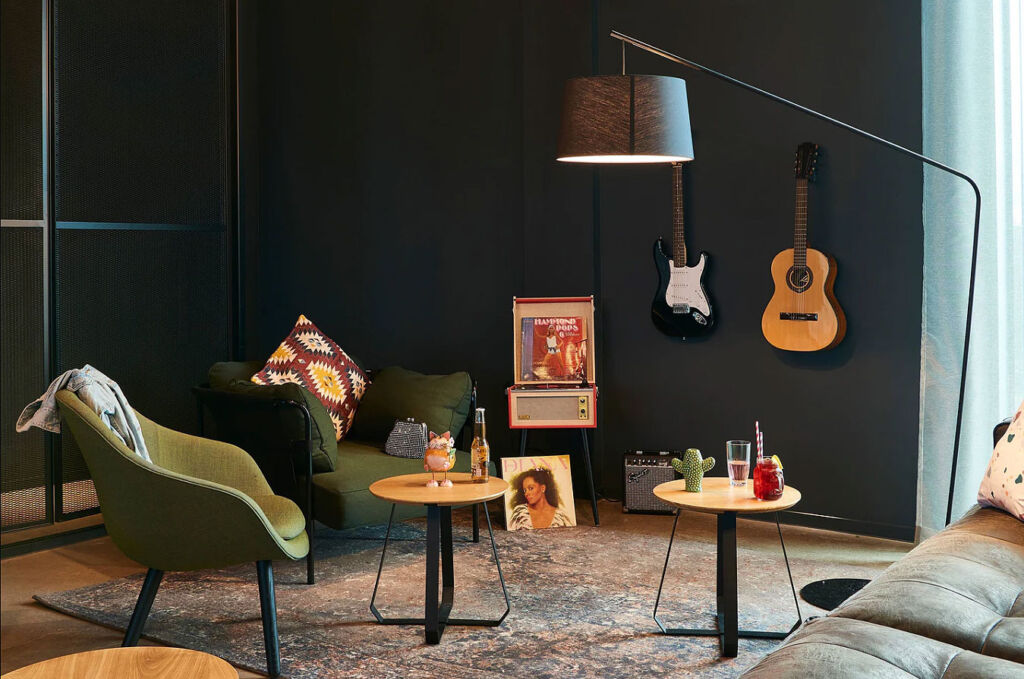 Hotels come in all shapes and sizes, From top-end luxury to basic functional ones. Moxy Chester sits somewhere in between. It’s stylish, edgy, playful and a little quirky. Luxurious Magazine’s Sabi Phagura checked in to check out what it’s all about.

When Moxy Chester flung its doors open in November 2020, it was hardly the grand opening they had anticipated. Marred by lockdown restrictions, the stylish and playful hotel located by the canalside received just a handful of masked guests. But two years on, they are seeing an influx of customers coming through their doors who are eager to explore the brand that celebrates nonconformity and open-mindedness.

No one likes a lengthy check-in process after an arduous journey, and the one here is swift. Casual and super easy – at the bar, which is the focal point of the lobby – and a quick run-down of how the hotel operates, and I was in my room within minutes. 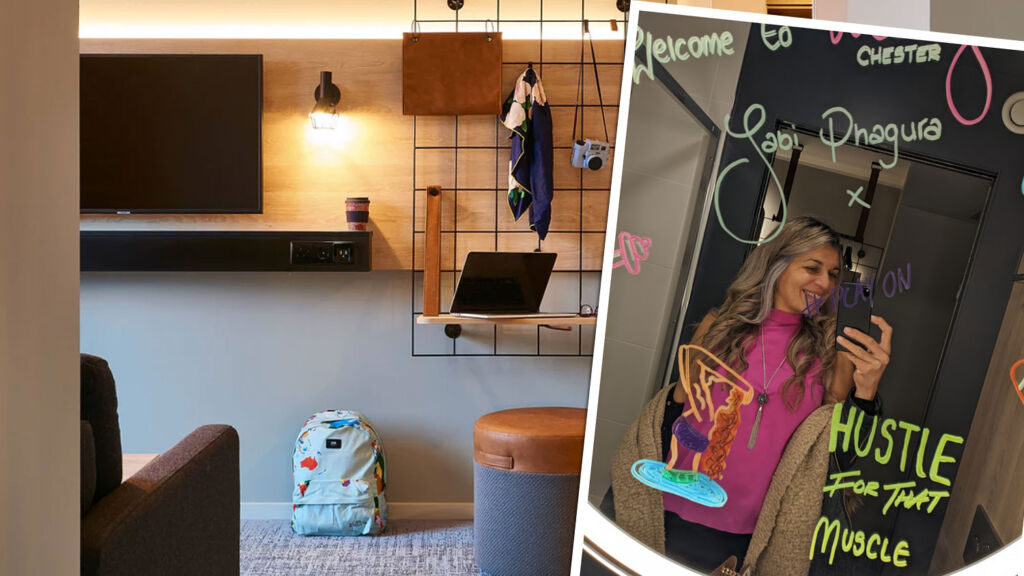 A choice of three-room categories (I was checked into the Moxy Sleeper), all are minimalistic designed understated rooms. But the personalised message on my bathroom mirror caught my attention before I even had a chance to put the luggage down. My name, painted in colourful markers together with funky images of a fitness fanatic (aka me), was so quirky and had a special personal touch. 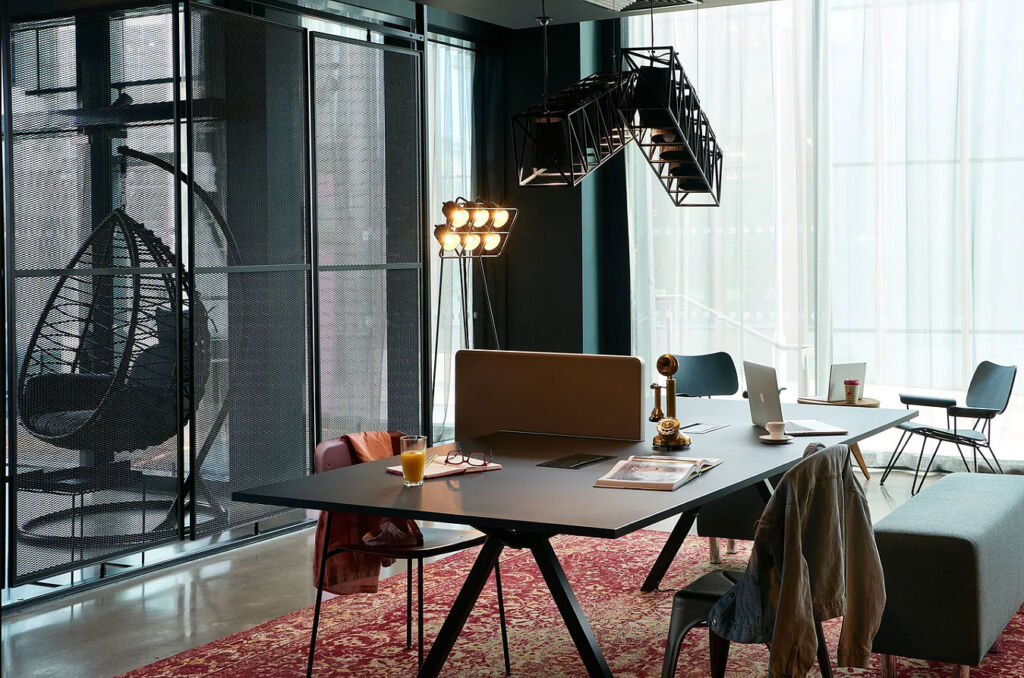 The Moxy Hotels brand was born out of a vision by operator Hotel Co. 51, who wanted to offer a stylish place to stay with understated bedrooms, functional spaces and, above all, affordable. And there’s no need to leave your four-legged pets at home with their dedicated pet-friendly rooms. With 16 Moxy hotels scattered around the country (two of which are managed by another operator), the brand is growing fast, with new openings earmarked for next year. 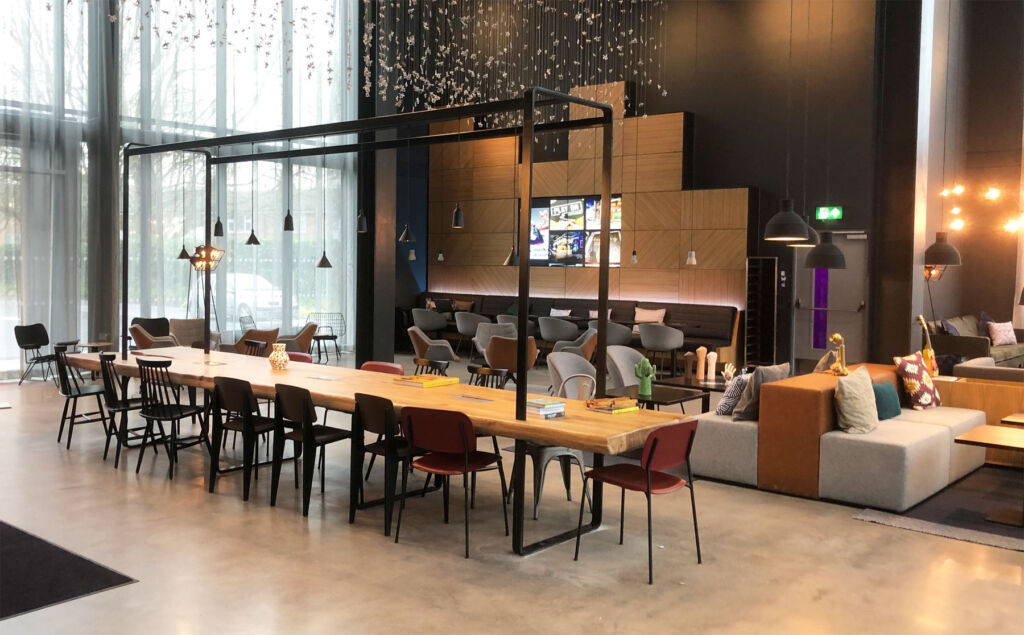 Open planned spaces
The 186-bedroom Moxy Chester is most certainly playful at heart, with an open lobby layout dotted with contemporary furniture, wall art, large writing walls and a 56-inch wall-mounted television for work and play. And in the age of social media, this is an Instagramable area to share on your platforms. 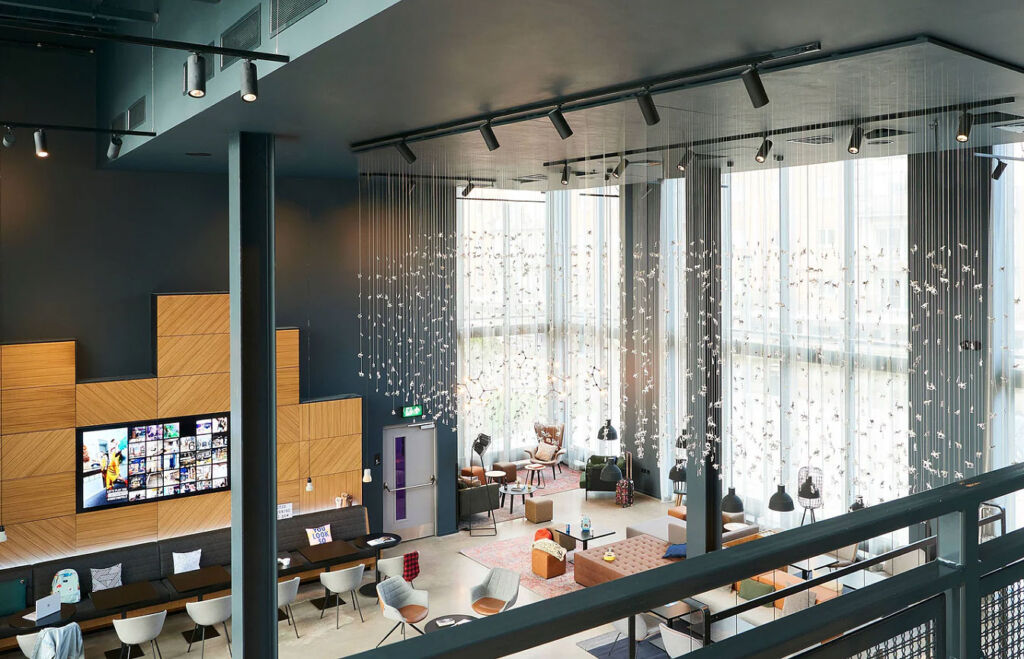 The mezzanine floor provides a space from where you can plug in and do some work or plug out and socialise. It’s a tale of two halves, office space and meeting rooms can be found on one end of the floor while a games area equipped with a pool table is on the other. It’s also an intimate space to catch up with friends or a meeting away from the footfall on the ground floor through the revolving automatic doors.

It was the perfect place to have a cheese and beer tasting away from the crowds. It was like Neil Chesters, the founder of Chester Beer Company, was in my living room telling me all about this golden liquid.

Created in 2020 during the lockdown, Neil concocted this low-intervention craft beer made with hand-malted grain, water, locally-sourced whole leaf and nothing else. Neil said it’s the perfect recipe to dodge a hangover should you overdo it. The various beers and ales were paired with cheese from The Cheese Shop to bring out its flavour. It certainly got the appetite revving.

Food
Moxy Chester provides food around the clock, from self-service breakfast to snacks and drinks throughout the day. But for something a little substantial, you will need to head out. We dined at Siam Thai & Teppanyaki – a stone’s throw away from the hotel.

Few dining experiences can rival the theatrical display of a Teppanyaki restaurant, and this one was no different. There are not many other places where you witness the chef wielding a dagger-like knife just two feet away, skilfully slicing and dicing his way through a myriad of vegetables, potatoes, meat and fish.

All eyes were glued on the chef, and our group was mesmerised by him as much as by the food. Delicious, flavoursome and healthy is a winning combination in my book, and the proof was in the pudding, as they say, as we polished off our plates before the next serving was placed on it. 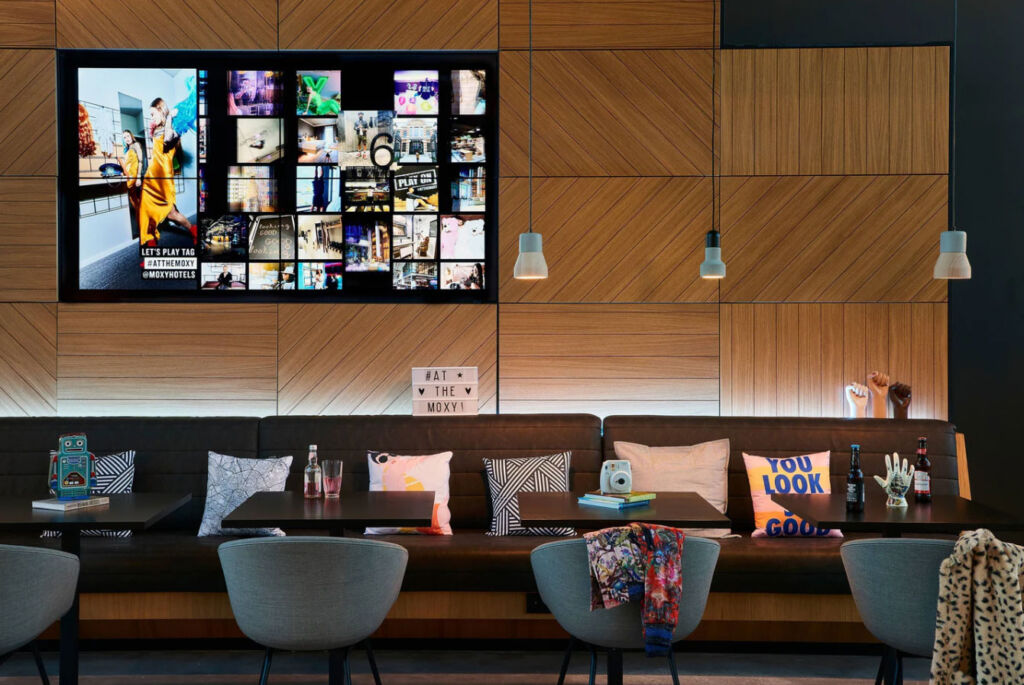 The City
Chester itself is a fascinating city, not least because the Romans considered it their capital because of its strategic position on the edge of the Celtic Badlands. It wasn’t to be, but remnants remain to this day, especially the city walls, which are the most complete circuit of Roman and medieval city walls in the UK. It’s worth walking around them to catch a glimpse of some of the city’s major sights. 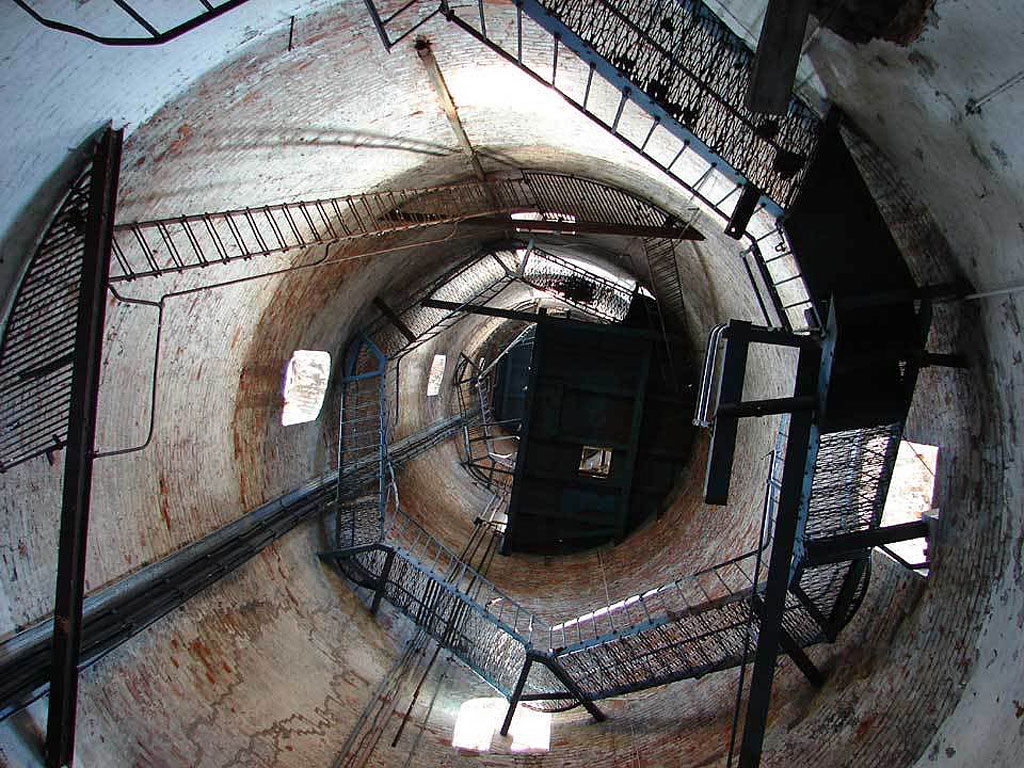 Another opportunity to take in the fabulous views of the city across the surrounding countryside and towards the Welsh hills is by climbing the tower of Chester’s 11th-century cathedral. It’s undoubtedly the city highlight where tourists can take a Cathedral at Height tour.

The city itself is a mix of high-street names and individual boutiques, as well as a network of open galleries at the first-floor level of the main streets. Some shops, such as the Roman hypocaust in the Bridge Café & Bistro, even hide ancient artefacts. 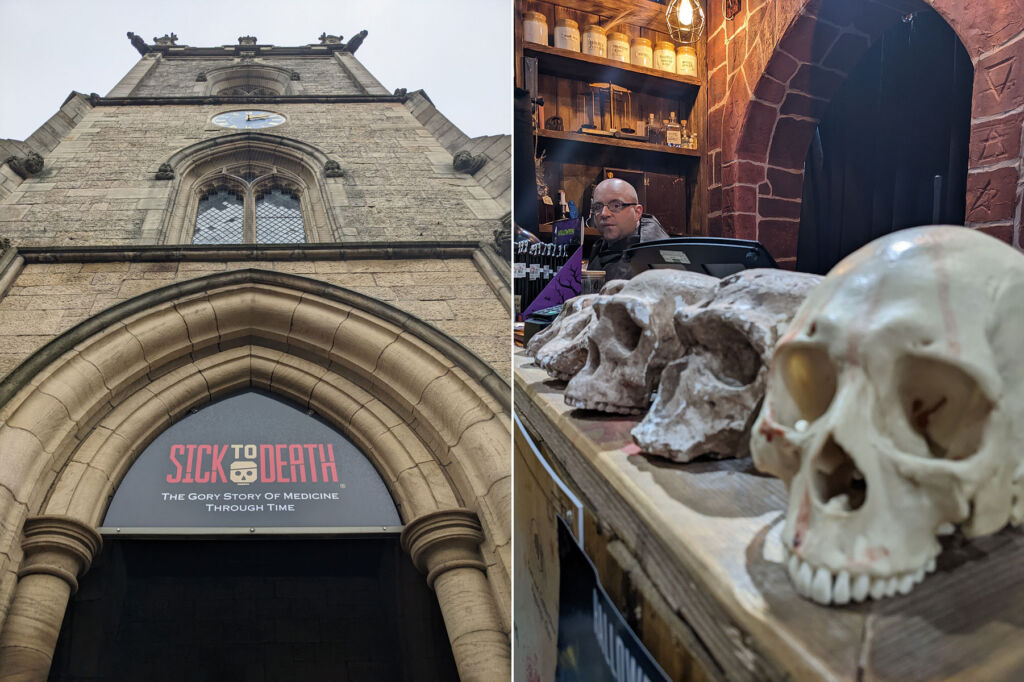 As someone who has always been fascinated by health, I was drawn to Sick To Death (opened in 2021), an entertaining and interactive new museum that tells the gory tale of medicine through time. Think bad smells, gore, science and plenty of discovery. You need to have a strong stomach and a curious mind to enter this place.

It was fascinating, albeit gruesome at times, to learn about some of the practices which helped form an understanding of the human body as we know it today. With death seemingly lurking the minute one fell ill, I’m grateful I wasn’t born in that era.

Moxy Chester – Where and How? 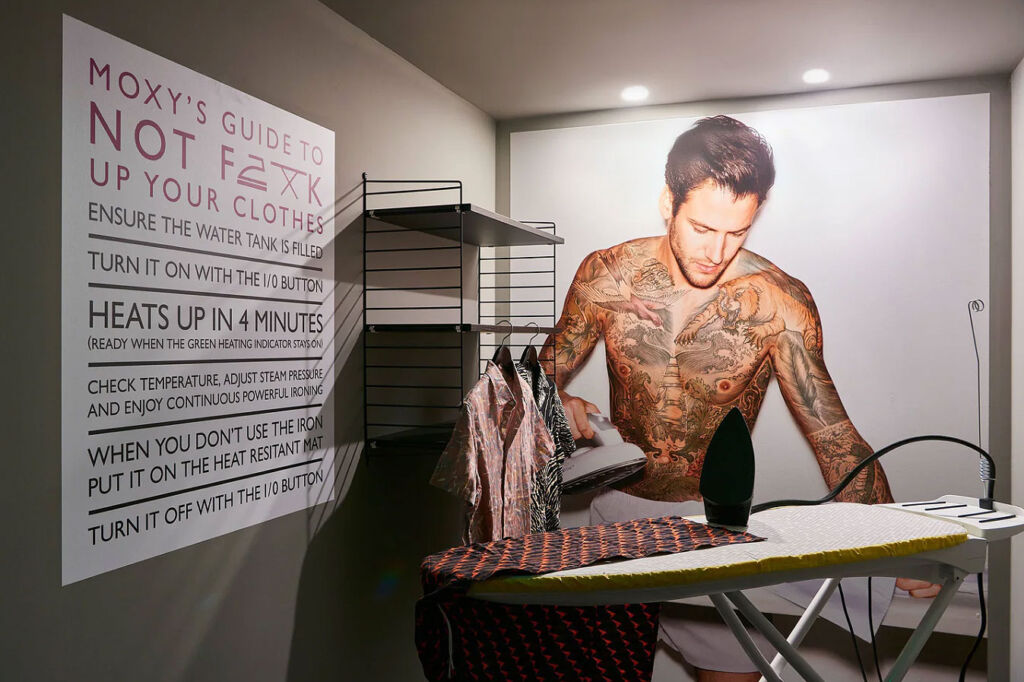